Peoples do not judge in the same way as courts of law; they do not hand down sentences, they throw thunderbolts; they do not condemn kings, they drop them back into the void; and this justice is worth just as much as that of the courts. - Robespierre, 1792

I could really give less of a damn about politics at this stage in life but can we just get humble and down to earth people in office? Or do good folk naturally not seek office and leave it for the vermin of humanity to infest and corrupt?

Capital poses an existential threat to humanity which has to be destroyed as soon as possible. If we can acknowledge this, we then need to sober up and come to grips with the fact that social democracy is ultimately just a compromise and we cannot afford to compromise as a class in the context of looming climate catastrophe. We will see fire and fury like the earth has never seen before and capital will fuck us over in ways we couldn’t even begin to comprehend at this time if we do not ensure our interests as a class. Remember that Coronavirus is only just a dry run next to climate change and with the entire basis for capital being self preservation and a narrow, shortsighted, survivalist mindset, capital will work their hardest to ensure their own survival at the expense of everyone else.

“What’s more painful? Being left at the altar or being a mistress?”

“Do we really have to compare? Because there’s no comparison. Can’t we just agree.. that we both got hurt? That’s it. End of story. Period.” 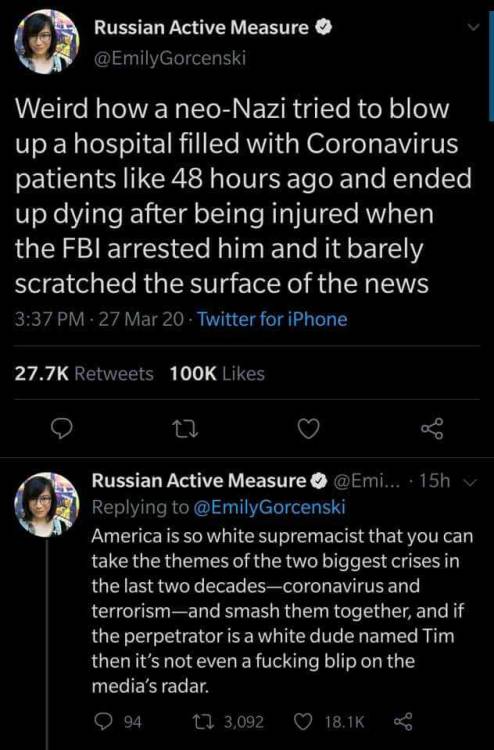 The oligarchy is inevitable kids

Every political system is an oligarchy, in history of humanity, always have a special group in power. When you understand this, you will become an anarchist, a fascist if you are right wing or socialist/communist if you are left wing. Democracy liberal is control by the bourgeoisie that owns the parties; is the oligarchy most stronger today, the aristocracy is still alive, specially in Europe, they own a country like Lienchestein but not is powerful like when was ours masters.

Any person that thinks that can eliminate the oligarchy need make more journey in politics hell, like me.

Sometimes it’s not the person you miss, it’s the feeling you had with them…

landlord: this is …. seven tarantulas and a peach

me: i need change

tfw u hit em with the “humans are the REAL virus”

I thought we could do something for everyone.Turns out everyone doest want to be a part of everyone

Find those who live under your landlord, refuse to pay. Alone we are victims to our system, together we are strong

People collectively break you and you’re left to put the pieces back together by yourself.