Leo pushed open the doors to the library to find Corrin so engrossed in her book she didn’t so much as glance up at the sound. The low light of the candle bathed the quaint room a warm, flickering glow. It coloured Corrin’s cheeks in a subtle golden that Leo almost mistook for a blush. That is until he stepped into the room. The door clicked shut behind him and Corrin jolted in her chair, stealing her head out of the book, snapping it shut around her fingers. Her eyes were wide and panicked before realising who it was, and she sighed.

“Gods, Leo,” Corrin huffed. She settled into her chair again, curling her long legs beneath her. “You scared me.” She touched the back of her hand to her cheek as she breathed out a long puff of air, turning her look of panic into a pout.

Leo studied the pink on her cheeks, finding that it was definitely not a trick of the light. She held the book tightly to her chest, still closed, her fingers drumming aimlessly on the cover. Leo couldn’t help but wonder if that was the cause of her sudden panic. There were only a few things she could be reading that would bring such an adorable flush to her cheeks, and each was equally amusing.

“My apologies, Corrin,” Leo said, strolling into the room. He suppressed a smirk as his gaze drifted to the book in her hands, an idea slowly brewing. “I didn’t mean to disturb you from your reading.”

Corrin shifted under his gaze as if she’d suddenly discovered something hard beneath the cushion of her chair. The pink tinting her cheeks only grew. “That’s okay,” she said. She met his eyes with a tight smile and Leo almost snorted. She was never good at withholding her emotions and seeing her struggling to smile, to swallow her obvious panic, had a laugh building in his chest. There was no way she wasn’t reading something dirty. The blush on her cheeks, the way she fidgeted under his gaze, everything pointed to it.

And it was absolutely hilarious. Leo would stoke this for all the reactions he could get.

“Let the dream begin, let your darker side give in”

I watched phantom of the opera, and wanted to draw leorrins in similar outifts. i can’t say it’s an AU because Leo’s not a psycho like Erik but not as boring as Raoul either lmfaoo 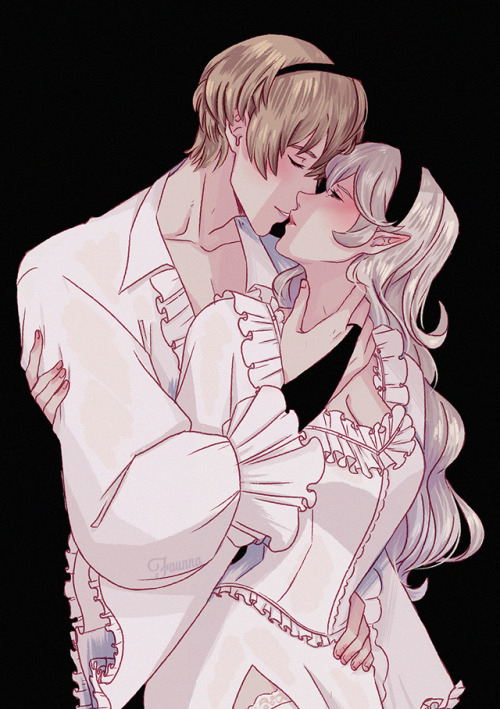 #fire emblem fates, #leo (fire, #corrin (fire emblem), #leorrin, #leokamu, #my art, #i mean i know Leo will (and has) murder people for Corrin, #but I like to think he’s above kidnapping and making psychopathic murals of her LOL
319 notes · See All
kotalinesPhoto

My full illustration for the @leorrinfanbook! I did vervain, which can symbolize enchantment and protection from enchantment, so I drew Leo and Corrin in a way that highlighted the Vallite curse and Leo’s use of magic to protect those close to him. 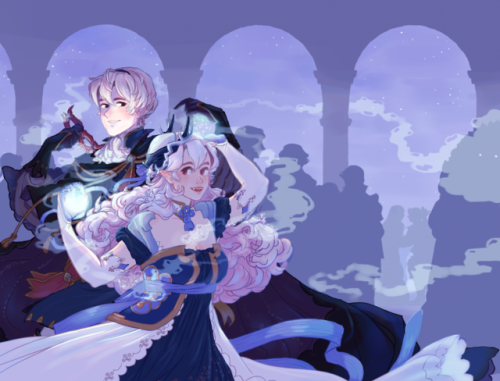 My preorder sticker design for the @leorrinfanbook, which is open for preorders until the 20th of March! I really wanted to make something super colorful and cheerful to contrast the mood of my zine illustration. 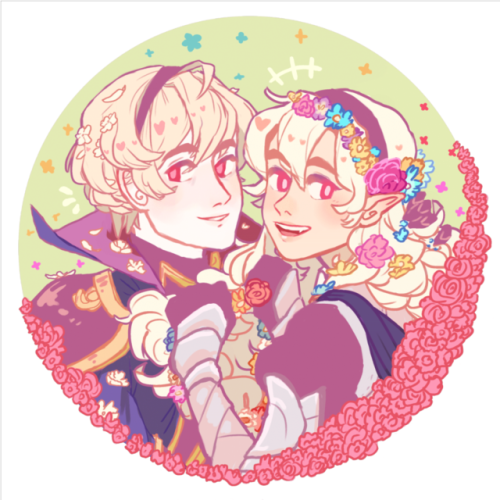 A Commission for an anon on ko-fi! I hope they somehow see this uwu idk how to contact them. Commissions are currently CLOSED.

He makes eye contact with her from across the camp, when she just happens to glance up from her book. It’s not a tactics book, that much he can surmise, and he supposes it is okay that she takes a break from her learning every now and again. Corrin has worked so hard recently, what with the war and her desire to solve every single member of her rag tag army’s problems.

“Why do you look so sad, dearest Leo?” Camilla asks, settling beside him at dinner one night. She too has a book, one with a cover so strikingly similar to the one he’s spotted Corrin with.

“No reason. I suspect I’m not getting enough sleep. What are you reading?”

#leokamu, #kamuleo, #leorrin, #corrin fire emblem, #leo fire emblem, #commissions, #I think I know who the anon was but I'm not certain but either way. I love you!
20 notes · See All
kamuleo-leokamuAnswer
are ya takumilla shipper??? owo if yes then wow kamuleo n takumilla is a++++ ily any stuff for them going ona double date ?? - 🍰

I really enjoy the dynamic of Takumilla too!  They’re both strong personalities who make it easy for me to multiship them, but frankly Takumilla is my favorite pairing for both of them.

I haven’t really thought about a Kamuleo/Takumilla double date before now, but that sounds like it would be comedy gold. Thanks for the ask, anon!!

Again, thanks for the question, because I had a lot of fun envisioning this!  Feel free to ask if there’s anything else you’re curious about! 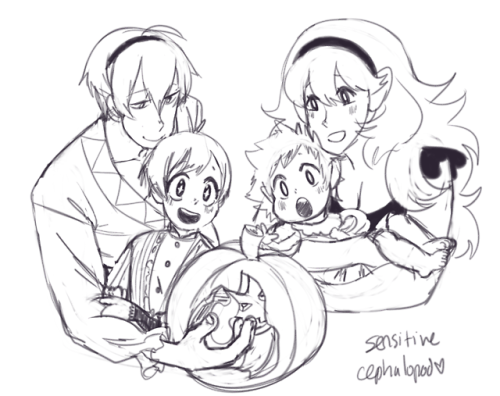 A wip and brush practice 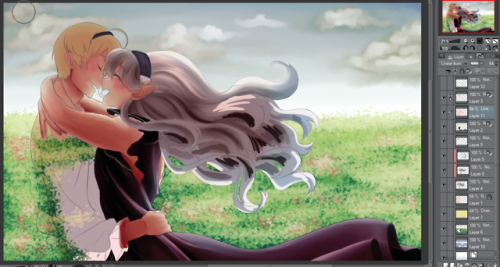 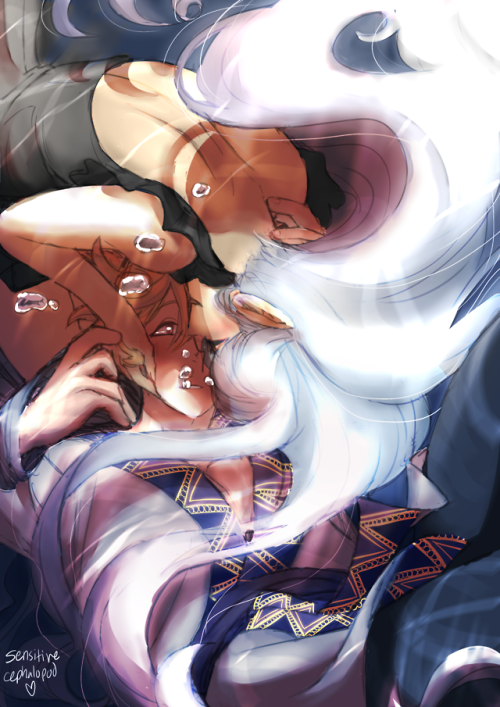 Summary: Corrin, a well known fantasy author, moves to a quiet seaside town to escape from the sound of the city. It takes her mere hours to discover that her new neighbours are a little odd.

Let’s go get away. 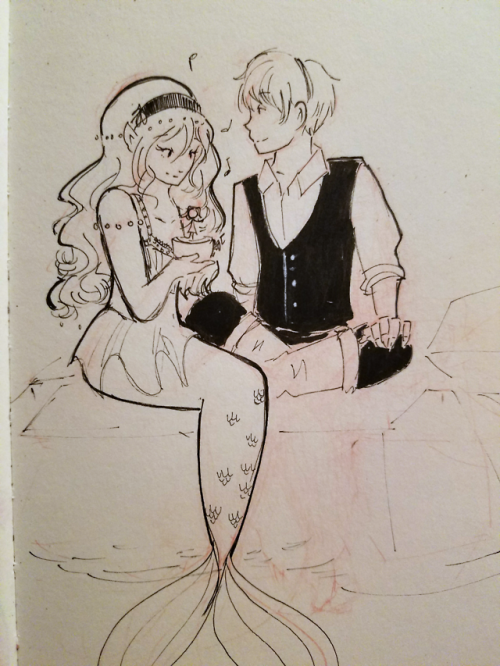