Happy pride month to all my

And anyone else not listed or still figuring it out!

Do these people seriously think that after being illegal, sent off to camps, murdered, raped and persecuted for centuries yet still standing we will be “taken down” by their middle school bullying tactics? I have to laugh.

I only heard about this right now, so please signal boost this!! Apparently, the Philippine government doesn’t look at petitions, so if you have time, please consider emailing. Details in the pics:

But also just a reminder, we haven’t forgotten BLM and Pride, we’re unfortunately just adding onto this. We will always be here to support, hopefully, you also will. Be careful, and stay safe!

it’s officially pride month, so let me recommend some of my absolute favorite lgbtqia+ movies for y'all in case you want to do a marathon. 🏳️‍🌈

1) imagine me and you (2005) - wlw movie about falling in love at first sight. rachel and luce lock eyes at the alter and instantly fall in love, the only catch is that it’s not their wedding they’re at. my absolute favorite romance movie. plays on the whole ‘soulmate’ trope. very sweet, only a bit of angst. happy ending. poc characters are almost non-existant tho.

2) love, simon (2018) - mlm movie about two boys falling in love online, the only catch is that they’re anonymous. very funny and sweet, a bit of angst and blackmailing which might be stressful to watch. (the friends are absolute trash to simon though, there i said it.) simon’s mom is the mom you always wished you could have. happy ending. poc main characters and a jewish love interest!

3) moonlight (2016) - mlm movie about a gay man growing up in miami. very emotional and poetic, but there is homophobia and an abusive parent and drug use. happy ending. entire main cast is poc!

4) catfight (2016) - i almost don’t know how to describe this film. it is told in three major parts- the first, second, and third fight. it does involve a lesbian main character, but her sexuality is not a main point of the film, her awfulness is. in fact, it is the main highlight of the movie- her awfulness, and the awfulness of everyone around her. it seems to have been created as a response to the political and social climate of 2016, and it shows. no real angst or homophobia is shown, but anger is very present. anger is the backbone of the movie. happy-ish ending. a poc main character. can be watched on netflix!

5) lez bomb (2018) - wlw movie about a girl bringing her girlfriend home for thanksgiving to come out to her parents. very cute and hallmark-y, but there is some angst involved. mild recreational drug use. happy ending. next to none poc characters.

6) la llamada (or 'holy camp!’) (2017) - a spanish christian musical movie involving a girl who falls in love with a nun and a god who sings whitney houston. set in spain. very cute friendship between main characters. mild drug use shown and the d*ke slur is used once, but by the wlw character. happy ending. can be watched on netflix!

7) closet monster (2015) - a growing up story about a gay teen escaping his abusive family and town. very artistically shot and beautiful, but full of angst. homophobia is most of the movie, with the father being a main antagonist and a homophobic hate crime being mildly shown at the start of the movie. most likely not for the sensitive of heart. happy-ish ending. almost no poc characters at all.

10) anna and the apocalypse (2017) - a christmas zombie apocalypse horror movie musical with a lesbian main character. it’s a doozy. made in australia and with one of the smallest budgets and box office returns you’ll ever see, it’s not exactly the most popular movie on this list, but it’s definitely the most outrageous. catchy musical numbers and fun friendships, this movie will almost make you forget that you’re watching the world collapse around these characters. no real homophobia or angst. happy-ish ending? almost no poc main characters.

Im happy to say I am a proud and out ace lesbian and I am here to show both vocally and silently for you. It doesn’t matter if you are out, closeted, or still figuring it out. I hope you all have an amazing but safe pride.

Btw I just wanted to thank everyone who has reblogged by pridefall post!! I know I’m such a small account but I wanted to make sure that everyone was being careful and knew what was going on!!

We’re proud of our team, our work and all our followers they continue to make a change in the world.

As always, If you’re not ready to accept our team and followers for who they are; please hit unfollow.

Hope all my lgbtq peeps are staying safe. It’s a shitty time, especially for those where this is their first Pride. It’s okay to be frustrated and upset but just know that there are people out there who care and wish the best for you.

This goes out double for all the LGBTQ people of color out there. It’s a hard time and “stay safe” might sound almost like a joke right now. There’s so much I wish I could do to help. Take care of yourselves, and we should all try our hardest to take care of each other.

Goes without saying I’m sure, but this includes all my wonderful nonbinary, asexual, and aromantic siblings out there. My heart goes out to you beautiful people.

(TERs and MAPs, fuck off)

Respect to trans men who bind, I’m just wearing a simple sports bra thats a little too small and I’m struggling to breathe, so I applaud y'all, keep killing it my dudes

It’s Pride Month, so I hope y'all will enjoy this overload of LGBTQIA+ art and if you don’t then get off my blog

Here’s the first piece to kick off the month

Love is Love and Love is Universal

happy pride month to all my lesbians mwah 💖

Around this time last year I realized I liked women too. And we’ll any gender…

Recently I have realized I am also 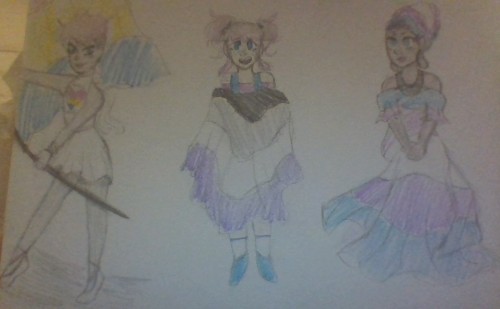