🤣🤣 ‘Your words sounded QUITE genuine’

One of THE best endings ever! (also good word of advice to never make those kind of remarks about Hetty!)

‘This is Felix, he’s almost like a second son to me’

I really miss Hetty right now!!! 😢 Season 12 really needs to be so much better then Season 11! 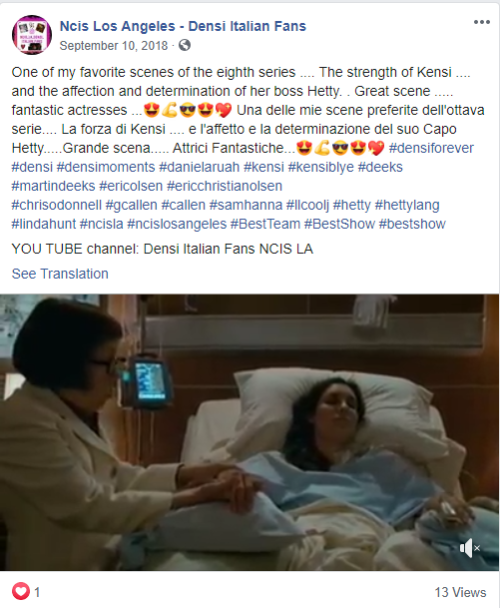 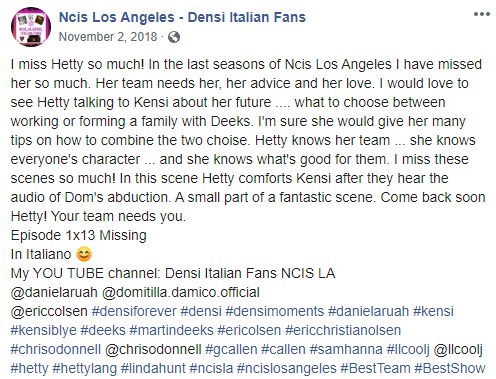 We need more of Deeks and Hetty scenes in Season 12

1st part of the ending that I absolutely love:

Hetty showing up in that hot flight gear!! 😍 and of course, Sam lifting Hetty in his arms and kissing her!! ❤

S10′s reopened a box of feelings I had previously stashed away a month before and eventually led to me hitting rock bottom for the next 2 months until the Densi wedding. (don’t ask. I really missed Hetty)

S11′s shouldn’t even be called a Christmas episode because well, you know why.

Also, Hetty not being in any of them also adds to the hurt.

LOOOOLLLL!!! Neric getting caught jingle belling in the burn room! (I really miss Hetty doing that.)

Post Collateral thought: That life chose you Hetty, because it knew that you’re just the right amount of tough and sweetness to handle it!

Ah, Mama saving her boy. always going to love it!!

Neric talking about Hetty in such a sweet way, IS SO AWESOME!!!

NEVER, try to spy on a former spy! (especially if it’s Hetty!!) cuz you’ll be thrown off your game a lot faster then you can count!

Ah, Callen being so worried about Hetty. love it! (not sarcasm, mind you)

I know Hetty meant surfboard wax, but still. hearing her say ‘sex wax’ is so amusing!! and unexpected.

The ending of this is a bit weird, but hey. it’s Hetty. (plus, FB fans LOVED this episode!!) (if you go to those old Hetty memes on LA’s FB page, there’s quite a lot of positive reaction!)

and the beyond iconic Nicuranga quote!! (I just love that about Hetty, you think you know her, then 1 minute later, she says something like that!)

‘Either play or get played’, so many good Hetty quotes in this episode!! (and that was one of the rare moments in the early seasons when Langer ACTUALLY got along.)