Took a trip down memory lane while visiting Pixar’s website this morning and I caught myself looking at the Cars 2 page. From there, I watched all kinds of behind the scenes videos on how the crew was going to bring this amazing film to life. And I spotted this adorable gem right here! It’s concept art of McQueen, Mater and all their friends driving down the streets of Tokyo!

Believe or not, this was used the cover of The Art of Cars 2! 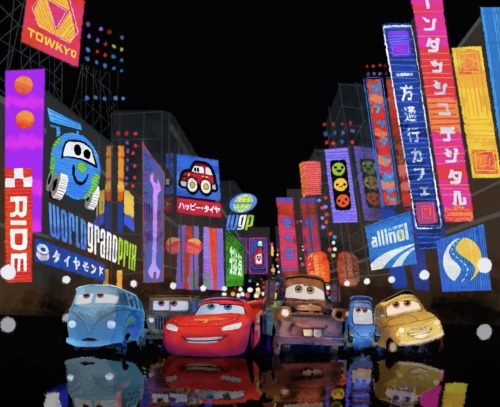 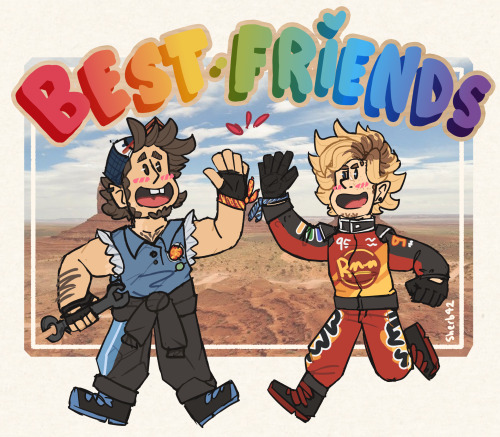 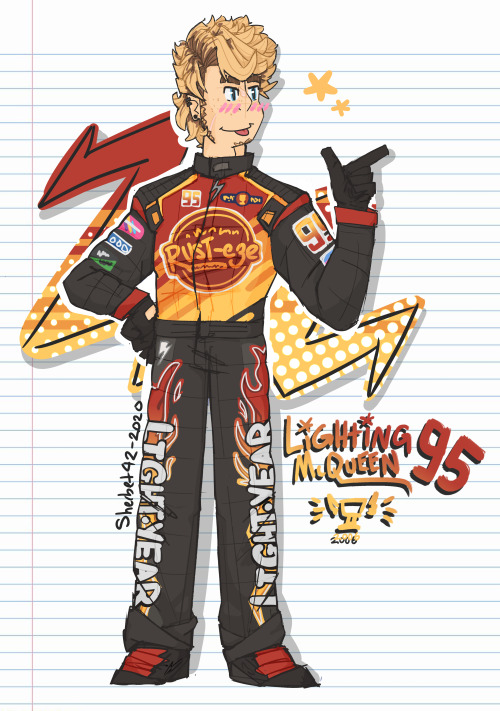 “I’m faster than fast, quicker then quick, I am Lighting!” “My name’s Mater. Like Tuh-Mater but without the tuh!”

Welcome to the first Throwback Thrusday of September 2020, ladies and gentlemen! And boy, do I have another special DVD from my childhood to show you today! Now on todays throwback episode, I decided it was time to head on out to Route 66 and visit the good old town of Radiator Springs in Disney Pixar’s Cars.

Cars was the one Pixar film everybody loved, including me! In fact, my first experience with this amazing franchise was actually from watching The Incredibles on VHS and it even came with a tiny teaser trailer for Cars which was coming out in 2006 back in the day. Surprisingly enough, this teaser was the first time I met McQueen and Mater. And well, I was pertty much turning into a Cars fanatic. When Cars came out on DVD, me and my family watched it together and I really enjoyed it! Especially the short film, Mater and the Ghostlight.

Cars did take over my life but I didn’t really collect any of the figures or playsets. The things I remembered I had from the movie was a figure of Dirt Track Racing Lighting McQueen, two keychains of McQueen and Mater that were flashlights, V. Smile and Leapter games, a little golden book that retold McQueen’s story, another book called Thunder and Lighting that recalls the events from the Dinoco 4000 along with a small comic book retelling of it too. I still remembered my dad read it to me all the time. And I even had a Cars themed birthday party all the way back in 2006! Man, makes me wish I still had those Mater party hats… But luckily in 2010 and 2011, I suddenly found myself obsessed with Cars franchise, Mater and everything the world of Cars had to offer me! Guess you can say the rest was history.

But let’s get back to the first movie, I am EXTREMELY OBSESSED with it! I love it so very much and Mater never fails to make me laugh. Also, I adore the other characters too. Lighting McQueen and Mater are both my favorite heroes, they were my childhood heroes growing up as a kid and I still love them! ;)

I got the first film all the way back in 2011 at Target when me and my family were going on a huge trip to go see our grandparents and our cousins and of course, I wanted to have something awesome to watch so I picked Cars and Cars 2, hinting I still remember I loved listening to the second films soundtrack in the car. But other then that, I have seen Cars so many times that I even know the entire thing by heart! Isn’t that crazy?

Cars will always hold a special place in my heart because not only am I obsessed with this film, I also love this Pixar franchise so much!

Also, McQueen and Mater wanted to appear in the picture too beside there first film. Basically, I am a nerd of all things Pixar and I am extremely proud of it! :) 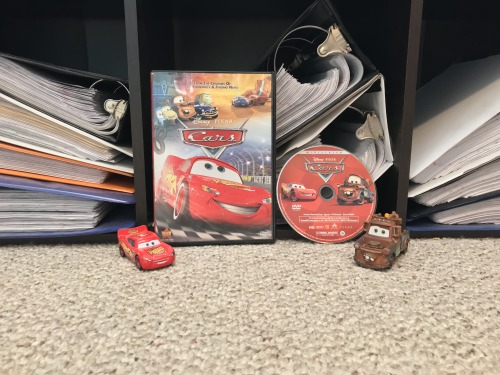 Lighting cars 2 : thats why i love you sal

Am I thinking about a Life on Mars au where Lighting has a crash and wakes up in the 50′s? Yes. Does it just devolve into Lighting trying to deal with a young Doc? also yes. 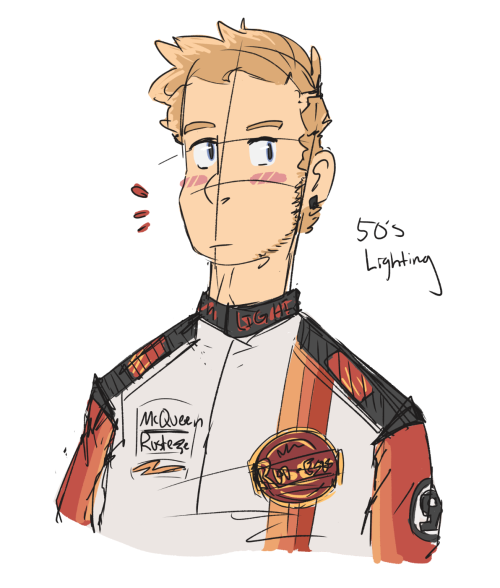 #like 40% of the fic is him getting used to having short hair for the first time in his life, #cars, #lighting mcqueen, #my art, #sketch, #head empty many au thoughts
33 notes · See All
one-time-i-dreamtText

Lightning McQueen was on a track team with people. He was in a race against another school on Saturn and the race was on the planet’s rings.

Can someone please give me more cars 3 lighting x storm, like please?! It’s such a good ship but so disregarded.

So relevant to the last post, I do have to say that currently I am really finding the overlap of OCD and C-PTSD very amusing because as it is, due to having OCD, I have a lot of repetitive tracks going on in my head randomly.

Some are more graphic and concerning like repetitive rambles about my insecurities, or questioning my quality / moral standings as a human, or images that make me worried I did something bad or images and thoughts about having not washed my hands enough to be safe or, recently, very graphic images that in itself aren’t flashbacks but are very easily able to trigger memories.

Those ones it is very vital for me to not feed into. They aren’t fun to think about. They aren’t typically productive. They usually aren’t based and they usually jsut get me into very bad mental health spirals, damage my self esteem, gaslight myself, and do just a lot of bad. I was in treatment for OCD longer / before I was in treatment for DID and I’ve learned a lot to get better at not tending to the problematic repetitive cycling thoughts.

And since it has been going over and over for several hours now, I have spent the past several hours really working to *not* look at the graphic images and *not* pay attention even when it zooms in and tries to add my sensory details and to just not feed into it and cater to the thought on the account that if I paid more attention to it, it would 1) Worsen and elaborate the obsessive repetitive thought and concept 2) Capture me deeper into the cylcing circle and 3) Definitely trigger me into an actual flashback

And I do notice it is interesting that my mind can cycle not-personal triggering items and images in my mind without innately triggering me as long as I treat it like any other OCD intrusive thought, but can add the caveat of having his best friend next door PTSD add weight to it.

I’m honestly glad for the most part I have a lot of experience dealing with intrusive repetitive thoughts and have only really had limited miniture flashbacks because ThankYouGroundingTechniques, but it is a bit amusing / interesting to see the two dysfunctions work together.

It is even more amusing to see the same function working against it though - as seen in the previous post about how Lightning McQueen is really replaying in my head and sometimes blocking out the graphic images - and just kind of laughing at how weird my mind is.

Man though, co-morbid mental health is a trip sometimes. Also man its been ages since I talked about my OCD. 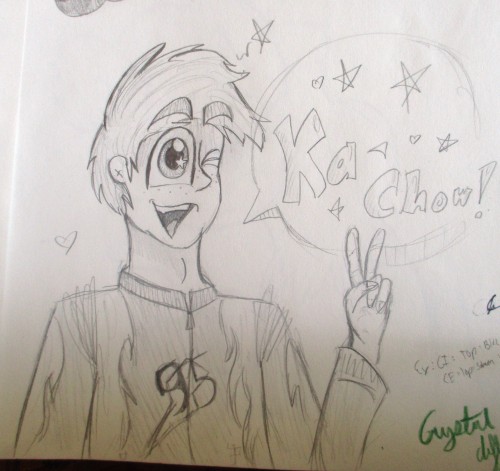