Me trying to draw Loki Laufeyson.

My “About Loki” Blog is on Tumblr!

I thought about this a lot and finally decided to do it.

Given my initiative to write my book and the amount of good and bad information that I have found along the way, this idea arose to create a blog exclusively with information about everything related to Loki.

It will work by answering questions and generating as much information as possible to shed light on the true nature of our God.

At the same time I will be publishing advances about my protecto “I object”.

AN:  there are probably English translated lyrics somewhere in the comments, I’ve been listening to a lot Icelandic music today and I really like KALEO’s cover of  Vor í Vaglaskógi

SUMMARY: Young Loki doesn’t know how to talk to girls.

Loki focused on her, the servant’s daughter. The way her father held her made the boy feel things, was it envy? Curiosity maybe? His father never played with him or Thor like that. Loki didn’t know the girl’s, he wasn’t going to ask. He watched her father playfully toss her into the air before setting her down, Loki’s cheeks redden at the sound of her giggling. She sounds so happy, a small smile appears on his face. The girl and her father pick daisies together, he sighs.

He stiffens and immediately turns around, pretending as if he hadn’t been staring at the two playing. He knew it was rude to stare, his mother always said that it wasn’t nice. His face felt hot, his stare burning holes into his mother’s dress.

Loki held his breath for a moment, he felt a tad embarrassed for having been caught watching the servant’s daughter. It wasn’t the first time he did it.

Normally it would be Thor who caught him, Thor would also pick on him for it.

‘‘Why would I want to play with some stupid girl?’‘

Loki did in fact want to play with her, whoever she was anyway. Thor leaves him out of his games, goes on adventures without him.  Thor says Loki is too small to play with him, Fandral and Volstagg. That Loki wasn’t strong enough, he hated it. His relationship with his brother used to be better than it is now, Loki wasn’t sure what happened to him. Somehow after his name day he became obsessed with weapons and training, going off to watch the new guards training. Loki remembers seeing Thor imitating them with a dead branch, many times. He sighs, Loki at this point had nothing and no one. Just the library and his mother, he couldn’t sit by her and watch her knit all day. That’s boring.

‘‘Her name is Y/N, her father just began working in the kitchens. I’ll bet she has no friends yet…’‘

His mother knelt before him and gently turned him around.Loki watched her. Y/N’s father holds her hand and smiles at something she said, a crown of white daisies rests atop her head. He leans back against his mother, Frigga rests her chin on his shoulder with a hum. Loki couldn’t do it, she probably wouldn’t want to be friends with him. No one did, if Thor didn’t want to play with him then why would she?

‘‘Don’t keep waiting for her to see you Loki…’‘

“I have many names and come in many forms. I am the fire in your fireplace, the sky treader, the Wildfire, The Trickster..

But I am best known as Loki.”

So I heard it was #worldbookday2020📚 I decided to show these books: #gospelofloki and #testamentofloki by Joanne Harris and #norsemythology by @neilhimself . These books tell all the best stories about my #pagandeity Loki and I seriously recommend them!

So new photos from the set of Loki leaked…and let me just tell you this looks it’s gonna be some kind of procedural type thing where he’s gotta help out a certain organization, AND IM FUCKING EXCITED.

A late birthday present! The prompt was pretty Loki

Me:loki I know I’ve been very busy, got my dream job I just want a shoulder to cry on.

“ a ship journeys from the east, muspell’s people are coming,
over the waves, and loki steers

there are the monstrous brood with all the raveners,
the brother of byleist is in company with them “ 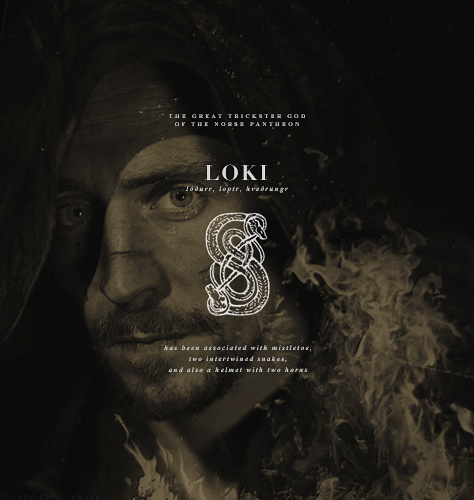 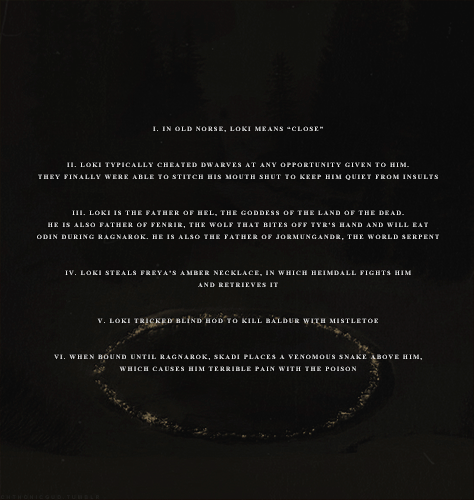 #I'm in one of those moods again, #Loki deity, #loki laufeyjarson, #lokean
55 notes · See All
lokideityofclownText

maybe you’re not so bad after all, brother. maybe not.

So I was thinking - Crowley and Loki would make one heck of a duo, wouldn’t they. Enjoy this mess that is me trying to write in present tense.

Two immortal beings with a strange fondness for snakes and quite the cynical attitude towards authority, which they have acquired thanks to years and years of belittlement and ridicule, walk into a bar. Not together, separately, about fifteen minutes apart.

Loki and I got engaged this morning

I proposed and He said yes

…and it still doesn’t feel real

Today’s the day.
It’s offically been a year since I first prayed to Loki. A year since I first became a pagan.
It was a crazy year. Hectic, to say the least. Is some of it Loki’s fault? Hell yeah. But I don’t regret praying to Him and welcoming Him into my life. Not one bit.
I couldn’t have anticipated what Loki would eventually mean to me. He’s more than just the deity I pray to, and I plan to go more into that in March. March is an important month for me and Him, anyhow.
Either way, I love Loki tremendously. Sure, He can be a complete pain in the ass, but at least I can say that He’s my pain in the ass.
Here’s to many more years with Him. Happy yule.