*Adds mine to the pile* 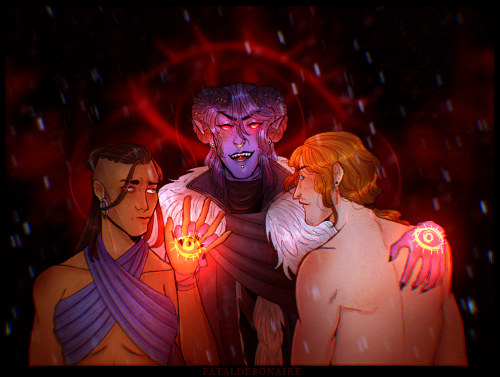 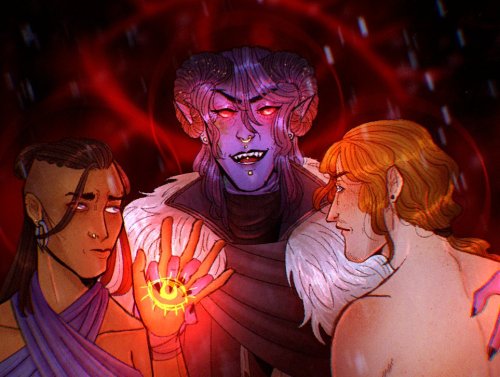 Lucien and The Tombtakers: *passes off their alcoholic beverage/stew as just “a drink meant for chewing”*

Look, I’m not saying Lucien is some weird version of a beholder merged with tiefling but he does have that ability:

He has several other eyes that do weird shit.

And the Tomb Takers use deep speech.

The book that the Empire Kids were reading had a super heavy House of Leaves vibe to it with the way Matt described it. That was an intense description.

And the scent of her power is “roasting chestnuts and crackling fires”. If fic authors needed it.

Tbh I think Lucien has made the Vital Mistake™️ almost everyone who encounters the Mighty Nein makes, and that is underestimating Jester.

Like, so far Lucien’s interactions with her have been:

*saying her life goal is to domesticate unicorns

*sending him a message asking if he was a baby once

And just generally seeming weird and sweet and a little dumb. And it’s not like she isn’t open or caring, but she certainly isn’t just that. Lucien has made the mistake of assuming that’s all there is to her, a bit of power but not enough brains to use it well. Childish. Trusting. And it’s gonna come back and bite him in the ass.

Jester isn’t manipulative in the way Lucien is. She is mostly honest, genuinely kind and generous, and overall she is what she says she is. But she’s also extremely emotionally mature, an amazing strategist, and worships an archfey trickster god she practically made. She knows how she comes across, and while it’s not a lie, she always uses it to her advantage when she needs to.

And when she does lie or trick someone, it’s insane. The hag? Outstanding, mind blowing, dnd winning. And she’s so sweet no one ever expects this side of her.

So basically, because of all this, Lucien is gonna concentrate on the others and completely underestimate jester, right up until the moment he doesn’t and he’s fucked.

lol i don’t normally make original posts but im thinking about critrole and everything that’s happened with lucien & beau & caleb and honestly? i don’t think lucien can control them. he killed vess derogna since she was getting powerful and she got her extra eyes from reading the book. i think for lucien to be able to control them it would take more than just the book

I also don’t think molly is coming back in anyway. from a meta level i doesn’t make sense with taliesin having been playing cad for almost a hundred episodes and in game i think to destroy lucien it would also destroy molly. it’s sad but it just doesn’t make sense. even if molly is a fragment of lucien then how are they supposed to remove the other fragments? it doesn’t add up

i also really hate lucien. the more we learn the more i detest the slimy bastard. my girlfriend and i watched the new ep together and she had to deal with me swearing at him the whole time lol

I think people are allowed to have their fan casts, but sometimes I look at fan casts for the bat boys and Amren and Lucien and all I can think about when looking at them is

Like have I been imagining them as the wrong skin color the whole time?? Are they not POC or coded POC?

Excellent points all around

Me: Lucien is most likely very evil

Me to Me: HES JUST A PURPLE BOI WHO GETS LOST HELP HIM AAAAAWWWWWWWW okay, so Caduceus has been having some lingering Sentient Evil City dreams since the Vokodo fight.  Not somnovum dreams but the city itself has clung onto him and I just wanna know what would happen if Lucien knew, and if he would feel that his status as the Nonagon is coming under attack as the Mighty Nein get more and more entangled now that Beau and Caleb have started getting the eyes.  Considering what happened with Vess, I think since none of the three want to be the Nonagon or connected to the city Lucien could use this as a point of control in a ‘kill two birds with one stone’ kind of way.  He keeps a potential threat close where he can keep an eye on them while also protecting his status as ~The True Nonagon~ by promising that he has the power and/or knowledge to reverse it.  But on the other hand I think it would be super cool if Lucien was like ‘heir and a spare’ about the whole thing and decided to try and slowly bring these three into the fold as like Nonagons-In-Training so that way if anything happens to him again there’s always someone around to be the Nonagon.

In Conclusion: I just think it would be neat if Caduceus was evil and covered in eyes, still a chill dude, but he’s got esoteric evil plans too

At the end of the day there are so many things that us readers have had time to dissect over the years that I don’t think SJM even dissected to same degree we did lol.