Ahh, I love you. I feel better, lighter and my day has gone smoothly now ☺️

He tells me, “I’ll keep fighting to get to you.”

“All your dark thoughts,” he says, breaking away briefly from our kiss and gesturing with his arm as if he was warding them all off. 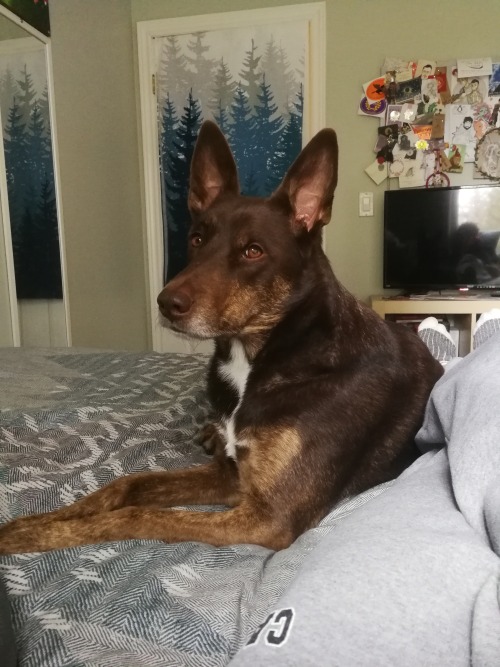 After signing a lot of paperwork and going over plans for the future, Gremlin and Luna were finally able to head back to Whispy’s with the last bit of light for the day fading away. They were both completely exhausted, mostly emotionally so, and all but collapsed once they got back. Luna flopped on to her couch while Gremlin leaned heavily against the wall. Sighing, Luna glanced over at him. “Are you ok? That was… a lot.” He half-heartedly chuckled. “Yeah, that’s a pretty massive understatement. I’m… better than I certainly coulda been.”

With a bit of effort, Luna sat up. “I know this isn’t an end to everything, but you did it, Grem!! You’re safe here now! You don’t have to hide anymore!” Gremlin smiled. “Yeah, I am, aren’t I? It doesn’t really feel real yet…” He glanced out the window, a frown forming on his face. This concerned his friend. “Grem? Are you sure you’re alright?” He shook his head. “It’s just… I’m not ready for all the attention I’m gonna get. I know I’m gonna be an oddity for people to gawk at for a long time.”

Frowning in response, Luna got up and walked over to him, holding his hand. “I know. And I know it’s gonna be hard. But you’re not alone. You’ve got me and Rev-” “That’s the other thing.” Gremlin interrupted. “I might be free to, y’know, live out of hiding, but Rev can’t. Not yet. I’m not gonna be able to see him as often, either, if I don’t want to bring attention to him.” That wasn’t even mentioning Beep, someone he couldn’t even tell Luna about yet. “Was this selfish of me? Getting my own problems sorted out while he’s still dealing with so many of his? And he needs me to help him, I know he does…”

Luna paused. She hadn’t really considered these negative ramifications until now. It took her a moment to think it over. “Well… People may be watching you a lot more closely, but you’ll still have time once it’s late enough at night, right? I don’t think anyone’s gonna bother you once they need to sleep.” He thought on that as she continued. “Plus, I won’t be getting the same kinda attention. I’ll be sure to check up with Rev when you can’t.” Gremlin nodded. “I, guess so, yeah… I don’t think you’ve ever called him Rev before.” She chuckled. “I guess I just figured it’s about time.”

“But most importantly, you shouldn’t think it’s selfish to work on your own life. It’s not selfish to look after yourself. And I’m sure he understands that.” Luna finished. Gremlin paused and rubbed under his shades. “H-heh, you always seem to know the right thing ta say.” She smiled. “It’s just what I think you should know.” Digging into a cape pocket, he spoke up again. “Hey, Luna, I know you’ve done a ton for me today, but can I ask for one more thing?” “Of course!” Luna replied immediately.

Taking out his amulet, Gremlin placed it on, instantly donning his human disguise and having to sit so he didn’t bump his head off the ceiling. “Can we have smores? As a celebration treat.” He asked. Luna grinned. “I’d say we definitely earned it.”