it’s been one year since ryouko and sakuya were added to the game, along with their event, オマエにずっと手を振る, which has so many translated names i’m starting to lose track! one of my favourite events nonetheless. looking forward to and dreading their reunion eventually!

There is no way I can get Tsubaki this event, but I think I’d like to choose her for my limited 4* whenever we get one of those bags next time around. I really, really like the idea of a mom magical girl/older magical girl. She’s got some flaws, but her positives outweigh them for me. Man, I wish I could read this event.

hi i see the tag poppin in the magia record tag about ocs so let me introduce: my self-insert because yes, we embrace that in 2021 dammit!!!

art commissioned by me:

Seeing everyone make voice lines for their OCs makes me feel really happy. I love that this game can inspire people to be really creative. AND PEOPLE HAVE SUCH GOOD OCS, I LOVE THEM AND WISH I COULD ROLL FOR THEM

Yesterday I went on a mad spree and searched all my supports and then various other people for memoria I’m missing. I wanted to share some setups I found.

….I’m… not sure what is happening here, but I have so many questions. Why only Tsuruno? Why not the girl in the “all” spot? Did they set it and forget? They had the Iroha/Ui dual unit, so they’ve been playing recently. So many mysteries.

WHY DO YOU NEED THIS MUCH EVADE

WHY SO MUCH EVADE AND PASSIVE HP REGEN????

Wh…. Look at all… all of those friends…. I feel scared, someone hold me. This person… is too powerful

The whole OC voice line trend has made me really want to start thinking of Doppel lines for the Premiere Nebula girls, and ironically, the most badass member of the team is going to have the least badass line. (Io’s mother was told she was dead, and her Doppel represents wanting to revert to the child she never got to be, so instead of doing a cool one-liner like the others, I imagine her calling out something like “Mom…I finally found you” as her Doppel comes out.) 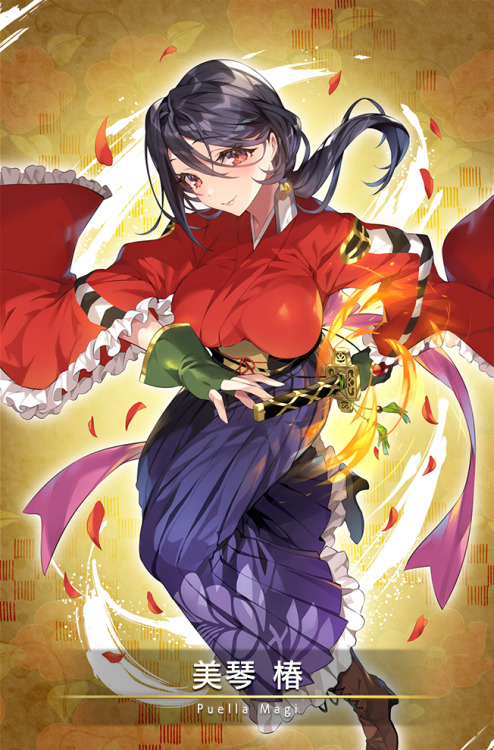 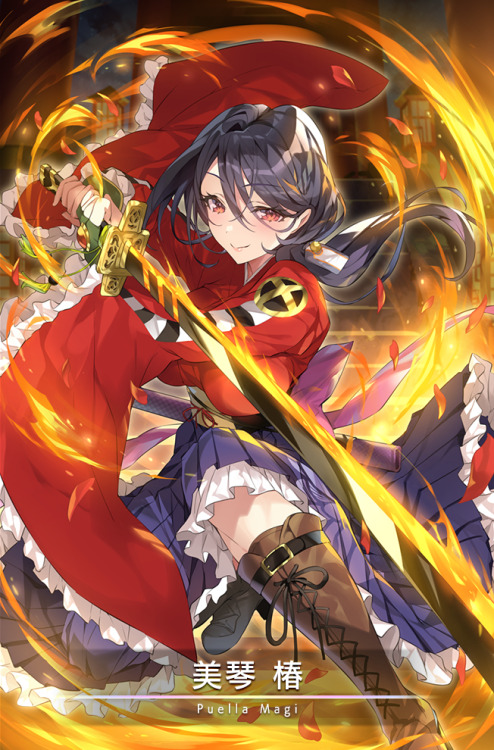 As such as I love Seika, I know she would have turned into a witch if the doppel system never existed. Follow by Mito and then Leila.

Why do I say this? Well…Look at the events of “See You Tomorrow ”. The only reason why Seika made her wish was to revive Leila and then immediately kept it a secret from them. (I suppose the other option if she did have one was to get over her social anxiety, but that’s another discussion for a different time) She didn’t want them to get involved with magical girl business so she decided to fight alone for a good while. She did this while dealing with the prejudgment people had of her. Eventually the other two girls caught on to what Seika was doing. By the time it happened, Seika might have been on the verge of becoming a witch herself or has collected a good amount of grief in her soul gem..

By the time Leila and Mito used their wishes to become magical girls to try and help out Seika…It might have been too late and she turned right in front of them. This would obviously shocked the two girls. One of two things could happen, Mito turned into a witch shortly afterwards unable to bare the grief of her best friend gone. Leila being the last one remaining ,unable to fight against her best friends witches and will get overwhelmed by grief…So she turns as well…Somewhere along the lines, the three witch merge into one.

The other option is Leila and Mito managing to defeat Seika’s witch at the cost of their emotional well-being. The two would cling onto each other and would try everything in their power to prevent another tragedy to happen again. Eventually one of the two girls would have turned and the last remaining would either get defeated by it or won ,but turned shortly afterwards…

Either way this would have been the tragic tales of three childhood friends taken advantaged by an awful creature. That could have happened in the other timelines with their counterparts. Thankfully there is one where all three of them are alive and well. The doppel system actually being there does play a good part of it as well. They could somehow retain the knowledge of their previous counterparts unconsciously and acted based on that, but I doubt it tho…It’s still a possibility nonetheless.

#magia record#another option could have been is Mito dealing with the grief of her lost friend turned once the prejudicemeants against her became too muc#seika kumi#ignore the misspelling on this...
19 notes
resident-normal-person
Text

And then I did Misha. I tried to make her tone come off as mature and (eerily) calm given she has similar mannerisms, thoughts, and personality to Kyubey, save for some of her lines since she’s not devoid of all emotion per say.

I think I did pretty alright:

Mel’s card art, including her uncap. She looks really happy in all of the art, but it’s like she’s glowing with joy in her uncapped one especially. 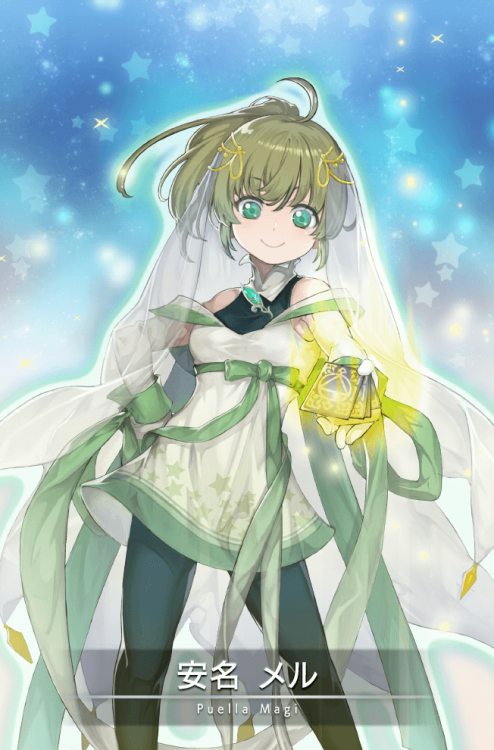 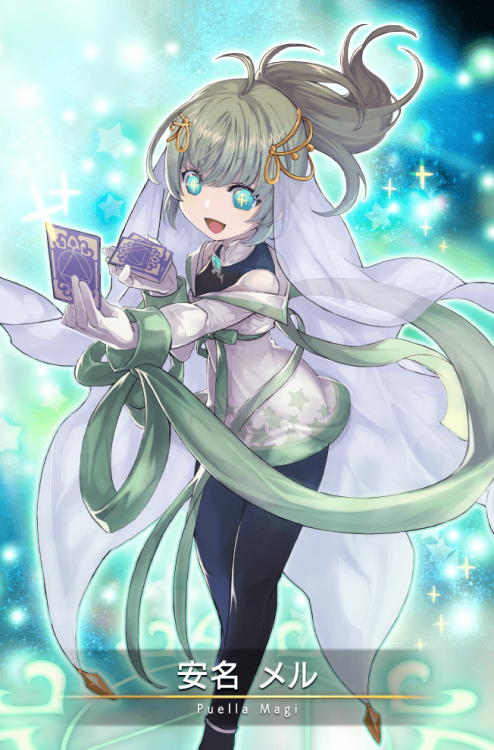 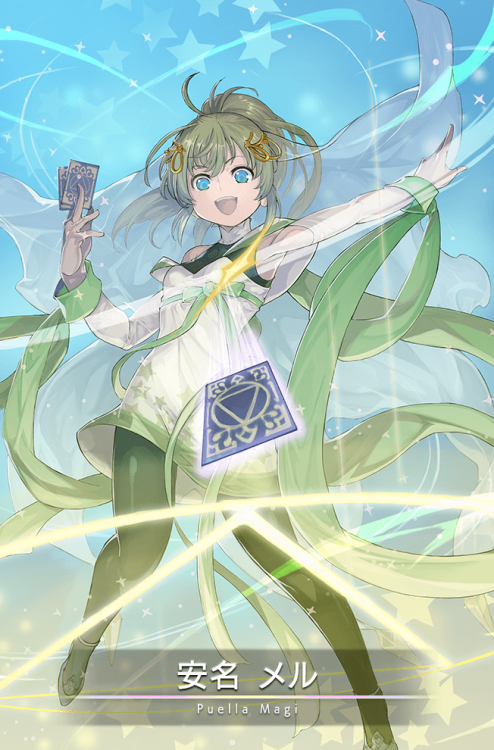 TLDR: Not bad for a 2* memoria, and good for new players. This will eventually become enhancement fodder the second you have anything better though.

Review: This is a very new-player or Free-To-Play friendly memoria. It’s easy to get as an unlimited 2* memoria, has a decent effect, and should be easy to max awaken. It’s not an amazing memoria– a three-star or a four-star memoria should easily outpace it even at one slot– but it’s a good start and can help a player while they gather more effective memoria when starting out.

A note on it’s effect: Damage Up is the same as the effect Increase Damage, though the game treats both effects as separate. Because they are counted as different effects, you can utilize both without worrying about hitting the 100% ceiling. Another thing to note is that Damage Up/Increase Damage will take place damage output, or be calculated after all the buffs/effects on the unit– while Attack Up will effect the unit’s base attack stats, making Attack Up a superior effect. However, Attack Up is very easy to hit the 100% ceiling. With all of this in mind, you’ll generally want a bit of all three damaging effects.

But overall, this is a decent memoria to start out with. Once you have some four-star memoria such as “I Made Friends” (link to be added) or anything else with Attack Up/Damage Up/Damage Increase, you can safely use “Reliable Mami-Senpai” as enhancement fodder. 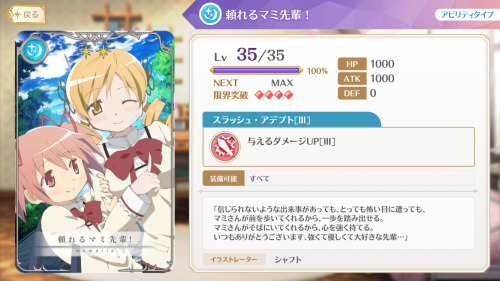 Admiration of Many Colors

TLDR: This is an excellent memoria for Charge teams, and will be useful for Kimochi raids. It qualifies as Whale Tier. "Admiration of Many Colors” is exclusive to the Happy New Year’s First Festival gacha. This is event memoria and should be kept in the case of a rerun.

Review: This memoria is excellent for Blast teams, and especially for charge-centric teams. In fact, some of the best use for this memoria will be on Kimochi raids which emphasize charged attacks into blasts. Before going any further, a quick explanation of the two effects:

Charged Attack Damage Up will cause the target to cause more damage from their Accele or Blast disks if used after a charge disk. You’ll want to use this memoria on the character who is using the charged attack, not the character setting up the charge disks.

Blast Damage Up is a straightforward buff that means blast disks will deal more damage. Blast Damage Up has a percentage ceiling at 100% that is surprisingly easy to hit.

Combined, this is a very powerful memoria for comboing a charged attack into a full blast combo. This is best used, again, for charged-attacks-into-blast teams that can take full advantage of the memoria. Pair this with an active that increases Attack Up, Damage Up, or Damage Increase and you’ll see amazing results.

This qualifies as whale tier. It will be good on supports, but only on characters with two or more blast disks. 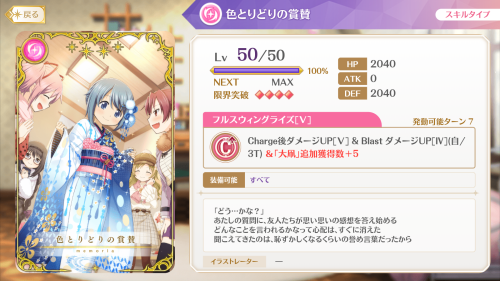