[Image: Little Yellow Bird and Handsome Pheasant dance wingtip to wingtip in their wedding finery. Below, they embrace in their regular getups, encircled by their rings.

… were married one bright summer day.

they were closer than ever.] 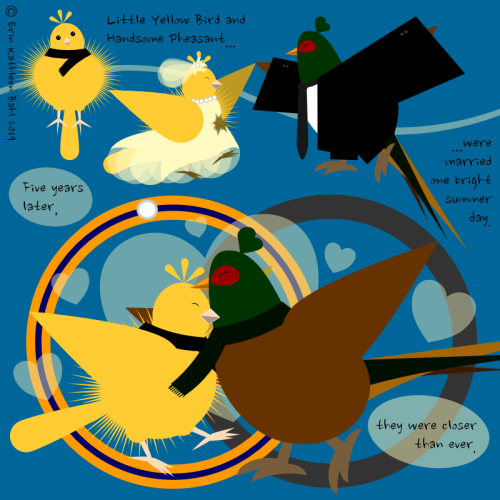 My beautiful wife’s new tattoo I did.

This is a story of self-discovery, sexuality and love. Jenna marries and has two beautiful children, hoping for a long, happy married life. She struggles to live up to her own expectations of being a mother and a wife, and then someone comes along that makes her question her sexuality, and her whole world is turned upside down.

There were so many parts of this story that made me feel like my heart had been ripped out of my chest. The writing style was amazing, and hearing about the death of her first child, and the premature birth of her second baby killed me. She expressed her emotions so perfectly in the writing from beginning the end about the marriage, her affair, and her love for her two children Andrew and Brook.

Her love for her partner Jesse was so obvious and translates wonderfully on the page. I was routing for them the entire time and hoped for a happy ending. Luckily they got one, and Jenna wrote her story for the world to read.

Who wrote a big sad, angsty af fic?!…I DID! Cause I’m in a big sad mood

Summary: It was supposed to be a joyous time for the royal couple, but their world came crashing down around them in an instant.

During the courting period, you can control the level of attachment by simply having *boundaries*. This means not flirting with each other (excessive romanticised chit chat, sexual chit chat, pouring out ones heart, seeking attention, kissing, sex) before the Nikkah (marital contract).

This is how you control transgressing bounds and developing unhealthy attachments to a potential “rishta”(marriage proposal) that comes your way. This will ultimately protect you from a string of heartbreak, disappointment and being taken advantage of.

“This is a marriage of equals”

I know,
I know and you know, we knew,
we did not know, we
were there, after all, and not there
and at times when
only the void stood between us we got
all the way to each other

Anne and Mattew have almost 30 years of marriage. (we are currently in 1975 in game)

I can sit in a room that’s 80 degrees with the windows open and be comfortable. But if I’m in an 80 degree room and the windows are closed, I feel suffocated and scramble to open the windows.

I can be in the religion I’m in and be comfortable. But the second another member tells me we’re in this forever I am looking for all the verses in our religious text that talks about free will to prove them wrong and reassure myself.

If I get pregnant, I might chose to carry out the pregnancy and be at peace with it. But the moment someone tells me that it is my obligation to become pregnant and sacrifice myself in all things for the child, I’m panicking and thinking of all the things that could go wrong and feel trapped by my own body.

I can have a political leader that I respect and be satisfied by their leadership. But the moment they announce that they will be the leader until they decide to resign and no one can make them step down, I’m looking for all the ways to work as a collective to give our people the option to elect change.

I might marry one day and be happy with my partner. But if someone were to tell me that I had to marry that same person and had no say in it, I would feel the loss of my individuality and freedom keenly and jarringly.

I could decide to become a medical professional or join the military or work in retail. But if I am placed there and told I cannot quit until the higher ranks decide I’ve done enough, I will know that I am no better than cattle to them and resent my work, no matter if I would have chosen it otherwise.

If I apply for a stipend to aid with a disability and it’s not everything that I wanted, that’s okay because I got there of my own merit. If I am forced into a program that is exactly the same but still isn’t enough and there isn’t anything I’m allowed to do to change it or risk having no help at all, I know I am being treated like a problem and not a person.

Just because we are comfortable with the choices we’ve made does not mean we would be comfortable in that same position by force. We need options. We need move to room. We will sit happily in the sun, but build a cage around us and we will feel the burn the morning star with all the heat that will swiftly and effectively exhaust us. This isn’t about anything in specific. Or maybe it’s about everything. I just really needed to express how important it is for people who are impacted by decision to be the ones who are allowed to make those decisions.

May I introduce you to…

Edmond was the last child of Jules de Polignac, and after his father’s death, Edmond’s mother and her children moved back to Paris, where Edmond continued studying music, while still in Bavaria he received education in Greek, Latin, modern languages, and training in dancing and horseback riding. English, French and German were often spoken in his house. He was gay.

Winnaretta was an American-born heir to the Singer sewing machine fortune. She used this to fund a wide range of causes, notably a musical salon at her home where her protégés included Debussy and Ravel, and numerous public health projects in Paris, where she lived most of her life. She openly enjoyed many relationships with women. Her first marriage was annulled five years after a wedding night that reportedly included the bride’s climbing atop an armoire and threatening to kill the groom if he came near her. METAL.

They married in 1893 (he was 59, she was 28), because Edmond needed money, and Winnaretta needed a title. The representations held by her at her renovated atelier? They were held while she was married with Edmond, as he was himself an amateur composer, and were held long after his death.

Okie, so their marriage wasn’t only materially-oriented. It was based on profound love, mutual respect, understanding, and artistic friendship, expressed especially through their love of music. The same year Singer exhibited her work at the Palace of Fine Arts at the World’s Columbian Exposition in Chicago, Illinois. Thus they had somewhat of a safety net in the eyes of society. Another reason for them to marry was that neither of them needed to hide their homosexual affairs from each other.

And they grew even more affectionate towards one another as time passed!! They held hands in public, and he was sending her love letters (“Chère, chère Winnaretta”… // “Dear, dear Winnaretta”).

What I love even more about their marriage? The terms used to describe it:  mariage blanc (unconsummated) and lavender marriage (between gay and lesbian, so as to appear straight). Lavender. Beautiful, but I don’t like its smell.

Edmond died from an illness in 1901. And Winnaretta continued her affairs (with lots of women).

Winaretta’s female relationships (she had numerous before, during and after her both marriages, but the following are all after Ed’s death): painter Romaine Brooks, artist’s model  Olga de Meyer, composer and conductor  Ethel Smyth, pianist Renata Borgatti, socialite and novelist Violet Trefusis, and gardening expert Alvilde Chaplin, with whom Winnaretta lived at the time of her death, in 1943.

So there it is, your piece of gay history.

(According to My Husband) 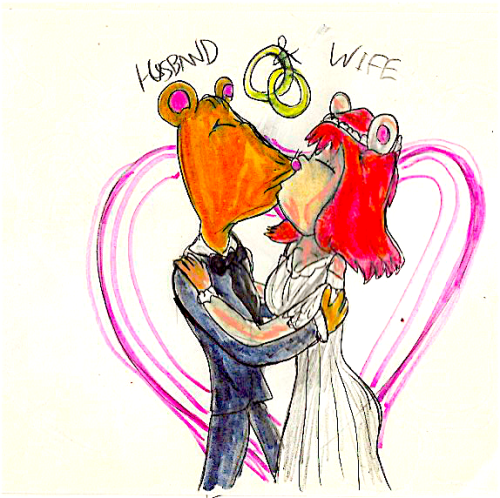 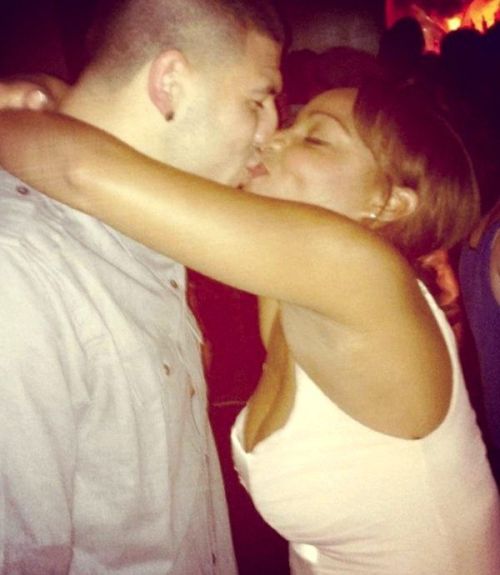 When TV show and movie actors’ characters get married, it counts as getting married in real life. They have to fill out paper work and get lawyers after everything is done filming to make the divorces official. That’s why the divorce rate in America is so high like Wiz Khalifa.