I feel like with burning and such, you die relatively quickly (a few minutes at most) but with being crucified it’s meant to last awhile.

#saints#martyr#anomalous-heretic
61 notes
perfectdiction-ary
Quote
<div> —  1 Peter 3: 13 & 14 (NIV) </div><span>Who is going to harm you if you are eager to do good? But even if you should suffer for what is right, you are blessed…</span>
#verseoftheday#quotes#reading#books#booklr#religion#christian#church#bible#knowledge#education#learning#wisdom#good#charity#samaritan#generosity#help#kindness#martyr#salvation
0 notes
foreverpraying
Text

February 23 is the feast day of St. Polycarp, Bishop and Martyr

Polycarp, bishop of Smyrna, disciple of Saint John the Apostle and friend of Saint Ignatius of Antioch, was a revered Christian leader during the first half of the second century.

Saint Ignatius, on his way to Rome to be martyred, visited Polycarp at Smyrna, and later at Troas wrote him a personal letter. The Asia Minor Churches recognized Polycarp’s leadership by choosing him as a representative to discuss with Pope Anicetus the date of the Easter celebration in Rome—a major controversy in the early Church.

Only one of the many letters written by Polycarp has been preserved, the one he wrote to the Church of Philippi in Macedonia.

At 86, Polycarp was led into the crowded Smyrna stadium to be burned alive. The flames did not harm him and he was finally killed by a dagger. The centurion ordered the saint’s body burned. The “Acts” of Polycarp’s martyrdom are the earliest preserved, fully reliable account of a Christian martyr’s death. He died in 155.

José Benlliure y Gil: The vision of the Colosseum. The Last Martyr.

He said before his death: “Father… I bless Thee, for having made me worthy of the day and the hour…”

The content of the book of Revelation is predominantly these two things: the persecution of the church by the dragon—and he is conquered; the persecution of the church by the beast and false prophet—and they shall be conquered. The dragon was the heathen power of the Roman Empire, and it was a glorious thing to suffer under that power. They that did so are described in the revelation to John, ‘These are the ones coming out of the great tribulation. They have washed their robes and made them white in the blood of the Lamb. Therefore they are before the throne of God, and serve him day and night in his temple; and he who sits on the throne will shelter them with his presence’ (Rev. 7:14, 15). But of those who suffered under the beast and the false prophet, it is also said, ‘They have conquered him by the blood of the Lamb and by the word of their testimony’ (Rev. 12:11).

We consider those who won the liberty of the gospel and of the Christian religion by suffering against pagan powers, and who destroyed idolatry by shedding their blood, ‘famishing all the gods of the earth’ (Zeph. 2:11), as great and glorious martyrs. There have never been men more glorious than they. They make up the company of those who, with palms in their hands and a new song in their mouths, give glory to God (Rev. 7:9-12). But it is not any the less glorious to suffer under the beast and the false prophet (the second persecuting power), i.e. the papal, antichristian power, than to suffer under the pagan. The church has had to fight against this for many ages, and must continue to do so until the time comes when it shall obtain a complete and perfect victory over it. This is a glorious thing, and you must see it as such. If a time of martyrdoms at Smithfield should arrive again—if God should call us to that fiery trial, or to any other, whatever it might be—remember that to suffer against Antichrist is as great and glorious as to suffer against Paganism.

us to Christ, all covered red 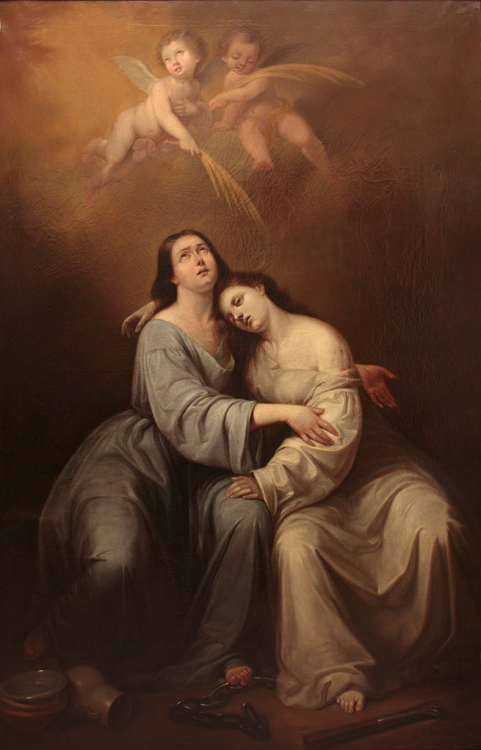 #antonio maría esquivel#saint#justa#rufina#martyr#19th century#romanticism
24 notes
perfectdiction-ary
Quote
<div> —  1 Peter 2: 13-17 (NIV) </div><span>Submit yourselves for the Lord’s sake to every authority instituted among men: whether to the kind, as the supreme authority, or to governors, who are sent by him to punish those who do wrong and commend those who do right. For it is God’s will that by doing good you should silence the ignorant talk of foolish men. Live as free men, but do not use your freedom as a cover-up for evil; live as servants of God. Show proper respect to everyone: Love the brotherhood of believers, fear God, honor the king.</span>
#verseoftheday#politics#religion#reading#books#booklr#quotes#knowledge#education#wisdom#learning#christian#bible#faith#government#hard pill to swallow#example#martyr#order#proper#peaceful protest
1 notes
hauntedbystorytelling
Text 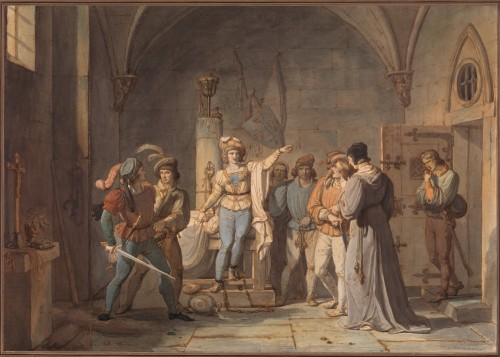 He is supposed to have been the second bishop of Aquileia, succeeding Hermagoras. During the persecution of Numerian he was tortured to death under the prefect Beronius. Before his death Hilarius’s prayers brought about the collapse of the pagan temples in Aquileia and the images of the gods they contained, to which he had refused to sacrifice.

His martyrdom was shared by his deacon Tatianus, otherwise Tatian, with whom Hilarius’s name is often linked, as in the dedication of Gorizia Cathedral, and also by their companions Felix, Largus and Dionysius.

The feast day of Hilarius and companions is 16 March, the date of their martyrdom. 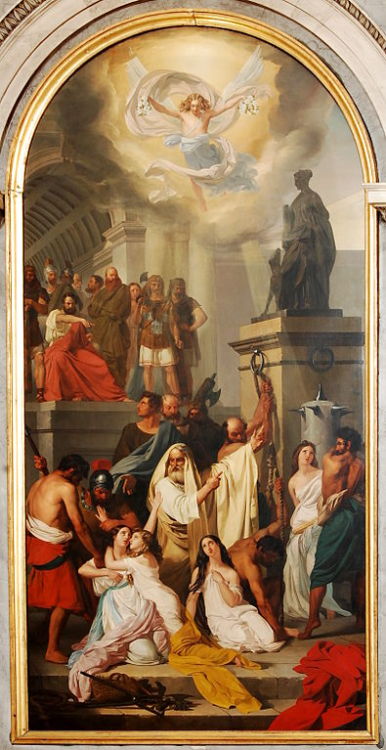 This game is fun. 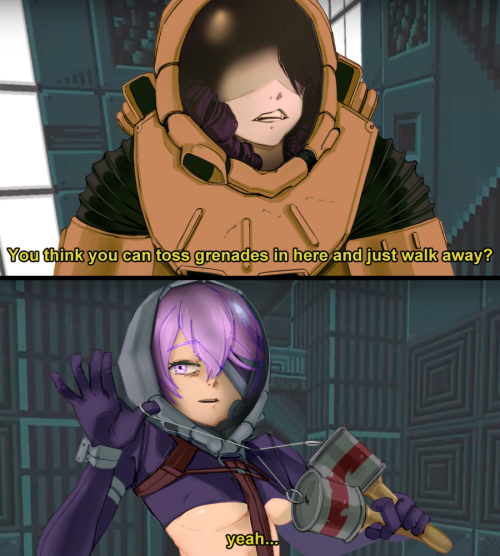 HEAD OF A MARTYR (detail) by Takato Yamamoto is printed in his book “Divertimento for a Martyr”. Signed copies of this hardcover book are available at akatako. 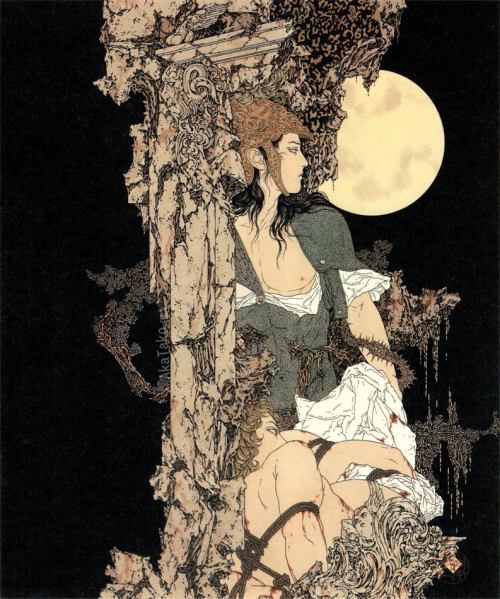 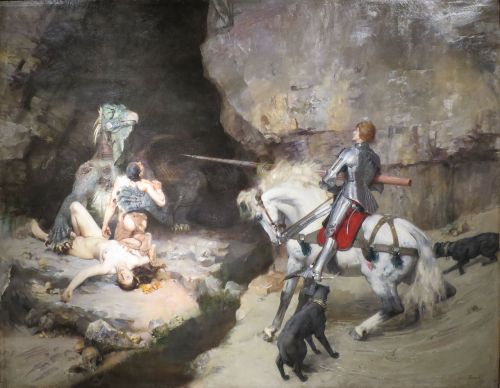 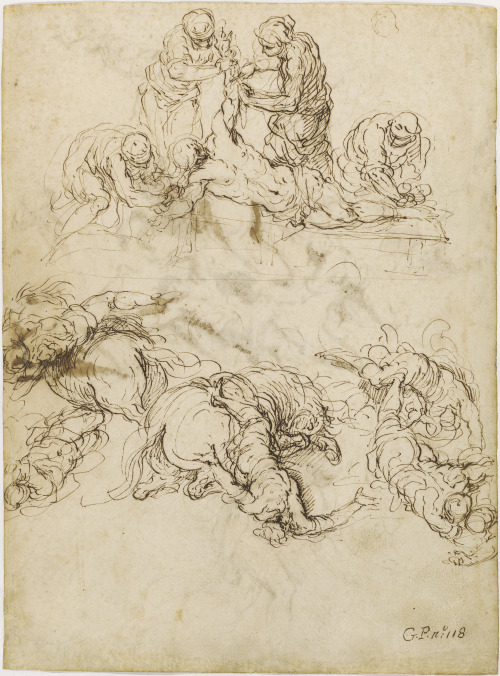 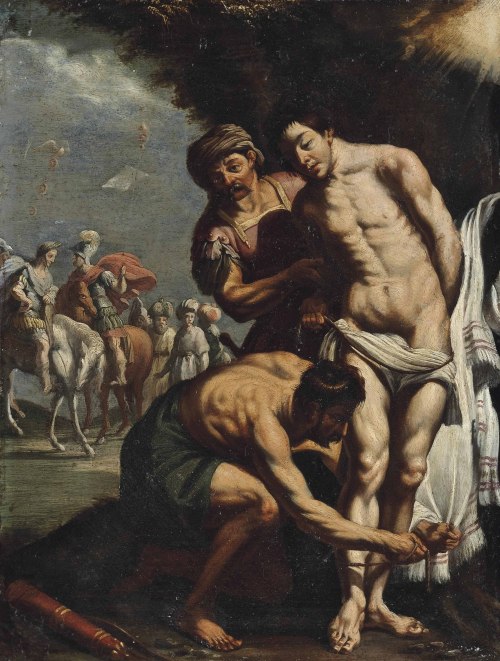 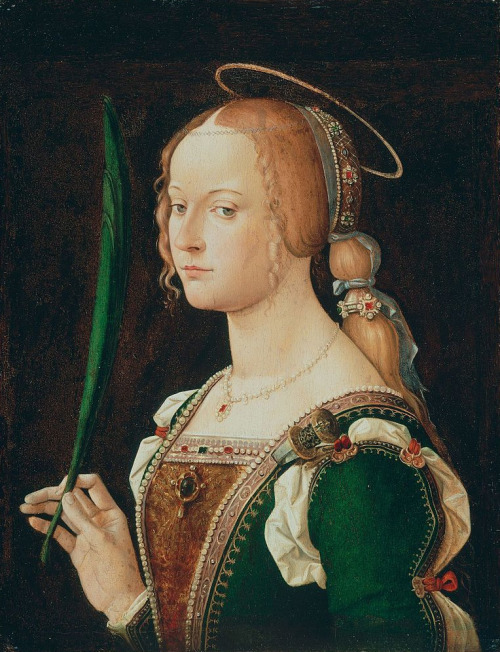 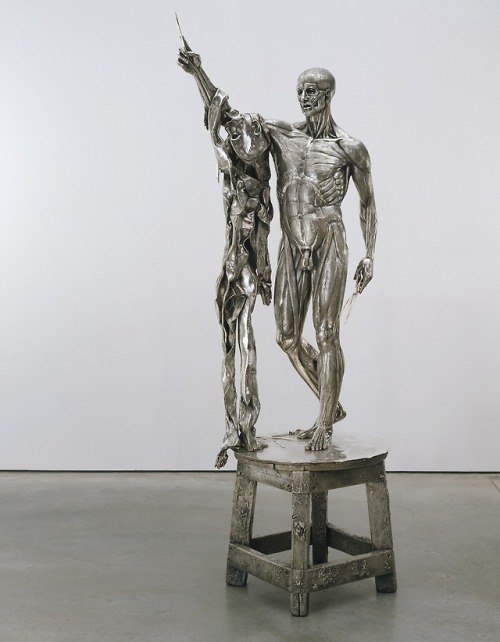 On February 17 1688 James Renwick, the last Covenanter martyr, was executed.

Born in Dumfriesshire, Renwick was educated at the University of Edinburgh, graduating with a Master of Arts in 1681. Whilst at Edinburgh he witnessed the execution of Donald Cargill, a radical Covenanter preacher who had repeatedly preached against the restored Stuart monarchy and the imposition of the episcopal system of Church government.

The event convinced Renwick to join Cargill’s fellow adherents, most notably Richard Cameron, and he was sent to Holland to continue his theological studies. In 1683 he finished his studies and was ordained. He returned to Scotland via Ireland in the same year and began his ministry, organising various secret meetings in fields and empty churches.

Renwick gained popularity amongst Covenanters through his skill at preaching but in 1685 he refused to join the insurrection of Archibald Campbell, 9th Earl of Argyll, and lost many friends and supporters. In 1687 James II granted two indulgences giving Presbyterians full liberty to assemble for their worship in meeting-houses or private residences, on condition of registration and taking an oath of allegiance. All but Renwick and his followers agreed to the stipulations and he and his followers were hunted down by the authorities.

He was captured on 1st February 1688, whilst visiting Edinburgh. Although he was given plenty of opportunity to recant his opposition to the Stuarts throughout his trial and before his execution, he refused and was duly hanged.

During his life Renwick never published any of his writings or sermons but soon after his death they were collected, transcribed and published, with a faithful follower, the Reverend Alexander Shields composing first a eulogy of his death and later a fuller biography of the man.

The first pic is a depiction of Renwick being taken down the West Bow to the Grassmarket for his execution, the houses you see at the end on the right, are still there and make up the bottom of what is now Vctoria Street. The second pic is of his execution, third is James Renwick statue, Old Town Cemetery Stirling. 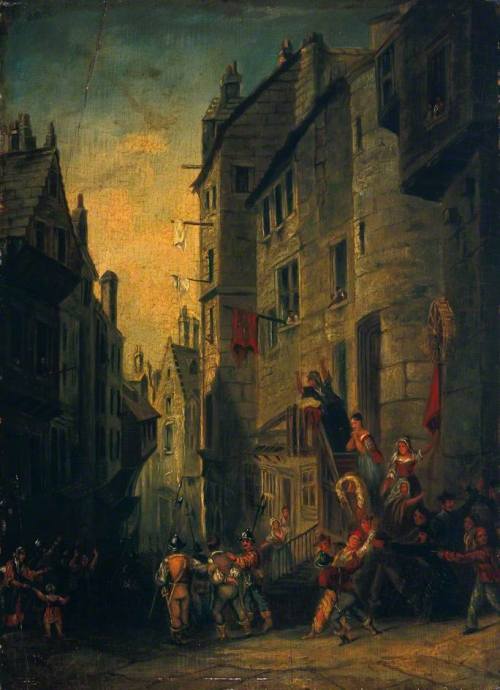 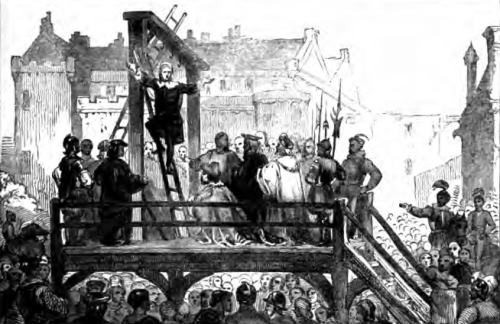 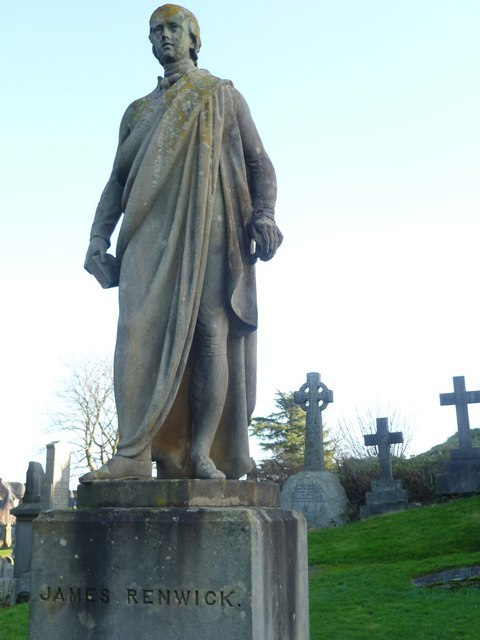