Hope Everyone had a wonderful Thanksgiving! I did, first one with the new fam. So it was wonderful! Early stream today Marvel Avengers ! Time to grind on Iron man after completing Frost Thor!!(video will be up on youtube about that soonish)

Does anytime know the fanfic where Peter calls fury after may and Ben died. He’s angsty and works along the avengers but they think he’s disobedient and reckless. Steve is always scolding him and Peter is just so done. He’s also best friends with Matt and Wade. Peter was a soldier when he was young and met Wade around that time.

So I’ve been avoiding having this conversation, but it needs to be said. While I do enjoy the Avengers game, I feel like the lack in new content is what’s holding the game back. Now I understand the delays due to COVID-19 and the Wildfires, which affected the team, however there needs to be some new content and a reason to keep playing. I’m really anxious for the Kate Bishop & Clint Barton content, and I feel like it might reinvigorate more life into the game. There needs to be new bosses, new enemy types, and new locales for this to work. The game has so much potential, they just need to iron out the kinks and move past the setbacks.

Tony Stark, over intercom: Attention all personnel; come one come all to a wake for the late great God Loki. We’ll be morning all afternoon and evening. The deceased will deliver the eulogy and the guests will have twenty minuets for rebuttal. Remains to be seen in Stark Tower.

You’re loud about having access to 80 years of the Marvel catalogue and that’s the game you create?

You’re not giving what you thought you’re giving

For this week My 2 Cents Nintendo/Gaming video for the week of November 8 to 14 I give my thoughts on Serious Sam Collection coming to the Switch, Controversy hit the game Genshin Impact, Altus might bring more of there games to other platforms following the success of Persona 4 on PC, Marvel Avenger may have not been the success Square Enix wanted & Scalper are at it again with PS5 & Xbox Series X/S

(no i didn’t forget mcu) 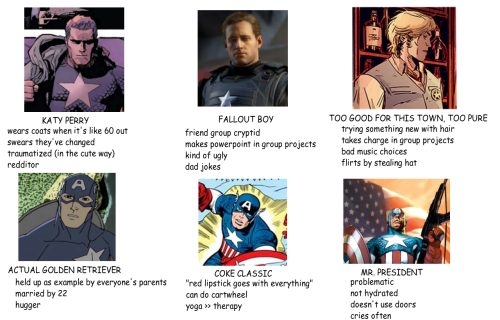 You know, if they could make skinny Steve Rogers out of the tank that is Chris Evans with CGI and all that, then they can probably do the same to give all male actors those sculpted abs that they want for the thirst traps instead of, you know, making them starve and dehydrate themselves to near death for a scene that will last for less than a minute

#they could also just show what an actual HEALTHY muscular male body looks like, #instead of still insisting that there's no other way for man to look and be considered 'sexy' or even remotely good looking, #marvel avengers, #chris evans, #steve rogers, #avengers, #kpop, #bts, #stray kids, #got7
10 notes · See All
miniherodesktalesText

This was just for fun, don’t hate me. I was thinking about how different the MCU would look if it had been created in the past….I prefer the real version ;D

Bill Murray as Tony/Iron Man because Murray was good at improv.

I get a sort of Hawkeye vibe from Mel Gibson

Thor and Loki :P  You can tell they’re twins or adopted or something.

I couldn’t really think of anyone for Cap, so I went with Sylvester Stallone…

I think that young Will Smith would make an interesting Peter/Spiderman. There were a few dramatic/sad moments in Fresh Prince, showing that Smith can act. I think it would be fun.

Square Enix has posted its earnings for the first half of the fiscal year, and a financial hit to its Digital Entertainment: HD Games division has pointed a clear finger at Crystal Dynamics’ Marvel’s Avengers for helping to create an operating loss of more than $48 million in the second quarter. This has been compounded by the continuing success of Square Enix’s MMO division, which has posted profits in both quarters thanks in large part to games like Final Fantasy XIV…

[Read more at Den of Geek]

Summary: You’re no longer affiliated with the team and come and go as you please. But it seems that your actions are starting to bring up things thought to be in the past

“The compound is for team members.”

Tony said those words to you before you could even try to settle in again. And you actually agreed with him. You wouldn’t want to live under the same roof as him in any case because you feel as if one day in the future, he’ll say something that will make you snap and…bye bye Tony Stark.

So, you got yourself a place in the city. You like to think of it as a safe house, especially for Bucky when he comes around to visit. He’s the only that’s allowed to enter, the only one with a key that he keeps on him at all times.

Slowly, more and more of Bucky’s things from the compound started to find their place in your own little house. Not that you minded. It actually makes you smile when you see something of his laying around when he’s on a mission. It’s almost as if it’s a reminder to you that you didn’t lose everything when you left the team. You still have that one person that has cared about you the entire time with you.

You still have the one person that understands you, where you come from, and why you do what you do.

“You told me everything was fine.” Bucky’s voice breaks your concentration, making your head snap up to look at him in the mirror in front of you. His eyes stare at the wound on your shoulder you’re slowly healing with a green glow around your hand - your connection with the time stone. You’re slowly reversing the injury.

Summary: Ife didn’t mean to have her employers be the subject of a hostile takeover by Stark Industries. She just held up the city of Novi Grad long enough for the Avengers to defeat Ultron. So naturally, Tony finds and blackmails her into joining the team. No good deed goes unpunished, huh?

A/N: This is my first long form (12+ chapters) story. I’m including characters and/or aspects from Disney’s Atlantis: the Lost Empire, Lilo & Stitch, Big Hero 6, Gargoyles, Inuyasha, and Toriko. Furthermore, I will be including elements of Netflix MCU and Agent Carter as well.

tony: listen, kid, just because i’m married to steve doesn’t mean i know how i did it