For @rise-up-ting-ting-like-glitter: thanks for the help brainstorming

Tony looked up with a mix of amusement and dread. He’d been on the prison transport for four days, that was eight meals, and he kept expecting something to happen during the common feeding time.

Most of the rest of the days he was locked in a single occupancy cell and generally ignored.

The guy who was starting something was new; he’d been brought aboard with another half dozen mismatched prisoners yesterday. He looked human, but Tony knew that didn’t necessarily mean anything. In fact, he looked like a refugee from a Kevin Bacon movie from the 80s, all wild hair and red leather jacket. He had the same collar around his neck that Tony did, though, which meant he was a prisoner.

Tony hadn’t been able to keep his own clothes; he was in the standard issue, brilliant purple jumpsuit. The prison automated guns were supposed to be able to instantly target any and everyone in the outfit.

This guy was wearing the jacket over his outfit. Tony wondered if that would keep the guns from being able to target him. And who he’d bribed to be able to wear it. It clashed horribly with the jumpsuit, but he was probably warmer than Tony was.

And he was eyeing Tony’s dinner like it was worth eating.

Because there were so many different aliens on the transport, food was… well, a mix of the inedible and unappetizing varieties. Tony had discovered the hard way not to try to eat the “meats”. But bread and the vitamin puddings, while disgusting, were at least digestible. Starving to death was not the plan.

Sometimes, in the middle of the night, Tony wondered if he could remember what the plan was.

The transport was horribly cramped, there were fights in the feeding room daily, and at least twice that Tony was aware of, someone had been taken away in a body bag and spaced.

But he was trying to keep his head down, mind his own business, and survive.

The guy in the red coat was still standing there while Tony decided what to do. He could meekly hand over his dinner, which seemed a good way to make sure he never ate again.

Tony grabbed the roll and stuffed the whole thing into his mouth, chewing insolently. He’d need the calories.

“I think you got an attitude about sharing, pal,” Redcoat said, taking the pudding cube off the tray and sticking it, unopened, into his pocket.

“Yeah?” Tony asked around the mouthful of bread. Not the best plan, the bread was chewy and tough and took a while to swallow. He reached for the vitamin drink to wash it down. Yarrow juice and water, it was the best part of the offerings. He got the cap off and chugged about half of it before Redcoat grabbed the tin tray to steal the rest of Tony’s dinner.

Which, while that was the meat and vegetables part and nothing that Tony could digest, he’d been making trades with some of the other prisoners for additional bread or juice rations.

“That’s mine,” Tony said, standing up. Redcoat was almost half a foot taller than Tony was, and while scruffy, seemed muscular under his jumpsuit.

“You think so? Come take it,” Redcoat taunted.

So much for trade tonight.

Tony grabbed the tray, jumped up onto his bench and smashed it down onto Redcoat’s head. The man went down like a ton of bricks, meat, gravy, and some sort of blue vegetable material dripping off him.

“Anyone else?” Tony demanded.

Unfortunately, the answer to that seemed to be a resounding yes.

Title: Just Give Me A Reason

Notes: a collab for the @marvelrarepairbang​

Summary:  Falling in love with Steve was easy. Adding Bucky to the mix when he came back was just slightly more difficult. Clint should have known that nothing was that simple. When it all falls apart, he has to find a way to move forward. He can’t just quit being an Avenger. Then S.H.I.E.L.D. comes to him with a mission - HYDRA is up to something regarding the Winter Soldier. Clint will be damned if HYDRA takes Bucky from Steve again. And if working with the two super soldiers threatens to break Clint’s heart again? Well, he’ll learn how to deal. Getting back together? Not even on Clint’s radar.

Read the story on AO3

See the art on AO3

Title: crowned with lilies and with laurel they go

Summary: Leo Fitz raises someone from the dead, and gets on S.H.I.E.L.D.’s radar. From then on, nothing’s the same. Written for @marvelrarepairbang!

or start with chapter one

He had found his familiar at the early age of 7, named him Steve, and they were accepted and loved despite the strangeness of Bucky’s familiar.

Then the war came and it changed everything.”

After being used and abused by Hydra for decades, the Winter Soldier finds himself in the city of Atlantis thanks to king Namor. As if his life weren’t complicated enough before.

Written and drawn for @marvelrarepairbang​!

Summary:  Art student Steve Rogers has a problem. Two problems, in fact. Their names are Bucky Barnes and Jane Foster, his favorite models and a couple destined to be together forever. The only thing Steve loves more than drawing them is hanging out with them. Studying with them. Getting drinks with them. Dreaming about them every night. And therein lies the problem…

Summary: On the surface, creating an army of super soldiers seemed smart, and would have meant Hydra could have multiple assassin’s at their disposal. But with their resources dwindling the project is canceled, and the results disposed of. One subject, however, was smuggled out. Bucky’s MIA, and the kid will always have a target on his back. It’s not how Steve imagined having a kid but at least in the 21st he can google exactly how to not kill a child.

Our fic for the @marvelrarepairbang !

5 chapters/Posting between now and Sunday

#simmorse, #titanic au, #aosficnet2, #marvelrarepairbang, #even if this isn't your ship the art at the end of this chapter is amazing, #I planned to put up chapter four too, #but I'm sobbing from exhaustion, #and should probably go to bed, #I'm pretty sure this story is the definition of write for yourself
9 notes · See All
judy-the-dreamer
#marvelrarepairbang, #bucky x pepper, #chilipepper, #marvel fic, #bucky barnes fic, #marvel, #mcu, #fanfiction, #fanfic, #pepper potts
1 notes · See All
sunalsoloveText

5 chapters/Posting between now and Sunday

#agents of shield, #fanfic, #simmorse, #aosficnet2, #marvelrarepairbang, #the art is amazing, #this is been so much fun to write!
11 notes · See All
thewaythatwerustPhoto

Art for the amazing fic Kneeling in the Sand Written by the lovely and talented @hogwartstoalexandria for our @marvelrarepairbang collab. \o/

A decade has passed since Jim had to watch his best friend leave the neighborhood, had to let go of his hand even as he kept running behind Sarah Rogers’ car, full of hope and the promises they’d made to each other that this wasn’t the end. Today, Jim is a retired Air Force Colonel, wounded in his last flight but still active for the VA and its civil missions.    One of these missions is to make sure subs without a home are cared for, as hypocritical as that sounds in a society where they’re not allowed to buy a house for themselves.

Jim thought he was prepared for anything, had seen everything, could not be surprised by a routine call to one of New York’s shelters, and yet…

And yet Steve Rogers living in one of said shelters certainly threw him. 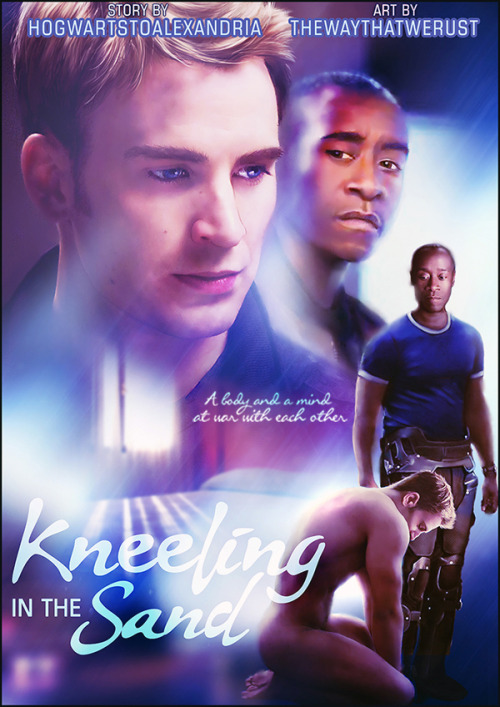 a story for the Marvel Rare Pair Bang (@marvelrarepairbang)

“I’m afraid time has not been so kind to me,” he said with a maudlin smile, sighing softly. Very much did it feel in recent years that his age was catching up to him.

Hulk frowned at that. “Hulk be kind to Thor,” he said at last, clapping a heavy hand on Thor’s shoulder.

“Thank you,” replied Thor, patting Hulk’s hand with his own, which looked so strangely small in comparison. “I consider it a great blessing to get to call you a friend.”

… in which Thor and Hulk (and sometimes Banner) attempt, albeit badly, to navigate their feelings for each other.

#marvelrarepairbang, #hulk, #bruce banner, #thor, #thorbruce, #thorhulk, #thunderscience, #frostmaster, #i don't know if korg and hiroim have a ship name but they make an appearance, #writings, #anyway this was such a joy to finally sit down and write so i hope you enjoy it!
18 notes · See All
askmeaboutmyoctopustheoryText

Queen Virginia Anne of Antelondia is exhausted and overwhelmed since the death of her husband and takes a covert trip to New York to see the Russian Ballet perform Swan Lake. A chance meeting the next day with the prima ballerina, Natasha Romanova, changes her life forever.

>> Summary: Steve will do anything to help his childhood best friend recover - anything, including chase down a fairy tale.

But what if that fairy tale is actually an enemy?