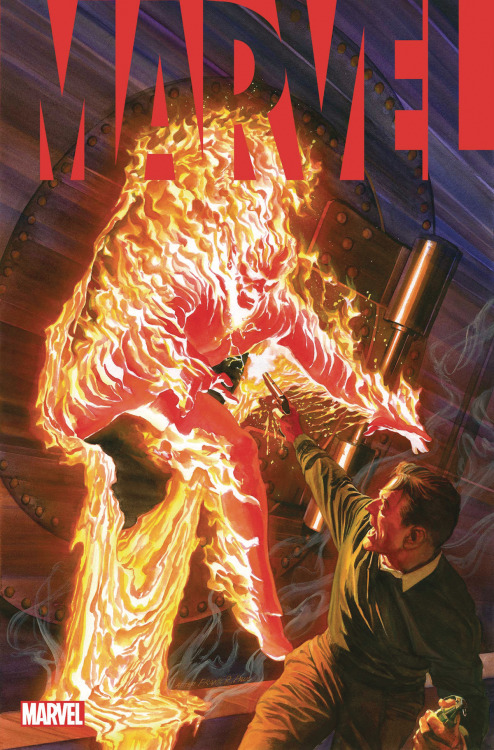 I still have a stack of pre-pandemic single issues to read. Catching up today under the sun. 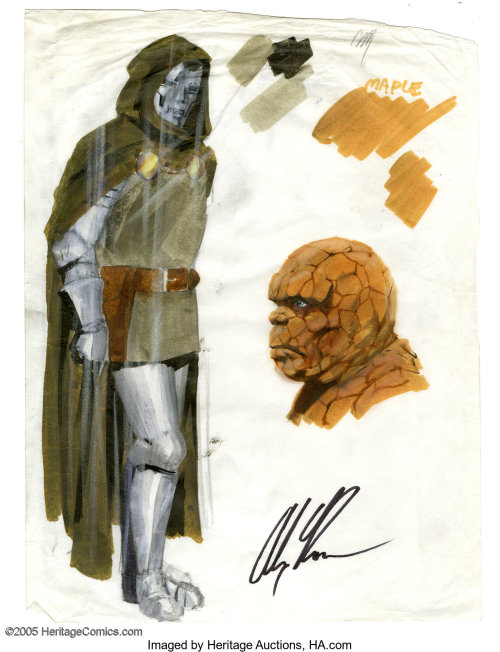 ALEX ROSS & JIM KRUEGER (W) • WELL-BEE (A)
Cover by ALEX ROSS
VIRGIN VARIANT COVER BY ALEX ROSS
VARIANT COVER by WELL-BEE
HIDDEN GEM VARIANT COVER BY STEVE DITKO
VARIANT COVER BY TBA
PARTY VARIANT COVER BY TBA
David has a problem.  He lives in a world of monsters that would love to devour him.  He’s the last boy on Earth.  The last human being on Earth.  And these creatures that see him only as prey, they’re his former neighbors.  He has one hope:  to get to New York.  To get to where Captain America and the rest of the heroes are.  Alex Ross and Jim Krueger combine their abilities with artist Well-Bee to tell a very uncanny prequel to the legendary EARTH X trilogy.
40 PGS./Rated T …$4.99 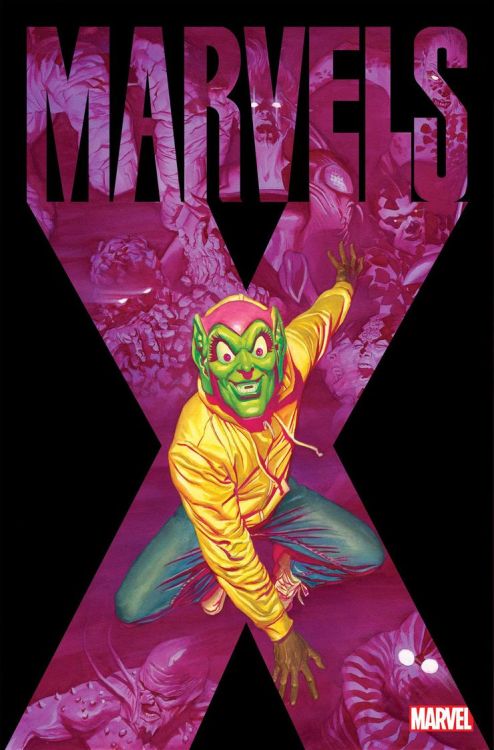 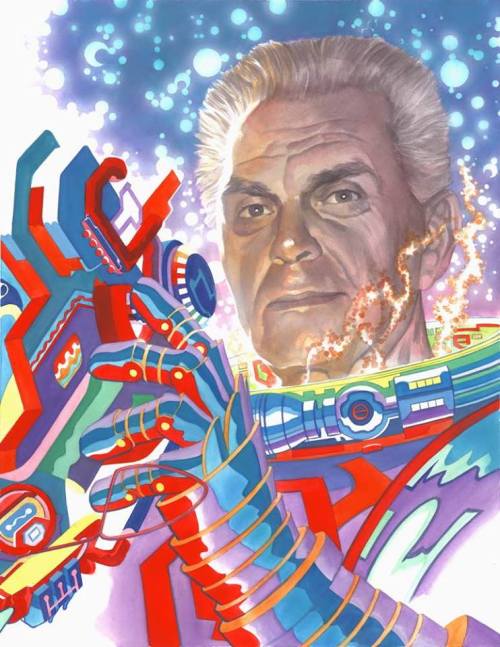 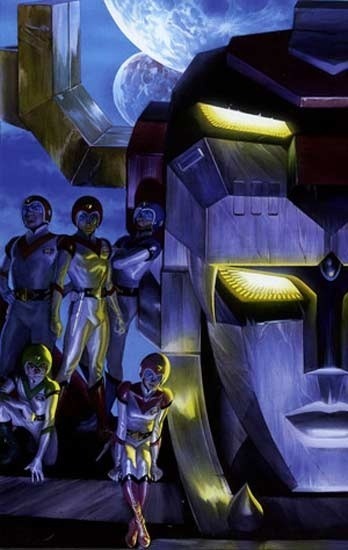 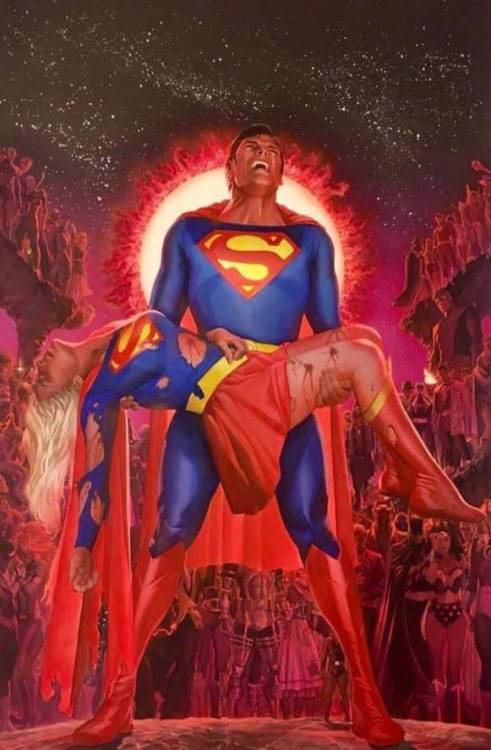 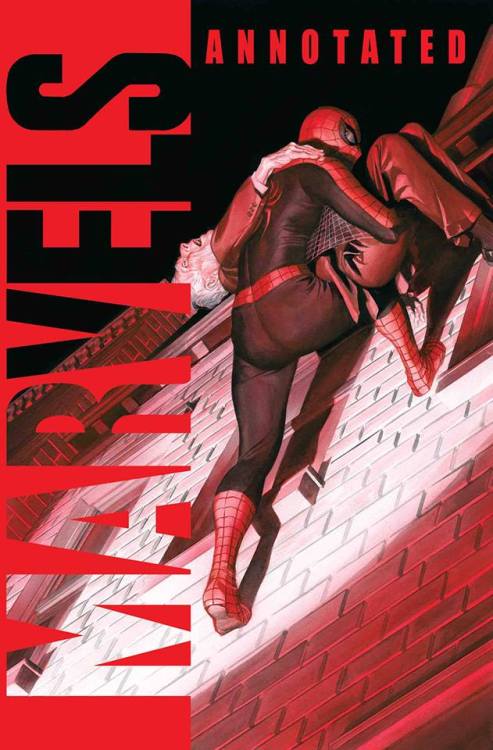 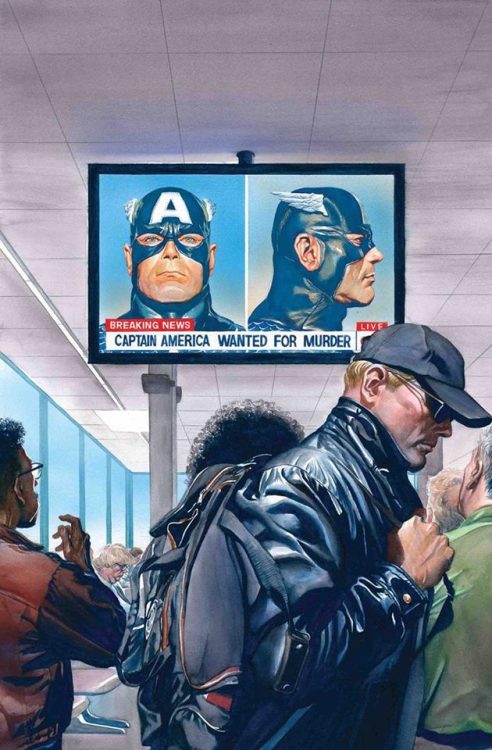 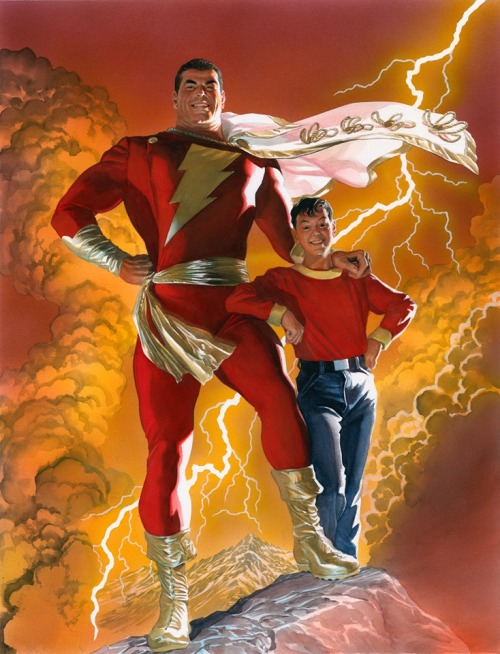 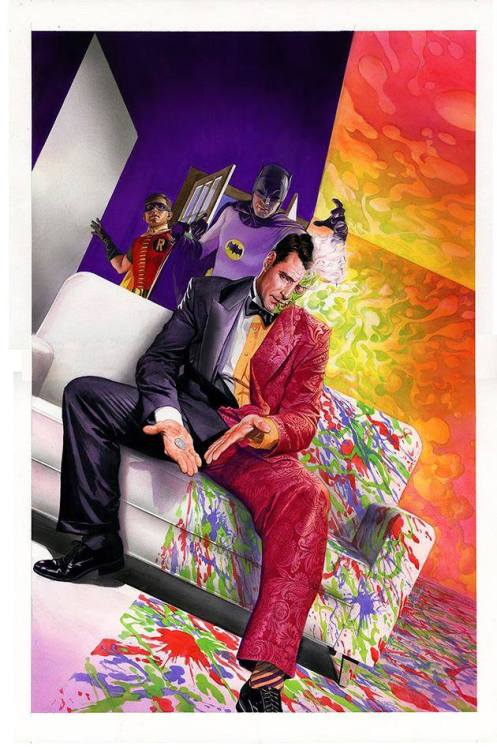 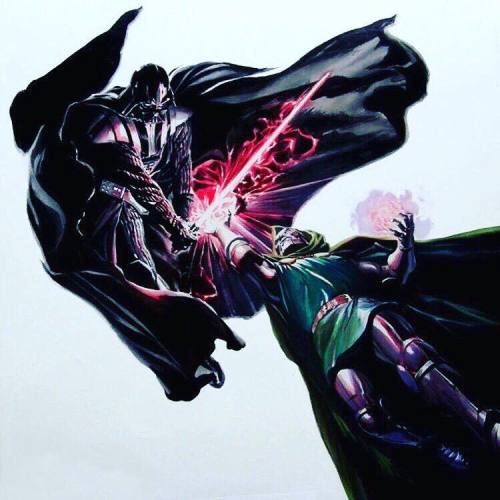 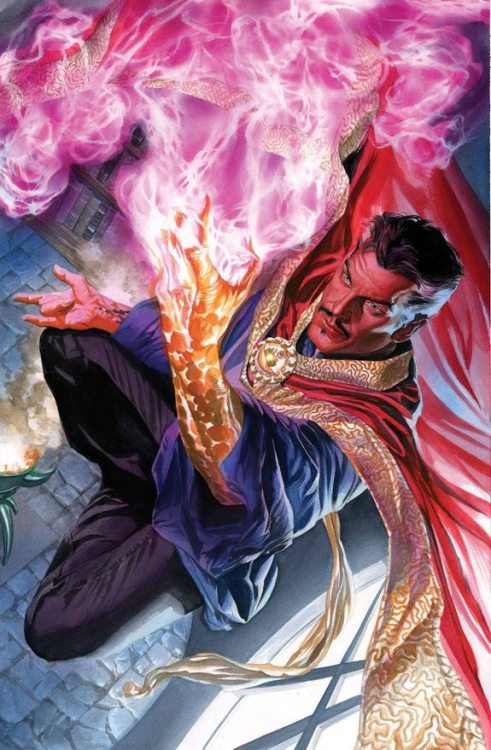 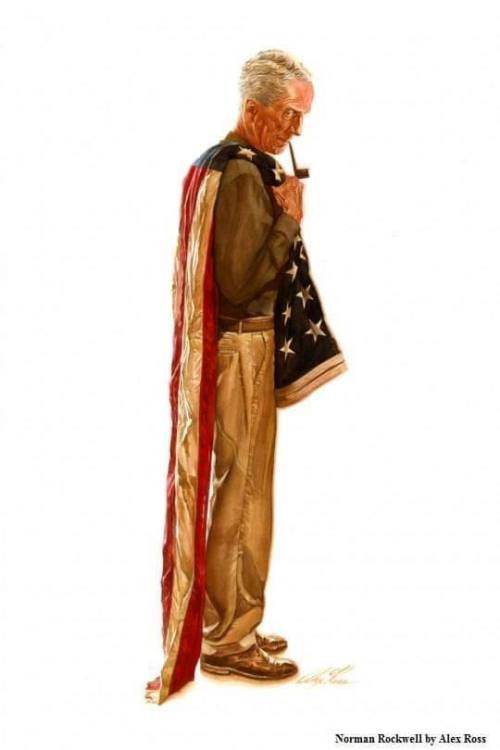 This is a very tricky story to talk about.

Written by KURT BUSIEK with ALEX ROSS & STEVE DARNALL
Penciled by ALEX ROSS
Cover by ALEX ROSS
The timeless classic that changed the way we look at Marvel super heroes celebrates its 25th birthday in style! Kurt Busiek and Alex Ross’ original tour through the early history of the Marvels — as captured through the lens of photojournalist Phil Sheldon — is collected in full! Then, Busiek and Ross reunite for an amazing new epilogue featuring the all-new, all-different X-Men in deadly battle against the Sentinels — with the now-retired Phil and his daughters caught in the middle! Plus: A behind-the-scenes look at the creation of the epilogue; scripts, sketches and scores of other bonus features and a stunning gallery of variant covers paying tribute to the 25th anniversary of MARVELS! Collecting MARVELS #0-4, MARVELS EPILOGUE, MARVELS 25TH TRIBUTE VARIANTS and material from MARVELS ANNOTATED #1-4.
504 PGS./Rated T …$50.00
ISBN: 978-1-302-91987-0
Trim size: oversized 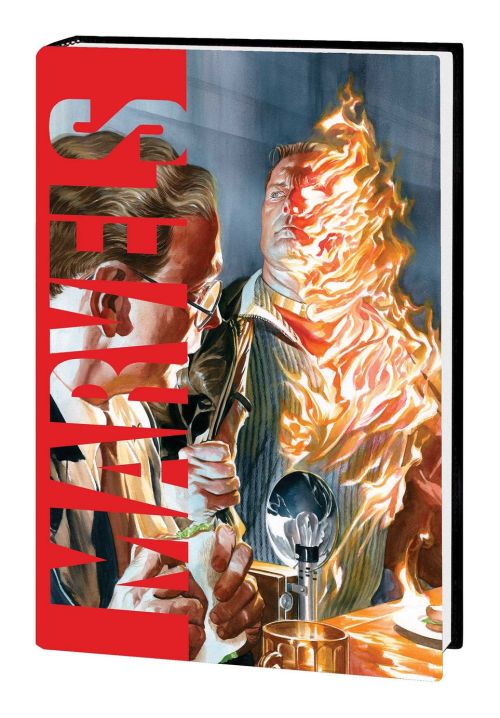 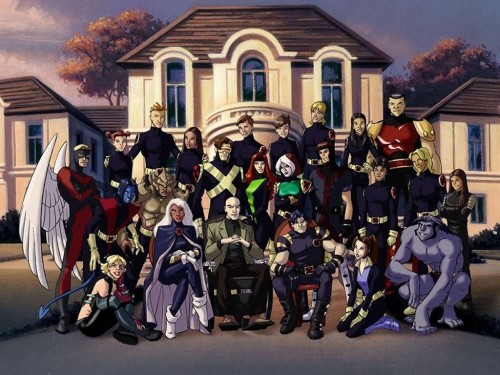 I keep trying to listen to today’s Marvels episode, but every time I turn it on, I hear “sure there were bad actors, but I also saw the New Yorkers you get any time there’s a crisis: the ones that will help you come hell or high water” and I start bawling and have to pause it.

#i tried listening to it while driving and almost had to pull over, #got hand sanitizer in my eyes trying to wipe the tears away, #so cathartic but gosh I'm bemotional atm, #marvels, #lauren shippen, #you are good
0 notes · See All
thirtytwoelvismoviesText

SALADIN AHMED (W) • Ryan Kelly (A)
Cover by ALEX ROSS
Variant cover by Ryan Kelly
HIDDEN GEM VARIANT COVER
BY MICHAEL TURNER
In the heart of the Civil War event, a human story unfolds. A S.H.I.E.L.D. agent, doing his best to do the job with honor – but is that possible anymore? A young, low-level super hero, trying to help his neighbors – but that’s not even legal any more. The two come together in a story that’ll test their commitment, ideals, hopes and dreams, by Hugo-Award-winning writer Saladin Ahmed (Miles Morales: Spider-Man, The Magnificent Ms. Marvel) and artist Ryan Kelley (Lucifer, Stranger Things). Featuring Captain America, Giant-Man, Maria Hill and more.
40 PGS./One–Shot/Rated T+ …$4.99 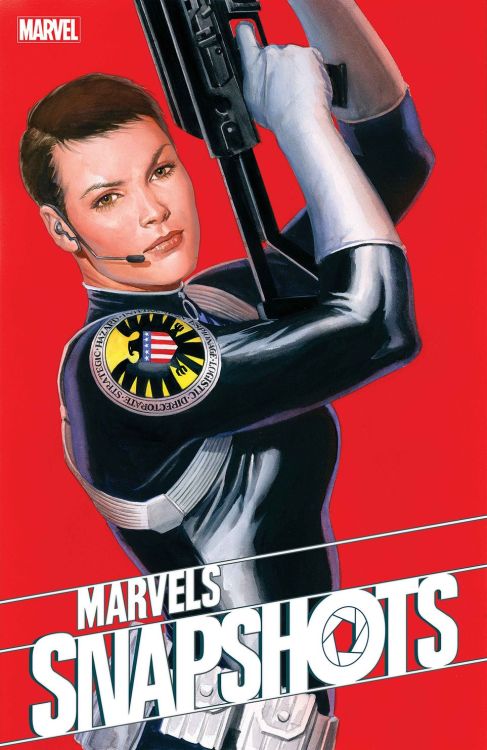 MARK WAID (W) • COLLEEN DORAN (A)
Cover by ALEX ROSS
Variant cover by Colleen Doran
HIDDEN GEM VARIANT COVER BY DAVE COCKRUM
A team of heroes fights a stirring battle for the safety of the planet. A young woman struggles with desperation and despair, trying to cope in the modern world. But that’s only the beginning. Superstar creators MARK WAID (Kingdom Come, FANTASTIC FOUR) and COLLEEN DORAN (SPIDER-MAN, A Distant Soil) tell a tale of inspiration within inspiration, as we see how the world’s marvels have inspired others – and how they’ve been inspired themselves. Featuring Captain Marvel, Ms. Marvel and a few surprises.
40 PGS./One–Shot/Rated T+ …$4.99 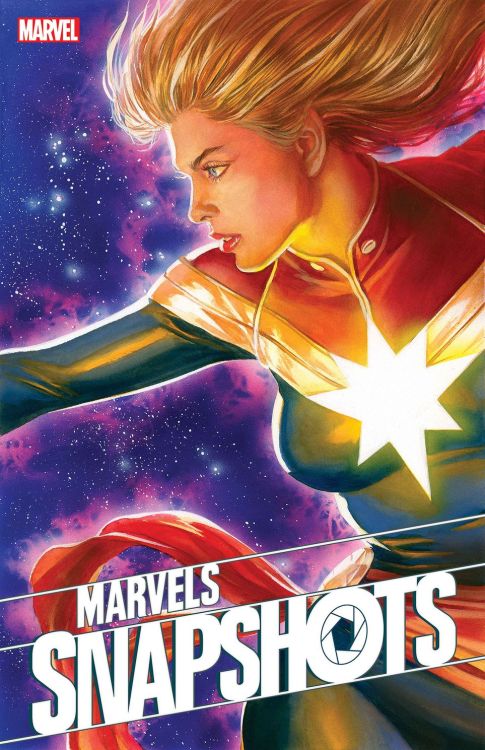 ALEX ROSS, STEVE DARNALL, DANIEL ACUÑA, DOUG RICE & MARK WAID (W)
ALEX ROSS, DANIEL ACUÑA, LUCIO PARRILLO & HILARY BARTA (A)
Cover by ALEX ROSS
VARIANT COVER BY Daniel ACUÑA
As Doctor Strange continues to contend with the machinations of Nightmare in the framing story by Alex Ross and Steve Darnall, a bevy of other creators lend their talents to stories from all across the Marvel Universe: Daniel Acuña spins a saga of the Deviants in the world of the future; Doug Rice and Hilary Barta explore the earliest adventures of Doctor Droom during the time of the Marvel monsters; and Mark Waid and Lucio Parillo pit the Hulk against a fighting mad Wolverine in a brutal painted saga!
40 PGS./Rated T …$4.99 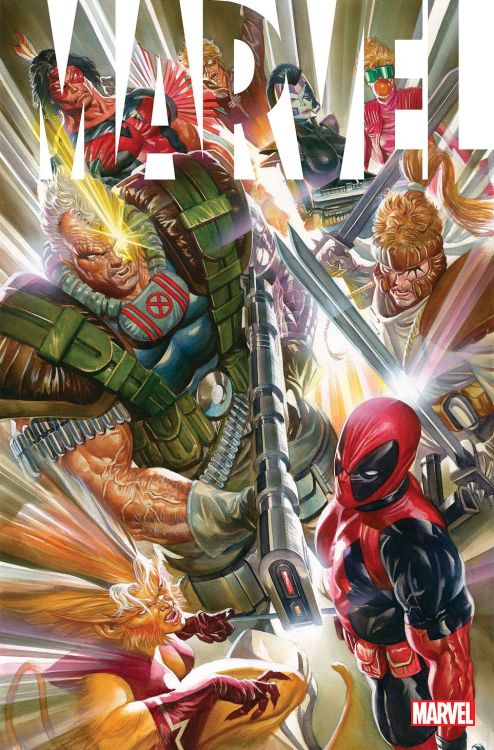 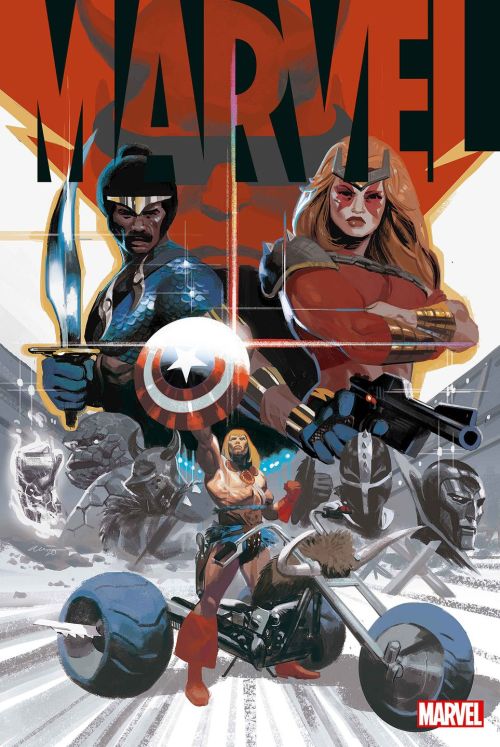 World War 2 is over and everyone is returning home.  But a day out at Palisades Park doesn’t work out for Namor and Betty Dean when an old enemy shows up to spoil the fun.

Told from Betty’s point of view in typical Marvels style, this book examines Namor from the outside.  And, typical of Namor, he’s kind of a jerk sometimes! The public still sort of fears him after his earlier attacks on New York, in spite of his contributions to the Allied cause during the war.  He’s been in Europe helping with restorations and comes back to become part of the All-Winners Squad. But before that, he spends a day with Betty.

Betty has been a companion and love interest for Namor for a while at this point, and like everyone after the war, is now looking towards the future.  She learns a lot about him this issue and it colors those plans.  She realizes they may not have the future she envisioned.  But she also sees how much the war has effected him - fueling his rage and revealing some of the scars his experiences left on him.  It’s actually kind of eye-opening because I’ve never really seen Namor with those foibles either.

The Shark makes a comeback in this issue from some Golden Age Bill Everett appearances.  While not the most amazing bad guy, it was fun to see a throwback character that was actually created by Everett.

It’s always a pleasure to see Jerry Ordway’s art!  Just reminds me of Superman comics from growing up! Such a nice, simply style that works so well for the 1940′s setting.  He also provides the throwback variant cover that just makes me smile!

Kudos also go to Gabriele Dell’Otto for a more modern take on Namor on another variant cover!

Interesting post-war story that examines aspects of these characters we haven’t seen before.  Very enjoyable! 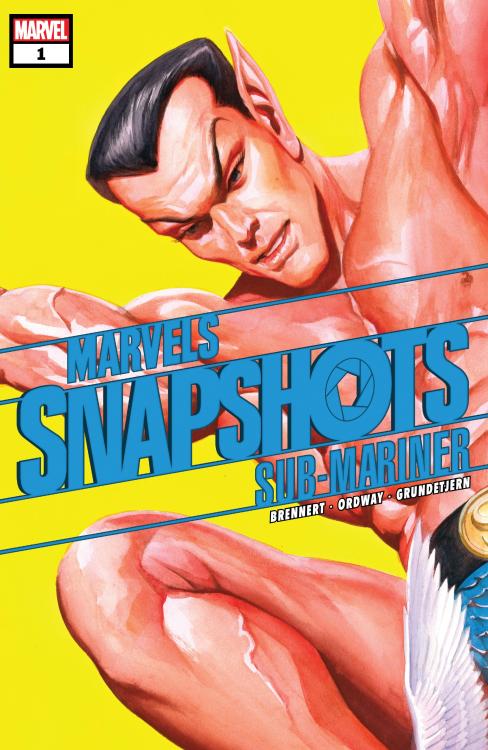 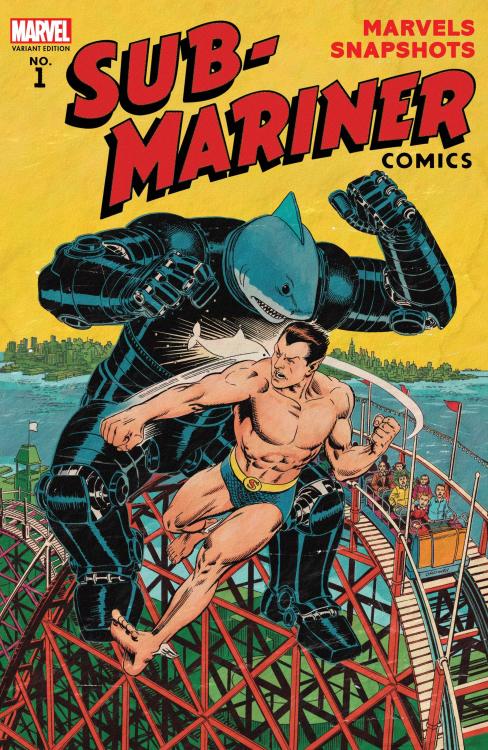 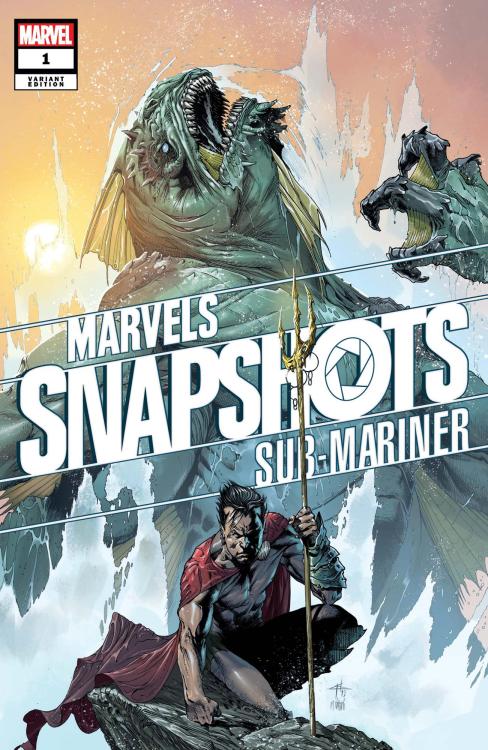 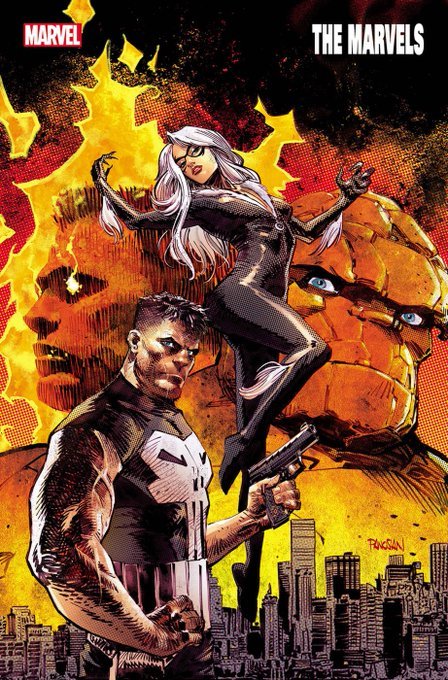 My syrup brings all the Marvel ladies to the table 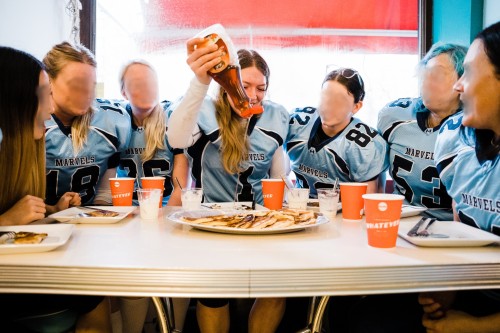 HOWARD CHAYKIN with KURT BUSIEK (W) • HOWARD CHAYKIN (A) • Cover by ALEX ROSS
VARIANT COVER BY Howard Chaykin
HIDDEN GEM VARIANT COVER BY LARRY LIEBER
Let’s say you’re a lowlife criminal in Manhattan, just trying to get by in a world that’s recently gotten full of spider-men, daredevils, power men and more, and you just want to make a decent illegal living. Plenty of henchman work available, if you don’t mind ending up in traction. And oh yeah, there’s a brewing super villain gang war building. What do you do? Keep your head low or go for the big win? Superstar storyteller Howard Chaykin (American Flagg, Wolverine) takes you through Marvel’s mean streets. Just watch out for Spider-Man, Cloak & Dagger and more.
40 PGS./One–Shot/Rated T+ …$4.99 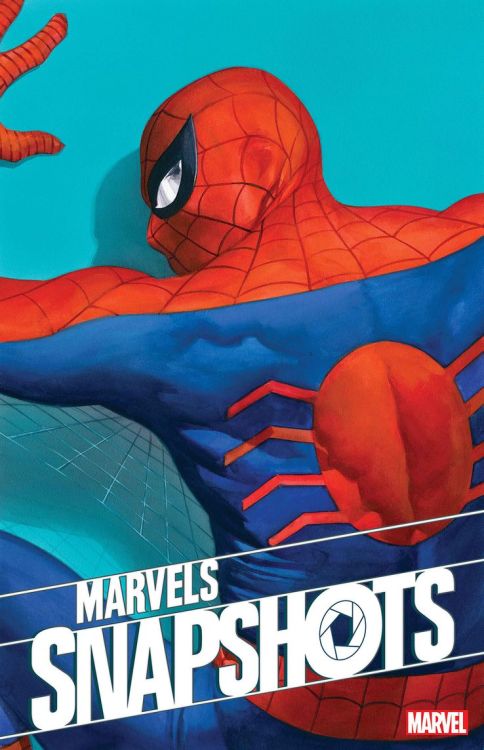 ALEX ROSS & JIM KRUEGER (W) • WELL–BEE (A) • Cover by ALEX ROSS
Variant Cover by WELL–BEE
Finding a cure for whatever it is that turned all of humanity into monsters proves almost impossible for even Reed Richards, Bruce Banner, Tony Stark and the greatest minds in the Marvel Universe.  The fact that no one wants to be cured leads to a revolt against the heroes themselves.  Alex Ross, Jim Krueger and Well-Bee continue their invincible prequel to the EARTH X trilogy.
40 PGS./Rated T+ …$4.99 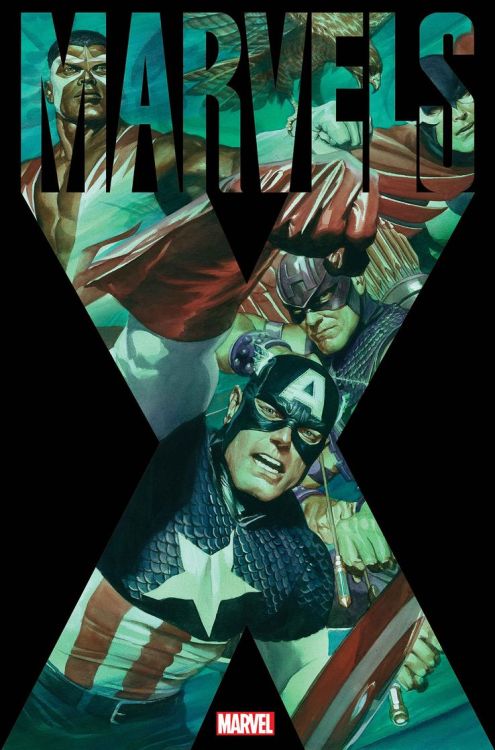 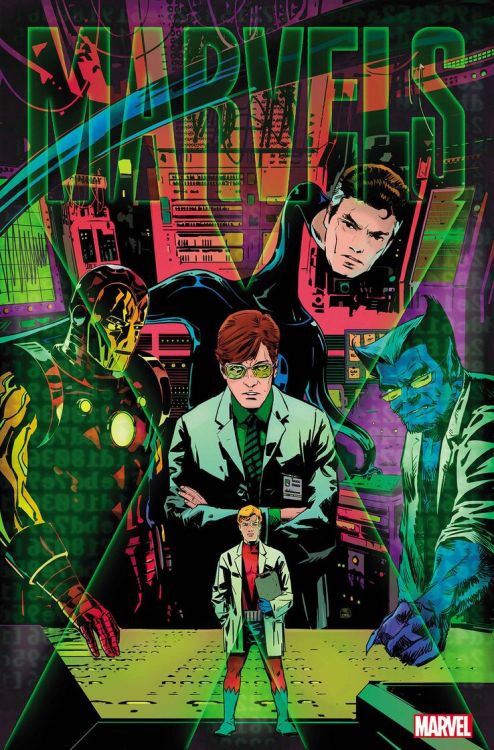