All the Gold in Neverland

There he found Stephen wandering cheerfully amongst the trees, mother-naked but for a fox skin tunic and his empty pistol holsters. “Devil take you, sir,” Jack said, stumbling up to him through the brush. “I thought you had been captured by natives.”

“My dear, how good to see you,” said Stephen warmly. “Not so; I have been captured by English schoolchildren.”

“Good god, Stephen,” Jack cried, looking about him in alarm.

“Handsomely, Jack, handsomely. You will frighten the birds.”

Jack Aubrey captures a pirate vessel off the coast of a queer little island where time is all ahoo and gravity is a matter of opinion. There Stephen Maturin finds himself kidnapped by a gang of filthy, noisy little boys who insist that he play at being their local country doctor. Meanwhile the prince of runaways himself has no intention of letting his favorite pirate playmate be sent to the gallows. 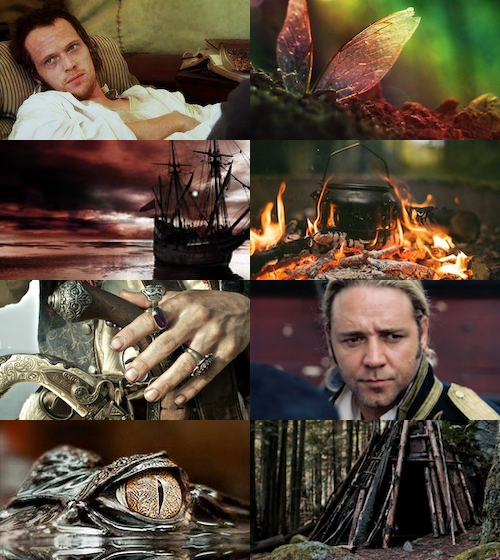 Another little snippet of my upcoming Aubreyad x Peter Pan AU! This time featuring Stephen and his reluctant association with the Lost Boys:

“My dears!” Stephen cried, nearing the end of his patience. “My dears! I am here; if any of you are ill, I can certainly attend …”

This was met with a chorus of, “No, no,” and Curly fervently shaking his head, declaring that he was no doctor at all if it did not take at least a week to fetch him, but as it was less than a day’s walk from one end of the island to the other, perhaps a mere hour or two would do. So Stephen was led by the hand back up the tree trunk and through the forest from whence he came, up to a rocky promontory that rose high out above the sea, and there he was told to sit and contemplate matters medical.

He had been there scarcely ten minutes, catching his breath and staring with dull confusion out at the Surprise where she bobbed in the bay, when Slightly came staggering up to him, hurling himself at his feet and proclaiming that Stephen was his savior; the turtle boy, Tootles, was terribly ill, and Stephen was the only physician for miles around, and would he please take this money- a handful of pebbles- for it was all dear Tootles’ mother had left in the world, and she a poor widow with the dropsy, and he must come at once with all his finest physicks or else poor Tootles must surely pass on to his reward.

So back they went, over the rivers and between the trees, with the bear-skinned Slightly dragging him along all the way, talking cheerfully of fevers, tremblings, sweats in the night, confusion of the bowels, humors, swellings, sores, boils. Had Stephen seen many dead men? Yes, Stephen had. Not half so many as Slightly had seen, for Slightly had killed four-and-twenty pirates at least, and all of them big, dreadful men with horrible scars. Was it true that Stephen might take the top of a man’s head off, set his brains to rights, and nail a bit of metal on to hold the thoughts back in? No, said Stephen, fearing that the boy might knock someone’s head in to see it done. Slightly looked oddly deflated by the news, but brightened as he realized that such things were beyond a poor country doctor’s means anyway, and he should not have asked it of him.

#master and commander, #stephen maturin, #aubreyad, #the aubreyad, #peter pan au, #my fic, #sneak peek, #I'M EXCITED, #this fic is a treat to write, #I hope it'll be just as much of a treat to read, #first kisses AND pining AND pixie dust!
19 notes · See All
clockheartedcrocodilePhoto 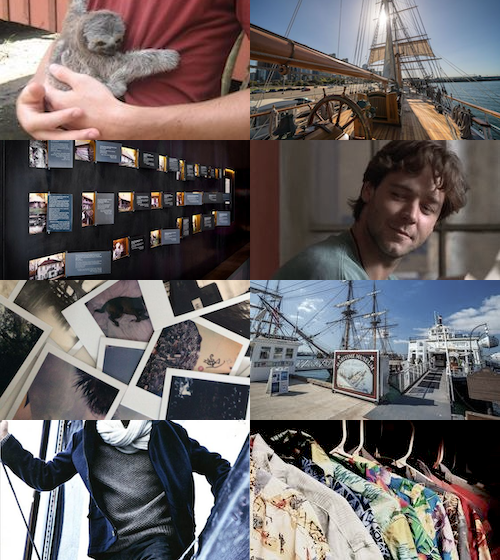 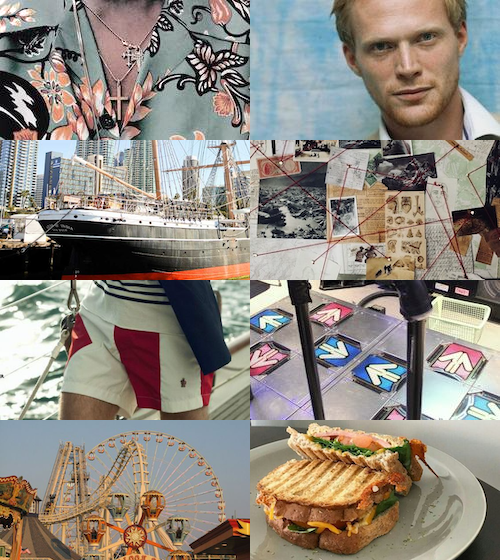 #master and commander, #stephen maturin, #jack aubrey, #aubreyad, #the aubreyad, #aubrey/maturin, #they sure do cherish each other to the ends of the earth huh
76 notes · See All
clockheartedcrocodileText

oh my heart breaks for him but I’m also so oddly touched that he walks long distances when he’s grieving or heartbroken, just like me

#master and commander, #stephen maturin, #I once had a night very like that, #walked eight miles out and eight miles back, #crying all the way, #it’s so deeply moving to me to see him do the same
38 notes · See All
clockheartedcrocodileText

Introducing a little sneak preview of the first thousand words or so of my next Aubreyad fic! Fic summary included at the end. Enjoy!

It was a cool, clear morning in late spring when Jack first took the ship as a prize. He had seen her sails on the horizon at eight bells the previous day and he was more than usually hard up; again his poor choices had left him in debt, and again the Surprise had been sent to sail empty seas beneath empty skies, with nary a prize to be had from here to Gibraltar.

She was a pirate vessel, and larger than his own- a 36-gun Spanish galleon to his 28-gun frigate- but the sight of her had ensnared Jack’s heart. He could think of nothing else. He let her lead him on a merry chase into a bank of mist, and all the while he watched the cut of her sails through his spyglass. She flew Rackham’s black, which was odd, as Rackham had been dead and hanged for more than eighty years.

#master and commander, #jack aubrey, #stephen maturin, #aubreyad, #the aubreyad, #aubrey/maturin, #my fic, #that's right it's a SNEAK PEAK, #this'll be a oneshot of prooobably 10k or so, #and I have other WIPs I need to finish first but, #I'm really excited about this project, #it's very different from the others I've written, #but still, #I'm sure SOMEONE will read it
23 notes · See All
ltwilliammowettText

#master and commander, #stephen maturin, #jack aubrey, #I'm not saying anything new here but, #the fact that he asks jack if he's alright, #makes me absolutely incoherant, #ugh this movie's a treasure
98 notes · See All
clockheartedcrocodileAnswer

the Aubreyad books really are absolute treasures, each and every one of them. I’ve heard that military buffs tend to get more into Hornblower but honestly there’s something in the Aubreyad to appeal to every reader

#master and commander, #he sounds like an aubreyad fan waiting to happen!
6 notes · See All
fatchanceQuote

Patrick O’Brian, in Master and Commander, 1969.

My first reading was in 1970. Re-reading it now from quarantine island is like finding a long lost friend. Whatever virtues the 2003 film possessed—based on an amalgamation of several of O’Brian’s  Aubrey and Maturin stories—they can’t compare to the pleasures of O’Brian’s engaging storytelling and nimble prose. His knowledge of the age of sail and sailing is colossal, prodigious, and the book is hard to put down. I recommend it.

Ever since I realised that the unfortunate brother and sister targeted by Lord Ruthven were surnamed ‘Aubrey’ I have been absolutely desperate to see Captain Jack Aubrey fight the OG Byronic Vampire.

(This may or may not be related to my suspicion that Mr Russel Crowe would have made a pretty fair Van Helsing if he hadn’t been cast as Doctor Jekyll/Mr Hyde in THE MUMMY).

really can’t emphasize enough that the main plot of HMS Surprise is that Jack rescues a fragile and sickly Stephen after days of brutal torture at the hands of the French and attempts to nurse him back to health only to spend the rest of the book in steadily rising panic as Stephen climbs the ratlines, does drugs, calls his ex, gets his dick out in public, starts a duel, buys a sloth, gets shot, proposes to his ex, blows his cover, drinks bird shit, kills a man, gets marooned, breaks the law, and almost adopts a nine year old

#master and commander, #jack aubrey, #stephen maturin, #aubreyad, #the aubreyad, #hms surprise, #sometimes I think about this absolute madlad and I get choked up
129 notes · See All
clockheartedcrocodileText

literally Stephen in Post Captain: yes my dear I will operate on this man as soon as the drugs kick in

Jack: oh you mean to sedate him

local man experiences laughter, unsure what this means for history of emotional repression

#master and commander, #stephen maturin, #aubreyad, #the aubreyad, #can you believe the context of this is like, #jack spending twenty minutes building up to a pun, #just to make stephen smile after diana stomped all over his heart, #I can’t handle it I CAN’T
124 notes · See All
Next Page