my side blog where I reblog my recent works is

“why do I keep getting weird asks? is this even an ask?”

Rid your chains bound by Hell

Dare to dare the devil

That devil is you”

Reunions don’t always go well. When it comes to certain angst-filled vigilante, one has to try twice as hard (even if half as liked).

Your days had been filled with patching things up with Steve (you had moved in with him within a day), getting to know Wanda and Vision, trying to redeem yourself in Natasha’s eyes and being teased by Sam Wilson in the friendliest way. The days were full of hesitance, awkward conversations, bashful looks, but also of laughter and sense of camaraderie.

You would train with the team too and interact with the soldiers and staff at the compound. You couldn’t but notice some recruits shooting you curious and hungry looks as you were a new piece of meat at the base – and mostly you couldn’t help but grin mentally at their suggestive smiles freezing on their lips as Captain America himself casted them a murderous look. Live was good.

The only thing truly bothering you (apart from no contact to your parents, naturally), was the lack of response to your attempts at reconnecting with Matt. Before you had disappeared, you would sometimes hang out with him, occasionally with his colleagues too, and you would talk about everything. Sometimes you would lend him a helping hand when dealing with the crime in Hell’s Kitchen despite Steve being a bit sour about it.

But now you had been trying to get in touch with Matt and he just wouldn’t answer.

Matt rescues Karen from the freezing waters of the River Hudson - 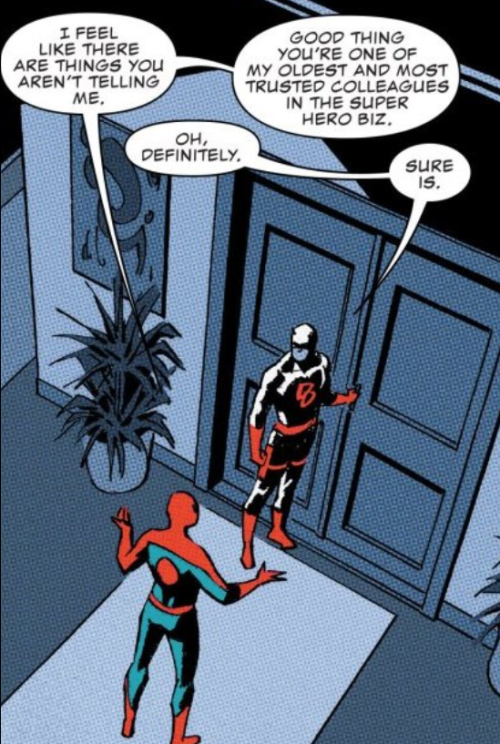 Just in case anyone was wondering what Stilt-Man was up to during Civil War.

tbh the crossover I actually do want is a Daredevil (2016) and Legends of Tomorrow (s5) purley to get blind Sara and Matt Murdock interactions, also Charlie flirting with Elektra 👀👀

#I WOULD LIKE TO SEE IT, #legends of tomorrow, #lot, #daredevil, #matt murdock, #sara lance, #elektra nachios, #charlie
2 notes · See All
kimburger1Text

i miss him sometimes

“I haven’t uh, actually met the guy yet…”

Summary: Frank has been turned into a dog. Jessica finds him.

Author’s Notes: sorry for the delay between updates. Enjoy <3