Lan Wangi is the local sad farmer boy and Wei Wuxian is an idol coming back to his hometown after making it big in the city:

#i have so much more but my brain is not working, #sAD WANGJI FARMER BOY!!!, #i finally had an idea for something smh, #lan wangji, #lan wangji headcanon, #wei wuxian, #wei wuxian headcanon, #the untamed au, #the untamed headcanon, #the untamed, #mdzs au, #mdzs headcanon, #mdzs, #mo dao zu shi, #the grandmaster of demonic cultivation au, #the grandmaster of demonic cultivation, #cql au, #cql
22 notes · See All
suitedsalamanderLink
stay for dinner, stay forever - Aminias - 陈情令 | The Untamed (TV) [Archive of Our Own]https://archiveofourown.org/works/24123655

Summary: Nowhere else would you find a zoo, where a fox in housed in the wolves’ enclosure - nowhere.

OR, lil red fox Wei Wuxian continuously sneaks into the wolf enclosure for sneaky midnight rendezvous with his wolfy companion.

This is all I have for now but fuck I’d kill someone for a hogwarts au fic.

Small hint for my next video that I just started working on! Also a glimpse into the dumb things I name my screen recordings 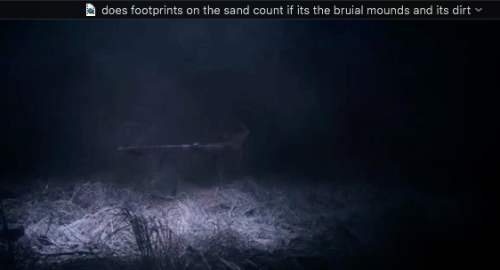 #the untamed, #the untamed au, #mdzs, #mdzs au, #mo dao zu shi, #the grandmaster of demonic cultivation, #can you guess the musical?, #i like to think im funny, #peep my spelling error
2 notes · See All
musicalmdzsText

Cursed idea that I’m starting to grow more and more fond of: Annie AU with A-Qing as Annie, Song Lan as Warbucks, Xiao Xingchen as Grace, and Xue Yang as Hannigan

The juniors as the other orphans (Jin Ling as Pepper, Lan Sizhui as July, Lan Jingyi as Tessie, and Ouyang Zizhen as Molly)

Wen Chao as Rooster and Wang Lingjiao as Lily  

Wangxian AU: Su She was successful in his mission of bringing the Yiling Laozu back playing the Song of Clarity; he just didn’t take into account the fact that Hanguang-jun’s guqin song would be able to break the “ghost’s” programming again. Yiling Laozu Wei Wuxian Wei Ying knew this song, even if there was no name for it in his memoy; he knew the person who played it - he should not hurt him.

After fighting side by side for some time, Wei Wuxian and Lan Wangji were able to escape; then with the help of the YunmengJiang and the GusuLan clans, they defeated Su She, Jin Guangyao and their henchmen.

Back in Gusu, Wei Wuxian gets his injuries treated and starts to heal from his brainwashing with the help of doctors and of the GusuLan meditation. After getting in touch again with the people from his past - a past that does not feel that much like another lifetime now - Wei Wuxian decides that he would like to stay away from the cultivation world and its news for a while. He and Lan Wangji roam around the world, helping when they can but most of the time simply enjoying their time together wherever they are. When Wei Ying confesses his love to Lan Zhan again, on a night at the jingshi, this is just the start of a new story altogether.

#wangxian, #wangxian au, #wei wuxian, #lan wangji, #the untamed au, #mdzs au, #as always the headcanons for this au are under: wangxian au, #mine, #this is probably the last gifset of this au, #the title of the notes was like 'soft epilogue', #so that's why like 7/10 gifs are fluFF, #and yes wangxian.mp3 broke the ylz's programming bye, #they roam the world being cultivation partners as they should, #i wish i could read this vs i wish i could write 200k of this, #neither is going to happen but a person can dream :), #idk if the english is correct but.... i just want to share this and be done with it haha, #the quotes are from mdzs + cql, #this is also me saying 'fck you' to m@rvel for doing stucky so dirty, #they couldve had their soft epilogue too, #m writes
72 notes · See All
simgrim-artText

What about a Shigatzu Wa Kimi no uso au

but we’ll stop It here and forget how It ended? 😂

Ok, guys, I am coming to you today with yet another new AU.  This one, though, I’m definitely not going to write, so consider it up for grabs, grist for the collective fandom mill, if you will.

-Lan Wangji is a prospective court concubine, trained in rigid protocol and behavior his entire life.

-So after a series of rejected female partners, they throw LWJ at him.  LWJ is pretty as anything but his personality isn’t the most friendly, so he doesn’t make it to very high ranks, so they try to fob him off on the not-heir.

-They meet, WWX is himself, LWJ is INSTANTLY SMITTEN OMG.  WWX, on the other hand, thinks at least this person seems amusing to tease, so fine, he’ll accept him to keep him company at least. (Insert WWX’s lack of self-knowledge in regards to his bisexuality IF desired.)

-There’s probably some awkward miscommunication where LWJ tries to apply bedroom arts and WWX freaks out, but eventually they settle into mostly talking.  WWX uses him as a sounding board for his ideas (about war strategy? his inventions?) LWJ plays guqin for him and spends most of his time reading poetry or whatever.  Slowly, they fall in love.

-And then one night WWX is drinking heavily and convinces LWJ to join him, and they fall into bed together.  This time, because LWJ is drunk, he plays the part of the aggressor and gets all dominant and WWX is fucking INTO IT.  Here’s this quiet, perfectly behaved servant with impeccable manners just holding him down and being rough and desperate and it’s HOT.  And thus their non-traditional master-concubine relationship begins.

SIGH. I don’t even know where this came from.  I don’t have anything CLOSE to the knowledge of Ancient Chinese court history or concubines necessary to write this…and I haven’t watched enough historical dramas to fake it.  There’s also a bunch more plot that needs to happen but whatever.

Hey guys! I have a new video up and I would love it if you checked it out!

This concept has been bouncing around in my head since my first watch of The Untamed and I think Meng Yao makes a great K Howard, I feel they have very similar personalities. This is of course very au but I hope you guys like it nonetheless.

Also please please look at the warnings in the video description, I do not want to unintentionally trigger anyone.

Beetlejuice the musical au with A-Qing as Lydia, Xue Yang as Beetlejuice, Song Lan as Adam, and Xiao Xingchen as Barbara

Quarantined wwx is so bored 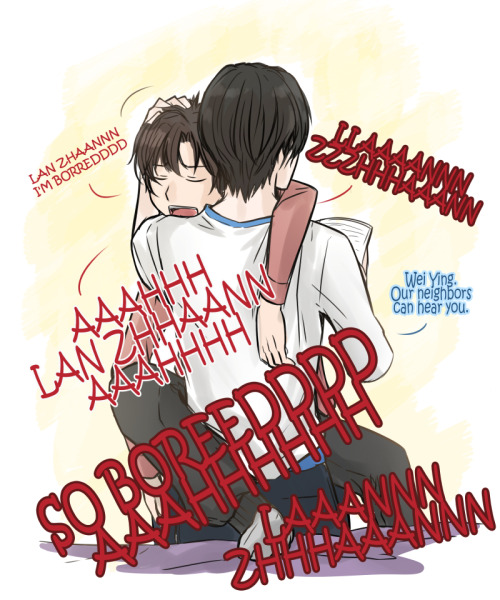 wangxian hello brother au, when wwx the delivery man died in the middle of jin-wen gang mishaps, regarded as a gang member in his death, got his heart given to police inspector jiang cheng after his death, whose heart beaten so hard everytime he saw lwj, wwx’s ‘best friend’, after the operation. and only can be seen by jc, then always appeared suddenly in front of jc at random times while screaming, “hello, brother!”

minus the supposed ending that the police and the person the delivery’s man heart beating for ended up together, heheh.

fyi, it’s based on a pretty old bollywood movie starred salman khan as the annoying ghost lol. pretty much that’s the plot, and in the end they confront the real villains who ended up dead and dragged to hell then the ghost ascended to heaven, with the police and the woman ended up together (in the movie). in original, whenever the police’s heart beat faster in front of the woman, the ghost always said, “hey, don’t like her, okay? your heart beat faster for her coz it’s MY heart!” and the police is quite… i forgot his reaction actually 😂. but in this au, whenever it happened and wwx spout this nonsense, jc always screamed, “YOU THINK I WANT MY HEART BEAT FASTER BECAUSE A FRIKIN’ LAN WANGJI?!”

the end of this au will be almost the same like original i mentioned, minus jc and lwj get together. but 10 years later jc met wen qing, the doctor who saved his live back then (aka the one who performed heart transplant, heh) and her 8 years old son, who screamed at him, “hello, brother!”

this is set in semi cultivation au so their age stopped progressing at certain points so wangxian definitely bound to happened later. jc is very relieved. “at least you’re not using my body AGAIN to flirt with him!”

My first Untamed crack video is finally out! It took me way too long to make but it’s full of concepts I enjoy and I hope people like it!

Promare’s out on digital tomorrow, so I drew something… the wheels have been turning.

#These two have a curious bond, #At least I like to think so idk how invested anyone else is in it but its fun to draw so eh, #My art, #Mdzs AU, #lwj, #wc, #Zookeeper Chao, #Snow leopard lwj
30 notes · See All
Next Page