to my anonymous friend who requested this 5+1 xicheng fic,
this one’s for you!

“Jiu-Jiu” Jin Ling not so discreetly whispers when they’re all sitting around the dinner table. Jiang Cheng has half the mind to hush his nephew, but then decides not to. They’re eating at a busy restaurant by Caiyi Town, not in Cloud Recess. Though, even if they weren’t physically there the two Twin Jades of Gusu bring enough of the cold mountains to their table as if they were.

Jiang Cheng eats his meal quietly, letting the ambiance of the restaurant and Wei Wuxian’s endless blabber fill up the spaces of his thoughts. It was weird to be sitting in the presence of his brother (and in extension, his in-laws?) without the undertones of business and political discussion. Their relationship and misunderstands had more than enough time to simmer in the past decade of avoidance and misery.

Family dinners are weird, Jiang Cheng notes to himself as he eats another bit of rice. It still takes time for him to get used to. Jiang Cheng is used to solitude, whether that be out of situation or not. He’s still taking his time learning how to integrate himself into conversation and such, despite not being very good at it.

Sometimes you just have to draw a tiny garbage gremlin to make yourself feel better. 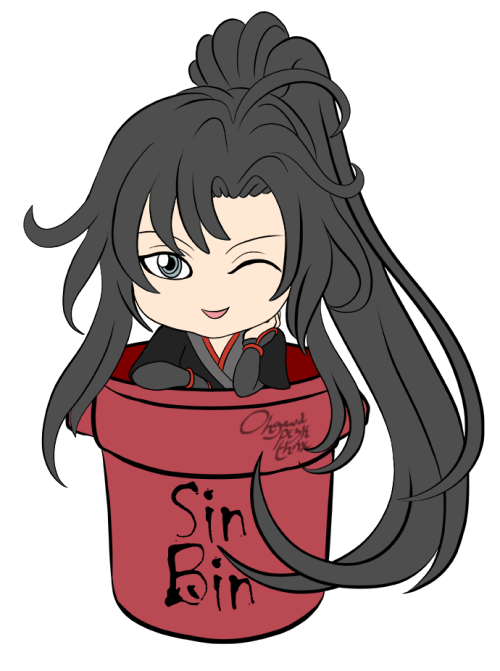 He’d never thought that he would be here again.

Wei Ying knew that he was not welcomed. And even if he did come, he would just be a stranger to all the changes. Even though it was a place that had been rebuilt from the ground up, made to mimic the old as much as embrace the new, everything felt completely foreign to him.

But when he closed his eyes and just sat and listened to the whistling of the breeze across the dock, his heart was pacified. Even just for a moment.

With his eyes closed, it was easier to see shujie’s smiling face. The face that Wei Ying had always imagined angels would have if they existed. He had never had much belief in the Gods as a kid, between losing his parents abruptly and orphaned for more than a small portion of his childhood. He believed that God had failed him or at the very least had more favoritism to other people.

But when God sent him Jiang Yanli, Wei Ying felt like he had something to believe in again. She had the soft and caring hand like a mother, something he knew that she would be great at when they were all grown up. She cared for him like how a lotus would care for its baby pods, large petals protecting the seeds before they could embrace the natural call of growth.

Jiang Yanli was a lotus flower and Wei Ying had always admired that about her.

Between the sweetness of her scent, Wei Ying also could never forget the brothy fragrance of her pork and lotus root soup. Wei Ying doesn’t think he could ever explain how important that one meal was to him. He will always remember her smiling face as he heartily slurped up the trademark recipe of hers.

In his dreams, he always has tears in his eyes. Never for that moment, the last moment between them.

But fall the moments that she could not have because of him.

Somehow—maybe he pitied himself more than he knew—deep down in his heart, Jiang Yanli would still comfort him in the gentle way that she would. In his dreams her eyes had no anger, no blame. With a soft, tender hand on his cheek, she is holding him as the tears fall.

When Wei Ying opens his eyes, they blur for a moment as a tear escapes.

In the lingering incense he offered, he could still smell the hint of sweet lotuses.

the scent of Jiang Yanli, as digested by Wei Wuxian

Hearing the words, something that Wei Wuxian had never felt before sprouted within his heart.

Anyhow, there is this scene in the MDZS donghua Episode 20 at the very end when Wei Wuxian sees events through Wen Ning’s eyes; The scene where Jin Guangshan can be seen in what appears to be some torture chamber / cave, based on the iron chains in the background. And I kept wondering what exactly it is…

Well, I never noticed that most probably it is Su She beside him (and a nameless Jin disciple).

So Wei Wuxian sees with Wen Ning’s eyes, sees some snippets from the past…

The first thing wwx see is: Nie Mingjue, Lan Xichen, Jiang Cheng. Random Jin disciples. Please note the the Lan disciples behind Lxc - the clothes he wears (Lan colors but without the collar like lxc)…

Then, wwx sees the scene with jgs. Jgs walking out of some torture chamber,  framed by the nameless Jin disciple (which I cut out of the gif) and what presumably is Su She. He wears the same clothes as the Lan disciple in the above gif, without a collar, so I am pretty positive that it isn’t lxc we see in this scene (who also had absolutely no reason to be with jgs anywhere…)

Then, in the next scene we see wwx remove the nails from Wen Ning’s head. He says, surprised: “Gusu Lan, Lanling Jin.”

So, presumably, this scene with jgs and sms shows the moment right before/after the nails were inserted into Wen Ning’s head.

And fuck, this hurts. I hurt.

On another note: the subtitles of what jgs asks is the following: “Any progress?” and gets the response(?) “Everything is going well” - though I’d be really curious if that is actually what is said in this scene…

I LOVE THIS DUMBASS WITH MY WHOLE ENTIRE HEART 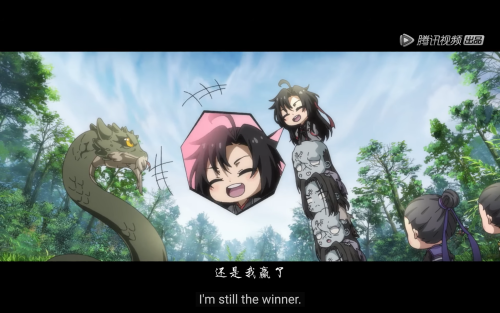 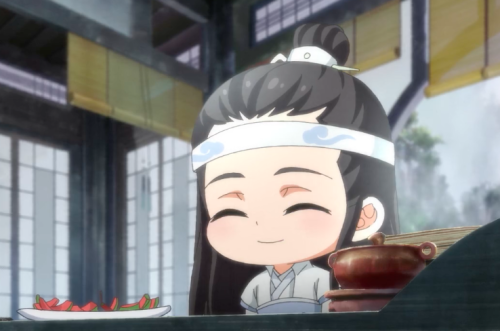 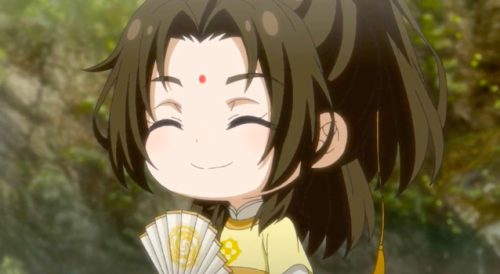 maybe it’s cause its 1am, but I’m suddenly very tempted to buy those “cheap” untamed costumes I’ve been seeing on amazon just to make a video of me trying them on…

(buy me a kofi if you want this video to exist!) 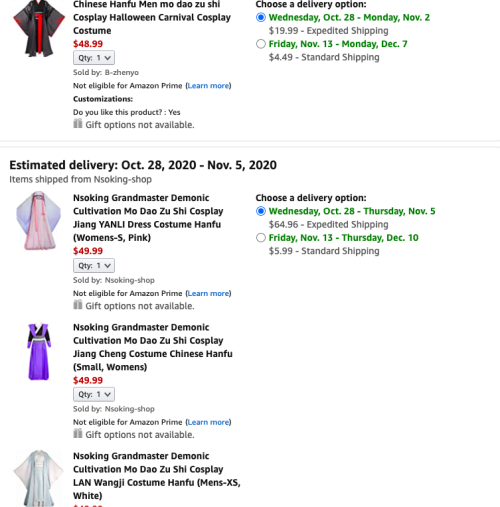 #cql, #chen qing ling, #mdzs, #mdzs donghua, #mdzs manhua, #mo dao zu shi, #wei wuxian, #lan wangji, #jiang yanli, #jiang cheng, #theses are def not the show version costumes, #but they still look awesome, #it is three hundred dollars with expedited shipping, #i say to myself, #but the amusement value, #says my monkey brain, #i dont even have enough followers to monetize this video, #this hypothetical video, #would anyone donate like- five dollars for me to make this stupid video, #blue rambles, #it would be too late for halloween anyway maybe i should just nix the shipping and save myself eighty bucks, #if fifty ppl donated five bucks id be able to do it, #*sixty, #god i can count, #id still do it if it got to like 200, #but it would take two more months cause i wouldnt pay for expedited shipping XD, #HERE GOES NOTHING
22 notes · See All
littlemdzsdumpText

It’s a little cold amidst the change of the weather.

Sat atop the middle seats of the bleachers, Jiang Cheng looks out to the open football field of his school. The afternoon sun that is high in the sky, shines a bit too brightly. But the air is still cold when a particular strong breeze rustles pass the fresh cut grass of the field before him.

Jiang Cheng will take the cool breath of upcoming autumn over the smoggy, loud and rowdy, too crowded cafeteria any day. Sector High may be the biggest and most prestigious high school in the county, but it was still much too overcrowded.

Going into the cafeteria oddly reminded him of being part of cattle.

Jiang Cheng pushes his glasses a little bit higher on his nose. He tilts his head to the side as he looks up at the shelf. Jiang Cheng was not short by any means; puberty had been very kind to him.

But the shelves of his high school library are unnecessarily big. Jiang Cheng sighs as he takes a few steps back and scans the empty aisle for the stepping stool that was usually somewhere on the floor. It seems that the stool’s gone missing. Jiang Cheng breathes out an extra sigh and looks up the shelf again. Jiang Cheng really needs to get that book down.

He checks the aisle one last time before just deciding to step onto the smaller shelf and grabbing it on his tippy toes. Jiang Cheng feels his finger brush up against the spine of the book, but it’s still stuck in between a few others. Jiang Cheng huffs, going on his tippy toes and trying again. But he can’t get a good grip on the sides. Jiang Cheng can already feel his patience waning thin even though he’s barely tried to get the book two times.

Jiang Cheng is one failed attempt away from simply shaking the shelf so the book falls down on him (so be it), when a hand grabs onto the book he’s looking at.

Jiang Cheng follows the hand taking his book just to meet eyes with Lan Xichen, standing directly behind him. Jiang Cheng gulps, stepping down from the small shelf that he was on to look at Lan Xichen. The older senior is a good head taller than him.

“Thanks,” Jiang Cheng says, holding his hand out to accept the book. He’s surprised when Lan Xichen doesn’t simply give him the book, rather opening it and flipping through the pages. Jiang Cheng pouts slightly, bringing his hand stiffly to his side as he watches Lan Xichen begin to read. Jiang Cheng waits for a few impatient minutes before checking his wrist watch. His study hall was going to end in a few minutes. Jiang Cheng huffs impatiently then looks back up to the shelf. There seems to be another addition and since the first book was taken out, the new space should be enough for Jiang Cheng to grab the book.

Without a second thought, Jiang Cheng mounts the low shelf again, and gets on his tippy toes. The spine of the book had just grazed his fingertips when Jiang Cheng felt an arm circle his waist. Jiang Cheng yelps, falling off the shelf and stumbling into the person behind him.

“Careful,” Lan Xichen tells Jiang Cheng like he wasn’t the cause of Jiang Cheng nearly falling and taking the shelf with him. Jiang Cheng’s ears burn.

“I never knew Greek mythology could be so interesting. I’ll have to borrow it after you,” Lan Xichen comments and hands Jiang Cheng the book. Jiang Cheng takes the book quickly.

“The other addition up there isn’t too bad. If you wanted to read something like this,” Jiang Cheng recommends. He doesn’t feel the need to thank Lan Xichen when he’s already said it before. Besides, the longer he looks at the senior, the redder his cheeks get. Jiang Cheng spares one last glance at Lan Xichen before rushing away, to not be any later to class and save what he can of his blushing face.

He doesn’t notice Lan Xichen’s eyes following after him, then back to his recommended read with curiosity.

Maybe he’ll learn about some Greek mythology after all.

Been wanting to do a portrait of sexy daddy Nie Mingjue but of course I just felt like the donghua and manhua versions were missing something.