Atrociraptor and Didelphodon on cliff.

Since Sparassodonts such as Thylacosmilus are as far as we know, probably related to Marsupials, would they've had pouches and reproduce somewhat similar to them?

We don’t know for certain if sparassodonts and other non-marsupial metatherians had pouches. It’s definitely a possibility, but they could also have had a different strategy similar to some modern marsupials that don’t have true pouches:

Close up reconstruction by Jeanette Muirhead.

What: Thylacoleo is another example of an extinct australian megafauna. It was the largest marsupial predator Australia has ever seen, weighing in at 250 lbs (~115kg) on average, with individuals half again as big occurring with some regularity. The common name of ‘Marsupial Lion’ comes from its large size, shortened face, and retractable claws - the latter making it unique among marsupials. The forearms of this predator were very robust and had a semi-opposable thumbs, allowing them to drag down their prey. This interpretation is supported by the morphology of the hindlimbs and pelvis, which suggests Thylacoleo habitually reared up on its haunches. It had a formidable set of teeth as well, the extremely large sets of shearing teeth gave it the most powerful bite force of any known mammal. A find of eight skeletons in a cave in southern Australia suggests these animals lived in packs.

Thylacoleo is in the clade Diprotodontia, which contains living koalas, kangaroos, and wombats, but is not closely related to any of these forms. Rather it is in the totally extinct subclade Thylacoleonidae; all the members of this clade were carnivorous, but some were only as small as a house-cat. Like many other large endemic australian mammals, Thylacoleo vanished just under 50,000 years ago. It is thought some aboriginal cave art depicts this lost predator. The genus was named based on material shipped back to the English scientist Sir Richard Owen in the mid 1800s. 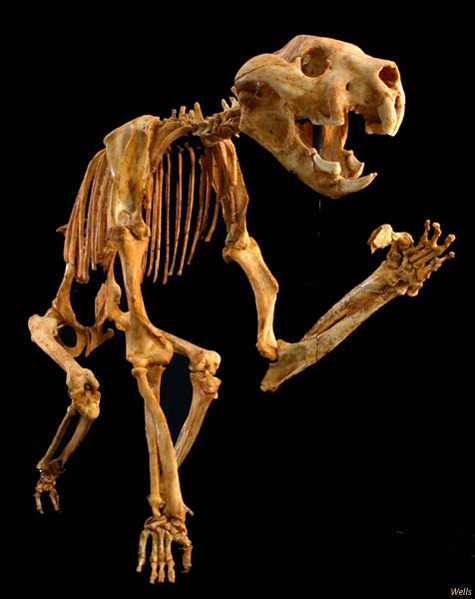 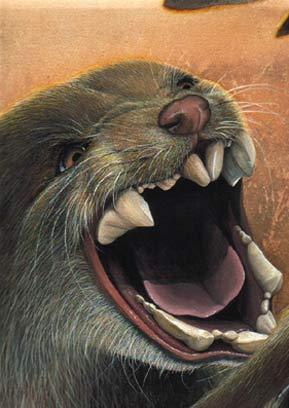 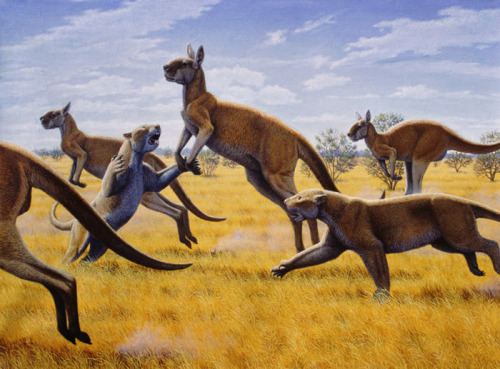 Skull on display at the American Museum of Natural History.

When: Late Miocene to Late Pliocene (~10 million to 3 million years ago)

Where: South America, most fossils are from Argentina, but it was fairly widespread.

What: Thylacosmilus at first glance looks much like the famous Smilodon (sabertooth tiger). But a closer  look starts to reveal many significant differences, such as the extremely large flanges on its lower jaw, which protect the large canines, and the lack of any teeth anterior to these massive teeth. This animal is very far removed from Smilodon, it is not even a placental mammal. It is a metatherian (marsupials are the living metatherians) more closely related to kangaroos, koalas, wombats, etc than to the saber-toothed tiger.  The similarity between Thylacosmilus and Smilodon is an excellent example of convergent evolution - two distantly relating forms converging upon a simular morphology and life habitat.  There are an three other examples of mammals that have developed saber-teeth- in fact most of the last 65 million years had some large cat-like saber-toothed mammal present, the modern biota is the outlier.

Thylacosmilus went extinct roughly 3 million years ago, closely coinciding with the formation of the land bridge linking the Americas. Animals from North America emigrated south and those from South America journeyed north; this fauna exchange is referred to as the Great American Interchange. It is at this time we start to find Smilodon fossils in South America. It is thought that the arrival of this relatively larger predator (the largest Smilodon was twice the size of the largest Thylacosmilus) may have been what drove the only known marsupial saber-toothed form to extinction. 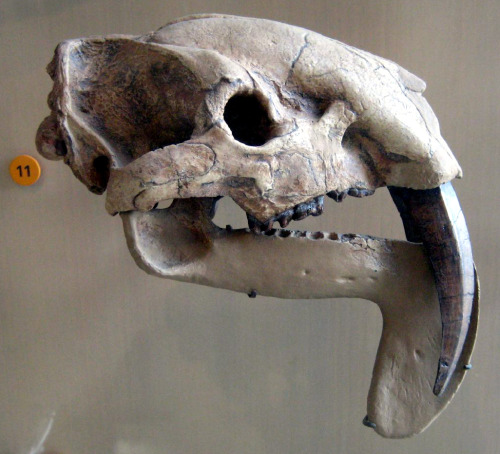