Have a Smol Deku 💖

izutoga crossover for my qpp :)

My Hero Academia - Fanfic Reviews (…hear me out) - Part 1

My Hero Academia Fans here I am with something for you^^ A list of my favourite mha fanfics (not smut and barely with ships at all, or something like that -.- but cool ones)

so Spotify mixed up my playlist covers and. Todoroki listens to Dad music now I don’t make the rules. mido lives in a southern gothic bar in an action movie

Here an AMV I’ve been working on. I’m hoping to finish it soon.

*uno reverse card* no u! Here it is! My first try at headcanons, I hope you like it! I love you, Pepper <3

More if my au, the big 3 introduction! 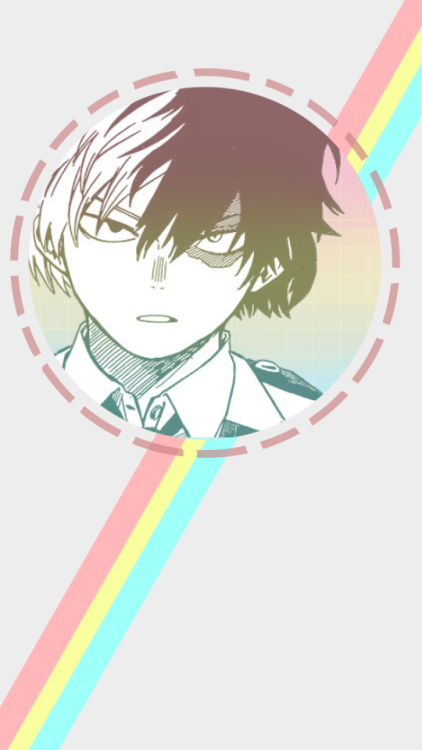 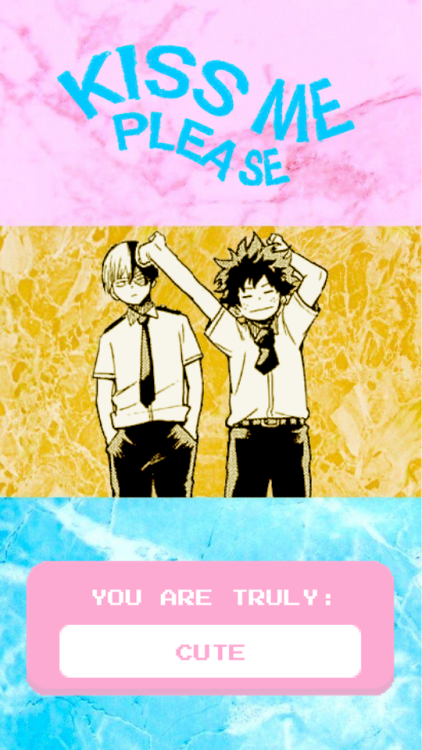 “Hey Hiro, isn’t that where your dad tried to beat that sludge villain when he was little?”

Hiroyuki looked at the exhibit that Miyoko was pointing at. “Yeah, my dad tells me about it all the time. His friend was in trouble and the heroes there couldn’t help him so my dad tried to save his friend all by himself,” Hiroyuki said with a sparkle in his eye.

“Well, your dad’s friend sounds pretty lame since he couldn’t even beat a little slime,” Miyoko said with a grin. “Well, my dad only beat him because he had help from Grandpa Toshi. Heh heh,” Hiroyuki said as he rubbed the back of his neck awkwardly. “Yeah, but your dad is awesome. I wish he was my dad,” Miyoko grumbled.

Hiroyuki looked at her and got ready to say something to cheer her up when the doors to the museum busted open. Two pro heroes rushed in.

“Everyone remain calm. There’s a problem in the building and we need everyone to evacuate immediately.”

The teachers tried to group all of their students up but they were interrupted when the lights flickered off and the ground shook violently. A chorus of screams sounded as an explosion rumbled through the museum causing the walls of the museum to shift and collapse.

Ears ringing, he reached up and touched his head.

Bakugo swayed when he stood up. He stumbled for the first few steps but was over all pretty good for surviving a full blown explosion. He guessed he was just used to them. He kept going until he saw a familiar head of red hair.

“Bakugo! What happened out there man!?” Kirishima asked knowing better than to ask if he was okay. Denki not so much.

“Yeah man, you look like shit.” Bakugo glared at the blonde.

“What did you say to me, Asshole!?” Bakugo went to swing at Kaminari but he missed and swayed forward.

“I don’t need your help, Shitty Hair!” Bakugo said as he swayed more trying to get away from the red head’s grasp.

“What happened back there, man?”

“Woah man. That’s pretty serious. You need to get some medical help.”

“Fine. We’ll finish looking for survivors but after that we’re getting you to a doctor.”

“Hiro!” Miyoko yelled, trying to locate her best friend through the dust and wreckage.

“Miko! I’m over here!” Hiroyuki cried back from under a collapsed wall.

“Don’t worry Hiro! I’m gonna get you out!” Miyoko yelled, trying to calm down her bestfriend.

“Hey guys, I think I hear some kids over here!” Miyoko heard from behind her. She turned around to see heroes running towards her. She instantly recognized them from earlier.

“Red Riot, Chargebolt you’re here! My friend needs help!” Miyoko cried out as she ran over towards the heroes. Kirishima had to do a double take when he saw a carbon copy of his best friend running towards him.

“Hey, are you hurt little girl?” Kirishima asked as she approached him.

“My arm hurts a little, but I’m okay. My friend needs help. He’s stuck under those rocks,” Miyoko said as Kirishima checked her for immediate injuries.

Miyoko turned to face the rash voice. Another blonde hero limped towards the group. She stared intently at the hero, trying to figure out where she had seen him before. Bakugo looked at Miyoko.

“What’s your problem, brat?” Bakugo scoffed when Miyoko stuck her tongue out at him.

“Ground Zero, there’s a kid stuck under here. I’m worried that if we start pulling out rocks, it could bring the whole place down. I’m gonna go around and see if there’s another way to get the kid out,” Kirishima said before jogging around the rubble.

“Wait! I wanna go with you! He’s my friend and I wanna save him!” Miyoko yelled. Kirishima stopped dead in his tracks.

“Miyoko and his name is Hiro, Hiroyuki! He’s my best friend!”

“Look Miyoko. It’ll be safer for you and him if you wait here with Bak- I mean, Ground Zero. I know your mommy and daddy wouldn’t want you to get hurt or lost too,” he tried to reason with the four year old.

“Well, I don’t have a daddy.” Miyoko argued back.

“Well, I’m sure your mom would be really sad if something happened to you. You need to stay here where it’s safe,” Kirishima said with a frown. Kirishima leaned down to her level.

“I need you to protect my friend over there. He’s hurt. Can you be my hero and watch out for villains for me?” Miyoko begrudgingly nodded. She didn’t want to watch over this mean guy, she wanted to save her friend.

Miyoko crossed her arms and frowned but didn’t say anything else as the red headed hero ran around the building’s remains.

Bakugo and Miyoko sat in silence for a few moments before the rubble shifted and Hiroyuki let out a cry.

“Hiro!” Miyoko yelled before shooting up and running to help her friend. Miyoko was fast, but Bakugo was faster even in his wounded state. Bakugo tried to hold her back, but Miyoko was determined to get away and save her friend.

“Kid, you gotta stop, dammit! If you start pulling random fucking rocks, they’ll all fall and crush your friend,” Bakugo gritted out as he tried to contain the squirming Miyoko.

Miyoko eventually went limp in his arms, the frustration getting the better of her and hot angry tears made their way down her face.

“Shit,” Bakugo sighed. He wasn’t good with kids and Kirishima knew it. So, he didn’t see why he thought it was a good idea to leave him here.

“Everything’s gonna be fine, kid. There’s no reason to-“ Bakugo stopped as a new idea ran through his head.

“Hey kid, who’s your favorite hero?” Miyoko looked at him through big watery eyes before answering him.

“Hellfreeze, the duality hero. He’s the coolest. And my name’s not Kid, it’s Miyoko,” she sassed to him.

‘You gotta be shitting me,’ Bakugo thought to himself.

“Well, what would Hellfreeze want you to do in this situation? He wouldn’t want you to cry. He’d want you to be strong so that we can save your friend.”

Miyoko sniffed. “Yeah, I guess you’re right. I wish he was here. He’d know what to do.”

Bakugo suddenly remembered why he decided to never have kids.

Hey guys! Here’s the next part of the series! I hope you like it! Don’t forget if you guys are ever confused on what’s happening or just want to talk about what’s happening, don’t hesitate to ask! I will try to answer all your questions! Also if you want to be added to the tags still, just let me know!

Edit: Okay I feel like I have to clarify because if I didn’t know, it might now be that clear to me. In my fanfiction, Todoroki is one of the top three pro heroes. He also took on the hero name Hellfreeze mostly because I thought it sounded badass 😂 also in the next part, it might get confusing again so I’ll clarify right now. Uraraka let her hero license expire right after she had Hiro so she could protect him at home. Her and Midoriya desided it was for the best, because it was extremely dangerous for them to have a kid while Deku was still the no1 hero. If there’s anything I might’ve missed that’s confusing, just let me know!

THANK YOU FOR READING!

Midoriya is a service top.

* would love it lol

* He would probably love your body more than you

* He loves your ass

* Like deadass he see de booty he grabs de booty

* You have marks in your ass bc of him

* He’s playing , slapping , grabbing all of that do de booty

* he wants to rub de booty

* If you ever twerk on him he’s dead he done

* Somebodys child will get fucked up

* Will never ever ever let you be insecure about your body

* He kisses you stretch marks 🥺

* But don’t get it twisted though

* at first he didn’t peep you were thicC

* Bc your uniform was on the baggy side

* But when saw you in your hero outfit

* Bc damn you one fine ass motherfucker

* And baby boy was so blushy and adorable

* When y’all cuddle his face is in your titis

* Deku never moved so fast , normally he would try to be The bigger person and not use violence

* He punched the shit outta that grape head pervert

* Don’t talk about his girl you clown 🤡

* that boy was not ready for all dat

* But the minute someone gets bold and tries to touch

* Todo finna freeze that bitch hand before they can touch you

* Bro he loves watching you do that shit

* Tho I think he’s a thighs kinda dude

* Shit he plays with your thighs all the time

* He plays with them in class , he grips him while he’s driving

* And he sleeps on them , that’s he’s #1 cuddling position

* He also leaves hella marks on your thighs

* And when you wear shorts she vv smug about it

* Twerk on him I dare youuu , you finna see a different side of todo that all imma say 😳

- ahhh hope y’all like , I hope this cures a bit of your boredom during this   quarantine love y’all :))