synopsis: you and midoriya have a nice chat in the morning.

It was around seven in the morning and you found yourself, dancing around the kitchen as you made enough breakfast for everyone. The food would probably be ready in around forty five minutes because you had to make so much extra since the boys would have several plates of food.

Everyone was starting to get up and get ready, knowing that you were downstairs making arguably the best breakfast they’ll ever have in their life because of the mass text you’d sent the night before.

Midoriya lounged into the kitchen with a yawn. “Good morning, Y/N,” he hummed, opening the fridge to get a bottle of water.

“Good morning, Midoriya! Are you going to train before class?” you asked.

“I actually came to help,” he confessed, “Is there anything I can do?”

Is it a coincidence that the four from class 1A on the Eri rescue mission happen to be the same four with the WORST fashion taste? Is that supposed to have a meaning behind it? People with terrible fashion sense have a knack for rescuing kids? Like, I mean if I was a child I don’t know if i’d be more or less scared if someone wearing crocs and a bro tank came to save me.

y’all are so wholesome,, i love it so much 😭

• he’ll be completely caught off-guard by this at first because he’s just so not used to affection- and verbal affection too? it’s heavenly

• that sort of thing. he probably won’t fully believe it or understand it at first, but you’ll make sure he gets the memo

• and at that realization, he’ll become ecstatic

• i think if you give him enough time to gather himself, he’ll begin to mimick you and try to shoot compliments back at you

• not because he doesn’t mean them, but because he’s not used to verbalizing his thoughts

• “you look so pretty today shoto!”

• his wingmen will totally be helping him out, too

• “midoriya i don’t know what to say to them, they’re so amazing but i’m so… awkward?”

• even bakugo will help out a bit since he actually respects shoto quite a bit. he’s not very good at flirting either though, so it won’t help

[Katsuki and Izuku having an intense staring contest]

Katsuki: eyes drying out, trying really hard not to blink, he’s got to win dammit-

Izuku: just having the time of his life staring into Kacchan’s eyes ♡⌓♡

I really enjoy drawing outfits! I found a bunch of cute ones and then I found an old sketch of these two getting excited over lame things together. I guess this was the natural progression? I spent too much time on this admittedly… 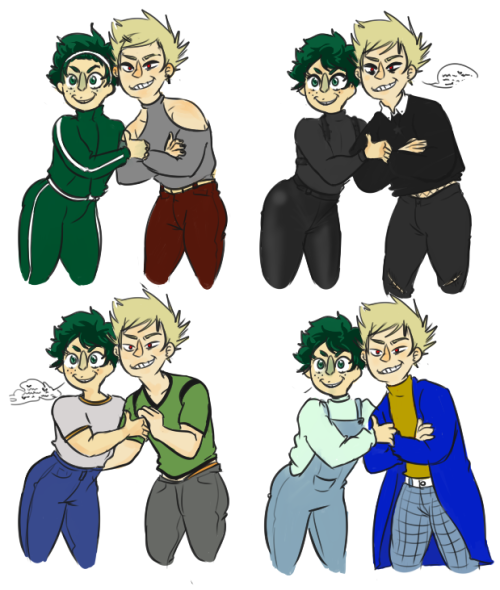 • as you’d expect from someone as upbeat and outgoing as denki, he absolutely adores boldness

• any idea you come up with for the two of you to do, he will love. he’s just excited to be with you despite whatever it is you have planned

• denki is pretty used to being rejected, so having someone who is assertive makes trust easier for him

• for example- you’ll make sure he knows you love him, and he’s happy about that

• i think you would be the one who asks him out first judging by your boldness, and he’ll take it as a fun little challenge

• you brought him flowers before he could bring you chocolates? that just means he’ll have to spoil you a bit more next time to one-up you

• because you’re both going to be trying to challenge each other’s boldness all the time, which will mean surprises and lots of fun awaits

• this boy is a nervous mess- and i think it’s pretty obvious. so expect lots of blushing whenever you do bold things

• i think you’re both going to be a really cute match for each other honestly- with midoriya’s anxiety and you’re outgoing nature, you two balance each other out

• because he’s pretty reckless already, and with you being bold and cheering him on, he’ll be more inclined to go through with his ideas

• despite that, you two are unbeatable when you’re together, there’s no denying that

• and you’ll definitely get along with his friends very well since most of them are bold like you- which midoriya will be ecstatic about, because his friends and you are his life and he’s happy you like them

Midoriya had been your boyfriend for a few months and with your birthday around the corner, he wanted to give you a personal gift; something no one else could give you. It took him quite a bit of thinking and many trashed ideas until he finally decided. He was going to make you a scrapbook.

Iida: Are you ok

Iida: Threapy it is

Aizawa: I’m Gonna get drunk on water and take back my life with a package of number two pencils.

*Playing a board game*

Kaminari: Bi the way let’s ace-ss the situation and Pan out are next move to win.

Jirou: How many puns did you put in there

Shinsou: I’m Alive, not that I want to be but you know

Eri: God gave me anxiety and depression because he knew if he didn’t i would kick his ass

Tokoyami: Anime is my therapy

Mina:I want to be a fucking skeleton.

Sero: For the last ducking time you can dance with Dabi in fucking hell

Aizawa: No it doesn’t

Kaminari: Teachers tell you not to make a mistake but when you do on a test your suddenly not allowed to anymore

Bakugo: You failed math didn’t you?

Aoyama: Sending a picture of a bird with Barbie legs: I have ✨B L E S S E D✨ your eyes

Aizawa after grading his kids papers: I need a drink

Mic: bring one for me as well

Tokoyami: Fine but make it painful

All might watching bakugo and Midoriya fight: I feel like a that can go terriblely wrong or amzingly good

Midoriya doing a school servay: do you think about death a lot?

Midoriya liying be sue he Doesn’t want to talk to the school counselor: No

Aizawa: your supposed to be the smart one

Midoriya: With all do respect I’m book smart not common sense smart.

*Momo and jirou getting into a fight*

Momo: last week I saw you walk into a flag poll because you where readings book

Jirou: In my defense the poll should have moved out of the way

With Mirio, Midoriya, Kirishima and Tamaki

Okay,, I have so much nsfw and like a tiny bit of Sfw so have this, it was so fun to write. It feels so short, so I’ll be adding headcannons later on, I hope that’s okay.

Thanks for the request Taki ;; Ily

Not really, but that’s how any person watching would have seen it.

Kirishima had been complaining about being hungry for a while, stating that he was going to ‘die’ if they didn’t eat something.

Midoriya had his arms already full, carrying everything he’s bought in the short amount of time they had been there.

They’ve only been at the mall for a damn hour.

Tamaki was walking with his head down, as close to Mirio as possible in hopes of the attention people were giving his friend group wouldn’t be averted toward him.

His boyfriend simply smiled, wrapping an arm around his shoulder and pulling him closer as they listened to whatever Kiri and Midoriya were talking about.

“Dude, you literally bought all the All Might stuff in the store.”

Mirio couldn’t help but laugh, earning the two boys’ attention, Tamaki smiling a bit at the sound of his loving boyfriend’s laughter.

“Togata, we should probably go get some lunch, I’m a bit hungry now, too.”

“..Me too.” Tamaki whispers from beside the other third year, grip on his bag tightening as the three turned to look at him, Mirio asking what they’d like to eat before splitting up to go get their desired food.

I felt like drawing End of an Era!Izuku, aged 19 - just before he’s sent back in time. The resistance didn’t have much in the way of resources, so it’s whatever they could steal or ‘appropriate’. The red scarf is part of one of All Might’s old costumes and the V symbol is the symbol of the resistance! 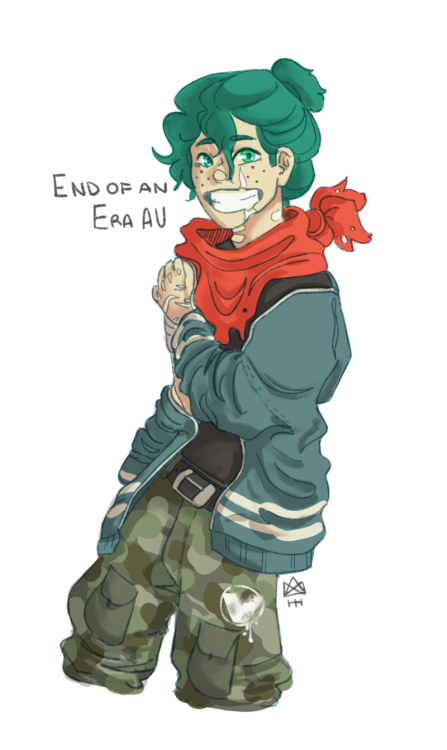 our favorite all might fanboy picked up a hobby over quarantine 💕

Saw this screenshot and this was all I could think about

note: diverges from canon like the tiniest bit, i hope u guys can forgive me ;-; and also!! tysm for the support for part one guys! i really didn’t think it would even garner twenty notes but we’re sitting at almost 100! so, without further ado, here’s part two! enjoy everyone! <3

part one is here (highly recommend you read it first, but they both work as stand alone one-shots)

My Hero Academia: Class 1A Big 3 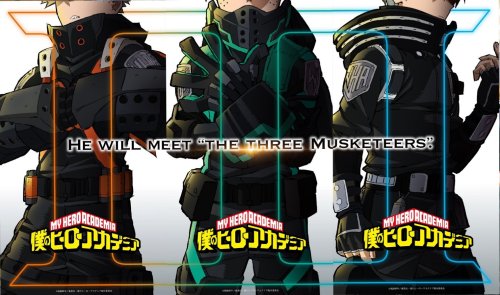