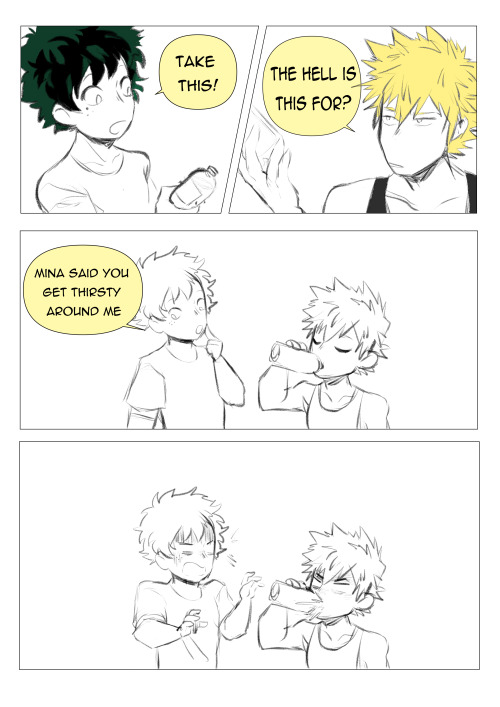 His brow is creased with concern, eyes spilling over with it, and he looks like he wants to hug Hitoshi but is too afraid to. Honestly, Hitoshi wouldn’t be opposed if he weren’t so worried about getting blood all over everything Midoriya has on. Midoriya’s hands are warm and timid, shaking, when they touch his face and, before Hitoshi is even processing it-

It’s only after Midoriya tilts his head to kiss him more firmly that Hitoshi realizes what’s happening.

“Falling in love was never in my plan. Until one day I just realized that I loved this person way too much.”

At Shouto’s house, the quiet was stifling, afraid to be broken. It settled over everything like a fog. This quiet was broken only by Endeavor’s stomping when he returned home after patrol. Even when he wasn’t home, Shouto and Fuyumi tiptoed around, jumping at every small noise. The quiet existed only because of fear, and Shouto despised it. So when Midoriya offered to let Shouto spend the break at his house, Shouto didn’t hesitate to accept — although maybe he should have, given his predicament.

Anyone else look at Izuku’s fluffy, bushy hair and just have the sudden urge of wanting to run their fingers through it? I just want to touch it at least once.

Please say it’s not just me~

I wanted to participate in #MarchOfRobots2020 with this BNHA robofighters AU, but unfortunately couldn’t make more than one concept. And I’m kinda one day late

I don’t know what to title these but for some reason I kept humming Happy Pills when drawing.

Deku: hello what can i get you to eat or drink?

Todoroki: a smoothie without ketchup please

I vibe with this 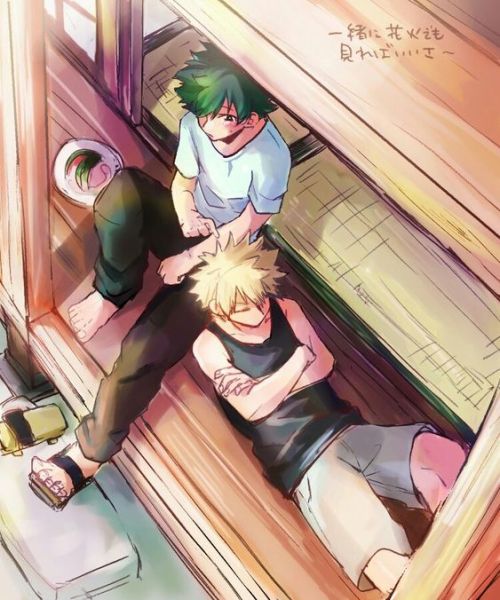 “Ah shit.” Midnight looked at the pregnancy test with a frown before throwing it the nearby garbage bin. Sitting down on her toilet the pro hero looked at the trash bin as she ran a hand through her hair. Damn it, she literally just got a hero license and she was already knocked up. Not exactly the best thing for the newly dubbed 18+ hero.

Getting up she entered the kitchen of her small apartment, heading to the phone on the wall. Who could she even call? Her mom would be pissed…dad, who knew…

She grabbed her black book off the counter going through the many, many numbers she’d been given. It occurred to her that she didn’t even have a clue who the dad could be. Flipping back a few more pages she saw a familiar number and began to dial. He might know what to do.

“Can’t complain, most of them are bright kids.”

“That’s good…” The two young heroes sat in the bustling coffee shop. Nemuri stared down at her iced coffee while Aizawa picked at the cinnamon roll he ordered.

“What did you want to talk about? It sounded pretty impor-”

“I’m pregnant.” Nemuri cut the man off. He stared for a moment.

“That’s what I said.” The woman sighed as she tapped her nails. “I don’t even know who the dad is and have no idea what to do.”

“Are you keeping it?” Aizawa asked, the air of awkwardness around then weighed down like a blanket.

“Yes? No? Maybe. Honestly I don’t know. I needed to tell someone who could keep it a secret. Just until I figure out what to do.” Despite the heaviness of the situation, Aizawa snorted. “What’s so funny?”

“Nothing, I just thought about what would’ve happened if you told Yamada.”

“God, I don’t even want to think about that…” The woman snorted. “What do you think I should do?”

“Honestly? No idea. But whatever you need I’m here for you.”

“I’m going to hold you to that.” Midnight smiled. At least she had one person there for her.

“YOU’VE BEEN SAYING THAT FOR THE LAST HALF HOUR! GOD-WHO DOES THIS ON PURPOSE?!” Nemuri squeezed Aizawa’s hand tighter as the contractions got closer and closer. Everything felt like it was on fire and she was almost sure she broke the black haired man’s hand by now. The doctor at the end of the hospital bed was trying to calm her down but after having gone through this for almost two days now she was ready to get it over with.

“Little guy’s crowning-” The woman had tuned out for a moment before she heard it. Crying. Loud wailing from her newborn. She opened her eyes, finally letting go of Aizawa’s hand as she looked over at the doctor.

“Is…Is it finally over?” She managed to get out as the crying started to quiet down. The doctor handing a wriggling bundle of blankets over to the pro-hero.

“Congratulations. It’s a healthy baby boy.” The doctor smiled, looking between her and Aizawa. “I’ll give you three a moment alone.” The man left and Nemuri looked down at her newborn’s face. Freckles. That was the first thing she noticed. Running a finger along his tiny, pudgy face. Strands of green hair were just visible from under the blanket. She couldn’t hello the smile that crossed her tired face.

“Any idea what you’re gonna name him?” Aizawa asked, nursing his bruised hand.

Ok, so during quarantine I’ve been very bored. So to keep me entertained, I’ve been on Ao3 just reading bnha fics. Well, @thefluffyvillain-fluffmaster has done it again and created another master piece for people to enjoy. The story that this small piece of art belongs to is “Independent.” It is the cheerleading scene from the sports festival.

If you’re reading this fluff, I just wanna say to keep up the good work and that I can’t wait for the next update.<3

Imagine changing in the locker rooms at Bnha and being a male, so you have to reremember that Midoriya is ripped. Like this dope actually has muscles and it’s so wack.

fairy izuku 😳 djslsidjsoaijsosjdos I couldn’t help it, the idea was just so cuteeeee I was inspired by @birds-have-teeth and I’ve never been the same since 😣

Oh my gosh thank you for asking about the dragon shifter au!!! 🤭☺️

@no-one-told-you-life-was-gay and I weren’t expecting anyone to really listen to our little rambles, but then there was fanart outta nowhere after the drabble and it was surprising and now asks ???? You’re all gonna make me emotional 🥺

Anyway, here are the answers! ^^

Yes, like everyone else, Midoriya is indeed a dragon shifter. For context, in this au, Quirks sort of become the ‘dragon breath’ all the dragon shifters use (hehe not a KNY reference lmao), and in circumstances where it’s not exactly possible to change their Quirk into a breath, it defaults into fire. But fire breathing isn’t looked down on or anything. It’s just a type of breath.

For example, Enji, Dabi and Shouto are all fire breathers. Dabi breathes blue fire, and Shouto can alternate between his usual flames and icy breath, kind of like a hailstorm if he really puts effort into it. Eijirou, of course, since Hardening doesn’t work in this au, is also a fire breather, due to his manly, fiery passion! Every breath is respected. (I’ll leave the rest a mystery in case you want to know more about certain characters! Also don’t wanna make this too long.)

Midoriya, however, was a late bloomer. Yes, he could shift into half-dragon form at some point much later than everyone else (human body but with horns, wings, tails, fangs, and sometimes dragon eyes and special capabilities like better senses and their individual dragon breath) then proper dragon form even later, but he didn’t have a breath for ages to the point where everyone thought he would never have one. That is until Certain Things Happened. (Yup, another mystery for y’all to find out, and also for the sake of keeping this relatively short.) So to answer your question, he’s a green dragon with lightning breath at last! Denki also falls into this category, though his breath is yellow instead of green! (We thought doing land, sky, sea dragons etc would complicate it too much.)

I’m guessing you’re asking for the height difference between Katsuki and Shouto huh, since that drabble mentioned Katsuki’s dragon form’s height (30 feet tall) 😏 Shouto is a smaller dragon, and self-conscious about it, so we’d say he’s about 23-25 feet tall.

We hope that answers your questions for now! And I’m sure Gay Life wouldn’t mind if any questions were also directed to xir inbox! :D

This smile. We must protect this smile. This is the most wholesome smile of the local U.A. cinnamon roll.

Also Eri holding on tight to his leg is EVERYTHING!!!