Tumgir
AboutPrivacy Policy
AboutPrivacy Policy
Visit Blog
Explore Tumblr blogs with no restrictions, modern design and the best experience.
Fun Fact
Pressing J while looking at a Tumblr blog or home feed will scroll up on the page, pressing K will scroll down. This is helpful considering a lot of the Tumblrs feature infinite scrolling.
Trending Blogs
#miocene
geoscientifix
Text

Every third week, a British Royal Mail ship begins its journey from Cape Town to Saint Helena, the remote island in the Atlantic where Napoleon was once in exile.

It’s like the end of the world in the middle of the Atlantic. Five days, with a northwesterly course, and only then do the sheer black cliffs appear in front of RMS St. Helena. The island’s 4500 residents are often waiting impatiently for the ship’s arrival and panic if the schedule changes. Director Thomas Denzel and his team went on the journey to Saint Helena and met the people living on the island. Many of the residents are descendants of people who were sent into exile there by the British crown - the most famous among them, the French Emperor Napoleon. This is a report about life at the end of the world, loneliness, unique vegetation, and a very special journey. 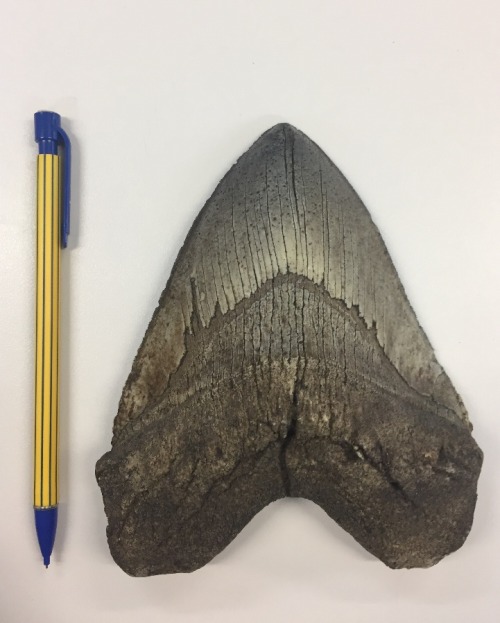 Fossilized conifer trunk at the entrance of the village of Varos in Lemnos. The creation of the fossilized forest of Lemnos with exceptional findings in excellent condition is due to the volcanic activity of the Miocene period, ie ~ 20 million years ago! Miocene deer (Part III) I’ve reconstructed under the supervision of Prof. Beatriz Azanza and Dr. Daniel DeMiguel for a project funded by the Department of Earth Sciences of the University of Zaragoza.
From left to right: Procervulus praelucidus, Procervulus ginsburgi and Procervulus dichotomus. 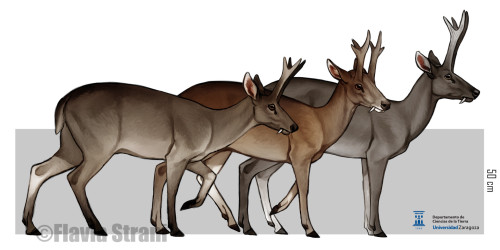 Oreodonts like this Merycoidodon were amongst the most common critters in their environment, browsing a diversity of vegetation, and maybe, even supplementing their diet with meat from time to time.

Our upcoming 5th member of Paleo Pals® is an animal from close to  the same time as these oreodonts… Any guesses?

Dinocrocuta gigantea, a huge relative of hyenas from the Neogene grasslands of Africa and Eurasia. About 2,6 meters long and 1,4 m tall at the shoulder

This is a recreation of Kogiopsis floridana, a toothed whale that lived in the Miocene - Pliocene (12.5-2.5 mya) in what is now Florida, Georgia and the Carolinas. Little is known for sure about this cetacean species, as most of the data come from mandibles. Kogiopsis had very long teeth, 3–12.7 centimetres (1.2–5.0 in) long, without root. It was likely that this whale preyed upon animals such as squid, and perhaps pinnipeds.

The merit of identifying a new genus apart from the known Kogia genus was pointed out carefully by R. Kellogg in 1929:

DIAGNOSIS.-Skull unknown. Mandible incomplete, but symphysis estimated to comprise one-third of its length. In general conformation similar to corresponding portions of mandibles of Kogia, but differs in having broader symphysis, six instead of eight teeth on symphysial portion of ramus, alveoli not extending over so far on lateral surface of ramus, and in addition is much larger. Rami firmly ankylosed in region of symphysis; dorsal surface of symphysis rather broad and flat; lateral surfaces of rami slope to mid-line of ventral face of symphysis. Large alveoli located on upper outer edge or angle of mandible. Ten teeth in each mandible, of which six are lodged in symphysis. Teeth long (3 to 4 inches in length), somewhat curved, with small crowns, without distinct neck, and rather closely spaced. Outer surface of cement wrinkled and ornamented with coarse longitudinal grooves. Outer surface of internal cone of dentine encircled by fine ridges.

Not everyone is as convinced,

“We don’t really know what Kogiopsis is, if it’s a kogiid, physeterid, or stem physeteroid; further, all we have is a mandible with some teeth, so we don’t know what it looked like externally.” - Boesse

Final for Thylacosmilus atrox. In the 1920s Captain Marshall Field funded two expeditions to South America which were undertaken by the Field Museum of Natural History in Chicago, Illinois; these expeditions were launched under the hopes of finding fossils of mammals and other animals from the Cenozoic Era. In 1926, during the second expedition, a team was searching the Ituzaingo Formation in northern Argentina when they came across the remains of three animals thought to be never before discovered species of ancient marsupial.

South America was prime real estate when it came to new discoveries due to it having been almost completely cut off from the rest of the world since the beginning of the Cenozoic and so expectations were high when it came to finding some uniquely adapted mammal specimens, it wasn’t until 1933 when paleontologist Elmer S. Riggs named and described the specimens found on the Marshall Field Expeditions that science would realize just how right they were about the mammals of that time and place.

Thylacosmilus (meaning: “Pouched Knife”), was a member of member of a group called Sparassodonta, once thought to be true marsupials it is now considered to be a closely related group. Despite their resemblance to later placental predators like Smilodon fatalis, they were not closely related to them at all. Their saber teeth are an example of convergient evolution, where different, unrelated species develop similar traits to fill similar niches. Unlike felids, it’s teeth grew backwards into their skull the older they got, they also did not possess retractable claws like most cats. Due to their short legs it’s likely T. atrox were ambush hunters.

It was roughly 4.9 feet in length and weighed around 330 pounds and it lived during the Late Miocene to Pliocene, roughly 9 to 3 million years ago. 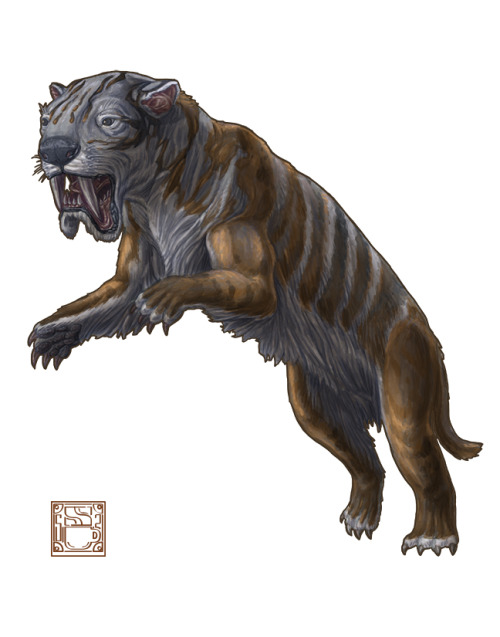 The miocene begins, during this age further global cooling takes place leading to many brief ice ages heralding the begining of the Pleistocene Ice Age, during this time large predatory whales such as the levyatan whale emerge and the first hominid species of apes began to develop until as recently as 4 million years ago. Apes would also split into the gorilla species during this time around 9 million years ago which impacted the initial rise into sentient men.

This species of Miocene shark (which lived about 15 million years ago) was once thought to have been related to the great white shark. Now, many believe it to actually be a distant cousin of the mako shark. This shark is thought to have been about 50 feet long and have weighed eight times more than a great white and to have hunted whales as it cruised the oceans. 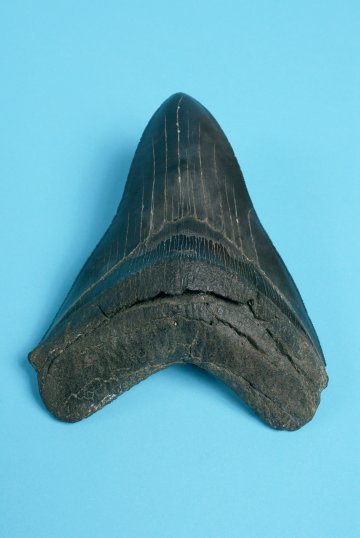 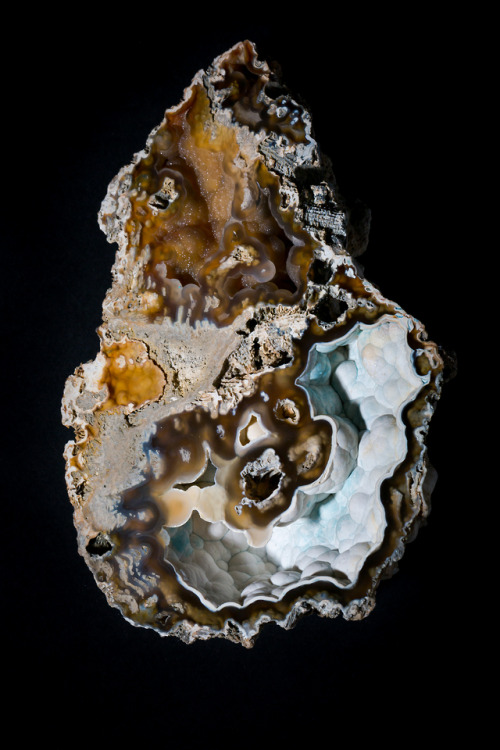 A large Kelenken guillermoi, with plumage based off of its living cousin, the red-legged seriema. 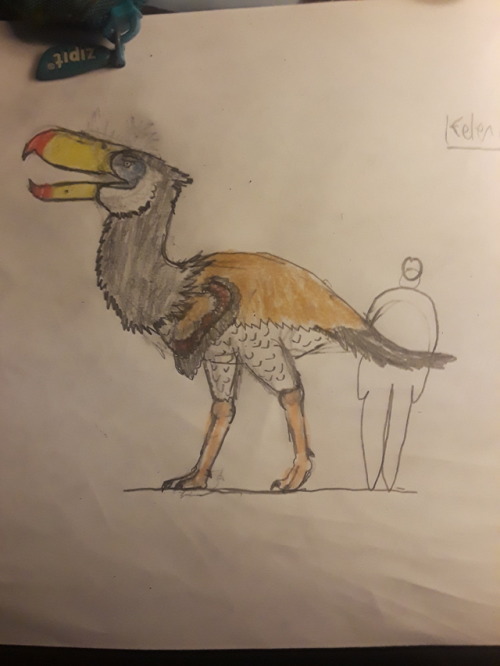 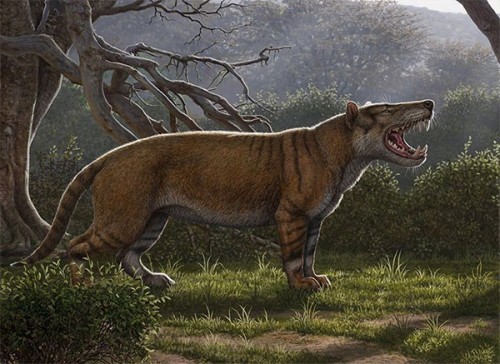 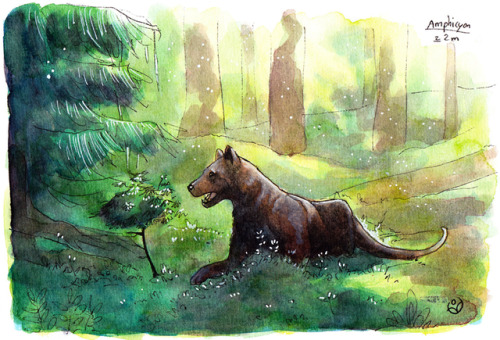 #paleoart#miocene#amphicyon#prehistoric things#this is my general art tag
1K notes
palaeopedia
Text
#animal#mammal#europe#africa#miocene#pleistocene#eurasia#evolution#oligocene#asia#science#holocene#giraffe#nature#extinct animals#hippopotamus#pig#Okapi#Shivatherium#Camel#Llama
49 notes
volcarona-the-fox
Conversation
<div> the adventures of the epochs™ #1 </div>
Holocene
(points to her computer) Hey Miocene, Pliocene too! I found an image of a Megalodon dabbing! I loove memes!
Miocene
Argh... ew.... stop it why must an awesome animal like this be ruined?
Pliocene
This is bad... OH WAIT NO DABBING IS COOL TOO LET ME DAB! (she dabs)
Miocene
I'm out of here...
#epoch gijinkas#epoch oc#cenozoic#miocene#pliocene#holocene#megalodon#new series#should i draw it?#i want to bring back my series of escavalier and accelgor's adventures tho#megalodon dabbing does exist#dab
0 notes
volcarona-the-fox
Photo 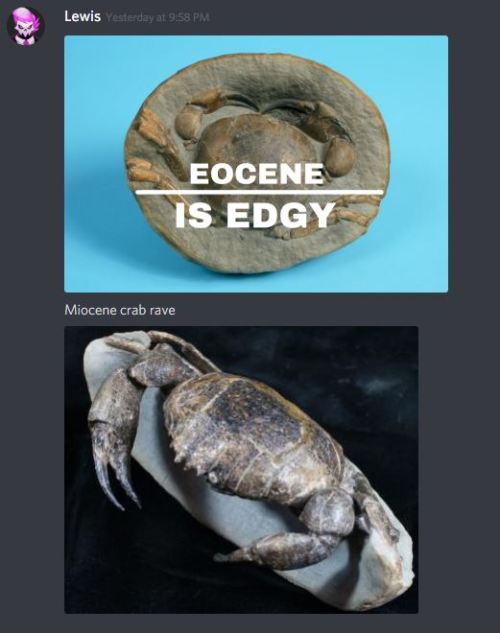 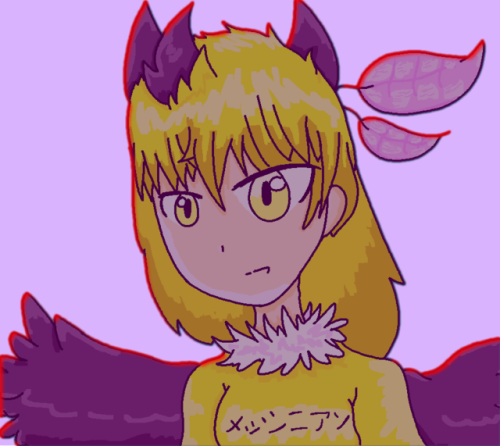 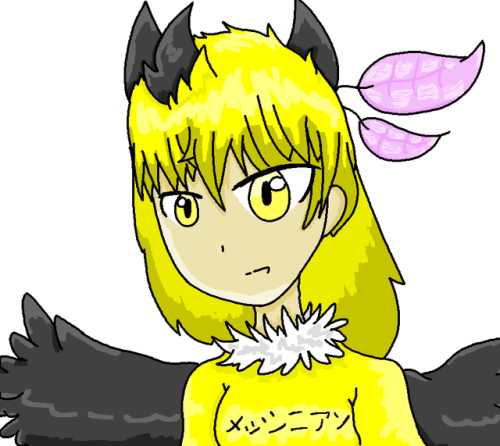