*Johnny looking at nothing*

Johnny: The ocean is a soup!Sub-Zero: WHAT??!

Johnny: Tell me, what does a soup need to be a soup?

Sub-Zero: Water, vegetables, salt and …- MY GOD, THE OCEAN IS A SOUP!

*Scorpion seeing everything*: Elder gods? Please take me, it can be contagious.

Sure!! Sorry this took forever, but I’m finally clearing the last of my really old asks! 🌈 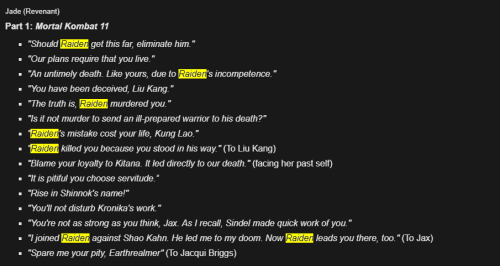 CEO: Okay, we need to desexualize Jade, give her purpose and relevance to the story. How do we do it?

Writer: Let’s give her a love interest - big manly man so we can make her whole story arc revolve around love story pulled out of our behinds. It’s gonna make her so popu-

WOMEN DO NOT NEED A BIG MANLY MAN TO LOVE IN THEIR STORY, YOU CAN JUST MAKE THEM BADASS.

Just wanna quickly sum up everything i have to say about Erron’s age so no one starts claiming that the age gap between Erron and Eden is too large [honestly if you were gonna do that mind your own business. once someone is legally considered an adult they can do what they want as long as it’s not hurting anyone]

Someone Really Said That Jax Is Being Played By Steve Harvey 😆😆😆

Some Subscorp per request of a friend!

It won’t be good but at least I had fun.

Man, I’m not so sure how I feel about this one. It was better in my head but, I’m not so sure now. Anyways I’m making this into a very short series. I’m also working on another story for mk11 so Im gonna be busy busy busy😬. Anyways enjoy!💜💜

I groaned as I tried to escape from the chains Shao Kahn’s people had me in, but to no avail. Gosh, I was so beat up. He allowed his people to torture me to make me talk.

“Let me go!” I yelled. However instead, I was kicked in my leg, making me fall to my knees. One of them forced my face up to look at Shao Kahn by pulling my hair.

“Well, well, well. Y/n, the tempest, here at my throne. To what do I owe the honor of seeing you?” He said sarcastically.

“You fucker! You kidnapped me!” I spoke loudly, but was kicked in the stomach by one of the guards, making me yelp in pain.

“Shut it, or we will cut your tongue off” One of the guards spoke.

I looked up again at Shao Kahn and saw a man standing next to him. The man behind it all…Erron Black. That smooth gunslinging fucker. He’s the one who caught me.

We were all in a massive battle and right as I was about to escape, he shot my leg and then my side, making me fall quickly and allowing him and the others to tie me up and take me.

This whole thing has been a shit show. For some reason, this god named Kronika messed with the timelines and now some of us are from the past, present, or future; according to Raiden. I’m from the present…at least I think so, I’m a little confused about it still; while the rest are from the past or future. I’m definitely ahead of Shao Kahn though because I defeated him, along with his army. Now the tables have turned because of Kronika and my life is in danger.

“Now, y/n, you will tell me where Raiden is so I can once and for all end his life!” Shao Kahn said, getting close to my face.

I gritted my teeth and let my anger get the better of me. I spit in his face, causing him to grab me by the throat and push me against a wall. I was quickly losing air and I needed to do something quick

“I will find Raiden, with or without you!” Shao Kahn said, gripping tighter around my neck.

Just as I was about to lose consciousness, a door was suddenly heard open and a girl, Kotal Kahn, Jade, and Kitana were all there. Kitana quickly threw her fan at Shao Kahn and sliced his face, causing him to yell in pain, letting me go. I gasped for air and was thankful to be given a second chance.

“Well, what are you waiting for? Attack!” Shao Kahn yelled and suddenly another fight broke loose.

I saw that two of Shao Kahn’s men were about to attack Kitana and so I regained some of my strength to help her. I saw two swords on Shao Kahn’s throne and so I used my power to move them. Dark shadows started to wrap around the sword and lifted them in the air. I aimed each of them at the men and just as they were about to strike Kitana, I snapped my fingers and the swords sliced right through their heads, killing them instantly. Kitana looked back at me and nodded, fighting off more men. I tried to get back up to help fight off the rest of them, but was interrupted by Erron Black again. He shot at my hand and made me yell in pain. He walked up, his gear clanking against his other gear. I tried to move, but he stepped on my hand, putting more pain through my hand. I cried out in pain as I felt my whole body tense up.

“You didn’t think I’d let ya get away now did ya, darlin?” He asked, cocking his gun right at you. He kicked as hard as he could in your kidney, making you groan again. You blacked out a bit and before you could stop Erron from hurting you, his gun shot at me.

“Dad no!” We both heard and just as the bullet was about to hit me, it stopped, making both Erron’s and my eyes widen.

We looked over to see a girl almost the same age as Cassie and Jacqui. She had brown hair with a f/c streak in it and s/c skin. Her eyes were also brown. She moved the bullet away from me and shot it through three guards over and over again.

I looked up and saw Erron distracted and so I took the opportunity to use my power again. I was very weak so I needed to be careful. I quickly moved my energy to my right hand and quickly blasted him with an energy blast, sending him flying away.

“Yeah…I’m fine. I think I just-wait, did you just call me mom?” I asked her with widened and confused eyes.

“Shit, talk about not blowing your cover…” she said.

“Look, we will talk later. Right now, we need to get you to safety.” She said, helping you to your feet.

You two ran, but you stopped as you saw all hell breaking loose.

“What are you doing? Come on!” The girl said.

“I can’t abandon them! I need to help!” I said, turning around.

“Then I won’t survive!” She said, making you look at her like she was insane.

“Kid, I think you hit your head a little too hard. But no matter, I’ve got to save them.”

Suddenly, a scream was heard and we both turned to see Jade thrown against a wall with a knife in her arm by Shao Kahn. I frowned and was finished with this.

My eyes started to glow a dark red hue as my body started to levitate into the air.

The ground started to rumble and crack, making everyone stop in their tracks.

“Stop! No it isn’t worth it!” The girl said behind you, but you ignored her.

You raised your hands up and suddenly huge black spikes came out of the ground and grew larger from there. They grabbed each of Shao Kahn’s army and crushed them into two. I then grabbed Shao Kahn, Erron, D'vorah, Kano, and Skarlet.

“You all have passed your limits! It is time someone puts an end to your reign!” I said with my deeper voice. Erron tried to shoot his gun at me, but a group of my shadow hands quickly grabbed him and raised him to the sky.

“You…you’re the one who kidnapped me…and for that, you will be punished” I said. I raised my hand and slowly started to take his life away, watching the life slowly leave him. I smirked as my body started to turn purple. My lower legs and my forearms were a dark purple and my hair changed to a dark black. My clothing quickly changing into my armor, finishing it all off with my head piece.

“Stop! You can’t kill him! This isn’t you!” That girl yelled again, grabbing my leg. I looked down at her and frowned.

“Of course I can! He tried to kill me! He deserves death, as do all of them!” I yelled.

“No they don’t! You told me yourself that everyone deserves a second chance! Even when they are at their worst!” She said, making you frown

“I don’t know what you’re talking about. I would never say such a thing!”

“But you did! Future you did!”

I stared at her for a while longer, before looking away

“I’m sorry, but I have to do this to save my people and my friends!” I said, raising my fist in the air and bringing It down to Erron.

And that’s the end…jk. part two will be up soon. Thank you for reading! 💜 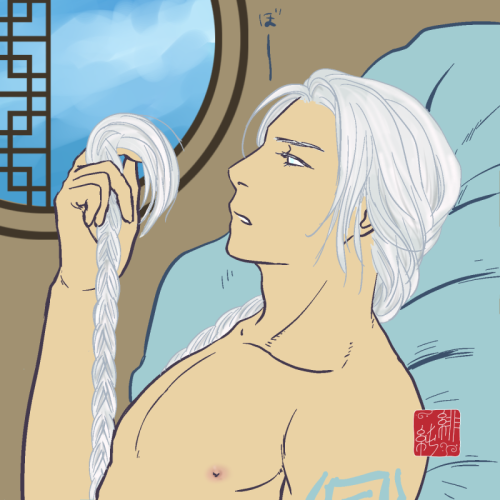 Being a Fujin simp is kinda cool bcs rn I’m at my room, electric fan is on and the winds woooshing my head and now I can just pretend it’s Fujin giving me head pats or something