“You must never let the sun go down on your anger,” one of his sixth cousins advises him. “If you fight with your husband, you must make up with him before you go to bed. Neither of you should ever have the chance to sleep on it.”

“I do not fight with my husband,” Lan Wangji says, bemused. “I have never fought with him, not since the Sunshot Campaign.”

And then, a little smugly, he adds–

“The only thing we quarrel over is my attentiveness to him. He thinks I dote too much, and I believe I do not treasure him enough. But I have swayed him on that subject every time, so it is irrelevant.”

His third cousin, Lan Liu, throws up her hands in dismay. “Wangji! It breaks my heart to see him reject you so cold-heartedly–for heaven’s sake, at least listen to us! Of course an outsider would know nothing about the strength of a Lan’s love, so I do not mean that he is in the wrong exactly, but still–how can you bear it?”

Wei Ying, rejecting him! Lan Wangji nearly laughs out loud–how could anyone say that Wei Ying rejects him, when his hands began to grasp for Lan Wangji’s sleeve the moment he leaves their bed in the morning, and when he quivers like a crimson maple leaf whenever Lan Wangji touches him? If anyone–anyone at all–ever saw the way Wei Ying glows when Lan Wangji praises his cooking, or takes a second helping of it, or fusses over Xiao-Yu, how could they even dream that Lan Wangji’s love was being rejected?

Marriage has been everything Lan Wangji ever dreamed of and more (save for the worrying development of his husband’s increased lethargy in the evenings and the way anything too sour or spicy seems to make him ill–but the cure for that turned out to be bland, plain foods and plenty of rest, thank heaven) and he is so heart-breakingly happy that Xichen can hardly keep himself from laughing out loud at the sight of him.

“Being married to him is bliss,” he says softly, his lips trembling at the memory of Wei Ying combing his hair for him that very morning, and helping him dress it and tying on his ribbon before kissing him goodbye. “I am happy, Liu-jie. So much so that I can scarcely hold it.”

(meanwhile, on the other side of the Cloud Recesses:)

“Lan-san-gongzi!” a little voice shouts at the gate fencing off the rabbit field, as Wei Wuxian sits on the other side of it with Xiao-Yu and a heap of baby rabbits piled up in his lap. “I’m here to–to challenge you!”

Wei Wuxian squints against the afternoon sun and jumps at the sight of one of Lan Zhan’s little cousins glaring down at him.

“Little Lan Li? What are you doing here?” he asks. He recognizes the little boy from Sizhui’s infant calligraphy lessons, and then bites back a snort before deciding to go along with whatever chip the child seems to have on his shoulder. “And challenge me, A-Li? What for?”

“For breaking Hanguang-jun’s heart, and flouting all the laws that govern a good and happy marriage! Now stand up and fight me like–like a true, honorable and chivalrous gentleman!”

a quick sketch for lxc’s birthday! He’s my fave character, i just love him so much, and i didnt have a lot of time today but I had to post something! Happy birthday king! 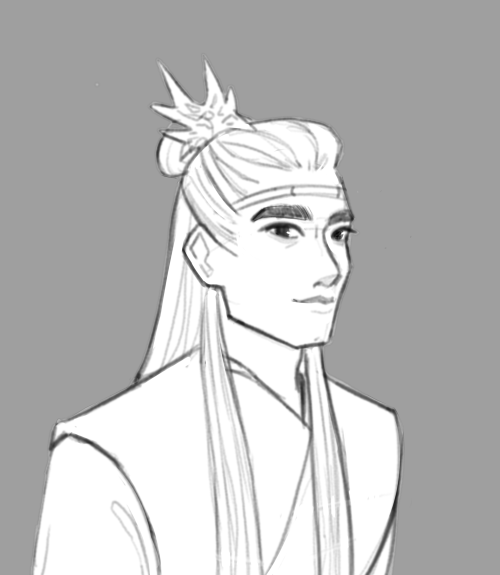 I am obsessed with them 😭🥺💓

Jin Ling: At this point of life, I don’t even know what to do

Lan Jingyi: Try dying then you’ll have to do nothing

just thinking about the inherent homoeroticism in sharing a dream of starting a clan together,

#songxiao, #the untamed, #song lan, #xiao xingchen, #cql, #Chen Qing Ling, #sl, #xxc, #xxc cql, #sl cql, #song lan/xiao xingchen, #MDZS, #mo dau zu shi, #like come on guys look at the facts theyre gay, #like just the words sharing a dream of starting a clan together, #like come ON, #do you know what a clan is???, #a fucking family thats what it is, #they want to start a family together, #no dont touch me im not ok
97 notes · See All
thebackhillText

wow wei wuxian said “am i the type to be disloyal?” one time when they were teenagers and nie huisang never forgot it huh

xue yang taking a moment to gush over wei wuxian at yi city is hilarious. like “wow the yiling patriarch, the original founder of demonic cultivation! big fan, big fan. can’t believe you frisked me that one time when we were teenagers and i didn’t even appreciate it. anyways i need your professional opinion on something”

Nie Huaisang *in a teasing manner*: Which maiden in this world managed to put a smile on Jiang WanYin’s face?

Jiang Cheng: Wei Wuxian fell down from the mountains.

Jin Ling: Jiujiu told Wei Wuxian that he can go paragliding by just using his outer robe in place of the canopy and guess what, that Dumbass believed him.

why would i die for wei wuxian, you ask???

#mdzs, #mo dau zu shi, #the untamed, #wei wuxian, #i love one cheerful sunshine boy, #i mean obviously he's not all laughs and happiness because things go to shit, #but it's still him at heart ❤
10 notes · See All
multifandomworshipperText

Jiang Cheng: There is no one in this world who loves me for who I am and acknowledges that I have a heart too.

Lan Xichen *wearing a “I love you Jiang WanYin” robe: It’s okay A-Cheng, sometimes people are too blind to recognize their one true love.

Jin Ling to his friends : So guys it’s the last time I’m asking you all for your opinions and after that I won’t take any suggestion anymore.

Zizhen: I am all okay with this.

Jingyi: I don’t know about what y'all are discussing but I want all of you to get one thing right in your mind that nobody, not even the Heavenly Emperor can surpass HanGuang Jun in his grace, beauty, righteousness, honesty, courage, swordsmanship, blah, blah, blah…..

(and a ‘blah blah’ eternity later)

Jingyi: blah, blah, blah….I can bet on my golden core that the Gods are definitely afraid of HanGuang Jun’s powers and strength and that’s why he has not ascended yet.

Jin Ling: That’s exactly why the last time I wanted to abandon Jingyi in that eight headed beast’s cave but none of you listened to me.

Just a gentle reminder that like Lan Wangji, Jiang Cheng had ALSO urged Wei Wuxian in his first life to come back to their HOME at Yunmeng and stay with him and Shijie but it never happened because Jiang Cheng fell into the trap of that ASSHOLE, BITCH, PERVERT, SUFFERING FROM MIDDLE LIFE CRISIS MF Jin Guangshan’s tricks and stood against his own brother in a war which eventually resulted in his brother’s premature death.

Please please please I want a canonical happy ending for Jiang Cheng. MXTX……*screams* ARE YOU EVEN LISTENING TO MEEEEE?????

This is the apt reaction. I mean seriously, are you guys idiot or stupid???

Lan Wangji: I really want to..

wei wuxian: don’t you know it’s important to get into fights and beat people up while you’re young?

wei wuxian: of course! haha let me tell you about the time i punched your dad in the face over a bowl of soup

Yiling Patriarch : Do you ever feel like “I’m gonna miss these good times ” when you are still living those good times?

I have officially finished reading The Grandmaster of Diabolism, Scum Villain’s Self Saving System and Heaven Official’s Blessing.

My life feels very empty at the moment and I’d like to fill this empty void left by post-book-sadness with another BL book. Does anyone have any recommendations and/or suggestions?

I really like the genres Xianxia and Wuxia, but any suggestion is welcome! I also really like books that contain smut tbh, though I thoroughly enjoyed HOB I wished it had ‘papapa’ scene.

Xiao Xingcheng: What is the real meaning of happiness?

Song Lan: Forming a new sect with my loved one and staying together happily till the last breath of my life.

A-Qing: Not to do anything in life other than playing, eating lots of candies and going to night hunts and shopping with my Papas.

Xue Yang: You guys don’t even know what true happiness is. What about cutting the son of your dead bully into slices and then gouging out his eyes all the while when he’s still alive?

novel wei wuxian: lan zhan catch me! *jumps out of a tree*