is Barioth supposed to be completely unfair?

#monster hunter world, #as far as i can tell hes unbeatable in solo
1 notes · See All
deadric-skyPhoto

And that’s the fuckin tea 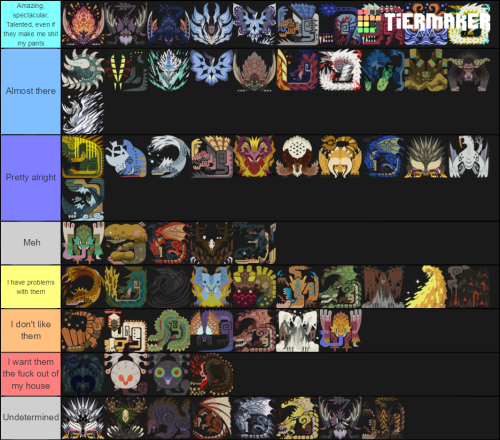 Me, frothing at the mouth with SnS in hand” GIVE ME YOUR JAW YOU LIMP ROCK BOY

#rambles, #monster hunter world, #it took so long to get those plates I wanted to screeeeeeeeeaaaammm
2 notes · See All
featherkittymoonPhoto 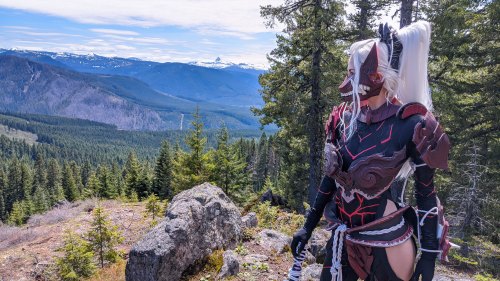 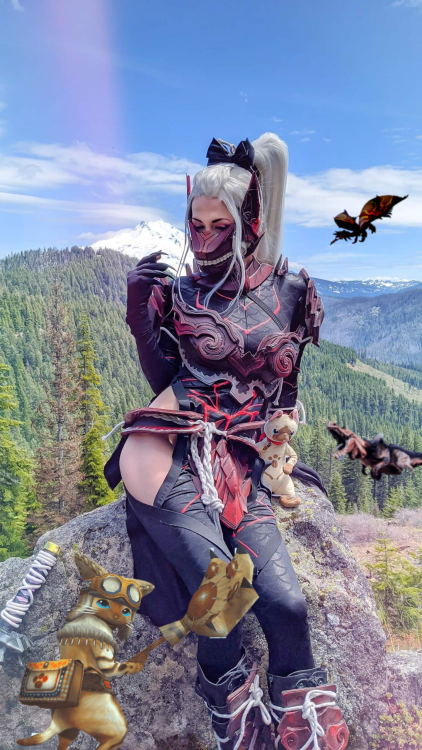 Bazel (seething and normal): my blasty babies, i can AND WILL kill for both of them. Theres a reason I have both of their complete armor sets after all, despite them not helping much. Plus his theme is fucking AMAZING!!!!! I just wish seething stayed an invader, I loved when bazel just showed up during quests.

Dodogama: Obvious reasons, plus I love his fight.

Nergi: his gear? Love. His fight? Love. His appearance? Love. By far my favorite fight base world, with how it becomes much easier the more you learn it, perfect example for a good monster.

Banbaro: as a Hammer main, he’s so much fun to fight, plus he’s the perfect amount of goofy yet still cool. Just wish he wasn’t an invader (THE WOOLY SNOW DINO SHOULDN’T BE IN A FUCKING VOLCANO FOR FUCK SAKE!!!)

Raging brachy: Damn is his fight fun! Difficult as hell (but not too insane) plus his gear is fucking AMAZING!!! I’ve grinded for his gear a shit ton, and still am not sick of him. The music for the final zone as well us amazing!

Safi: I love that we get to fight the adult version of xeno, and while color wise I prefer xeno I still love safi. It feels like they looked at normal and at xeno, saw what did and didn’t work, and using the new improvements added in iceborne made a FANTASTIC fight! (Tbh I wish he was the final boss for iceborne, feel if would have fit, but still like it.)

Jyuratodus: dumb fish, like lavisioth yet worse, overall an uncreative and uninteresting fight (plus his mud and the fact he’s almost always in deep water combined with water blight is a pain in the ass.) At least beotodus isn’t as bad.

Legiana: First of all, I hate iceblight so that alone makes me not like legi, plus the fact she’s always in the air doesn’t help. She always felt like the lamest and weakest of the 4 apex monsters in base world, and felt even more so upon iceborne.

Barioth: too fidgety and agile for it’s size, made worse by it’s annoying wind and ice blight attacks. Feels like they took the worst of narga and legi into one monster tbh.

Lavisioth: pretty much same as jyura, except stronger and even uglier. Having fought mhgu lavisioth, mhw one feels like a downgrade.

Kushala: I fucking HATE his fight. The constant flying (made worse for at and mr with flash resistence) combined with the giant annoying tornadoes capable of locking you out a zone or in a corner combined with his wind aura make him my least favorite elder dragon. The main reason he’s not lower is cause I love his looks and concept.

Rajang: Combine the speed of odogaron, strength of deviljho, thunder blight, and constant bouncing when enraged (which lasts forever if you cant cut the tail. I play hammer so…..) and make it simultaneously too small to reliably hit and have moves with huge hitboxes and you got the hell that is rajang. At least his gear is nice.

Brute: same as tigrex which I’ll talk about later, but at least his gear is awesome a d he has a better color, so he’s higher.

Behemoth: Nothing but a blight causing constant pining tornado spamming tanky piece of shit. Looks ugly, is a pain to fight (of which in base world is recommend with how good his gear is) and his pain in the ass meteors, I hate him.

Shreaking legi: Everything bad about legi dialled up to 11, constant blights, never lands, and always has a normal legi following around. Just a pain in the fucking ass to fight with no positive difference.

And last but not least, Tigrex

WORDS CAN NOT EXPRESS HOW MUCH I FUCKING HATE THIS ANNOYING ASS PIECE OF SHIT BITCH!!!!!

Huge hitboxes? Check! Extreamly quick? Check! Giant aoe attacks? A million checks! Meh gear? Check! Ugly colors? Check. Meh design? Check (at least those last 2 fixed with brute). Ever since I first fought it in mh4u I fucking hated it, and on top of that it’s a fucking invader, so I have to deal with it NON FUCKING STOP!!!!! FUCK TIGREX, MAY THIS UGLY ASS PIECE OF SHIT BASTARD BURN IN HELL FOR THE REST OF ETERNITY AAAAAAAAA-

Moral of the story? Bazel is amazing, and FUCK TIGREX!!!

Finally bit the bullet and finished Silent, Deadly and Fierce; I had to do this one twice actually because it seems the event drops only one Senu’s Feather? Whereas the first time I did it (seems like forever ago) I couldn’t make it past the Deviljho, this time, in full MR 11-12 gear, was a cinch.

Anyway, Nero’s an assassin now I guess. Also the Strollin’ Paolumu is also an Assassin. 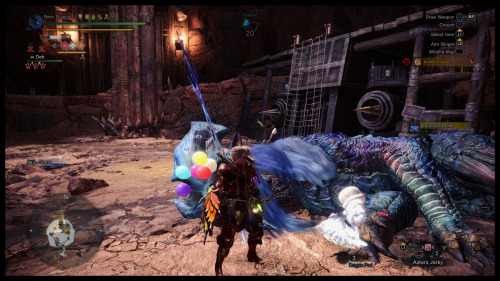 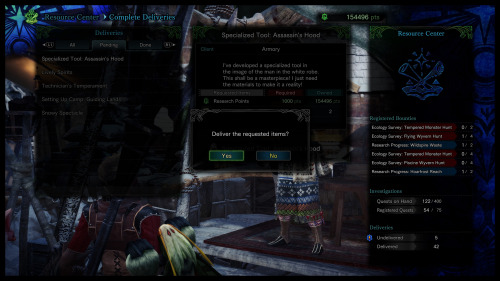 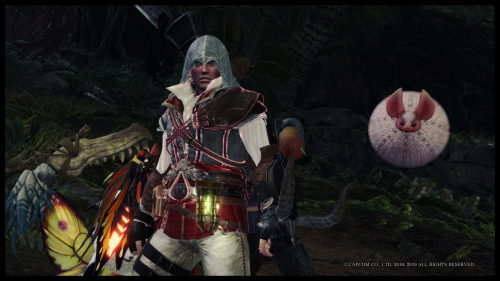 Introducing Skadi! A self-proclaimed Queen,Ruthless and skilled fighter. If u would like to ask her something be sure to head to @frostqueenvelkhana

Yes. I played MHW ICEBORN. My main is insect glaive.

Ps. some of details i have to cut off because i can’t draw it. OTL

Pss. Yes, there is inside joke in pic. 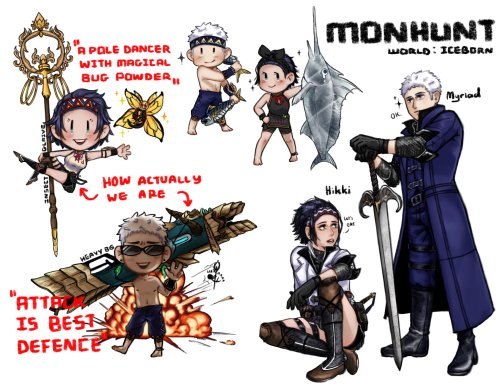 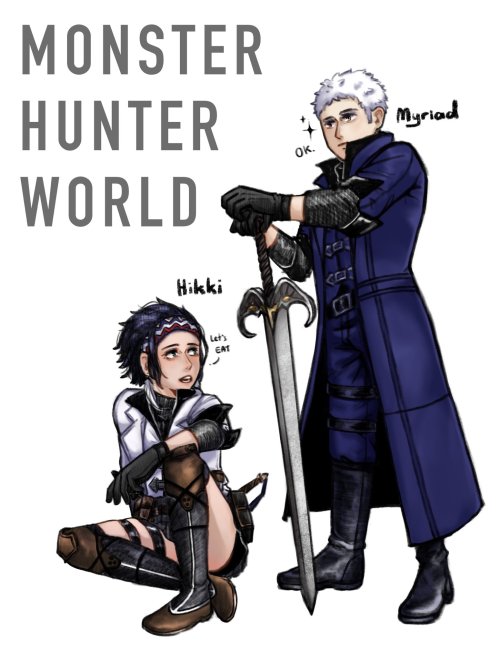 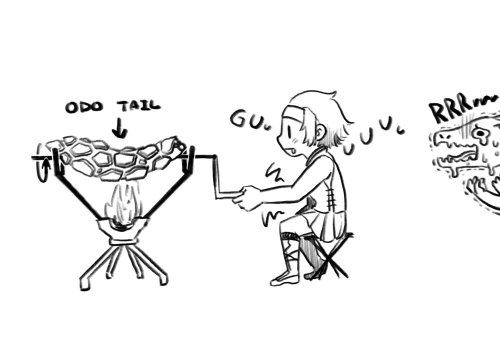 Hav a Teostra raging after losing a game of chess to Velkhana (I originally wanted to draw Lunastra but I couldn’t get the crest right..so I went with Teostra instead)

I thought I could save my teammates, but instead I saved myself

I apologize for the lack of content lately. If you can believe it, quarantine has actually left me with less free time than usual (yknow..essential business and all…). Haven’t been able to actually sit and draw for a while.

That said, this is a piece that I finished before quarantine but never ended up posting. Thank you again, @rpbattleman for your continued support! This is Tarakadi, a Temnoceran native to the Hoarfrost reach. Pretty simple concept; an ice spider. Gave it some “snow leopard-y” spots to add to its intimidating look. Capcom, pls give us more spiders…

More Info: Tarakadi can usually be found lying still inside the frigid caves of the Hoarfrost Reach. It doesn’t move much, and it only goes out to hunt once every couple of months. It will often snatch up unsuspecting prey that unfortunately stumble upon its dwelling, but it often isn’t enough to sustain its appetite. Hunger drives this spider out into the snowy outsides to ambush larger and more dangerous monsters. Outmatched as it may seem, this arachnid equipped with some unique but deadly tricks.

The Tarakadi has a frost sac located in its abdomen, which can spray a liquid that freezes almost immediately. It will spray its jaws and pedipalps with this chemical. This turns its otherwise dull weapons into ultra-sharp ice blades which it will use to cut deep into opponents (often leaving them to bleed heavily). Its a very physical fighter, and will use this technique often. If it needs a bigger weapon, it will use its other ability. It will spin a bolas web, then twirl its body around. This drags the bolas in the snow, causing it to collect enough ice to create a giant ice ball. Stand clear, as the Tarakadi will try to slam the ball onto you with all its might… 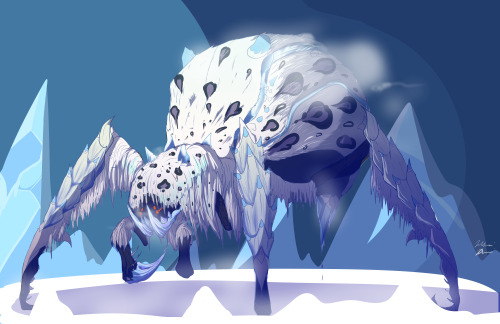 Are you a Monster Hunter World player on PS4?  Are you looking for a discord for like minded hunters?  Well, Team RAZZ might be the place for you!

We’re a smaller Monster Hunter World community containing hunters of all skill levels and backgrounds, all looking to play with new people.  Whether that be assisting with story quests or arch tempered threats, the Team RAZZ hunters are always up for a good hunt! We’re also an LGBT+ friendly community, inclusive towards those of all (hell, we even have a pronoun selection for your profile there to avoid misgendering and such).

Looking to prove your skills with your favorite weapons as we wait for Alatreon?  Check out our Weapon Mastery challenge to prove to everyone that you’re the best with your weapon with speedrunner challenges.

If you’re looking for a fun group of people to hunt with, consider joining the team! 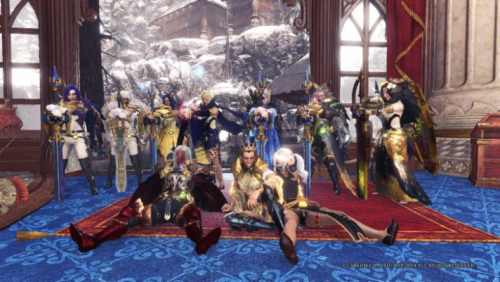 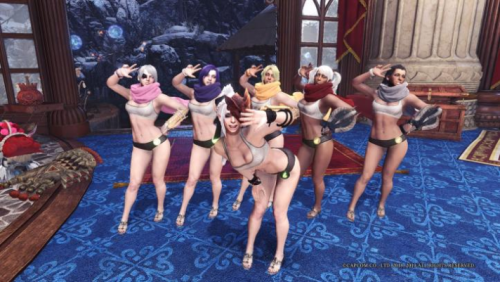 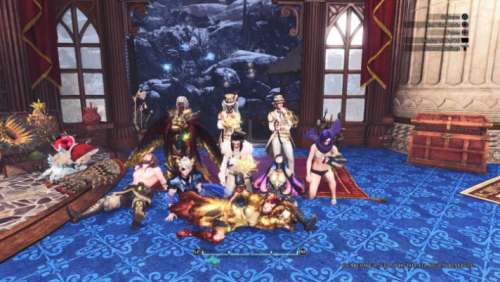 The brilliance of the Everstream herself

“In the eyes of a swift predator” pt.3

As I layed on the ground,completely unable to move due to the weight the Zinogre was applying against my own. I then heard him say with a stern voice “What are you doing?! You’re only gonna get yourself killed just by wandering!”. I replied with “I was only investigating spores and then I passed out. Now I don’t know what to do.”.

The Zinogre then asked “was that you who licked that ice wall?” I replied with “yes??” was he watching me?I hav no idea.He then give a rather loud laugh. That’s when I said “you tell me not to be wandering around yet you laughed so loud,you literally just gave away our position..”. The look on his face was absolutely priceless when I said that.

As I went my own way,I stumbled upon a camp site. at first I paid no attention to it..but once again my curiosity got the better of me. More specifically, what was in the tent..I poked my head in said tent. Only to find nothing but sleeping bags,Leftover food and weapons. As I got my head out of the tent,I saw numerous other tents.

I realized something about this camp site..this was no ordinary camp. This was a poacher camp. I heard the poachers returning to camp site and made a run for it. The last thing I heard them say before I could no longer see the camp was “we’re not alone..”. I made sure to cover my tracks so they couldn’t find me later.

The next day,I went hunting for food this time instead of scavenging. There were two options, 1. An injured Tigrex (a lot of meat,would put up a fight)

2.a Kulu ya ku (easy kill,not much meat)

I went with option 1. As I approached the Tigrex,it wasn’t aware of my presence. As the Tigrex was about to sleep that’s when I pounced. As it is common knowledge to go for the throat to kill it and I did it. Or..at least tried to..the pseudowyvern shook my mouth off it’s throat and threw me against a wall.

After I fell after being thrown against a wall,I was helpless. But I had one more trick up my sleeve. As the Tigrex was about to take a bite out of me,I got back up,got out of the way of the bite,clamped my mouth onto it’s neck,placed my paws to ensure it couldn’t get back up. I waited a few minutes..it stopped moving. Not entirely sure if it’s faking it,I snapped it’s neck. That’s when I would be hunting from then on.

In the very off chance that I should ever die, I hope I get reincarnated as the flying fluffy puff bat from Monter Honter World 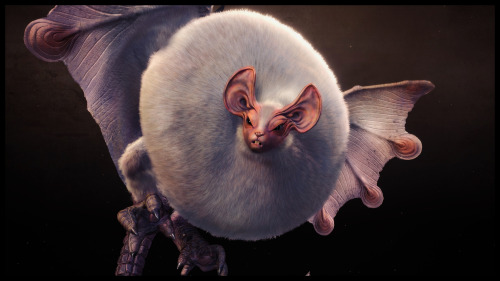 #MHW, #Monster Hunter World, #what's not to like
14 notes · See All
Next Page