Patricia loves touching her girlfriend. Janice is so easy and so sensitive. Those thighs she loves to nip and bite, the throat that she loves to litter with hickies, the cock she loves to suck and jerk for hours, the ass that she smacks and fucks, and especially those small tits she adores playing with. And the reaction she gets out of Janice is glorious, the soft whimpers, the pitiful whines, the gentle moans. They all spur Patricia on, wanting nothing more than to reduce her girlfriend to a flustered, blushing mess who begs and pleads for more and more.

his real name is not Virgil and he’s not anxiety…

Logan: With your eyes

I didn’t give Janus his scales, because he probably would have been hung without even committing a crime for looking like a reptile 😂

Sorry for all the Tangled AU’s, I just love the movie so much XD

Warnings: Netflix and chill reference (nothing actually happens) and I think that’s all! Let me know if I missed anything!

Patton Hart and Roman Prince had been dating for almost two years now, so it really shouldn’t have been too much of a surprise to Roman what Patton had asked of him.

“Y-you want to what?” He asked, slightly dumbfounded, not expecting this from the innocent boy he had fallen for.

“Yeah, Netflix and chill at my place tonight at eight, ok?” The bubbly teen replied, pecking Roman on the cheek before waving a goodbye as he made his way to his car in the after school rush, calling, “I’ll see you then!”

Roman stood stock still in the middle of the parking lot, students passing around either side of him. Maybe the little fluff ball wasn’t as innocent as Roman had thought?

He pulled out his phone and dialed up Virgil’s number. As soon a he heard the click he started, “Virgil, where are you, I need help,”

“Are you sure that’s what he said?” Virgil asked, casually lying, sprawled out on Roman’s bed.

“Yes, I’m sure Virgil, what am I gonna do?!” He said, pacing around the room

Casually propping himself up on his arm to somewhat face him, Virgil said, “Maybe, I dunno, talk to him?”

Roman stopped pacing and flopped down onto the bed next to the emo nightmare and sighed, “All I want is to make Patton happy,” He mumbled softly, running a hand through his hair, “But I-i’m not ready f-for that, b-but if that’s what P-patton wants, I-” his voice faded out. He bit down on his lip, hard.

Virgil sighed, “Roman if you’re not ready for that kind of thing, you just need to tell that to Patton, I’m sure he’d understand. You don’t have to do anything you don’t want to, ok?”

Roman nodded and sighed, wiping his eyes and sitting up, “No, no I’m ok, I’m good, this is good, I mean we’ve been together for two years now, right?” Virgil laid a hand on Roman’s shoulder and gave him a look, but Roman just stood and turned away from him, “I’m fine, V, I’m fine,” he said softly.

He took a deep breath, “Besides, it’s almost eight and I have a date, so come on Brad Pitiful, it’s time to skedaddle,” Roman made a shooing motion with his hand, his usual boisterous tone covering the fear and anxiety underneath.

Patton opened the door at promptly eight when Roman had knocked, he smiled widely at Roman, “Hey you!”

“H-hey,” Roman choked a bit, but smiled wearily back at him as he walked inside the other’s house.

“My parent’s and Logan are out right now, so they won’t be bothering us,” Patton gave a flirty wink. Though it looked completely dorky and silly on him, it was just enough to set Roman off.

Tears started to fall from his eyes and the happy expression on Patton’s face melted away as he stepped towards Roman, placing a hand on his arm, “Oh my goodness, Roman are you ok?”

Roman wiped away a tear and took in a breath, “Yeah, yeah I’m, I-i’m ok. I’m just, im s-so s-sorry, I’m j-just not r-ready for t-this kind of t-thing, I-i’m sorry,” He was speaking so quickly and breathing rapidly. Patton pulled Roman into a hug, rubbing small circles into his back.

“Shh, shh, it’s ok, it’s ok Roman, we don’t have to do anything you don’t want to,” Patton reassured softly in his ear.

Once Roman’s crying had ceased, he pulled away and smiled at Patton, “Thank you.”

Patton smiled right back and laughed, “I mean, Netflix and chill is overrated, we could always do like Hulu or something if that’s what you’re more comfortable with?”

Roman cocked his head to the side and gave Patton a confused look before saying, “Wait, Patton, what do you think Netflix and chill means?”

Roman let out a loud laugh, letting another couple tears slip from his eyes before leaning in and whispering something in Patton’s ear.

A small blush fell over Patton’s face and his eyes were wide, “Oh.” he replied, “Oh! Oh no I’m so sorry! I didn’t mean it like that! I-” he buried his face in his hands and Roman let out another small laugh.

Patton let out a, “Yes,” that was slightly muffled from his hands.

Leading Patton onto the couch, he wrapped an arm around his boyfriend, clicking on the movie.

“I like this better than any ‘Netflix and chill’,” Patton said softly.

Well, I hope you enjoyed that! I certainly had fun writing it! Just thought y'all should know this is based loosely off a conversation I had with a friend once. Let it be known that I too may need some slang vocab cards XD.

Is it really the media’s job to keep telling us we’re “not going back?” Do the so-called experts think they’re saying anything meaningful with “things will never be the same.”

We’ve heard some decent politicians and pundits point to the idea that now is the time to move forward into a better world. We have a chance to fix things that we’ve known for a long time happen to be broken. What’s the point of wanting to return to how things were when we can imagine a new world and then make it happen?

Logan - Enjoys the patterns of learning to craft and the analytical elements of building.

Virgil - Only plays on Hardcore mode because he thinks it makes him a true gamer.

Roman - The creativity of being able to build whatever he likes (but refuses to use Creative Mode because “I’m a prince, I can survive!”)

Patton - Only plays in Creative Mode, spends his time befriending villagers and gaining an army of wolves.

Remus - Will go out and kill villagers, burn down the village and then raid them.

Janus - Plays it normally, just tries to survive but spends most of his time in caves

+1 Remy - Doesn’t know what the controls are on PC, will only play on mobile

Wow, a second digital piece. I way prouder of this one though, especially because i’m doing it on a phone with no stylus-

A conversation between me (non-binary) and my girlfriend, and it made me think of sanders sides.

(Also don’t judge the quality, it took me 5min in one note) 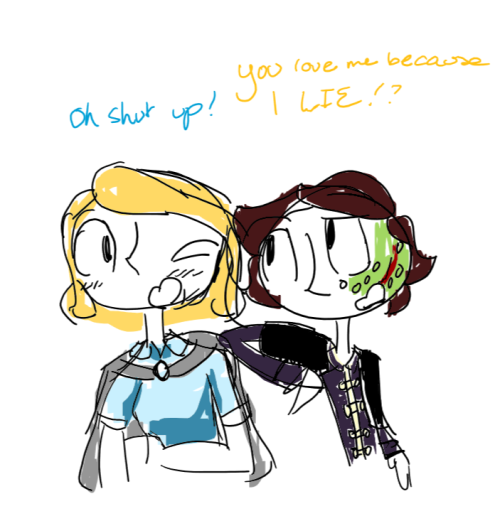 My moceit brain is struggling so bad right now

THE show that offers new facade of moral philosophy.

Missing this one GOOD show.

Welcome! Everything is fine at this PLACE.

Virgil: I’m so proud of myself, I’ve done so much today