izumi is the morgan stark of the atla universe

1. Watching a meteor shower and 63. Indigo skies just before dawn

Read it on Ao3

“Why are we up so early?” Tony can’t help but chuckle at Morgan’s whine. She’s in his arms, half-asleep and pouting heavily.

“Yeah, what she said.” Peter’s next to him, a similar state, but without the luxury of someone holding him up. Tony just smiles as he walks outside, Morgan whining quietly and Peter following like a zombie.

“Well this is an auspicious sight.” Tony chuckles at Pepper’s comment as he passes her their daughter.

“Yeah, what she said,” Peter adds in as Tony steers him off the deck and towards the grass. There’s a blanket set up near the water. He gently pushes Peter to sit down, the teenager harrumphing as the ground meets him. He then slowly lowers himself down, his bones aching for a variety of reasons (he’s old, he saved the universe, he doesn’t work out as much anymore, you name it). Peter just lets his head drop to Tony’s shoulder as soon as he’s sitting.

“Gotta wake up Underoos,” Tony says, poking the teen, as Pepper and Morgan join them. “It’ll be worth it, I promise.”

“Why are we awake?” He grumbles, sitting up a little taller. “I thought the point of me being here was to relax, not be woken up at 4 AM.”

“Well kiddo,” Tony says. “Pepper and I decided to wake both of you up because there’s something special happening tonight.” Peter raises an eyebrow at that. “In the sky. And this is the perfect time to see it.” Peter’s about to say something when a soft gasp from Morgan stops him.

“Wow.” Tony smiles, seeing his daughter’s eyes light up as the sky fills with flashes of light. He sneaks a glance at his wife and sees her watching Morgan, instead of the sky. She catches his eye and they share a smile, something that still makes Tony’s heart beat far too fast for someone with a heart condition. “Petey, look!” Morgan clambers away from Pepper and over Tony’s lap to Peter.

“I know Mo.” Tony watches them, a fond smile on his face. He can see each flash of light from the sky, reflected on both of their faces. He can see the wonderment in Morgan’s eyes and the happiness in Peter’s.

Tony watches as Peter moves to lay down, the teenager knowing how long meteor showers last. Morgan watches him before copying his movements. Lying down, her head is pressed to his side and Peter has an arm wrapped protectively around her. He finally looks away, knowing he should take a moment to look up as well.

He glances at Pepper because he feels those beautiful blue eyes that he fell in love with watching him. She offers him a sweet smile, taking his hands in hers.

“It’s beautiful, isn’t it?” She asks, her voice as delicate as the flashes of light in the sky.

“This,” Pepper says, nodding to everything around them. “Them.” Tony glances away from her to look at Peter and Morgan. They’ve both nodded off, a peaceful look on both of their faces as they sleep. He turns back to Pepper and smiles.

“It’s a beautiful life we get to live, Pep.” She nods and he moves towards her. Her hands come up to cradle his face and it feels like a dream and like the best moment of his life. The sky is turning indigo, shades of blue peeking out from the dusk, sunrise approaching. Another day he gets to live, another day he gets to enjoy the wonder of the universe.

“It’s a beautiful life we built, Tony,” She whispers before sealing their lips together with a kiss. And as the sky grows lighter, indigo melting to blue, then red, then orange, Tony can’t help but smile.

Summary:  Ages ago, I read a post on Tumblr (more than one actually) about Tony not making it back to Pepper for years, so my head started spinning and this came to be. I have mixed feelings, ‘cause it feels slightly out of character, but it took me forever to write and I didn’t want to let it go to waste. I hope you don’t care what happened with Tony up in space, because I certainly didn’t… 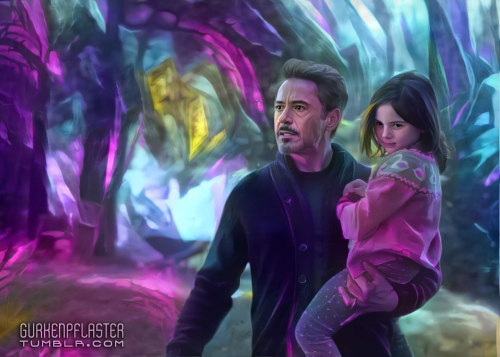 Morgan has started to call the little play tent she has outside her lair. That bodes well.

- taking care of him (fluff)

There was an idea. On July 7th I began sketching around and the result was an idea of a crazy Spidey adventure in space with the Infinity Stones back in play. Fast forward almost a month and I decided I should digitalize it so I started on July 29th. I was a lot of work and it took FOREVER to finish every character individually in order to get creative with the positions on the canvas 😩😪.

But just yesterday I finished it, and I dare to say I looks pretty cool 🤩.

Then I realized it could fit in some kind of Infinity Crusade storyline in case the Stones are restored. Well, hope you guys like it, I put a lot of work into these. 😄

Art style belongs to me ©

Parkner Week Day Six: “We’ve all made a ‘Happy Birthday’ sign” / coming of age / getting older

yes this is entirely based off the Frozen 2 song, Lost in the Woods

Being a year apart in age had never been a problem for them. It’s not like it was a big thing to be a whole twelve month difference in age. Peter’s the younger of the two, when they started dating he was fifteen and Harley was sixteen. Nobody at school blinked an eye at a sophomore and a junior dating.

It wasn’t like it was a big deal, the tiny age difference didn’t change anything.

Until Harley’s eighteenth birthday comes around.

It’s late August and they’ve been ignoring talking about the big change coming up. Harley’s graduated. Tony’s helping him move to Boston. Harley’s going to be gone in three weeks.

They’ve never really spent a lot of time apart. They’ve gone a week or two whenever Harley flies down to Tennessee to his family, they went all of July apart the first year they were together when Harley was home and Peter went to a nerdy summer camp with Ned. They don’t spend every waking moment together, but they’re used to seeing each other all the time, always being close enough to see if they want to.

With Harley living at the tower, they had sleepovers every weekend, they would walk to school together and Harley always walked Peter home, they spent lunches together, they had Academic Decathlon together. They spent a lot of time together.

And now they’d have to spend months apart.

Sure, Harley could drive. Tony had gifted him a car for his sixteenth birthday, and Harley would only be a few hours drive away from New York. He could come home every weekend if he wanted to.

But everything would be different.

Peter wasn’t sure if he was prepared for everything to change.

Summary: “Yeah.” Tony brushes his fingers against Pepper’s cold, feminine cheek. “I love you so much, Pepper,” He whispers with endless love in his heart.

“I love you too, Tony,” Pepper returns, leaning in to give him a warm kiss before they begin to drift off as they inevitably would.

The father pecks his daughter on the temple before he finally relaxes his whole body. “You, too, my baby girl…You and your mom more than anything.”

It is at moments like these that Tony Stark truly knows how to breathe.

OR: Tony Stark swears he doesn’t deserve his amazing life, but he has it, and this is what it is like

Tony: Harley, why has Morgan just told me that lying is a necessary evil

Harley: Because I told her it was, which it is.

We’ve actually gotten several requests for this fic and have finally found it now! Hope you enjoy!

Tony had adjusted to parenthood quickly when Morgan came along, and was always conscious of making sure Peter isn’t left out … Almost always.
When Peter gets hurt while taking care of Morgan, Tony obsess over his daughter and takes his anger out on Peter, without even checking to see if he was okay. Steve finds Peter later that night in serious pain and in need of immediate medical attention.

Or, Peter gets hurt while taking care of Morgan and Tony basically ignores him.

Tony Stark and Steve Rogers take their four children on a trip to the beach. Familial chaos ensues, especially when one of them is hiding a secret they’re sure will get them in trouble.

But, of course, family always has your back.

Ta-da! My very first commissioned piece! It’s kind of a new style for me. I hope you enjoy!

tony: yeah tell me something i don’t know

tony: well i didn’t know that

like can you imagine how cute that would be

i would die on the spot