Just a mum, a dad and their troublesome toddler who refuses to stand still and take a nice photo. 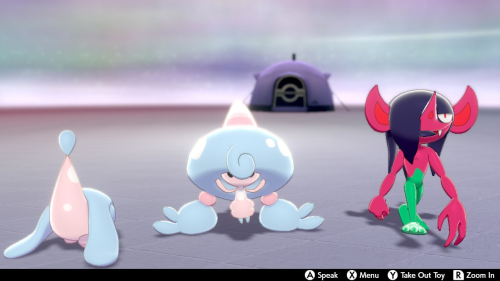 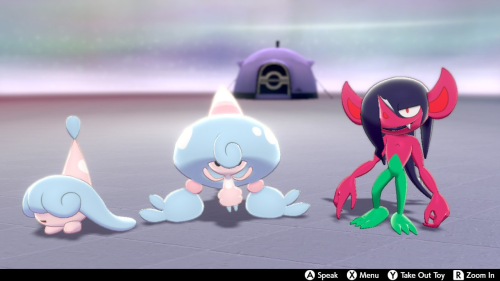 #This is my neurotic Morgrem who's afraid of almost all my other mons, #He's a father now, #morgrem, #hattrem, #hattena, #Who let the personification of a panic attack have a daughter?, #Well...I did, #pokemon, #pokemon swsh, #pokemon shield, #pokemon sword and shield, #Little Birthday there is having the time of her life at least, #She also threw a tantrum when her dad beat her in a race lol, #family portrait, #The parents are called Hat Thing and Pinocchio
2 notes · See All
mischief-morgremAnswer

Hey guys! I’m writing another fanfiction! This time about a Grimmsnarl… well, I’ll let you read the summary and decide if it’s something that floats your boat (as it does mine please don’t judge ahaha)

You’re woken up one day to an Impidimp stealing your precious berries in the middle of the night… and your life is never the same again.

A journey of how a certain impish pokemon has helped you heal your past bad times, your current bad times, and any bad times to come… if there were any with him around.

Impidimp Evolution Line x Reader… Eventually! There’ll be some mature themes late fic… and a bit of smut. Read at your own risk!

I met him in the flower-field. 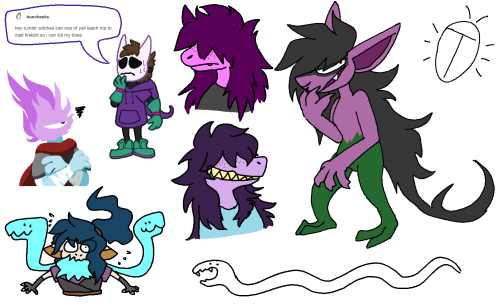 #you can see exactly when i got tired for each one also no kin tags thanksa you, #dead cells, #the beheaded, #underhero, #masked kid, #yokai watch, #venoct, #orochi, #deltarune, #susie, #pokemon, #morgrem, #gimoh, #sfw, #wow so many tags
2 notes · See All
scribblelizardsPhoto

I could learn to appreciate the stars….. 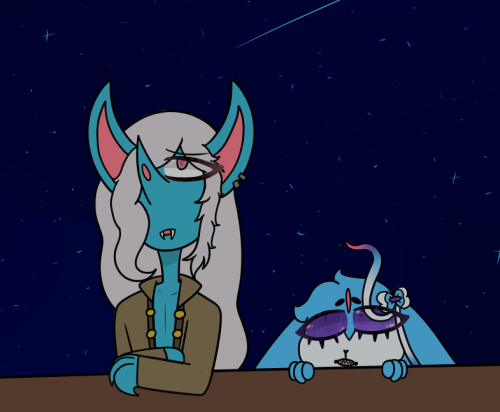 I think he’ll come when he’s lost and weak in the woods.

CW for violence, Hell, and spiders

I had a pretty fucked up dream last night. So, my Morgrem in Pokémon Shield (named Pikestaff) had to go alone to Hell and fight some giant disgusting eel Pokémon for whatever reason. But he didn’t win, and he came back wrong. Very wrong. I didn’t find him until I wound up in this office building in the corridor, and I saw his body on the floor, but it was…elongated. So elongated that I had to go round a corner to see where it ended, but his body just kept going, all curvy and snakelike, and he’d used his claws to scratch taunting messages into the walls like “will you find me?” and “you might not like what you see?” so I was sufficiently freaked out by this point, but the worst part was when I saw that Pikestaff had skinned my other Pokémon and left their skins hanging from the ceiling. I was scared out of my wits and beyond sickened, but I felt compelled to try and find Pikestaff. I had to see what had happened to him. I turned a few more corners and walked up a few more staircases—his body was still going—until Pikestaff’s body started getting angular and pointy instead of curvy, then I went round one last corner, and I finally saw Pikestaff’s head. So, imagine a Morgrem, but its head has somehow been turned into a giant spider, with multiple eyes and giant fangs and its hair ending in spider’s legs. I noped straight out of the building.

Well, at least I now have a decent idea for a creepypasta if I ever need it.

#nightmares, #Pokémon, #pokémon sword and shield, #morgrem, #this is so fucked
1 notes · See All
noblejanobii-artPhoto

Bit of a Design exercise with the cast of @ask-teamlightbringers

There was a prompt on a forum that asked people to draw their characters as Pokémon, but since my characters are already Pokémon, I drew them as different Pokémon and Neopets. 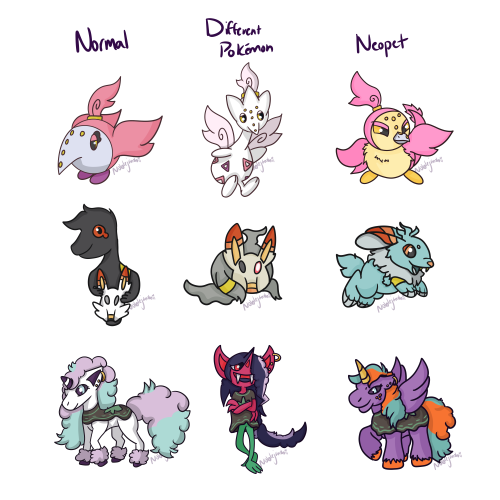 anonymous said: How do your morgrem take care of thier hair?

❝ it varies between INDIVIDUALS. in the wild, morgrem are accustomed to looking after themselves. ❞ bede hummed thoughtfully. ❝ although, i have heard morgrem may tend to each other’s hair as a BONDING activity. i suppose it isn’t too dissimilar to pokemon such as meowth or purrloin grooming their companions. ❞ in a way, the fairy types did bear some resemblance to felines —— PERSONALITY wise more than anything else.      ( mischievous. chaotic. occasionally disobedient. food motivated. )

❝ in terms of morgrem at the stadium, some of them react very NEGATIVELY to having their hair touched. others couldn’t be more different. ❞

While searching for a good stat Phantump to breed, this bad boy decided to appear- full odds!!