I think she planned on raising her in the cottage, but made the split-second decision to raise her elsewhere, somewhere where the guards didn’t know about.

… You go right ahead and headcanon that. XD All headcanons are valid.

No, what’s implied is that the Sundrop becomes vulnerable to be taken, not that it’s supposed to be or will be or whatever. But no, I don’t think she would have done that because Gothel is not shown to be power hungry in any way. Taking the Sundrop means taking its power for your own. Besides, for all we know, she thought getting power like that would turn her into a green ghost thing like Sugracha or Tromus, or worse, a monster like Zhan Tiri. That doesn’t vibe with her whole “beautiful” goal.

But then, what do I know? I thought having a kid went against her personality, too. 9_9

Also, I got the impression that the only reason the Sundrop became vulnerable to be taken during the eclipse was because the Moonstone was near. When they’re separated, they don’t call to each other as strongly, so without the Moonstone right there to overshadow the Sundrop, things would have remained as normal.

I’m not sure what you’re getting at. A total solar eclipse can last for several hours and totality can range from a few seconds to 7.5 minutes. She’d make sure she was youthened before the eclipse hit and that would be that.

Something I thought of.

When it was discovered that Diana was bound to the Eternal Library, Diana felt blows of immediate emotional abadonment from Zhan Tiri. Zhan Tiri’s anger towards the fact that she couldn’t fulfill her initial purpose left Diana feeling like a failure though she didn’t understand initially WHY she felt like that. After that Zhan Tiri was outright cold to her and Sugracha and Tromus slowly started pulling away from her until they didn’t show up to the Library having also followed Zhan Tiri. Gothel went with them but Diana couldn’t care less about her but the abadonment from the others really hurt and Demanitus finally not showing up later on was a real nail in the coffin for her, setting her back emotionally and closing herself off as well as becoming distrustful of people.

Day 39 - One question about the show you’d like to have answered?

So many. The first one that comes to mind is how did Wish Hook manage to have a child with someone who wasn’t from the Wish Realm, in a different realm before the Wish Realm was created?

I’m sorry, I literally got nothing.

Staring at the Face of Evil

Can we even imagine what was going through Eugene’s mind as that evil, evil woman who had just stabbed him minutes earlier, was now chaining him to the newel post with the same fetters she used to bind Rapunzel, a smug note in her voice? The sheer horror of seeing her face-to-face for the first, and likely last time, just inches away from him? After hearing how Rapunzel offered to heal him in exchange for her freedom?

Spare Eugene a thought. He was already in excruciating pain, bleeding out fast, and was tormented by the thought of Rapunzel an eternal slave to her so-called mother, so he can live. My own heart bled for him at this particular instant. 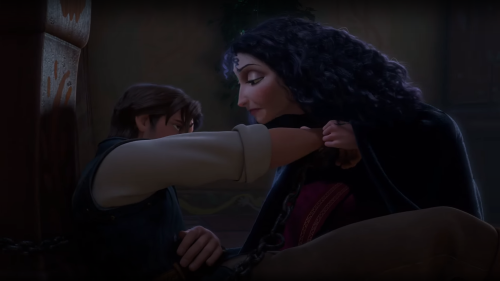 lol Not too nice! Very polite! Diplomatic, even!

But yeah, I’d go with “stupid” myself. XD

He gave me my longest running gag to date: He’s Cassandra’s dad. ^3~

I have a few headcanons. Now, they’re just headcanons, but they’re as good as any other out there.

Gothel didn’t know her name. She re-named her Rapunzel after the magic flower (which is based on a rampion flower, and which is why Frederic and Arianna named her that), since she was its human embodiment.

Gothel didn’t remember her birthday. She doesn’t care about birthdays. Do you think she keeps track of her own birthday? She doesn’t want to know exactly how old she is! She told Rapunzel her birthday was the first significant date she could think of: the day the flower was stolen from her. It just happened to be right.

Frederic’s style is Tudor fashion, which lasted until the 1600s. Gothel is straight up Medieval fashion. The Medieval era was 5th century to 15th century. Plus, she was in Corona before Corona was Corona. Watch the prologue to Tangled again. She found the flower before the kingdom was founded.

I’ve seen the video, but I’ve never seen it live.

I 100% disagree with you about Max. That is a masterpiece of puppetry. You’re not supposed to look at the guy, just the horse.

I like all the little reprises they added. I like “Wanted Man” because Alan Menken and Glenn Slater (who did the new songs for the cruise) always think of Flynn as a kind of rock star. The most out of place thing about it is that, as Glenn Slater put it, the songs in musicals are for when the emotion gets too big to come out as anything but a song, and Eugene’s always been really good at keeping his feelings close to his vest. (That’s why his ballad wasn’t until the end of S2, and before then, his songs were always piggybacking on someone else’s joy or, in the case of “Buddy” when he was so high off his gourd that his inhibitions were shut off.) “Wanted Man” does have some of my favorite lyrics in a Tangled song about Eugene ever, thought:

You’ve got to love the way his trousers stick, plus–
Hold that thought, girls. Gotta split!

@kelseyfitzherbert saw it live, and the Eugene she saw she said was really good (not the same guy as the one in the video).

I like Rapunzel’s voice, but not for Rapunzel. She’s not really a belter.

I liked how there were even more bits of Gothel’s abuse laced in (”You can have as much as you want, as long as it isn’t too much.”) but I disliked that Rapunzel called him Flynn until he was dying in the tower. Like… WTF? That sort of beats the purpose of the name confessions.

I LOVE THAT THEY KISS IN THE BOAT.

The 12th installment in the NYT best-selling series asks: What if Rapunzel’s mother drank a potion from the wrong flower?

Desperate to save the queen and her unborn child, the Corona guards seek the all-healing sundrop flower, but mistakenly acquire the glowing moondrop flower instead. It does cure the queen, and she delivers a healthy baby girl with hair as silver and gray as the moon. But soon it becomes clear that the princess’s hair is dangerous. And for her safety, and the safety of the kingdom, Rapunzel is locked in a tower and put under the care of powerful goodwife, Mother Gothel.

For eighteen years, Rapunzel stays locked away, knowing she must protect others from her intense power. But when she is drawn out of the only home she’s ever known, she gets caught up in a quest across the kingdom with two thieves-a young woman named Gina who also happened to be raised by a goodwife, and Flynn, a rogue on the run. And Rapunzel learns that there may be more to her story, and her magical tresses, than she ever knew.