+ @symbioteburnout​ asked:  “You’re more comfortable than the couch.” (to Mayday)

+ “ Comfy enough that I didn’t even get enough time to get my suit off. “ Mayday teased, playfully nudging her girlfriend before snuggling in even further beneath the small throw blanket. An uneventful night wasn’t one that she would complain about, and certainly not if this was the reward she received on her return. Not to mention that Annie was being watched by Jessica, eliminating any sugar-rush induced perils.

( hit the heart for a starter from any of the Spider-kids. )

+ “ And to think all I’ve done is rub your back so far. “ May chuckled, smiling as she continued to let her hands move in random patterns along her girlfriend’s back, lightly squeezing and massaging every inch of skin they came into contact with. Teasingly, she let her one hand wander down to the other’s thigh, giving it a light squeeze before pressing a small kiss to the small of Andi’s back.

“ Hope this is making you feel better. I don’t really consider myself an expert at this… “

+ @symbioteburnout​ asked:  “Well, I got her attention. What the hell was step two?” (To Mayday, while babysitting Annie on a sugar-rush!)

+ “ Honestly, it’s just getting her to the point where she tuckers herself out. As long as she doesn’t find another thing to replenish how much sugar she’s got ? We’re looking at twenty minutes tops before she’s passed out on the floor taking a nap. “ Mayday answered, watching as her younger sister rushed around the room, seemingly holding a conversation all her own. “ What the heck did you give her ? “

+ “ I’m pretty sure I just figured out what my evening plans are. “ A bright, almost characteristic smile blossomed onto Mayday’s lips. “ Once I get into my pjs, you better be ready for a blanket burrito. “

+ ( With May, she definitely dotes on Andi, trying to make her feel as comfortable as one can be when they’re sick. She even risks getting sick herself when she offers her girlfriend cuddles. When it’s the other way around, May tries not to be needy, but sometimes she can’t help herself. She can be pretty bratty when she’s sick when she wants to be. )

+ @symbioteburnout​ asked:  “Hey, so… sorry for breaking you the other day.” Andi scratched her head, looking at Mayday, remembering the chocolate incident from a couple days ago. “You still had fun, right?”

+ “ You’re kidding, right ? “ Mayday answered, cheeks faintly hinted with red at the recent memory. Giving her girlfriend a playful waggle of her brows, she nodded. “ Pretty sure it was the best way I’ve spent Valentines’ weekend. Ever. “ 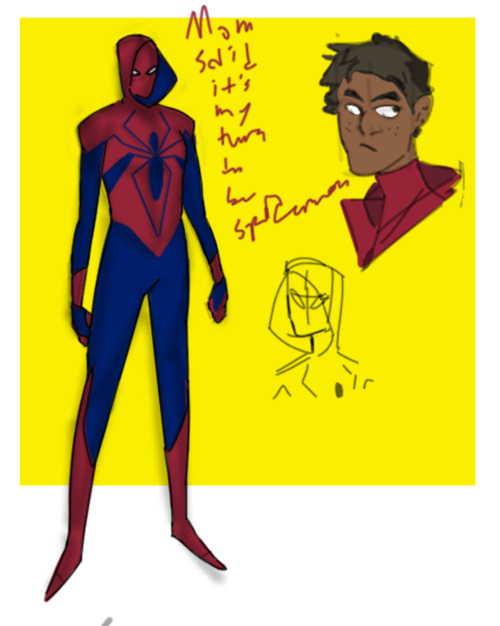 Spidergirl Confession: I really loved fashion disaster May. I kinda wish we’d had her and then April knowing just what to wear in the comics

#spidergir, #mc2 universe, #mayday parker, #may parker, #april parker, #i need to get back to my fanfic, #in which i pretty much did that, #or at least april had her own type of fashion and may was just 'whatever', #mary jane just silently crying over her daughter wearing overalls and ripped sneakers
5 notes · See All
electronicdelusionstarlightText

1) Felicia and Felicity canonically lived in France before moving back to the states, so here’s a pretext of sorts: Mayday’s family is invited by Felicity’s to a (awkward) vacation to Paris, maybe also as reason to scout out the possibility to open a Ladybug Shoppe for Mary Jane.

2) Ladybug and Chat Noir, while cultural icons in France, are almost unknown abroad, so Peter doesn’t know how young they are or the scope of the situation until a giant kaiju clown monster starts trashing around the streets and sees the wrong teen superhero going after it, followed shortly behind by his daughter.

3) This is a somehow older and experienced Spider-Girl meeting “just 6 months on the job 15 years olds Ladybug and Chat Noir” that reminds Mayday just how young she used to be so now here she is having to mentor them “against her will.”

4) Gratuitous fight scene between Ladybug and Chat Noir vs Spider-Girl over a misunderstanding because this is Spider-Girl so of course this happens.

5) Alya is starry eyed over the possibility of a american hero showing up of course and ready to release a interview untill she finds out is a “small fry” like Spider-Girl rather than someone cooler like American Dream or Franklin Richards. At least it’s not Mainframe.

7) Both Peter and Mayday are canonically awful detectives but Mary Jane isn’t and Felicia literally makes a living over it so Mary Jane just needs to meet Gabriel, once, one fashion Mogul to another during some fancy meeting, to know that something is up because she has enough experience with that kind of shit in her life to understand when someone is a supervillain at this point, so we have that line of inquiry.

8) Chat Noir is a Black Cat fan but not for the reason you might think of, he just really likes the cat motif and also the allegory for freedom she rapresents.

9) I’m stretching it a bit here but Felicia and Adrien’s mother and aunt used to be friends too back in the days so we also have that angle in conjunction with Mary Jane’s own suspicions. Are they exes? Eh, maybe, not like they’d get together if Emile wakes up Felicia is happily dating another woman at the moment after all.

10) Mayday (Civilian) and Felicity also get a miraculous. Again, Adrien meets Felicia due to his mother’s connection to her, so he meets her Family, which means Felicity, who then lets him meet Mayday’s family. One trip to his favorite bakery with the newcomers seals the deal.

11) I usually joke about Adrien embodeing all 3 of Peter’s most famous love interests in both aesthetic, familial history, personality and cat themed persona so we have a dash of that.

12) Marinette discovers she’s also a mutant and gets outed as one during gym class and the Uncanny X-People try to recruit her into it because of course they do. Adrien and her friends and family are very supportive of her but anti mutant sentiment is kinda bad even in france and all of this only dredges up bad memories for Mayday about that one time her own friend (another asian girl too) got outed as a Mutant and had hate crimes committed upon so here we have Marinette having to juggle her dual identity as both a mutant civilian and a magically powered superheroine.

Can’t think of much else.

AU where Spider-Ham’s and Mary Crane Watsow’s daughter is the Spider-Road Runner, the fastest superheroine alive.

Some Maydays and “uncle” Johnny Storm. Was def fun trying to nail that “I’m in my 50s but I’m still great” look down while looking up refs from various MC2 comics. 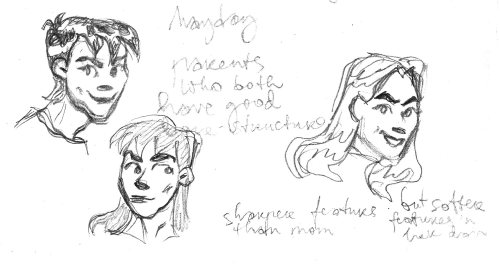 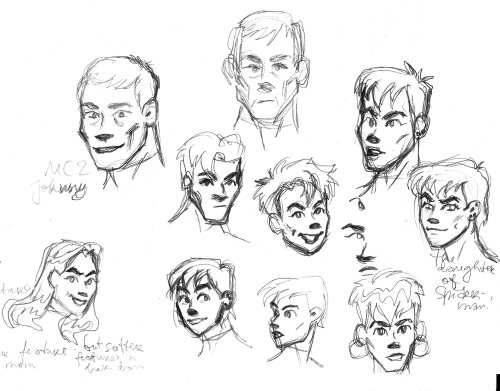 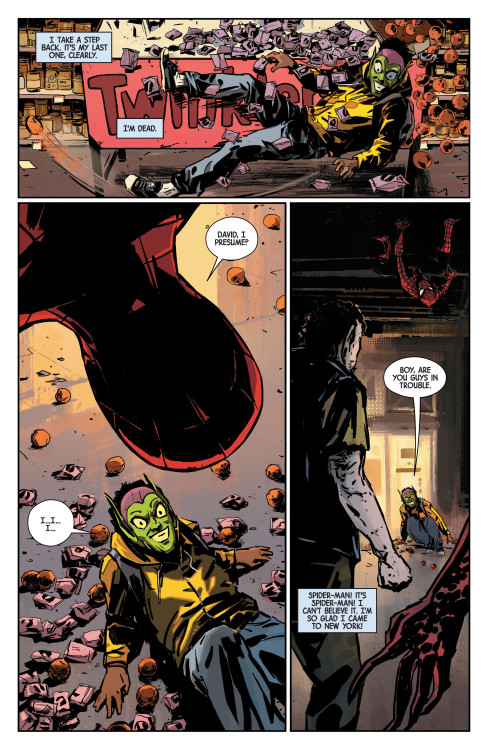 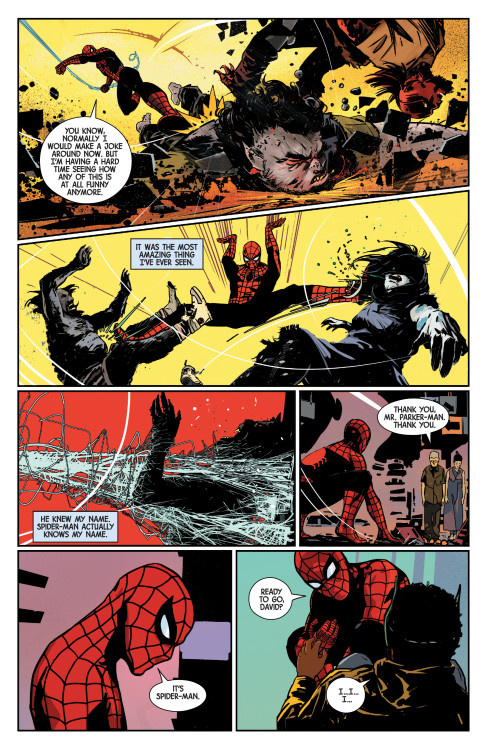 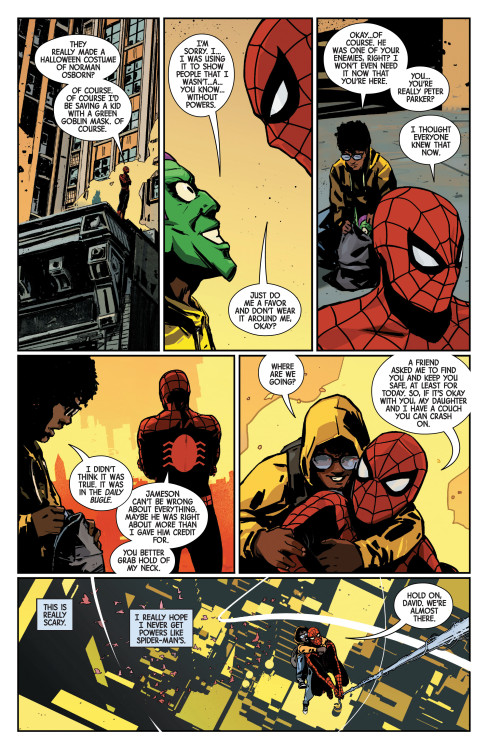 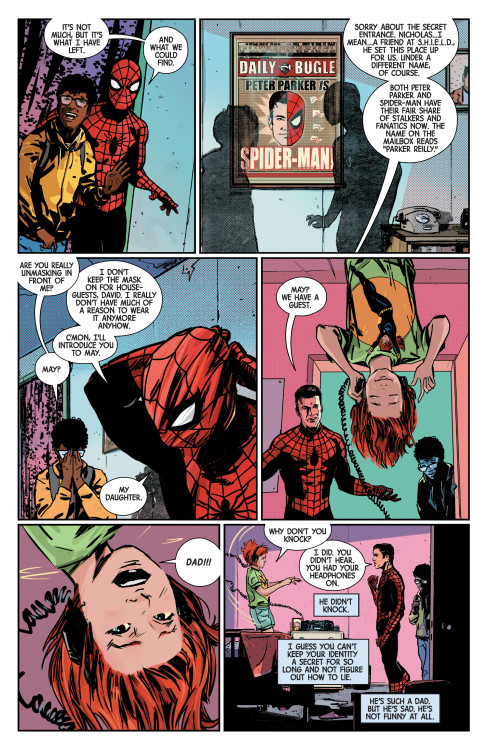 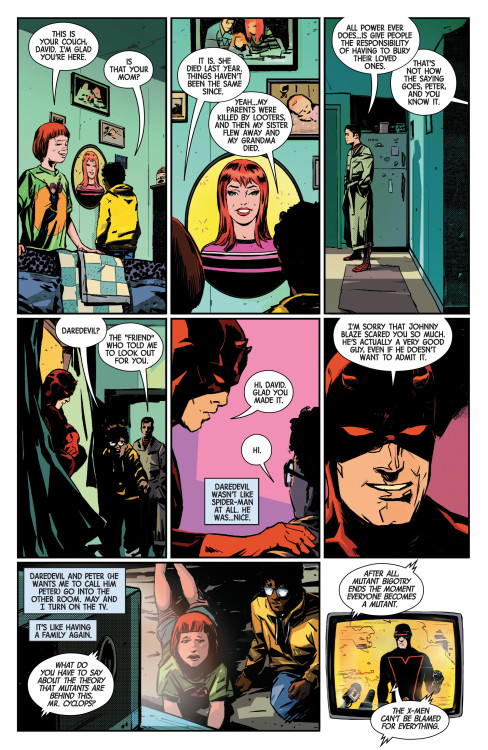 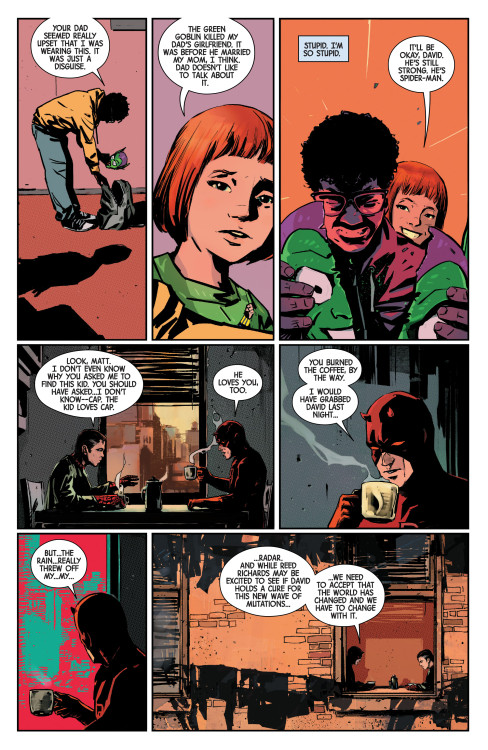 Ever since it had returned to her, she hadn’t asked it to leave.

It had taken getting used to, this silent voice in the back of her head, craving from her something she’d never thought to offer: motherhood.

It let Tanis work with it. In return, she fed it. She cared for it.

She lived with it.