@bubbles-3000x​ submitted: Our bug hotel has a Yellowjacket nest! There is one getting a sip of water.. our mosquito population has rly been kept at bay thanks to them! Also some rly nice photos I took of a garden millipede (we have a billion) and an earwig! And my most proud: an ambush bug I spotted on a walk! I’m guessing it was about 5mm long but they are rly interesting! We also have sweatbees (with green head and thorax and striped abdomen!) but they are so tiny and fast I can’t photograph them

Very nice of the wasps to keep those pesky mosquitoes in check! Love the millipede and earwig and ambush bugs are always a super fun find! They are smaller than most people would expect, I think. Thanks for sharing all these pals! Love them..

And a Leopard Slug!

Dang, North Carolina seems to be packed with awesome pals. Looks like an American giant millipede (a fav!!), prooobably a yellow-and-black flat millipede, Apheloria tigana? There are a few species that have similar coloring, but that’s the most common. And the leopard slug!!! What a lovely large friend with an excellent outfit and A+ eye stalks. Thanks for sharing such nice long friends!

@fifthgrades​ submitted: not a bug I needed to id but I thought I’d share this photo of my Sonoran Desert millipede who seems to have chewed a hole through his cucumber and fallen asleep immediately after . it was very cute.

THIS IS MY FAVORITE PICTURE. Millipedes are so good I can’t even express it in words. My sweet ivory (RIP) used to go ham on veggie slices and then fall asleep directly on top of them. What a life. Oh to be a long tube, sleeping within a cucumber…the dream…

I am enjoying it!!! So many leggies…nice. And those stripes!!! Extremely fashionable. Thank you for sharing :) 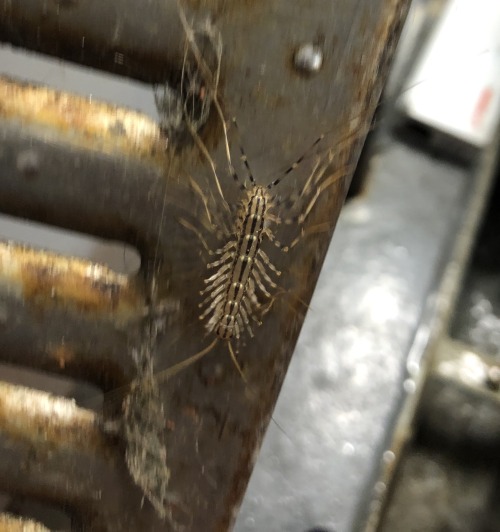 @dbrowan​ submitted:  I know I’ve sent a few of these pictures before, but these are some of the nice bug friends (+ some tiny shrimps) I met at the insectarium🖤 I’m not sure what the 4th and 5th bugs are though.

Also the butterfly on me in the last picture didn’t leave my neck for over 10 minutes. We had to gently nudge it off before we could leave the butterfly room 😅

You made a butterfly friend!! You must have good vibes. Looooooove the picture with all the bees. And the shrimp!!! I’ve been thinking about getting some shrimp just like those. That millipede reminds me of my poor Ivy that just passed away. RIP, Ivy. Anyhoo I’ll assume you mean the 3rd and 4th photos since the 5th one is a tarantula. They’re phasmids, but I’m not sure on the species without comparing to a bunch of photos. If anyone recognizes them, feel free to comment. :) Thanks for sharing so many pals!

@wellthatsarelief​ submitted: i went to france and found lots of lovely bugs :D i’m pretty sure there’s a wasp spider, violet carpenter bee and house centipede but have no idea what the beetles are

Some French bugs! Excellent. The first spider friend is definitely a wasp spider, yes. The bee does indeed look like a violet carpenter bee, and that is of course a house centipede, so good job! The other two are not beetles, though, but true bugs. The fancy red and black striped lad is a European striped shield bug, and pretty sure the last dude is a bordered shield bug. Good bug finds! Thank you for sharing :)

@bakageta submitted: I saw this friend before I left for work in central SC!

Not to be dramatic but I love this millipede more than I love a good number of my own family members. This absolutely stunning pal looks like a red-sided flat millipede, Sigmoria latior! They are also sometimes black and yellow. :)

This myriapod can be found in eastern North America, though you may not see them that often. They like to bury underground or hide in the leaf litter that they eat. Each time a millipede molts, they add another segment to their body! Although their name means “thousand-legger” they only have around 300-400 legs. Millipedes do not pose any threats to humans or their pets, so dont be afraid!

Millipedes are commonly mistaken for their close relative, centipedes. There are a few key differences between centipedes and millipedes:

2. Centipedes are carnivores, millipedes are detritivores

4. Centipedes move very quickly, millipedes move slowly and are very docile. Just be careful if you do handle one, some species (like the American giant) release a chemical that can burn your skin if they feel threatened!

Check out this centipede

#Narceus americanus, #american giant millipede, #millipede, #myriapods, #bugblr, #bugcore, #i have no idea why i gave him that much lol
247 notes · See All
yutyrannussText

Anyone here got experience keeping centipedes?

after: new! exciting! you can actually see the substrate! easy to find millipedes on the surface! plenty of climbs and hides!

this is my first experience owning millipedes/invertebrates (i have bang the flat-backed millipede right now and im getting two florida ivories from @millipedefarmer​ next week or so), so im mostly learning as i go since theres not a lot of information on millipede care. im aware that the substrate is pretty lacking right now (i ordered it online and it seems i probably should have ordered two bags instead of one), but itll be enough for now until i need to change/clean/rearrange the terrarium again, since bang is tiny and the ivories are still young. the tank is a 12x12x18 zilla vertical terrarium with a high-set front opening door to allow for deep substrate. i have the tank set up on a tall dresser, so i needed something with a front door for easy access without having to use a stool every time i want to mess with the terrarium. i plan on going out and looking for a sturdy stick or two to add to the tank for more climbing opportunities since ivories like to climb, and i added live moss to the inside of the fake climb to have a high humidity place for them chill if theyd like. overall im pretty pleased with how it turned out, but i definitely plan on making some more changes in the future and upgrading them to a larger terrarium when i have the funds! 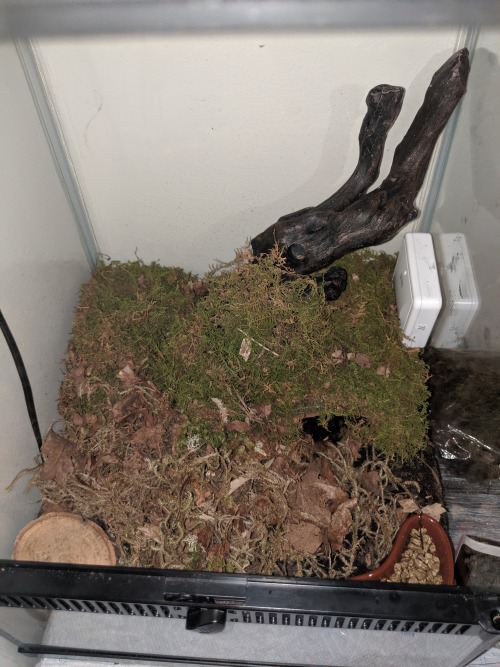 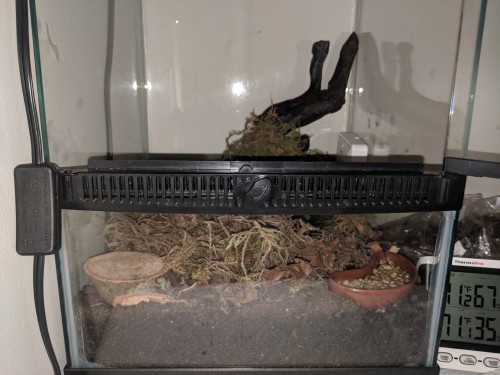 elytra are the wing covers of beetles, modified from their forewings

the size of the elytra (if we assume they are taken from beetles), bees, and spiders (compared to the player) imply that the minecraft world has a higher atmospheric oxygen percentage, allowing for larger arthropod growth

so obviously the next needed step is minecraft arthropleura

Season 3 of Bug Art is over. I’ve been on a roll with Bug Art lately, but it’s partially been because I’ve been running through a list of critters to draw, starting with about 15, and then occasionally adding as I worked my way through it. I wouldn’t be lying that I’m stopping because I’m a bit sick of bugs, but it’s also because I have finished my list.

Here’s a few stats for this season of Bug Art. There were 32 Instagram posts, and at the start I set out to colour most of them. Only 2 weren’t. Over those 32 posts, I drew 38 species. 28 were insects, notably 11 Butterflies, 5 Moths, and 5 Beetles. There were 2 crustaceans, 4 chelicerates, 1 basal arthropod and 3 non-arthropods.

I have pushed the limits on what I can draw and still call it Bug Art. When I began, it was insects and arachnids, but crustaceans are still arthropods right? And if bugs are just creepy crawlies, then I can do snails right? The furthest i pushed that bracket this season was tardigrades and anomalocarids, which are not even arthropods, but fall just outside that bracket. I also did a sea snail, which is pushing the limit too, even if snails are creepy crawlies, are marine relatives still in that definition?

So with the conclusion of Season 3, I want to declare an end of my Bug-exclusive scientific drawings. Given that I wanted to stop drawing bugs before but kept coming back, I can say with certainty that I’ll draw bugs again. But I want to draw other types of life too. Watch this space.

#hmmmm, #tumblr, #i'm sorry but this made me laugh, #millipedes, #myriapods
23 notes · See All
jackthevultureText

I have found this impossibly tiny, extremely injured millipede. Despite having the last ¼ of its body hanging on by a thread, it seems to be walking around and doing okayish.  I dont know if it will survive but i figure the enclosure i have my other local pedes in will probably give it a better chance than being out there with the ants. Does anyone know, can millipedes survive injuries like this?

As a human being living in Barbados I have no idea difference between centipedes and millipedes because I rarely see them in my home or in my parish.

I had gone to a party in the proclaimed “Land of the Centipedes.” I had gone to the door and I saw a millipede. Me frightened and slow asf shouted louddddddd “Look! A centipede with many legs.”

I’ve never felt so stupid in my life.THE FACT THAT I HAD LEARNT THE DIFFERENCE WEEK BEFORE IN BIOLOGY.Btw is was a millipede I had seen

Welcome to Polyxenus, the 100th post of De Rebus Naturae

is a genus of bristly and very small millipedes (Ord Polyxenidae, France, November 2016) 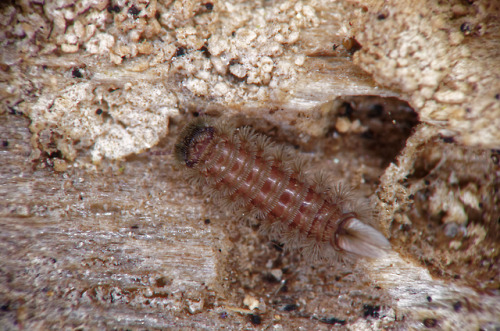 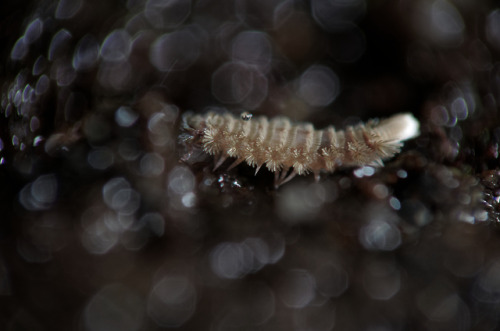 Today my millipedes arrived in the mail! They were just a little chilly, but all of them are okay!

Here’s a video! The abrupt cut at the end is because my camera’s battery died. But yes, all of them look healthy and sound. All four of them have burrowed into the soil for now. They are nocturnal and will come out at night.

So far the only name I picked out is Majin Buu for the smokey oak. Specifically, he is named after Innocent Buu, cause Buu is goddamn adorable. Thankfully, the millipede won’t be able to turn people into candy and eat them.

So that leaves the globular, cherry foot, and rainbow millipede that need names.

For now I’m just so happy they are here :3