Seth’s shit eating grin was the best part of that whole segment!! The rest was awkward and funnier than it was meant to be. 🤣

Spider-man vs the Sinister Six by J Totino Tedesco Summary: Quentin picks you as his tailor but he has a more nefarious goal in mind.

“Be a doll and fetch the pins for me, would you sweetheart?” Quentin flashes his best smile at you. “I’m not sure it sits around the waist right.”

Of course this was just bullshit. The suit fit fine, it was textured spandex. The real reason he’d asked was because you would have to get down on your knees in front of him to take new measurements.

It’d been a stroke of genius to find a down on their luck costumer for his Mysterio gig, someone who’d work for peanuts, someone desperate to make a name for themselves that they’d overlook his more…inappropriate behaviours. You were one of eleven candidates he’d had to pick from and you were by far the most fuckable.

Not that he’d got that far yet. 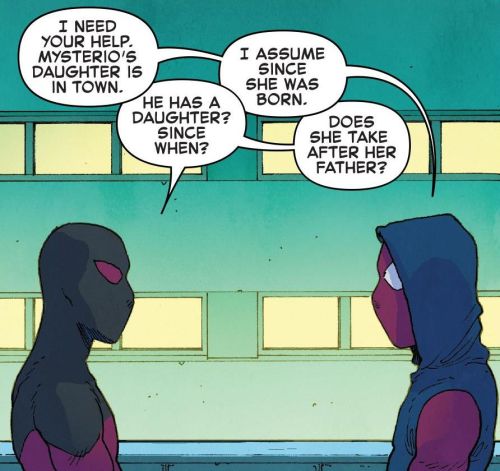 Izzy: What even are we?

Idk why but i just felt the need to post this lol, i’m proud of it

Quentin Beck: I don’t think you know what’s real, Peter. You need to wake up! I mean, look at yourself. You are just a scared little kid! I control the truth! Mysterio is the truth. Deep down, you know i’m right. I can help you if you make the right choice.
Peter Parker: All I need right now is your help.

AU, where Mysterio is Quentin’s other identity. And he’s psychologically unstable. Mysterio commits a crime where Peter is an accomplice. Quentin at first denies any involvement, he doesn’t realize what really happened. He’s trying to help Peter, ‘cause he thinks it’s all Peter’s fault. 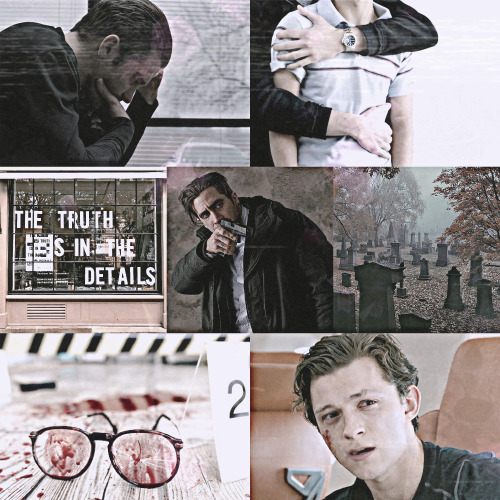 Me: *watches spiderman far from home for the first time*

*me after the movie is over*

Me: I think I’m in love again

#has anyone done this before?, #spiderman far from home, #mysterio, #quentin beck
1 notes · See All
tenandcrowleyText

I love how I ship myself with Quentin Beck

It would be a angsty, yet fluffy relationship

Most of the time, we like to know who the heroes and the villains are right off the bat. This distinction gives us a sense of comfort in knowing which characters to root for. However,  there are certain times when a plot twist comes in and the protagonist was the villain all along! Sometimes, you don’t see it coming. The betrayal punches you right in the gut! Below, you will find some of the surprising villains from my favorite movies. Comment down below which character shocked you the most!

Before Hal becomes Titan, he is a nerdy guy who works as a cameraman for the local news station. He always follows Roxanne around to find the latest information about Metroman. His affections for his coworker are painstakingly obvious, but she is too nice to outright turn him down. Once Metroman leaves the city for good, Megamind takes over Metro City. He needs a new hero to battle. What better person to take Metroman’s place than the guy who knows everything about  him and the powers it takes to be a superhero? Hal seems the perfect fit, so Megamind disguises himself as a Space Dad to train Hal. He transforms into Titan, and all seems to be going well. Titan has the potential to be a decent hero, but he is so arrogant. His confidence ultimately becomes his downfall. When Roxanne rejects him, he spazzes out and gets all angry. He flips the script and becomes the villain!

This turn of events stabbed me right in my heart! All Miguel wants to do is be a musician. So, when he needs to get back to the land of the living, he searches for Ernesto de la Cruz in hopes of getting his blessing to return. He surely would help his great-great grandson? Right? WRONG. Usually, when someone is put upon a pedestal, eventually, they’ll come crashing down. I think the plot twist in this movie is bigger than Hans from Frozen! Ernesto’s not his relative at all! He’s the man who stole everything from Miguel’s great-great grandfather and murdered him in the process. I won’t spoil the ending, but I am happy with Ernesto de la Cruz’s fateful end. Once you re-watch Coco, all the clues smack you in the face. You’ll never look at this character the same way again.

C’mon. You know I had to add Hans in the mix. I know I said Ernesto de la Cruz’s villainy was more shocking than Hans’ reveal, but for the longest while, Hans had the biggest character twist in Disney history! So far in this company, we’ve seen the same trope over and over. Girl meets boy and marries him even though they’ve only known each other for a short amount of time, or true love’s kiss will save the day. When Elsa accidentally freezes Anna’s heart, she seeks out Hans to heal her because she believes they are soulmates. As the camera pans in their faces to seal the deal, Hans quickly stops the kiss and utters one of the sickest burns ever: “Oh, Anna, if only there was someone out there who loved you.” My whole body screamed in agony the first time I watched this scene! The complete look of betray on Anna’s face is priceless. The whole ambience unfolds as he kills all sources of heat in the room with the intent to kill her. Once he think Anna’s out of the way, there’s no stopping Hans from taking the throne over Elsa!

As a child, this film used to scare me so bad. As I’ve gotten older, though, the comedy is topnotch and the monsters are quite hilarious. Which is why Scrappy-Doo as a villain makes so much sense in the Scooby-Doo universe. When the gang finally thinks that they’ve defeated their culprit, more chaos ensues. Mondavarious was only the face of the plans. Literally! Once they rip his face off, no one is underneath the mask! Instead, Scrappy reveals to be in the robot body the whole time! All this revenge just to become a buff tootsie roll of a dog.

Mysterio’s reveal is a real kick in the face. After Tony Stark’s death, it’s hard for Peter Parker to have a father figure to look up to. He then meets Quentin Beck, AKA Mysterio. They’re chemistry throughout the film entices the viewer to keep watching their relationship grows as superheroes. However, it all comes crashing down when Beck’s plans are revealed to dominate the world and get revenge over everything Stark stood for even if it means crushing Peter in the process. The Mysterio ruse tricks everyone into thinking he’s the good guy, but in reality, he foils the path of expectation. The catastrophic events are strategically planned to make Spider-Man the villain. Mysterio’s actions leave the movie with a cliffhanger. What will happen to Peter Parker?

Based on Stan Lee’s Marvel comic book, Spider-Man: Far From Home (2019) is a story of Peter Parker, the teenage superhero Spider-Man and his struggles to keep up with the superhero business after the death of Tony Stark in the previous Marvel film, Avengers: Endgame (2019). Directed by the one and only Jon Watts and written by Chris McKenna and Erik Sommers, Spider-Man: Far From Home is my favorite Marvel superhero film, mainly due to the movie’s accurate depiction of teenagers and their struggles in the most raw, intimate ways which touched my heart. This analysis will be mainly on what makes Spider-Man: Far From Home such a great film when it comes to depicting teenagers and links to the idea of growing out of our younger days to gradually and inevitably become adults.

Me: watching edits of my current favourite bad guy