Lewis shouted in surprise when there was a sudden man shaped weight against his back, thankful that even as a ghost his upper body was incredibly sturdy.  “Whoa, what the-?”

“You’re just a softie,” Arthur said out of nowhere as he snuggled into his icy cold back. He could feel the extra warmth from his cheeks through his ghostly clothes. “Biiiiiig old softie sweetheart. Like a purple… purple giant sheepy sheep man.”

“Uuuuuh…” Lewis looked as much back as he could, looking over at their girlfriend with his eyes pleading for any assistance he could get. He had no idea what the fuck was going on.

“You started drinking again, didn’t you?” Vivi said as she got up form her laptop, peeling the now obviously drunk man off their newly shared boyfriend. “I thought you said ‘never again’ after the time you tried to buy an actual giant mech from Japan…”

“But it’s in celeb’rtion!” Arthur slurred only a bit, able to remain standing with no assistance once Vivi steadied him. “I-I got. I got the thing! I got the- well I can’t tell you it’s a surprise, but I was so happy I jus’ kinda chugged all the wine in my mini fridge and now I’m only kinda drunk but!” He breathed in holding up his hands. “I’ve stopped, see, and now I just wanna show you how much I loooooove you!” He smiled goofily,  arms sticking up in the air as he started sliding down the wall to sit on the ground.

“Arthur gets really goofy when he’s drunk,” Vivi explained, going to get some water from the kitchen. “He’ll be fine but he’s going to be incredibly embarrassed when he is sober again.”

Well. Now Lewis was only more confused and more intrigued as to what kind of surprise could make Arthur happy drunk into this.

After five weeks of work, my computer crashing and erasing every single file off of it, art block, and some general life stress, I can finally safely announce that my Never Sleep Again MSA AU ask blog will be opening tomorrow (1/20/19, 4 PM EST)!
Many of my friends have called me a masochist for how much I’ve put into this project, and while they may be somewhat correct, I have nonetheless had so much fun planning this out, and I am so unbelievably excited to start telling this story!!! I hope you’ll enjoy it as much as I’ve enjoyed working on it!!!!

(Also, the majority of it will not be animated, I should clarify- I am just extremely extra, haha! And as always, please don’t repost my art. <3)

theoretically…. if I were to make a the guy who didn’t like musicals au for mystery skulls…….

Have a bunch of MSA!The Gang™ sketches I worked on in the past week.

Phase 2, Fleshing out the roles:

I also wanna give special thanks to @ryctone for being so supportive and helping me out with the ideas!! <3

I’ll draw their actual designs one day I promise

Vivi: Now, to be fair to Arthur- and, actually, I take that back, I don’t think this is being fair-

Lewis: Oh, come on, you don’t need to do this in front of God and everybody.

Vivi: He also won’t eat things that are too sweet.

Lewis: Yeah- this is the thing I don’t understand! Like, if it was just spicy, I could- like, that’s mostly normal. But then if- if you get an over-frosted cake or something, you won’t eat that either. It baffles me. Like, the things you do eat- voluntarily- are…

Lewis: Yeah! But then you get, like, cupcakes, and you’re like ‘no, this is disgusting, I can’t eat it.’

Arthur: I just- I th-think it’s gross! It makes my t-teeth hurt.

Vivi: Yeah! You say that! And I figured you had a cavity but no, you’re just like this.

Arthur: But- but I don’t th-think it’s a bad thing-

Vivi: It’s- sweet things are, like, one of life’s greatest pleasures! And you’ve just arbitrarily decided to deprive yourself of it?

Lewis: Yeah, I don’t want to be rude, but I’m with Vivi here. I don’t understand it at all.

Arthur: Y- you two are acting like I won’t eat anything s-sweet, period. When that’s- that’s not true! It’s just, like, sugar for- for the sake of s-sugar-

Vivi: Fudge. That’s the thing that got me. You don’t like fudge.

This is my contribution to the lewthur community. 2 hours+. TAKE IT.

Been stepping up my Lewis drawing skills. I love this man so much ;v;

“I’ve been in-love with you since we were kids.”

Had it been only a few months ago the air around them would feel so tense after those words. But now, now the words hung between them like falling autumn leaves.

“I think I knew that,” Lewis admitted after a while. “At least after everything that happened. Before, I don’t know, but thinking back on everything now it’s kind of obvious.” He floated gently over the other two as they laid on the couch in the dark with only the TV to illumnate them.

The reply made Arthur laugh a bit, leaning more into Vivi. “I probably came off as more shy and awkward than ‘I have a massive crush on you’ back then, I didn’t really realize what these feelings were until you came back. Growing up with Uncle Lance I was more focused on learning about machines than learning what it mean when it felt like someone gut punched shards of warm ice into you.”

“Artie that may be the strangest and most beautiful way to describe having butterflies in your stomach,” Vivi said with a laugh.

Lewis couldn’t help but laugh a bit too, laying his head on top of Arthur’s. This awkward man would always be a bright spark in his afterlife, he knew it.

“I can’t, Noodle Boy,” Red Son tried to argue half heartedly, looking out the window. “You know I can’t.”

MK went quiet for a moment, curling a bit back into the wall his bed was againt. “I… I know, I just… I hate watching you go back there, Red.” He frowned, pulling his legs more into his chest.

Sighing, Red Son moved from the end of the bed and sat back next to the shorter man to lay a hand on his shoulder. “Hey… I want to stay, you know that right?” He waited for him to nod in response before continuing. “If I could I would stay with you, I would. But…” He shook his head, groaning as he laid back against the pillows and covered his eyes with his arm. “I don’t want to leave. I really don’t want my parents to find out I snuck out here, but I don’t want to leave even more.”

Suddenly there was a thump of weight against his stomach and he let out a startled, but not pained, groan as he removed his arm from his eyes. “Then stay,” MK said. “We can deal with that if they find out. I just…” He looked up at Red with a frown. “I know you haven’t been sleeping when you aren’t here.”

The worry in MK’s voice broke down Red’s resolve and he sighed. He was right. Red Son hadn’t been sleeping, at least not properly, since he had started spending time with the other man. Whether it was more out of paranoia that they would be discovered or wanting to return to his side was up in the air.

“Sleep for the rest of your last hour?” MK asked softly, sitting up and smiling softly. “I’ll wake you up. If you still want to leave when it’s time to go I won’t stop you. But if you want to stay you can stay as long as you want. I promise.”

There was an implication there of more past the night. Long past one night. Instead of acknowledging it he nodded and allowed MK to pull him up (when had he gotten strong enough to move him around like that stuffed animal he slept with?) and lay him on on his chest. He could heard the human’s heart beat, strong and loud in his ear and it took a lot less time for him to drift off to sleep.

Fuck it. He already made up his mind. He’d deal with the consequences when it came time.

I’m still not a professional animator but I just wanted to make a little animatic, it’s not finished, I repeat, IT’S NOT FINISHED but I couldn’t stand the urge to publish it jajaja, so I promise to finish it before the end of the year UmU 💛

(and do not worry, if there is a problem with the copyright I will remove it)

Working on a Werewolf Arthur design

I kinda like the design, though i may work on the colors and markings

arthur kingsmen with soap carving and fluffy things for @fishbones-wishbones! 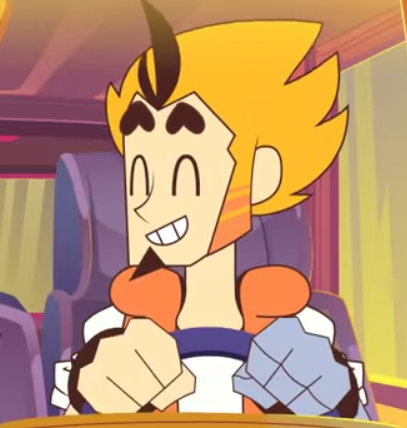 I made an animation meme! :D it’s for my MSA AU and it features Arthur.

Laurel’s old dress or the typical dress of her ethnic group!

Laurel is an indigenous descendant (Nina Nuna), hence a part of the origin of her spiritual powers.

I also present her protective spirit, Sisa the illa. (She not is a cat!)

I hope to start a blog about her and the gang soon!

Please do not trace, use, or repost

“So… did you know that all our friends have a bet going that we end up together?”

“Oh really?” Lewis laughed out, human face showing the incredible amusement he couldn’t show properly in skeleton ghost form. “And who exactly is ‘all’, Vi?”

“Literally everyone we know,” She said with a smirk, turning to look at a slowly blushing Arthur to her right. “According to a certain little sweetheart that may or may not be related to a spooky boy it is everyone. Even Uncle Lance.”

Arthur sputtered around his drink, face finally flushing that adorable deep red she and Lewis loved so much. “WHAT?”

“Oh really!?” Lewis repeated, even more elated at learning this. His smile shrunk and turned into a pleased smirk as he turned to the blonde to his left along side his girlfriend. “Well, isn’t that interesting?”

Arthur leaned back into the couch, away from the two slowly leaning into either side of him but in the completely wrong direction.

“Yes, very interesting,” Vivi replied, trying to hold back her own laugher.

The mechanic let out a soft whine of despair before both of them grabbed his shoulder and smooched his cheeks in unison. His brain fried and for a hot second he couldn’t think. Then he rebooted and let out a yell of embarrassed acceptance.

Finally.  No one needed to tell Arthur everyone knew already, though, and the best was really about when they started and when they would reveal themselves. He had enough to think about already.