fuck thiala and her delusions of godhood but pulling a winter soldier and catching hardwon’s javelin? dual wielding greatswords? 👀👀

anyway i’m so proud of my boys!!!!! hardwon with several valid points and the good old fashioned “that’s a dumb plan” rebuttal, beverly with that 26 persuasion roll and the fucking emotional appeal!! that’s my SON!!!!

holy shit this war council was intense as fuck, “there’s no dealing with someone who calls themself a god” you’re RIGHT and you should SAY IT and now holy shittttttttt this is gonna have so many fantasy geopolitical implications!!!!!!

Moonshine isn’t quite sure when she stopped believing in a future. Maybe it was watching the way the crown burned Pendergreens when he put it on, or maybe it was watching Thiala kill thousands and thousands of people without batting an eye. Or maybe it was earlier, much earlier, when Marabelle died and she hadn’t been able to do anything but give her peace. It doesn’t really matter. She knows that Bev and Hardwon are planning for the time after the war. She knows that they think they’re going to win, are certain they’re going to win, and that’s why she says she’ll go to Hell; there’s no future for her, and she’ll happily suffer an eternity before she takes theirs.

It’s only when she talks to Lydia Stormborn, self-appointed Dark Lord of Shadowfell, General of the Undead, and Lydia tells her that she deserves to be heard, that she’s overwhelmed by a brief glimpse of light.

Hardwon doesn’t have a father, and he never has, and so when King Coldain offers to choose him as his heir, he’s overwhelmed. He accepts, he thinks, and tries his best to be polite. It’s an honor. It’s more than anyone has ever offered him – to be a king, to be a dwarf, to be a son, all at once. It’s only when he finds out that Moonshine had been planning on leaving them and going to hell and he feels a terrible wrench in his heart that he realizes that that’s all wrong. Coldain isn’t his family, and he doesn’t need a damn father. He’s always been a dwarf, he’s the son of a mother who died to save him, and he’s never had any desire to be king. All he wants is Moonshine and Bev and Balnor and his mom and the Crick, and the real honor is that he has them.

Fuck him. Fuck him. It’s pouring rain and Lydia and Red and Gunther are running and Lydia is alone with their baby – her baby, fuck him – but she can hear the clank of Galad’s plate gaining on them as they inch closer to the docks and the SS Stormborn and safety. Except it’s not safety, because they’re not going to make it. She can hear Red’s and Gunther’s breathing, and they’re panting but she’s not, and so she yells, over the thundering rain – “Take him! Take Elias, I’ll buy you time, get out of here!” and passes her baby to Gunther, who grunts. Red nods. They keep running. Lydia turns and draws her sword.

The look on Galad’s face when he catches up and sees her ready and waiting is almost worth what comes next.

me: that’s HIM that’s my BOY i love him sO MUCH he’s so GOOD and i love hIM look at him GO that’s my magic B O Y

im just s sitting here in my living room, trying not to cry and or scream at episode 70 while people give me the side eye but it’s about the LOVE

THEY LOVE THEIR MOMS

hes such a momma’s boy and im crying hell yes “i will have to banish you if you razz my son.” lydia over there with that top tier humor as WELL

you got a lot to teach me still, mom, im dumb as hell

#naddpod spoilers, #the whole beverly/cyril thing is truly the worst, #i know it is not the most cursed liveshow seeing as that sucubus ones with the teen rave exists
1 notes · See All
bettaxfishPhoto

casper’s really going through it, huh?

[image id: Vampire Hardwon Surefoot peeks out of a coffin-shaped space on the canvas. He has pale skin with purple veins and white hair streaked with light grey. He is wearing a dark red pirate captain’s hat, with two feathers and a lightning-bolt pin that is glowing slightly. He wears a blue jacket with a light blue collar, a breast pocket, and yellow buttons. The background is dark purple with a pattern of black bats across it. end id] 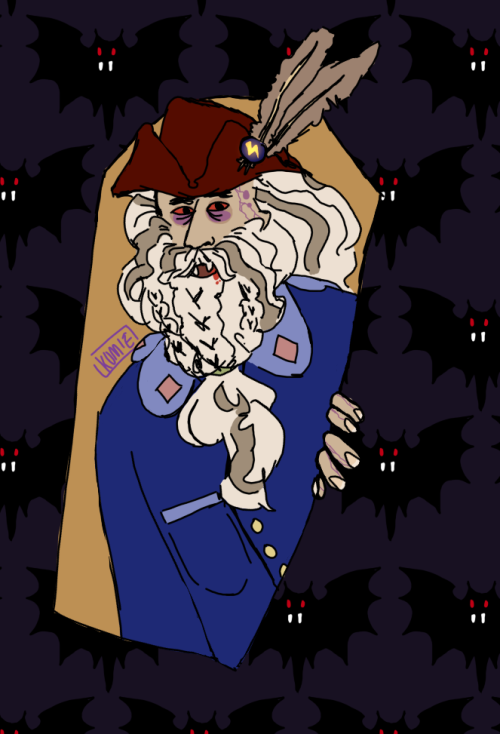 #naddpod, #hardwon surefoot, #naddpod spoilers, #ig? idk but this is pretty far into the podcast so ill tag it, #my/art
5 notes · See All
spacetrashpileText

DID RIZ JUST PULL A FUCKING MOONSHINE THIS IS A GLORIOUS DAY!

Emily’s chaotic energy had to rub off on Murph at some point and it’s right now with the grappling hook and jumping off the stairs like moonshine did on the S.S.Stormborn in NADDPOD. I fucking love these married dorks!