Just mindin’ my own business and hangin’ out with @identity-jay 😌✨

It’s been decades since the last time I checked my Tumblr, and hell the spam bots are everywhere please save me 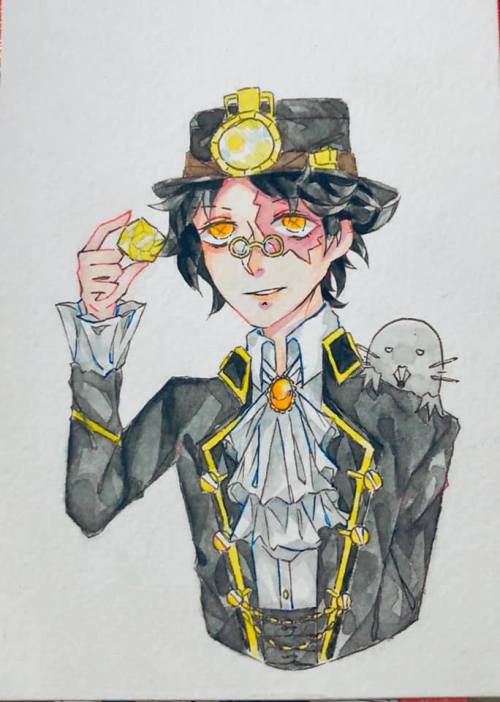 Yes ma’am. I’ll steer clear of those three. I chose a survivor for this since there aren’t any male hunters I could think for you. As for who I pair you with:

You and Naib both share that scary appearance. He himself is quite rude, though he isn’t shy. I think he’d prefer a shy girlfriend over an outgoing one mainly because he can’t stomach energetic people for too long. He’s the type to be drawn to someone who mimics his personality, so he feels comfortable around you. You both need time to warm up to one another, which is just fine by him. It’s alright that you don’t like PDA because neither does he. Naib admires your pain tolerance, because he himself has developed an intolerance to pain as well with having to rescue others and being from a military background. He can empathize with you on the low self esteem, because his isn’t in the best shape either, though he’s more likely to be blunt and say you shouldn’t feel insecure and then go on a tangent about all the things that make you great. The self deprecating jokes may piss him off a little since he cares very much for you and doesn’t see why you do it. It’s good that you’re talkative when you warm up to him, because you’re probably gonna do most of the talking anyways. Naib has a horrible temper, so pairing that with your seriousness may help him calm down. He also loves that you hate crowded areas, because being away from people helps him feel relaxed and lets him be affectionate towards you without feeling like others are gonna watch. Since you are an INTP, you obviously are inclined to go about emotions and feelings in a logical way, which Naib would need. He doesn’t need a woman to coddle him and stroke his ego or say some mushy shit. He would need someone to support him and help him fix his issues by actually solving the problem. Overall I think you would be a good match for him because you both have similar personalities which is something that Naib looks for in partners. He doesn’t really believe in opposites attract.

Naib Subedar crushing on you

Probably a little out of charecter but whatever lolz. Pretty sure Naib js middle eastern, fun fact. :)

- likely, you were a veteran at the mansion. Watching person after person get put onto the rocket and to get ejected back into the manor made you feel.. guiltily. This probably lead you to meeting your boyfriend, Naib Subeder.

- it was probably at the end of the match and the cipher just had been popped while Naib was kitting the hunter. The hunter, Joseph, used detention to go to the exit gate on the other side of the map.

- running to Naib, you took him off the rocket chair and went to the exit gate which you had already opened. Everyone of your teamates escaped, leading your team having a perfect escape.

- Naib would probably wouldn’t realize he loved you, unless questioned about his actions and told he loved you. “Naib, what do you have? A crush on my lovely [ Name ]?” Theif sneared at the green hooded man. Theif, like Emma, has a major obsession with you. And, too, like Emma it was unhealthy.

- because of the Theif’s unhealthy obsession of you, Naib as his “comerad” felt as if he too has to protect you. While Naib does find the Theif’s methods unethical, as long as he dosen’t hurt you he’s alright with it. Well- he dosen’t know what happened all those years ago.

- Naib, rarely, talks to anyone. He does, indeed, talk. However, due to his war experiences he’s just adapted to being quiet. Although, he is very talkative to his friends (like you).

- Naib saves you whenver you get chaired or whenver your having trouble kitting the hunter. After Naib saves you, he hugs you happy that you were alive. You just assumed it was an old habit from his time participating in war. Him constantly watching the ones close to him die.

- Naib, or you, probably would’ve accidentally asked his S/O out. Maybe you had a nightmare and went to the Mercenary’s door. Your hand on the ex-soilder’s door, but then putting your hand down and turning around. “What do you need?” The Mercenary opened his door looking at you. He was is a professional soilder, of course he could hear you coming.

- “Are you alright?” Naib grabbed your hand and lead you into the room. They layed down next to each other on the Mercenary’s bed. Maybe you kissed him on the cheek, or he kissed yours. 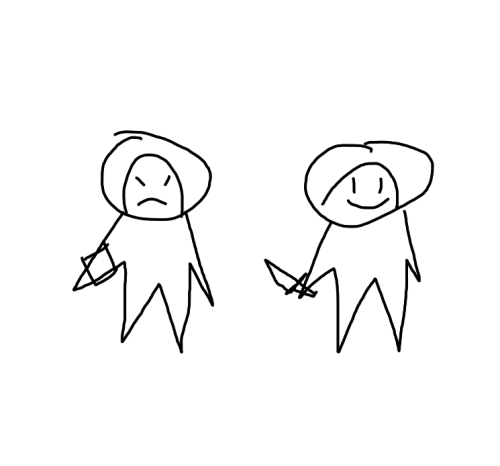 Hi y’all! I got a little tired of constantly refreshing the IDV x reader tag because I’ve already read everything that’s in there! My solution?

I’m gonna start writing them too!

But in order to write them, I kinda sorta need requests or ideas - from you! Dear reader! I’m sure not every one wants a Luchino x reader spam, so please… tell me what you wanna read! Your deepest, darkest desires!

Of course, I do unfortunately gotta limit those deepest, darkest desires.. There are some things I just won’t do, see the read more for more info!

naib and eli clothes colorpicked from their basic outfits again

I offer one Mercenary today 🥺. 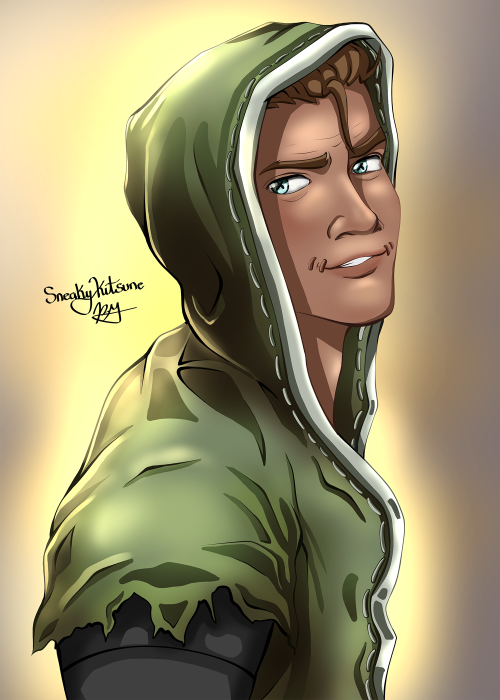 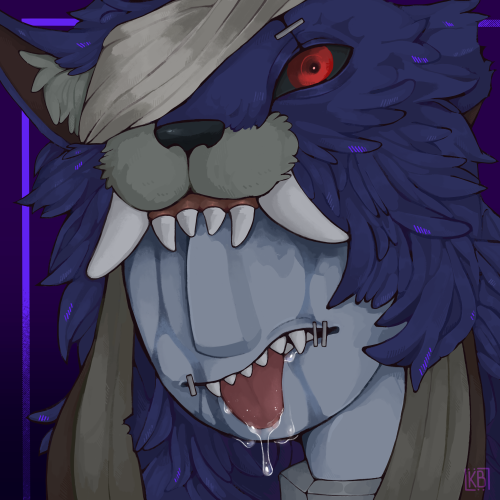 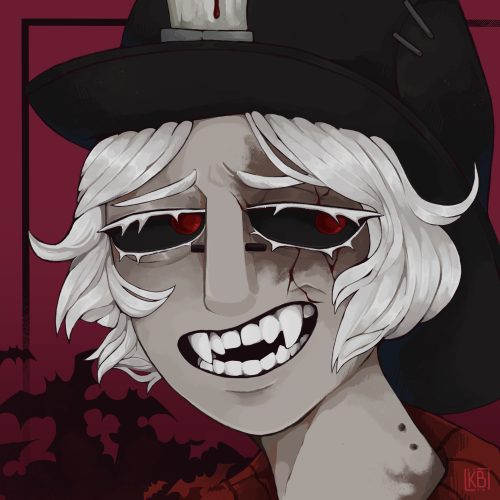 We be brawling. Mind your business.

So Naib is very protective of you during any time of your friendship and relationship. Befriending him wasn’t too too hard, but he becomes attached to you quite quickly. He never actually says it since he’s the quiet, stoic type and would rather just care for you in his own way.

He’s very reckless and he hates being scolded by you or anyone. He’s just trying to keep you safe, but he knows you’re doing it out of love.

Getting any sort of reaction out of the man will be hard. Away from everyone, you’ll get more like little smiles or blushes, but near others he’s same old same old. Holding his hand in public may make him blush ever so slightly, but that’s it.

Speaking of, he doesn’t really like PDA. He’s soft for you and will eventually crack if you persist enough with affection, but he doesn’t want that in front of others. He’d prefer to keep it away from the public so he can relax.

He tells you stories about his life of being in the military and being a mercenary, and how he ended up getting hurt. He doesn’t normally tell a whole lot of people because he doesn’t wanna appear weak, but he loves you and knows you won’t view him any less. He isn’t affectionate, so things like this will let you know just how much he truly does care.

He may teach you how to fight if you don’t know how so you can be prepared for the next game.

He follows you around during games and is consistently body blocking, rescuing, or taking hits for you. If the hunter camps you, he’d try to get himself put on the chair in replace of you so you can get out instead.

He doesn’t really have any date preferences and would rather just stay in your room and cuddle or talk about your days. Well..you talk and he listen.

Speaking of, he’s a great listener. He doesn’t really offer any advice, but he’s paying attention and can repeat your whole rant back to you if need be. He wants to be there for you in his own way. He’s good at fighting, not at feeling.

He may not be affectionate, but he loves hugging you and receiving little kisses on his cheek.

Quiet during sex, but will occasionally grunt and pant. It’s mostly because he’s flustered and doesn’t know what to say during this.

He’s a top. I can’t see him bottoming or being a switch.

He can be rough and prefers positions where he can go deeply inside of you. He isn’t picky on the positions and will let you decide on what you want, but either way it’s going to be hard.

He would probably just have an average dick, similar to how Eli would. Just average length and size, and a bit of hair.

He doesn’t really have any kinks or anything. He wouldn’t mind tying you up though, and he’s down to try any thing you want within reason. Some things he won’t cross.

my take on a dark(er?) skinned naib since he’s south asian but i never get his fuckihjn hair right. and norton. there’s always norton.

Apparently Naib doesn’t like wild boars according to his profile thing. 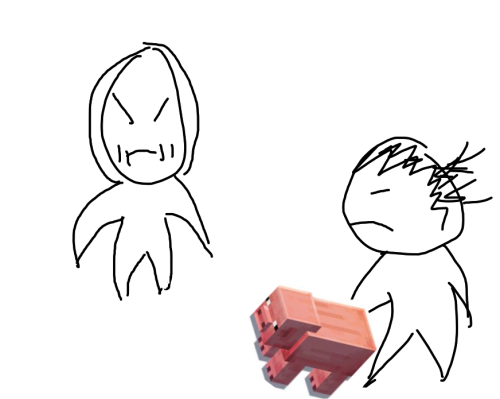 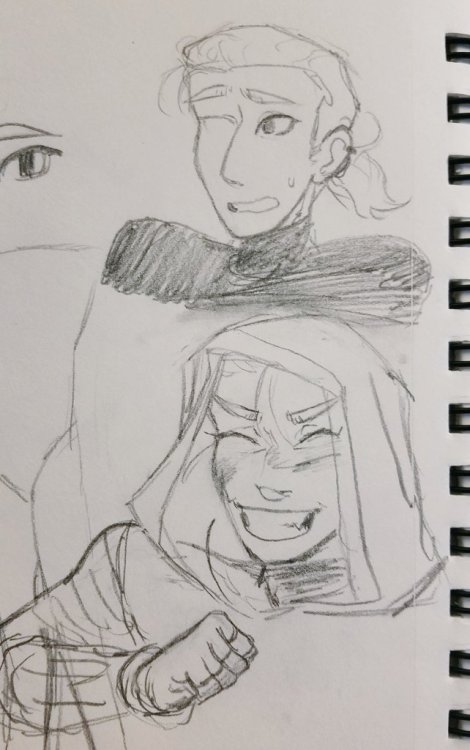 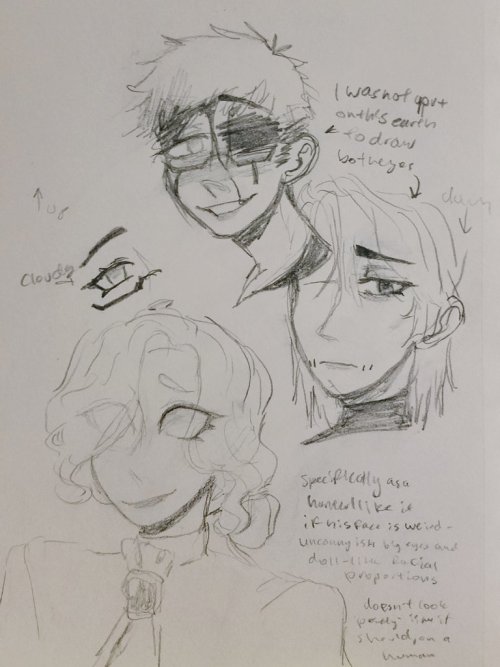 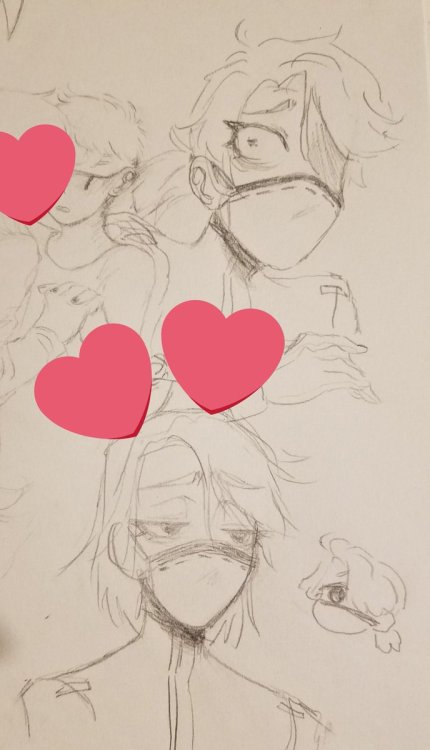 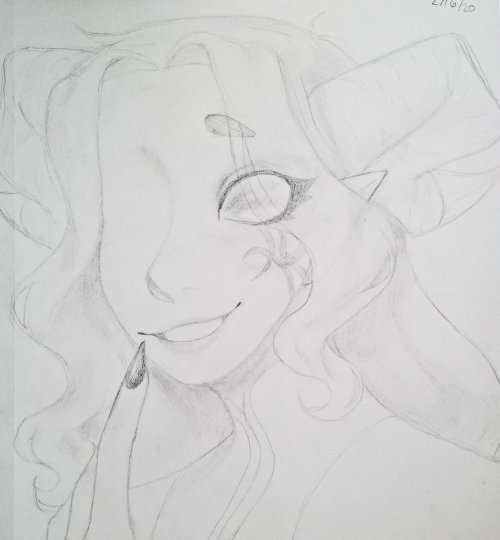 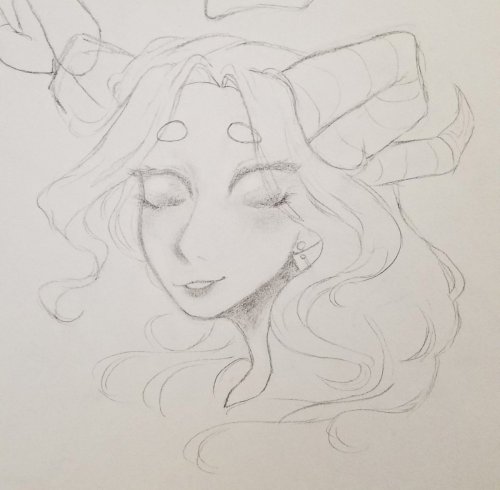 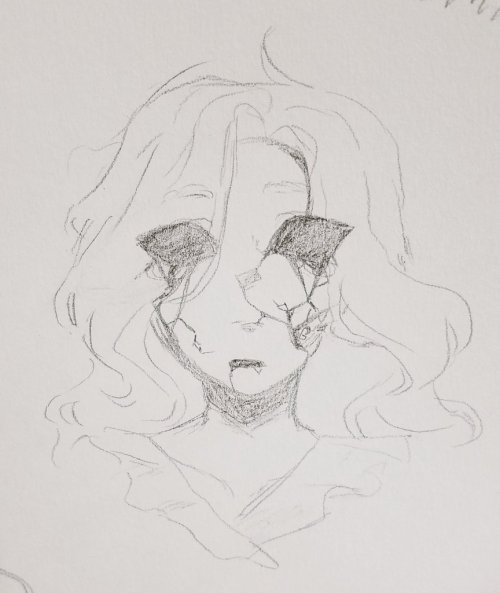 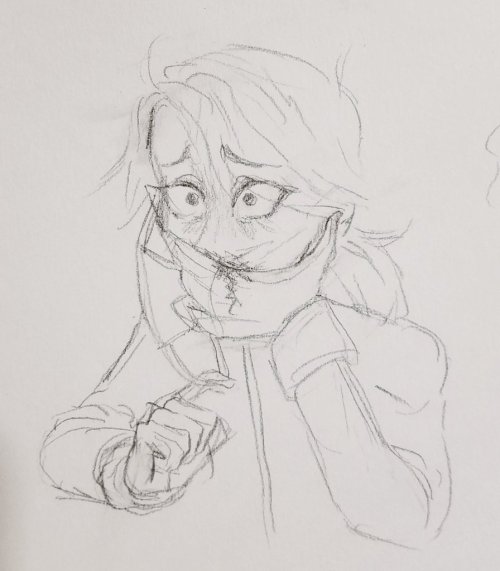 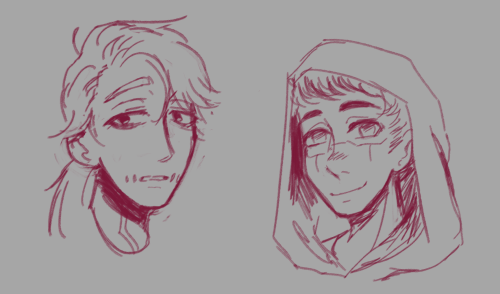 A/N: I was supposed to post this Saturday lol, but I got bored of waiting sooooo here you go! The last request of my old list of requests! I hope you enjoy!

Canon Ship of the day cause I can 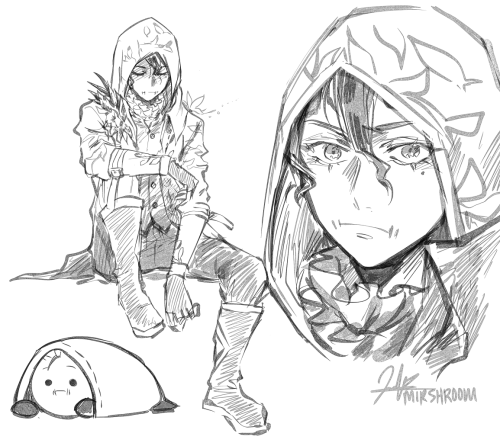