i love this girl sooo much🤧❤️

I’m so sorry, I got my package today then got extremely distracted with that for three hours! Lucky for you guys, I wrote up the first half of this yesterday night before bed…shaved some time off today’s post, sort of…?

Anyway! Hope you enjoy and please let me know what you think!

hashirama teaches science. he has a bad habit of going off on tangents about really, really complicated biology concepts that none of the students understand, but its fine? they guess??? he doesnt really test them on it and it wastes class time so w/e. he does test them on literally everything else though. hashirama gives them like 500000 small homework assignments, but each assignment is essentially “Where does light come from? (10 pts)” and they are all included in the final grade. he wears terrible polos to work and most of the female students and their parents have some sort of crush on him. no one knows who he’s married to, although there are… rumors.

madara, on the other hand, shows up to work in dirty band tees, clearly has not brushed his hair in two years, and reeks of cheap cigarettes. he teaches history. his lessons, when they do not actively contradict the textbook, make fun of it, the publisher, and the school board for making him use it. he’s an anarchist. he talks about the war in vietnam like he was there personally, which is obviously bullshit, since he’s what, 30? he assigns no homework whatsoever, but gives them an infuriatingly vague essay prompt at the end of the semester with no rubric that’s worth their entire grade. his grading is arcane and obscure, and has led to some very heated PTA meetings. no one knows how he still has a job there. 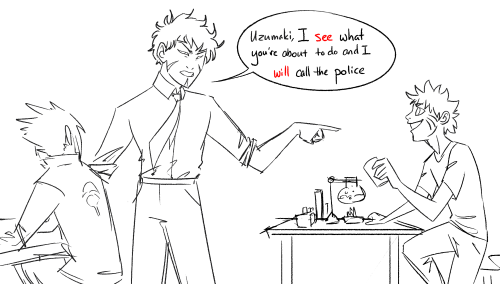 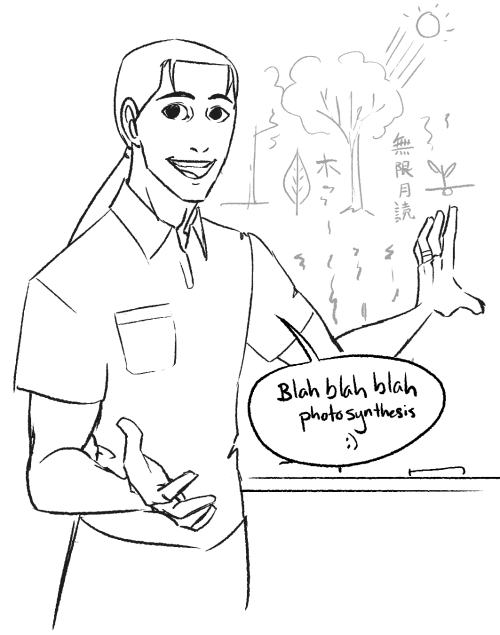 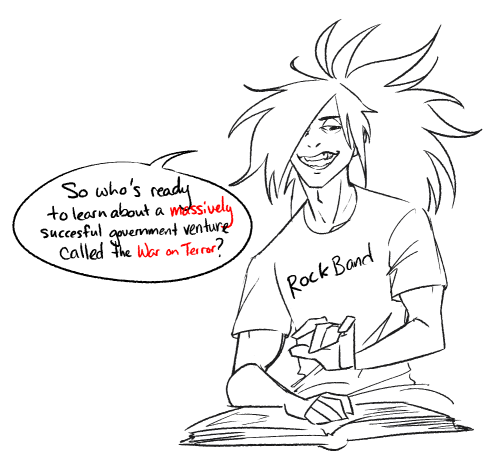 Hey! Dudeee I wish I could tell you the future but I have no timeline,,,,, I am aiming for around 50 chapters though. Quarantine has messed up my schedule lately so I haven’t been writing as much as usual. I’m trying to get back to grinding out chapters.

Hope you’ve been doing well during these weird times anon!

#dearest anon, #naruto, #p&a, #praeludium and allegro, #my fic, #but i did promise i was gonna finish and let me tell you i do not break promises, #i said i was gonna finish this frkn story even if it gets the crappiest ending
0 notes · See All
butterfly-showersAnswer

Hello lovebug! I went ahead and gave you pairings for both! Apologies if they’re both a bit short but, I love you too! I pair you with…

I GOT A NARUTO SHIRT TODAY AT WALMART YAY

Akina Seto. A terribly ordinary girl who was at the wrong place at the wrong time. A girl who just wanted have a family to call her own, friends to hang out with. A girl who didn’t want to be so ordinary anymore. When she moved to the Village Hidden in the Leaves, she knew that this would be her chance to shine. This would be the place she would meet new people and become someone she was proud of. And maybe she gets help along the way by a hyperactive boy who wants to be recognized for his efforts, and become Hokage someday.

Ahhh ok I just love how Shikadai is such an attentive friend for Boruto!

Just look at when they were watching the Kagemasa movie together in Episode 8:

Look at that look!😫😫 checking on Boruto, and simply is just glad and satisfied that he’s enjoying himself😭

It’s so extra because we know that Shikadai is Boruto’s bestie, but for the directors and the writers and the animators to add this on just shows that level of concern that he has for him *chef’s kiss*

Such cuties! Loooovvve their friendship

Naruto forces Sasuke out of the house one day.

Naruto repeatedly badgers Sasuke until Sasuke, annoyed with all the begging and not in the mood with getting a earful from Minako for attacking Naruto, gives in and decides to do as Naruto asks.

It’s the first time Sasuke is made aware of the abuse that Naruto faces on the day to day.

Naruto is lost in his own hand. Dragging Sasuke around to his favourite haunts and he hears people whispering about Naruto dragging along Sasuke.

“What’s that monster doing with that boy.” Sasuke hears and he turns around confused.

Sasuke turns to Naruto. “I thought I heard something.” Sasuke says.

Naruto looks at the people and Sasuke turns his head where Naruto is looking and he sees it.

He doesn’t understand. Are they angry because Naruto is draging him around?

Cause yeah he may not exactly want to be with Naruto but if he really hadnt wanted to go he would have stood his ground. He would have shoved Naruto out the door and then blocked the doorway with as many things as he could.

Besides Naruto isn’t doing anything that Sasuke hasn’t seen several other kids do before.

Whatever Naruto sees, he doesn’t let it pass for more then a moment.

He turns and smiles at Sasuke and continues pulling him along.

They stop off to look at some masks that are hanging off a shop and that’s when things go from bad to worse.

“Get out of here!” The shopkeeper shouts as he pushes Naruto out of the store.

“I just wanted to look at the mask!” Naruto shouted back.

“Take it! We don’t want your money here!” The shopkeeper shouted.

Sasuke doesn’t know what to do. Doesn’t understand. Had Naruto done something? Sasuke had been right beside him and all Naruto had done was stare at a mask that he had been thinking of buying.

But that couldn’t have been all it was… could it? Naruto had to have done something to warrant that reaction.

Naruto turned to stare at the crowd. Sasuke could see Shikamaru standing in the crowd confused as well.

Naruto waits a moment before he grabs the mask and runs off.

“He was just looking!” Sasuke shouts not entirely sure why he’s defending Naruto. “There was no need to do that!”

“Tch” The shopkeeper said turning to him. “Are you gonna buy something or are you just gonna argue?”

#I did see that scene where Naruto is kicked out of the mask shop, #This is my interpretation of what might have happened had Sasuke been apart of it, #naruto, #everyone get's adopted AU, #Sasuke
0 notes · See All
whiteladydragonAnswer

As I mention in another post, it’s more accurate to say that Sasuke, or rather their common interest in him, catalyzed their rivalry, but it didn’t cause it. The true cause of their rivalry was Sakura’s desire to step out of Ino’s shadow and become her equal. Admittedly, the way she decided to declare their rivalry may not have been the ideal or most mature way she could have gone about it, but that’s how she was, then. She hadn’t teamed up with Naruto or Sasuke yet. She wasn’t even yet twelve. Kids, no matter their gender, seldom think or act graciously, though they generally mean no real harm by it. Everyone needs both a starting place for their growth and the will to grow from there. We can’t all be like Itachi (who, I must add, makes his own mistakes despite his precociousness).

Sakura and Ino are both complex individuals in their own right. It’s just easy to miss because their stories more closely resemble reality than do, say, Naruto’s or Sasuke’s.

Let’s review, shall we?

Sakura and Ino first met in the Academy. The former, who used to be quite shy, was often picked on for her forehead. Ino saw this, reached out to her, and chose to take her under her wing.

One of the first things Ino did was give Sakura a ribbon to pull back her bangs, thereby owning her forehead and shaking off the bullies.

She reiterates her belief in Sakura’s potential in another flashback.

Sakura took her advice and began showing off her forehead. With time and effort, she became more confident, to the point where she grew comfortable enough to tell the rest of the girls in her class about her crush. She hadn’t realized then that most of the girls liked Sasuke as she did, never mind Ino. Ino, in turn, was at least as shocked to learn she and her friend were interested in the same boy. However, this fact alone wasn’t what led to their split.

While Ino has always had many noble qualities, that doesn’t mean she can’t still be arrogant and bossy, like your typical “alpha.” She’s the sort of girl who would jump to defend her friend from bullies…

…only to turn around and tease her friend for staying “a bud.” Though she had never stopped believing in Sakura’s potential, the latter was taking too long to realize it in her opinion.

At the same time, Ino had grown too comfortable with their friendship staying the way it was, with her as leader and Sakura as follower. Sakura also recognized this, and unlike Ino, she was not content with it. Indeed, she admired and envied Ino’s gifts, recognizing her superiority then as both a ninja and a person in general.

The only way she could meaningfully grow into her own and become Ino’s equal was to distance herself from her. Once she discovered that Ino was also pursuing Sasuke’s affections, making them direct competitors, she found the courage to go through with what she had been contemplating for some time.

She reiterates this again during their match in the Chunin Exam arc. She thinks to herself how grateful she is to Ino for all the help and encouragement she’d given her…

…but that she would not be a tag-along any longer.

If it wasn’t clear, Ino understood and even agreed with Sakura’s intent. If she didn’t always, she quickly came around to it. Their rivalry had never been about Sasuke. It had been about Sakura stepping out from Ino’s shadow, as a ninja and a person.

Indeed, Sasuke doesn’t come up except as a passing mention in the above flashbacks, and neither Sakura nor Ino demonstrate any concern during the match proper about impressing him. Instead, they focus on giving their all in the match, regardless of their audience.

Their match ends in a draw, and afterwards, Ino acknowledges that Sakura has indeed “blossomed into a flower,” going by both the match and from watching Sakura’s actions against Team Dosu in the Forest of Death.

While their rivalry would continue, they officially reconcile then as friends (though I would argue they never really stopped being friends, to start with). Sakura and Ino are what we might call “vitriolic best buds.” They may bicker and compete with each other every chance they get, even over the pettiest of things–with Sasuke happening to be one of those things, for a time–but they also push each other to be their honest best. Don’t be misled by the nicknames they give each other. When they’re not competing, they support each other’s endeavors wholeheartedly. They are rivals like Naruto and Sasuke are, without all the angst and drama.

Genin SasuSaku is something I will never stop over analyzing & fangirling about on this blog. Because their Genin years saw the birth of their love story.

AND THE GENIN YEARS ARE A TESTAMENT OF HOW STRONG THEIR LOVE IS FOR EACH OTHER.

Tobi when they found out he wasn’t the real Madara: it doesn’t matter, you can call me whatever you want to, madara, tobi, it’s all the same to m-

Naruto :what about Obito

Of course! I pair you with…