The judge panel in CATWS: How do you sleep at night knowing how much of a threat the public considers the Avengers to be?

Natasha: With no underwear in case they want to kiss my ass

The best thing about Captain America is and has always been the girls he hangs out with :

2. Romanrogers (was getting a good buildup until Sharon and Bruce got thrown into the picture)

RarePairs (listen Natasha is bi and has a preference for women)

2. Natasha/ Maria Hill (very competent. would be a secret from the team for like 2 years on accident)

3. Natasha/ Wanda (Eastern European ladies helping each other cope with erasing the red from their ledgers)

4. Natasha/ Laura Barton (in the AU where Clint dies in Endgame instead of Nat maybe?)

5. Natasha/ Nebula (very emotional, leads to positive growth for both of them.)

2. Brucenat (canon but wtf was this shit)

3. Natasha/Tony (happens sometimes in comics. Is a no. )

Hi everyone!!! So sorry for the hiatus, the past few weeks have been hectic!  admin A and I are currently getting ready to go back to uni in the midst of a hurricane and, of course, the pandemic.

We are so thankful for all the love our blog has gotten in such a short amount of time and we will be posting more now that we’ve been settling into the changes!

Our ask box is open so please leave requests and send in submissions for any crack avengers AUs or any concepts you have for marvel in general!

Hey Marvel, what about Director Natasha? That would be pretty cool. 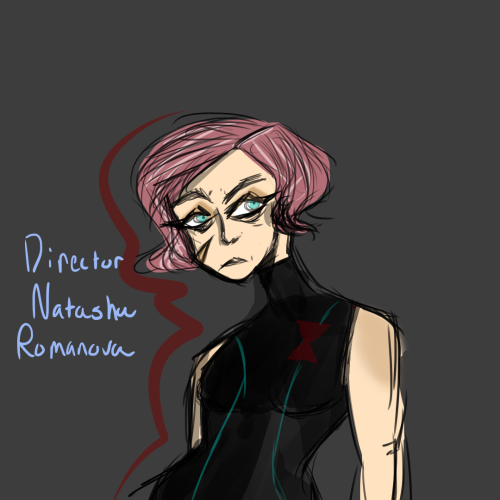 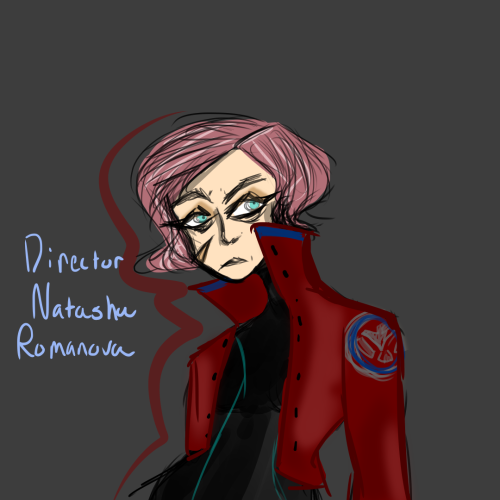 You woke up with a bright smile on your face as you climbed out of your pile of mess before heading outside to wake up Bucky. Your morning was as it was everyday and not one birthday wish.

Tony yelled at you for convincing Peter a poisonous snake had bit him causing him to run around shouting something about becoming spider-snakeman.

Steve lectured you for eating bugs with sugar on them in the backyard.

Sam played blackjack with you for candy while Bucky complained about your volume constantly, saying your breathing made him want to scratch his ears off. On top of that you lost because Sam took the candy you one anyways.

Natasha took shots out of your belly button. Vision phased through the wall to see Natasha drinking alcohol off your naked body. You weren’t embarrassed and nether was Natasha so maybe this wasn’t that bad.

You didn’t receive one happy birthday and though you weren’t expecting one you felt your happiness decreasing and the happiness meter slowly reading empty. You had spent the entire day getting lectured and even Clint seemed mad at you for something.

You suggested ordering Thai food, you were shot down.

You wanted to watch the emoji movie, you were shot down.

You asked Steve to take you to the zoo, he told you some other time.

It was really just a downhill spiral. Until you entered the kitchen to see Wanda with a set of ingredients in front of her and a smile on her face.

“I thought you might want to help me.” Wanda said as your eyebrows furrowed.

“What are you making?” You asked, moving into the space. Wanda offered you a candy and you took it as she spoke.

“A birthday cake.” She said with a small smile before the two of you divulged into chaos getting covered in cake batter, icing, and you are half of the candy before the cake was even done.

When it came out it was lopsided and you couldn’t have been more proud.

- Can I request a Nat x kid!reader where the kid was in foster care and She just recently went to live with Natasha. And it’s taking her a while to warm up but eventually starts calling Nat, mom? Thank you.

- ooh can I request a nat x (adopted)daughter reader where the reader is the kid of a couple that was killed off by a villain because of their powers. avengers and reader don’t know she has powers mostly because they’ve never shown. they finally find out when said villain comes back for reader by attacking avengers and her powers burst out of her unexpectedly and she saves them all?? thinking something of a mix between Wanda’s and Thor’s powers. thank you, love your writing so much!!

- Nat’s daughter telling her she doesn’t wanna be a shield agent/superhero.

A Mr and Mrs Smith AU birthday gift fic for @ceealaina who lets me text her Bucky-themed bullshit at all hours of day or night, thoroughly enables encourages the hundreds of ideas I have, and is always willing to read the nekkid scenes so I don’t feel self conscious about them. I love you!

Mr and Mrs Barnes live a quiet life in a quiet cul-de-sac in the middle of a quiet suburb. Natasha Barnes bakes delicious pies, wears pearls and vacuums and is volunteer president of the Homeowners Association. Bucky Barnes works at an insurance company, chats about lawn maintenance and grilling methods on the weekends, and does the crossword every day. They have a once weekly classy if not predictable date night, once weekly tender if not repetitive sexual congress, and wear coordinating clothes to church every Sunday.

Predictable, quiet, calm… and all together a lie.

When Natasha and Bucky inadvertently discover they are on opposite sides of two competing espionage establishments, their carefully constructed cover comes crashing down. Natasha had no idea her husband was the presumed dead Winter Soldier, Bucky had no clue his demure wife suits up in spandex and high heels to be the Black Widow on her once monthly ‘girl’s nights out’.

Now with their respective agencies convinced they are compromised and therefore expendable, Bucky and Natasha go undercover together to get to the bottom of a plot that could only end with both of them dead. Their marriage was built on lies– but is there enough truth in the years of ‘I love you’ to bring them through this mess?

“I don’t judge people based on their worst mistakes.”

I just realized Nat died before everyone was brought back and the fact that that could mean maybe Bucky got to tell her he remembered her and got to say goodbye. At least that’s one loss he could be more at peace with.

Natasha: If a someone ever calls you princess in a condescending manner, assert your newly appointed royal status and have them beheaded.

“Is there anything else anyone wants to add?” Nick Fury asks, scanning the meeting room in a way that strongly suggests that no one have anything else to add.

“What, Stark?” he asks, his voice somewhere near the juncture of annoyed, put upon and resigned.

“I just feel like we do not acknowledge enough how fantastic James Rhodes is,” Tony says, fooling absolutely no one with his casual tone. “And I, for one, would like to make a motion that he be thanked for being in the same room with us lesser mortals … and Thor.”

Thor looks as if he would rather be left out of this conversation entirely.

Rhodey blushes and raises a hand to cover his mouth.

Everyone stares at Clint.

“What?!” Clint asks. “He’s great in the field and has a very nice butt. I can appreciate that.”

“I knew I could count on you, Birdbrain."

I would just like to tell y’all I’m 49 away from 2,000 people following me and that’s amazing.

It’s fucking amazing that one person even reads anything I do.

But as soon as that 2,000 happens I want to do something to celebrate but I don’t know what…

Maybe personalized imagines for anyone who wants one?

You’d just have to give me a name the person you want and maybe like whether you want angst, fluff, or smut. (I mean a setting would help but that’s cool)

Because I’m down to do some biker!bucky, Viking!bucky, an AU or just regular stuff for anyone. We can do Nat or Steve, Sam, Peter Parker, anyone.

I don’t even know if it’ll happen. I’m close but who knows.

Either way its amazing.