who do you think has deviated from the norms of figure skating most? in the current era or throughout history?

i’m doing some research and would like opinions to look into!

I think we as a collective have to apologize to Vera Wang. The costumes for Nathan are ugly because he has an ugly taste. Have you seen his latest insta post? Socks in sandals. Outside. For others to see. I bet Vera tried very hard but what can you do when your client is a 21-year-old frat boy?

#nathan chen, #vera wang, #figure skating, #don't get me wrong i love him, #but his fashion sense lately? atrocious
12 notes · See All
figureskatingconfessionsText

“Knowing Nathan’s new ‘Philip Glass’ FS will most likely break another WR this season and there’s nothing anyone can do about it is… so satisfying! <3”

Okay I know I’m a Nathan Chen fan but his short lowkey sucks? Like;;; it’s not artistic or interesting to watch at all. And his outfits have managed to get worse lmfao. He got way over scored in program component.

His free skate is pretty okay though can’t complain too much about it, but again not that interesting. Have to go and watch Nemesis to clear my soul lol 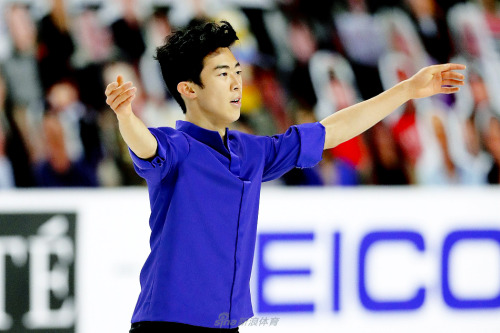 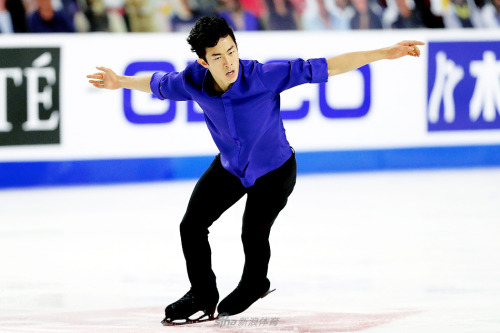 “I don’t get how people can have just one fave. Yuzuru’s my fave for artistry, and Nathan’s my fave for his mostly super smooth quads. And also, it’s less stress because you know one of them will likely win. And, you usually get 4 GP events before the final where your faves skates, instead of 2.” 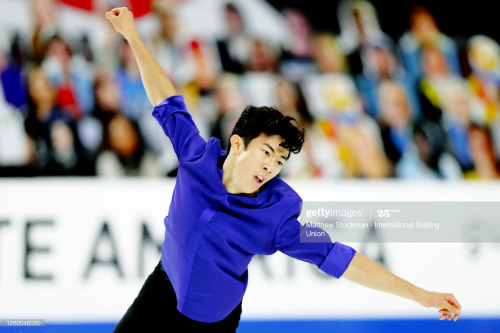 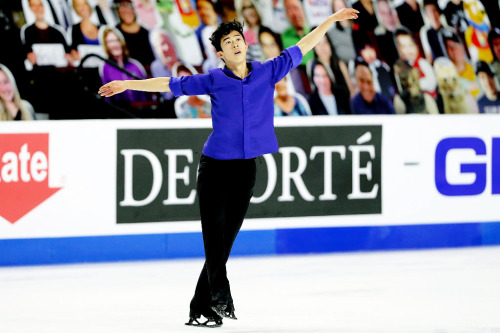 Welcome to the second and final group of men in the Men’s event of Skate America.

Alexei Bychenko starts us off. His Pirates of the Caribbean program is the same from last year. We’ll see that a lot this year. He lands his quad combo well. I love this music. He’s a little more comfortable with this program than last year. Struggles on the second quad. Interesting footwork. I’m not quite sure it fits the theme, but it’s difficult. Not bad. Could be better, but I like the program. He slides into second.

Alexei Krasnozhon landed a beautiful quad in the SP. His program is also the same from last year. Falls hard on his first quad. But comes back with a triple axel combo. I like Alexei. There’s some about him that you want to root for him. i don’t particularly think this program suits him myself, but he tries to perform the hell out it. He drops to third for now. By a point.

Tomoki Hiwatashi is next. He looks so little in his costume. Easy quad combo, but doubles the next one. Tomoki seems like someone with a lot of personality. I wish he would show it more on the ice. I’m not really impressed by this program. I kind of lost interest until the footwork. There’s some personality I was wanting. Not bad. He’s definitely a challenger for Jason and Vincent. He’s in first and Ilia will finish no lower than 5th in his senior debut.

Keegan Messing, our lone Canadian is next. November Rain was a popular choice this season for the men. Lands his quad combo easy as well as his second quad. I like this style for him. It suits his personal skating style. He’s got his jumps today. I love how he gets so low in the hydroplane, his head is on the ice and he gets ice in his hair. He’s happy with it. Not a bad score. He’s guaranteed the bronze.

Vincent Zhou’s shirt is interesting and pretty. Yes, I said pretty. Different kind of program for him. Intense but not classical intense/stiff. Falls on his first quad. Timid on the next quad combo. He’s got his legs back under him I think. I actually really like this program. The first half is really interesting with great choreography. Struggling a bit on his quads. This is the best program I’ve seen from him even with the jump issues. If he can skate it clean, he may give Nathan a challenge that only Yuzuru has been able to give him.

Nathan Chen must be so used to skating last by now. He’s rocking a really blue shirt. He really needs to put more though into his costuming. I loved, LOVED, his Rocketman program last year. This one is already very different tone wise. I like that he tries different styles every year. I think that has helped his artistry more than anything. Was really landing his jumps until he doubled the salchow. I didn’t think I would like this program but it’s really good. He’s not happy about the two missed jumps, which is good. He’s not getting complacent. But he should still win easily.

So Nathan wins (again), Vincent gets 2nd. and Keegan 3rd. Ilia Malinen has an amazing debut and ends up 5th. Great start to the season!

And we have the final group of men.

Alexei Bychenko is another oldie in the bunch. 32 and still skating. Much respect to him. Big triple axel. Then, he falls out of the quad. He’s trying. He baubles the second triple jump on the triple triple, but remains on his feet. This is very dramatic music and I’m not feeling much drama from him. That said, it’s not a bad performance for him. Oops, someone was delayed pushing the audience button. And he’s into 2nd for now.

Vincent Zhou impressed me last year with his looser, more free programs. I don’t think from what I’ve seen at practice that we will get the same this year and that’s a shame. They really suited him. Yep, he’s back to serious programs. This one is more artistic though, so good for him on that. I still feel like he’s trying so hard to be older than he is though. He’s only 19. I forget that. That’s why I liked last year’s programs so much. He wasn’t trying so hard. That said, not a bad short. It’s a lovely program and he skates it well. He’ll be in first easily for now.

Tomoki Hiwastashi is trying to contend with Vincent, Jason, and Nathan and he’s good mostly. I just find he has absolutely no expression or connection throughout his programs. Skating to the fabulous Leslie Odom of Hamilton fame. This program fits him much better than last year’s. Even hides the last of expression he has. Technically, he’s good. He could definitely lead the pack when Jason and Nathan retire. He just needs to inject some personality into his performance. And he skates into second easily.

Camden Pulkinen made a huge splash at last year’s Skate America. Interesting. His wiki said his short was to In This Shirt, but he seems to have gone back to last season’s short. He’s struggling on his jumps here. He’s a lovely skater, but this program is very boring. There’s not a lot of personality in it. Camden gets 7th.

Keegan Messing had a rough fall last year. He had a good year in tribute to his brother and wife. Let’s see if it carries over here. He’s carrying his programs over from last year as well. Hand down on his quad combo. He’s someone looking at him you wouldn’t think was very artistic but he knows how to perform. I know this song has special meaning for him so that might help. Oo, he almost fell during the footwork. Lovely program. He should be in 2nd easily.

Is Nathan Chen wearing suit jacket? That’s different. And Nathan will finish us off tonight. Really different programs for him this year. I like that he changes it up year after year. He’s trying to portray a character with this one. I’m not sure he fully succeeds, but each year he stretches himself artistically and improves each year. Another clean program from Nathan. He’ll be in 1st no problem.

And that’s our short programs for the night (for me anyway. Pairs are next and I don’t like pairs.) See you for the long programs tomorrow I think.

Aww, Nathan didn’t manage his Salchaw or Axel in the Free, but all his other jumps were great as always and he is working on his other elements! I need to watch it a few more times to get a better feel of it, but it looks cool! I have to say I don’t enjoy it as much as last year’s, though. I guess it’s because I just think the music choice isn’t the most suitable for him.

#nathan chen, #fskateedit, #figure skating, #SA 2020, #program, #2S and 1A...throwing it back to 2017, #mmm i liked this program when i first saw it but this performance wasn't great, #guess we'll see how the next comp goes
280 notes · See All
clown-questionText

#nathan chen, #skate america 2020, #figure skating, #i like it a lot more than his sp, #also yeah i’m behind on the livestream whoops, #but i really loved the musicality and performance part of this skate, #grand prix 2020, #not the nats, #fs lb
6 notes · See All
jennibeultimateText

#I know I posted this before but can't find it anymore 🤷‍♀️, #Nathan chen, #figure skating
26 notes · See All
jennibeultimateText

Wait Nathan didn’t receive over 100 TES? When did that happened last?

Funny coincidence: just when I praised Nathan’s stability and talked about his push in scoring, he makes unusual mistakes and his score isn’t this high 😅😂 seems like I jinxed him…

So today’s FS was crazy! Karen’s performance was one of her best in a while, Mariah’s big fall in her fs, and Audrey making her senior debut with amazing programs?! I think Mariah’s fall should have been more downgraded, but well deserved first place for her! Bradie has also made some improvements from last year but her jumping technique could use a bit more flow🙌 overall I think today was pretty good!

Also, NATHEN DID THAT🤩 I was in awe while watching both of his performances

Takes from Skate America ladies and men now it’s over

Well Karen and Audrey were absolutely great. Bradie was meh in my opinion and she skated over the music. Mariah’s music cuts were not good and I really was not a fan.

I agree with the podium but I’m not entirely sure about the scores. And goodness did I enjoy Vincent’s skating at this competition much more than I thought I would. Nathan was great, even with the mistakes, and I like that he’s got attempts at costumes! I’m just not sure about the scoring to be completely honest

Such a shame about the two popped jumps, because otherwise… this is such a good program? I mean, the choreographic details, the spins, the step and choreographic sequences… I am not always the biggest Nathan Chen fan, but… this program is just so good.