it was only fifteen minutes into the lesson and, oh god, you and food tech partner!jeno were hopeless cooks.

you were supposed to be making macaroni and cheese, but at the moment it looked more like play-dough. jeno was on sauce duty, and you were on pasta duty. but so far it wasn’t looking too good, as the sauce was much too runny and the pasta was still as hard as rock.

a whole term had passed since the beginning of the year, along with you being sat next to jeno — and no matter what you two tried to cook, it would turn out a disaster. today’s recipe was no different.

#jaemin, #na jaemin, #nct dream, #nct, #drawing, #illustration, #lol it almost looks like pixel art!!! it was the compression but i like it????, #!aqi created, #kpop, #fanart
0 notes · See All
burntchickennuggetskrrtText

A Twist in my Story

a twist in my story | part LII

[an: sorry for grammar errors, spellings, and other mistakes you might have seen along the way // but i believe in you, you’ll get it 😉❤️ thank you ]

Disclaimer: The references and inspirations used are altered in the stories written. An example would be in Jeno’s. In the actual Incredibles movie, the lovers are actually both superheroes. In Jeno’s story, “Mr. Incredible” is on the bad side. Also, this won’t be uploaded till the second part to “Your Murderer” is out.

Synopsis:
Living in a big city gives you many career opportunities and chances to become a successful news reporter. Your job includes chasing and interviewing the people who have supernatural abilities and protect the place. Your job was going really well, you made lots of friends and enjoyed conversing with the heroes who saved your life. That was until you got yourself in a bit of a sticky situation with the one and only, InvisaMan.

Synopsis: Being the most successful super hero in your city really had its perks.  You were famous and looked up to by most of the city’s population. You never really dealt with too much trouble, your superpowers giving you advantages against most opponents. That was until you met him, the one who would cause havoc on your world.

Genre: Smut, fluff, angst, teen titan au (Haechan is gonna be the only superhero here, I decided I preferred a different story line and changed it)

Synopsis:  Being a criminal meant having an exciting and carefree life, not having to follow the strict rules made by governments. You weren’t alone either, you worked with a group of people who shared the same passion: stealing. Your team, the Hive, decided that stealing at the local museum would be an easy target. Little did you know, you’d end up failing the mission due to a “small” problem.

Synopsis: You held the power of fire and used this power to provide help to the citizens of your city. You never really faced problems with other mages, usually facing problems with the people who had no supernatural abilities. It was an easy win in your opinion. Jaemin was the main target of bullying as a child. He was made fun of for his abnormal blue hair and weird “magic” powers. He was never accepted by the people around him, including his parents. He started acting out in his late high school years, sick and tired of constantly being made fun of for being a weak, insufferable little boy. He trained and started committing crimes in his small town. He was able to create such a big mess there that he thought he could take on a bigger city. After moving, he assumed he could get away with his crimes here too, but that’s where you proved him wrong.

Beauty and the Beast

Synopsis: Being a senior in high school wasn’t as bad as you had expected. You lived carefree and relaxed, not having to worry about your exams as much as you would junior year.  You hung out with friends, spoke back to teachers, and lived as happily as ever. Well maybe if you had started caring sooner, you wouldn’t have owed a mafia member a new car.

Synopsis: Jisung used to hate his super power. It made him angry and envious knowing his friends had physical powers like super strength and shape shifting. He was made fun of for having something so useless and silly. Due to the mocking of others, he started rebelling and using his specialty to steal from big companies. He wanted people to know he could achieve high expectations with small powers. His next target was the wealthiest company in town, and he was confident he could succeed in robbing it. He almost got away with it too, till he met the one person he could not read the mind of.

“Do not swear by the moon, for she changes constantly. then your love would also change.”
― William Shakespeare, Romeo and Juliet

Huang Renjun. Better know as your worst enemy. Your feud with him had been going on for so long that you didn’t even remember how it all started. Looking at how you both acted towards each other it was probably over something petty.

“Wow, amazing, the terrifying and disgusting creature called y/n has returned from her dark cave to participate in social activities.” Renjun greeted you with a smile as you took your seat next to him.

Another thing, your teacher thought it would be a great idea to put you and Renjun together at a desk, even though she knew you two couldn’t stand each other.

“Cut it Huang. I’m not in the mood for your bullshit.” You retorted, putting your head down on your desk.

Renjun rolled his eyes. “Oh no, what made my beloved y/n upset? Who do I need to thank for making my job easier?” he tilted his head in feign empathy, riling you up even more.

“I told you to cut it.” You sneered at him. Yesterday’s argument with your best friend had left you in a bad mood, partly because it was kind of your fault.

“I’m sorry miss ‘I’m not in the mood for your bullshit’, but do I look like I care?”

In a sudden wave of emotion tears started to well up in your eyes. “Just stop it please.”

“Oh, you’re actually crying? Can’t you just tell your brain to stop those chemical reactions or something? You look blobfish out of water when you cry.” Renjun stated rather casually, though for a moment you thought you could hear a glint of worry.

Maybe you should just tell him. You didn’t have that argument with your friend for nothing. She had told you it would be a bad idea since she thought Renjun genuinely hated you, but what’s wrong with trying?

“You know, we’ve known each other for a while now and I’ve been thinking that maybe it’s time to take a step forwards in our relationship.” You said, hoping for a positive reaction.

Lately your fighting with Renjun had been getting more playful than hateful. There was less venom behind the words you exchanged. And you would be lying to yourself if you said that you hadn’t grown fond of the boy next to you.

If you were to go from his behaviour you were pretty sure he felt the same.

“So you mean just not talk to each other anymore? Oh my god I’m happy you brought it up. I knew I wasn’t the only one who was just tired of talking to the other.”

Renjun smiled. A genuine smile. Like the thought of not ever talking to you actually brought him joy.

He had been wanting to ask you if you cold just stop whatever was going on between the you both since he was getting a little tired of you and he didn’t have the energy to actually be mean anymore. He honestly just wanted you to shut up.

Maybe you were wrong.

haechan’s summary:   There are a few questions that Jaemin wants answers to, ‘Why did humans have to evolve in the first place?’; and ‘Why the hell were Renjun and Yangyang so overprotective towards a platonic friend?’ 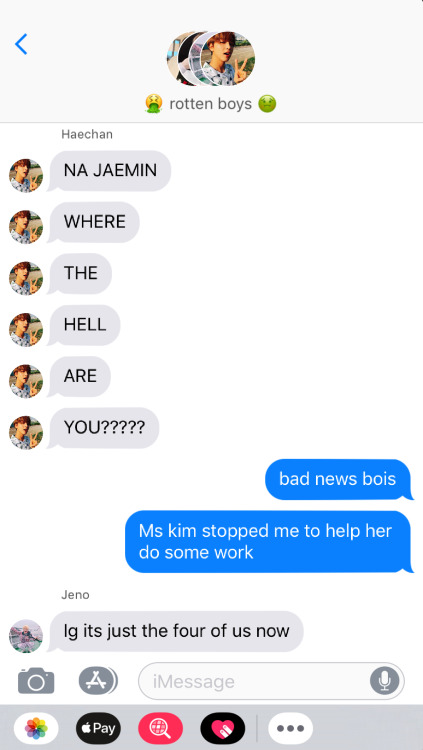 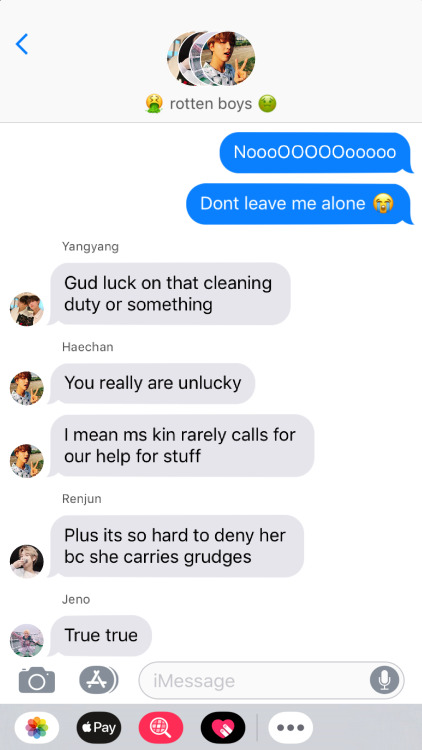 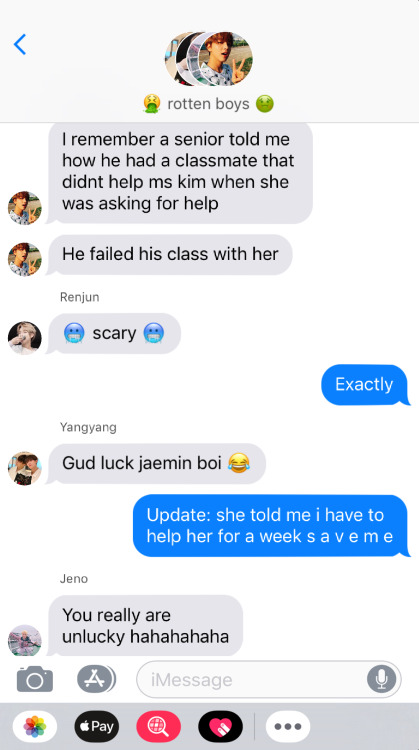 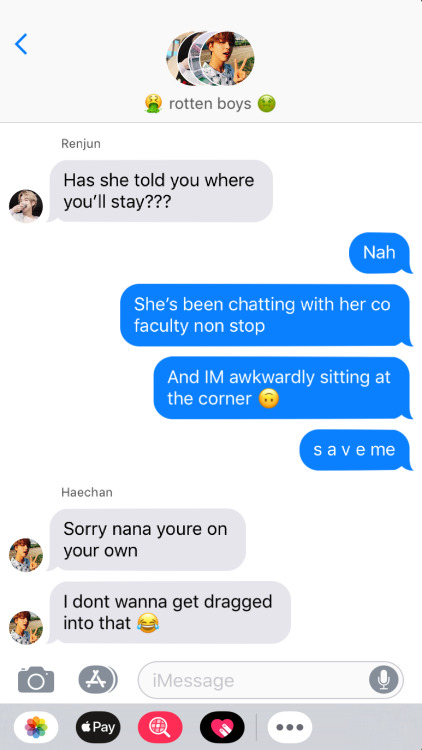 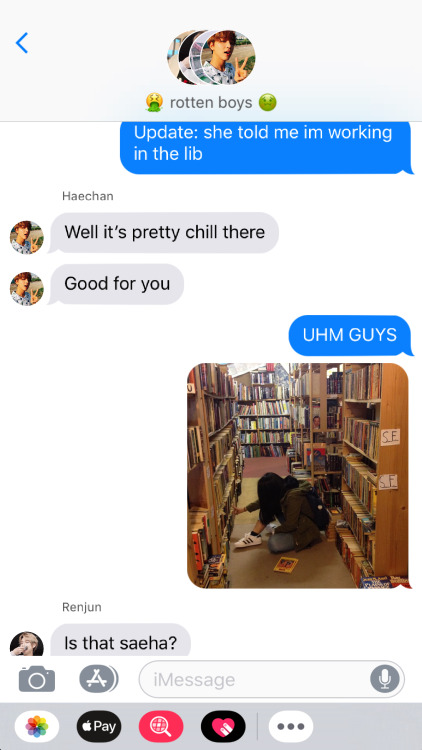 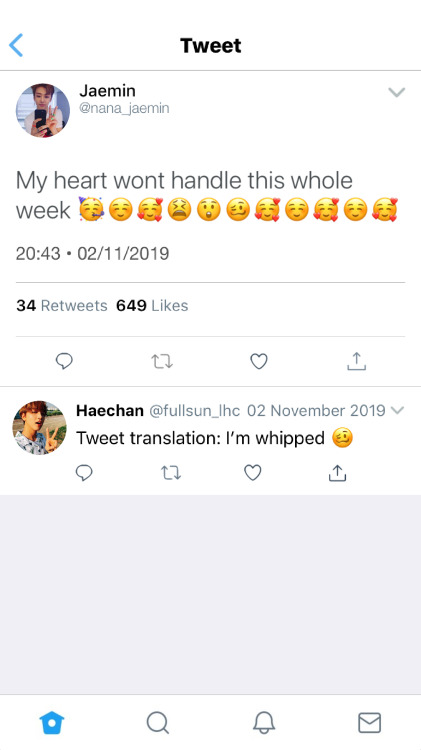