just look at my baby pls

Fixed her eye. Nekoma manager because I want Tora to stop being sad the lack of one. 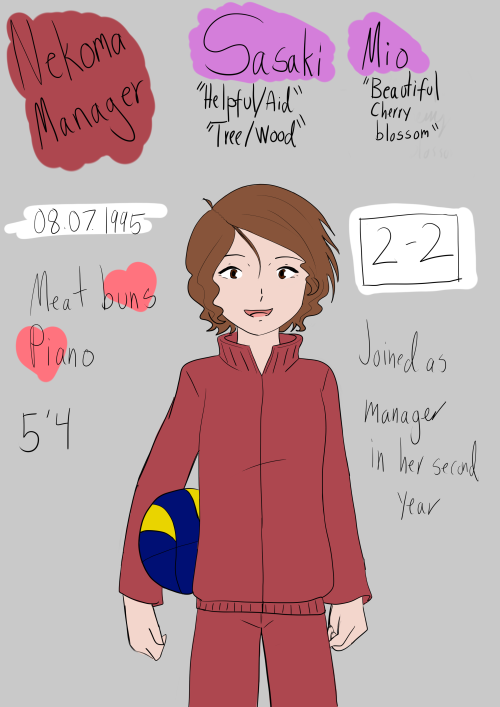 Warnings: a slightly jealous Tsukishima and just lots of fluff.

A/n: Hello, as mentioned on a post before, part of these headcanons are from my writing page on tiktok.(@/coffeeandhcs) Also thanks to @plutointhestars​ & @meowstea​ for beta reading uwu. Requests are open, just please read my rules before sending in an ask. Also, if there’s any other warnings that need to be added, please let me know. I’ll be happy to add them for y’all. Hope y’all enjoy, any feedback would be greatly appreciated :)

**Please note that these were chosen from the perspective of someone who has grown up on the East Coast, I am aware that some of these sports (*ahEm* lacrosse) might not be as popular where you are as they are here.**

**DISCLAIMER: I HAVE NOT PLAYED MOST OF THESE SPORTS, I RESEARCHED THEM TO THE BEST OF MY ABILITY BUT WHO KNOWS, MAYBE I MESSED SOMETHING UP! PLEASE DO NOT BE OFFENDED IF SOMETHING IS OFF, I DID MY BEST!!**

A/N: Sorry it’s so short! I’ve just been caught up in a lot of work!

A/N: It’s my first time writing something like this, so if I wrote something wrong kindly tell me so I can change it! Also, I made it short and didn’t make it too serious because like I said, I don’t feel like I know enough about the topic to be able to write something deeper. Thank you!

Mint goes through 24/7 brainrot for Shiratorizawa and angst while sipping on some iced coffee. 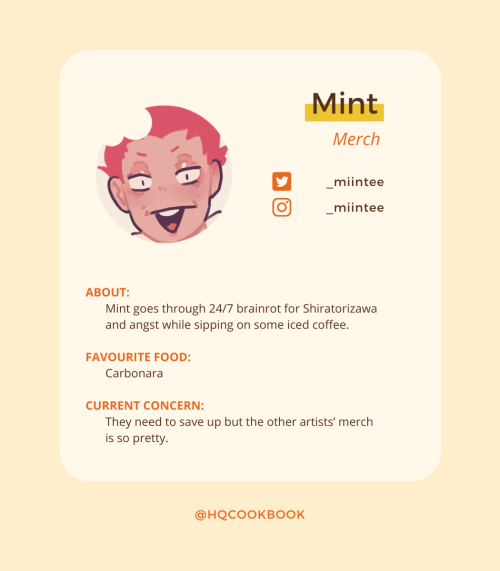 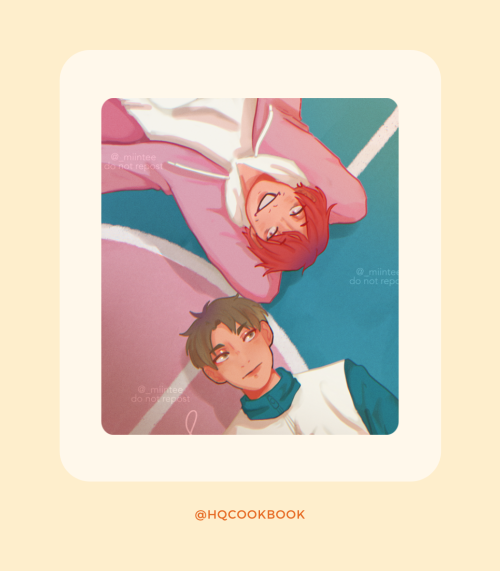 Next up, our cat team! Since Genshin has yet to reveal more on the other 5 cities, I guess most of the Haikyuu characters will be affiliated to Mondstadt or Liyue. We only know that Inazuma’s archon doesn’t give away the Visions or so, and that it’s a closed city. Snezhnaya on the other hand, with the Fatuis and so.

Well, lets go on. The second years will be under the cut.

Kuroo… I see him affiliated to Liyue as his canon occupation as a Sports Promoter. He works in the office, and maybe he has to handle business partnerships with sportsmen, or if in Genshin AU, either partnership with the Fatui or any Adventurers. Maybe even the Knights from Mondstadt or the Milileth.

Now this man here… He definitely has pyro vision. Based on his personality and attitude, like mentioned, he’s cunning, intimidating and a pure dork rooster. His scheming side tho, it’s like Diluc. Diluc plans his move as he goes on his day, just like how Kuroo does while observing his surroundings and people.

His fighting style shows more aggressive and smooth side of him. He’s noted to be flexible and has quick senses. The reason why I see him wielding a claymore, it’s more of a challenge for him. Kuroo loves challenges. Be it wielding different weapons to experimenting different fighting styles that he can make up from his vision.

For Kai, he’s most likely be affiliated with farming or arboriculture ( cultivation, management and study of plants). His canon occupation as a Landscape Gardener/Arborist is a great reference for this.

This explains why I see him having Dendro vision. His studies and job with plants makes him a strong and formidable enemy. It’s true that fire beats nature, however in Kai’s case, he can fight alongside Kuroo and summon a poisonous plant and Kuroo burns the plant to create poisonous smoke that has one sided effects. Smart.

Since he has knowledge on plants, I see him being a healer as well.

If he’s alone tho, it can go two ways. If he wields a sword, the blade is strong enough to chop a tree off. The blade inflicts poison or any chemicals when it touched the grassy land or just the trunk of a tree. However if he wields a bow, like Sugawara, the tip of his arrow would be poisonous but instead of just his arrow tip, his whole arrow are poisonous.

Yaku.. He’s a little bit tricky. In the canon time skip , He proceed to be a pro volleyball player, so maybe he’ll be like a popular and fair merchant that goes out to deal with business?

In regards to his personality for his vision, he is naggy and motherly. When he snaps, his thunder claps.

He can be a healer for both elements. However, he’ll be like Barbara. More of a support or a sub DPS.

I envision him to have skills like Jean where the more he attacks, the more healing he would bring.

If he has electro vision, his fighting style would be like of Keqing. But if he has hydro vision, then he will be more to Xingqiu.

But anyway, he’s definitely a sword wielder. To him, fighting with a sword is somewhat traditional and an honour. Especially if he gets his hands on an ancient sword.

note: aye i told u i’m gonna make one for kuroo ^3^ also, sorry it’s kinda a self indulgent piece gjksnf im trying to motivate myself to study for my last test 🥲

as harsh as it sounds, it’s an unspoken rule among medical professionals to never get too attached to a patient. you are expected to act professional, to never let your emotions get the best of you.

but sometimes, having spent most of your time in the clinic, treating them, feeding them, walking them, and watching them make progress, you can’t help but have a connection with them.

it was exactly 3 months ago when margaux, a six month old rottweiler, was first brought to your clinic. her owner explained how she would defecate frequently, with blood in her stool. she explained how margaux would vomit every once in a while and how her energy drops in an instant.

then there it was, the results of your diagnosis. ‘positive’ for parvovirus. your heart slightly stopped, feeling weighed down knowing that this virus was no joke. Knowing that parvo if untreated early, if not incurable, would be very difficult to deal with.

After explaining your findings, they agreed to admit margaux so that you could keep an eye on her at all times. Thus, your friendship with margaux started.

She was a sweet girl, she would wag her tail every time you pick up her leash, her eyes will slightly lighten at the smell of her food, and how cute she looks when nibbling on hirugami’s slipper. Though, as time passes by, all her quirkiness seem to fade, like a light that short circuited, a candle blown out. You knew what was coming but you weren’t ready to accept that.

“If you could just sign here.” you slip a piece of paper to your client. a waiver stating you’ve done everything you could and leaves you with no other option but to ‘put them to sleep’.

you watch as margaux’s owner sniffles as she begins to scribble her initials. you close your eyes shut, stopping the tears that were attempting to escape. being in the veterinary medicine field for almost 3 years now, things like this should be normal for you. but you can never get used to this. never get used to telling owners horrible news. never get used to be the one to administrate the euthanization process.

“okay. I’ll be giving you some privacy.” you stroked margaux’s head for the last time and stood up to exit the room. Nothing but sobs broke out from behind you, margaux’s family saying their final farewells.

as soon as margaux’s family left, you excused yourself out of the clinic. you didn’t want anyone to see you.

hot tears cascade the moment you stepped into the outdoors. you felt your hand tremble as your knees begin to weaken. crouching down, you bury your head into your knees, letting all your pent up frustrations go as you broke out into sobs.

“y/n?” a soft voice called your name, followed by the shuffling of their foot steps. you lift your head to see Kuroo rush his way toward you.

“Tetsu…” you looked at him with swollen eyes and your cheeks red. He dropped his bag beside him and crouched in front of you. he wiped your tears with his thumb, taking a good look at you. “what happened?” his voice, calm and full of concern. “margaux…margaux’s gone…” tears began falling again as he pulled you close to his chest.

“I got you, kitten. everything’s gonna be alright.” he cooed as he brushes your hair with his free hand. the both of you stayed there for the next few minutes. his arms securely wrapping around you, his chin rested on the top of your head.

“what are you doing here so early?” you softly said in between sniffles. “hirugami texted me. he told me my baby left with another man!” he exclaimed putting his hand dramatically on his forehead.

you knew what he was doing. he was trying to lighten you up. “you’re crazy, tetsu.” you couldn’t help but smile at him.

he kissed your forehead before releasing you to look at him. “is there anything i could do to make you feel better?” his eyes softening at you. “yes…” you mumble.

“what, princess? i’d do anything for you.” he sounded serious but endearing at the same time.

“anything?” you looked up at him. he nods his head in response.

“could we get a puppy?” your eyes sparkling slightly.

“we could get as many puppies as you want.” he laughed before standing up, extending his hand to you. “let’s go to the pet store, yeah?”

you took his hand and patted the dirt off of yourself.

you got on your tippy toes and pecked his lips. you feel his mouth form a smile. he leaned in again, pulling you close, before kissing you under the moonlight.

and yes, you did get a puppy. just one though 😐

note again: hope you liked it ! im also practicing my writing since i find it quite difficult for me to express my visions/thoughts into descriptive words gjsbjfjd if u reached this far, thank you ily 💓