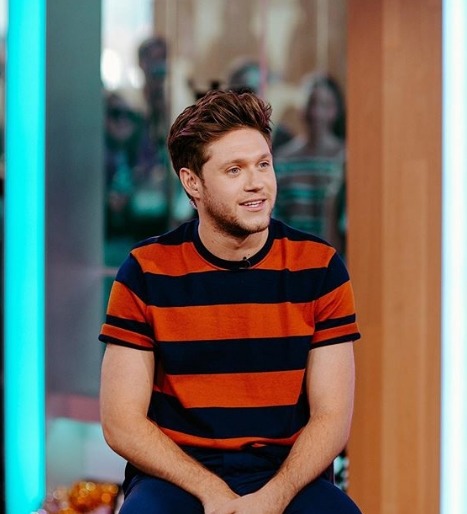 They’re human beings too, you can’t expect them to be perfect, inspiring leaders 24/7 just like you don’t expect that of every single one of your family members or friends.

Yes, they have platforms and followings and they could be using this time to spread information and whatever, but so what if they’re not? Who fucking cares?????? Stop idolizing them just because they’re hot and start following people who ARE speaking out.

Learn how to think for yourselves you fucking sheep

I’ve said it before and I will say it again. The man has 2-one vagina fleshlight and one mouth fleshlight.

I’ve been home for 2 months so lemme do it hy weeks.

Week 4- calms himself. Doesn’t call the exes. Can’t text someone new because they might have ‘Rona. He starts doing more stuff with us like he’s getting to the peak on interactive with us. He contemplates getting a sex doll.

That’s when he feels the voyeur bug.

Week 5- he tries to discreetly touch himself while on the live in between playing music. He’s nervous as hell and stops constantly because he thinks we can see.

When he gets off the live, he’ll have a hard on to take care of, it takes a while and by then he has to go exxxtra hard to get rid of it. He just wants it gone because it’s painful.

That was one occasion in week 5.

The rest of the week he spends finding the balance between too much teasing and not enough.

He gets it by the 3rd time that week.

He’s on the live giving us his show, below the waist he’s rubbing his knees,touching his thighs and dragging his nails up his inner thighs. He’s using a single finger to touch himself, he’s trying to forget it’s him touching him so he’s applying a daintyness to it to convince himself it’s a girl.

He really has fun with his fleshlight then.

He is constantly hovering over the add to cart button. He’s already bought baking supplies, why not?

“Yeah look at you, so wet for me cock huh? You like that Mia? You like my Irishcock? Yeah you do. And Angela White, you like my mouth huh?”

The video is playing against the pillows in front of him and he’s eating pussy and watching girls scissor eachother. “Want me to fuck you huh? Get my hard penis in there? Lemme add my dick to this fuck buffet”

He has contemplated using a finger on himself but nah.

He regrets not jerking off in the bushes when he used to go for a run.

Week 7: he’s over the moon to be getting back some freedom. But no one nighters so far. He wants to really use his toys. He likes how soft the silicone is and he fell asleep one night, making out with the mouth fleshlight. That got him so hard,but he was tired so he passed out.

Woke up about an hour later ,flat on his back in bed, one leg hanging off the edge and his cock hard in the air. He felt around for the mouth and began to play again.

He often falls asleep with the doll and wakes up around 1am with a boner. He’s a fucking necro then.

“Baby? You awake? No…baby I’m hot and hard and I wanna just take a peak…I promise no cocks till you wake up. Yeah? But to be fair lemme rut against your ass…juicy fucking ass.”

He’ll eat the doll out to get it nice and wet to receive his cock.

He fucks the doll in the bathroom, on the balcony, in the kitchen, in his car,If he’s just talking to us on a live, he’s cock warming with the doll out of frame.

A few times he got the doll dresses in one of his tshirts just to cuddle with. Ofc it turned into sex but wow mans really loves a cuddle though.

He’ll lay on the tummy and stroke his hair and pretend it’s somebody else touching him.

He has a major lactating kink and would watch Netflix and suck on the dolls nipples, nipping at them.

Week 8: everywhere is opening back up. He gets to go golfing and it’s been so long at home with y/n, yes he’s named his doll, that he misses you it’s a bit weird and he accepts that. The unhealthy obsession needs to end, but at his pace.

#niall horan, #I adore you, #I think about you often, #But holy fuck shut tf up and go read some leftist literature
0 notes · See All
rhcpnffText

If youre planing on joining the protest only bc Niall said hes gonna be there,,,, yall better stay the fuck at home

#its not a free meet and greet, #its good he didnt say at which one hes gonna be, #niall horan, #1d
6 notes · See All
apureniallsourcePhoto 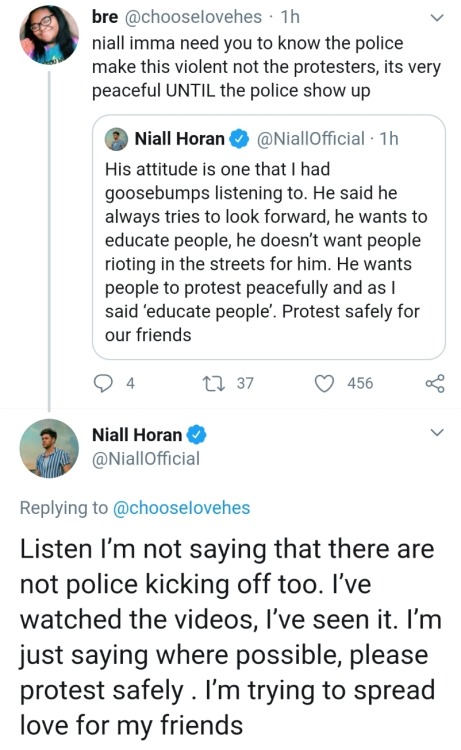 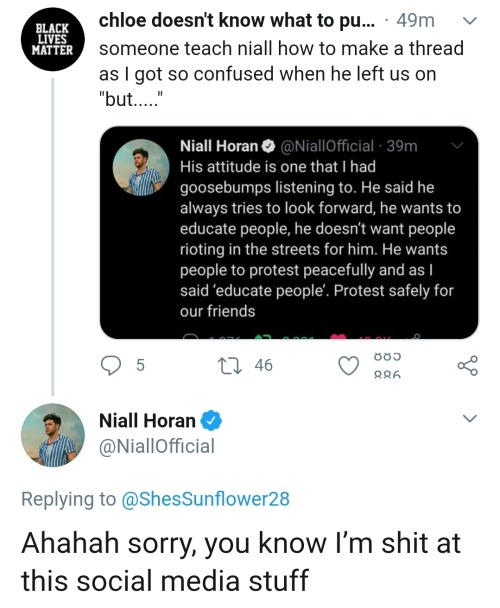 But I’m not ready to move onto the next stage of my life. Not really without you.

#niall horan, #you and me, #personal stuff
0 notes · See All
1dsoftpicsText

“Small Talk” by Niall Horan, off of his sophomore album, Heartbreak Weather, deserves to be a single and respected for the sexy bop it is.

#niall horan, #heartbreak weather, #small talk, #no judgemet, #nice to meet ya, #put a little love on me, #one direction, #irish sunshine
5 notes · See All
louveontourAnswer

I understand your anger and frustration and I agree to a certain degree and no offense, anon, but what am I supposed to do? Call Niall up and tell him some random person on the internet isn’t agreeing with him? I agree that he could do more (everyone can always do more, there is no doubt about that) but he shared the list of links like people asked him to, he said he’ll attend the protest in London (and I hope that fans don’t turn this into a M&G and that he’ll be safe), I’m sure he donated to various causes himself and he is amplifying the voice of a black man, he’s listening. He shared his thoughts on the situation and didn’t stay quiet or just posted one link or picture and he keeps the conversation on the matter going (and no that’s not enough but it’s a start). At the end of the day I can only say this: don’t have high expectations of celebrities and don’t care only about what they do or say; don’t wait for them to tweet something, take matters into your own hand, educate yourself and don’t just repost hashtags. And lastly, it’s not my place to judge his words and actions; yes I would like to see more involvement obviously, from all of them, but this is just the beginning and I don’t want to praise them for doing the bare minimum but it’s good that they “at least” shared the links to the various donations and ways to help and I hope they’re using their free time to educate themselves and keep sharing information on their platforms.

#answered, #niall horan, #drama, #i hope i answered this in a somewhat understandable way, #it is not my place to decide if they're 'doing enough' and obviously they could always do more, #but no matter what they do someone will always complain that they didnt do this or that, #if you disagree with Niall's actions tell him and not me who can't do anything
0 notes · See All
dailyniallnewsText
#niall horan, #twitter, #02jun20
234 notes · See All
editskissyText

all icons and headers are made/edited by me 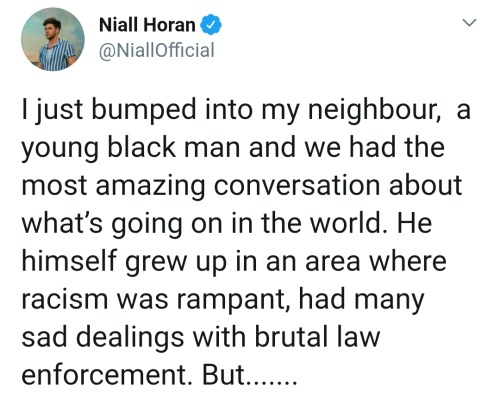 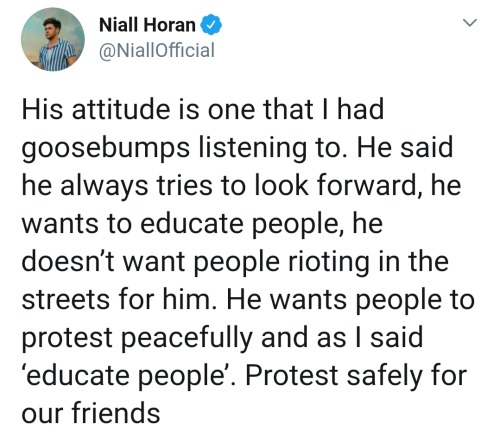 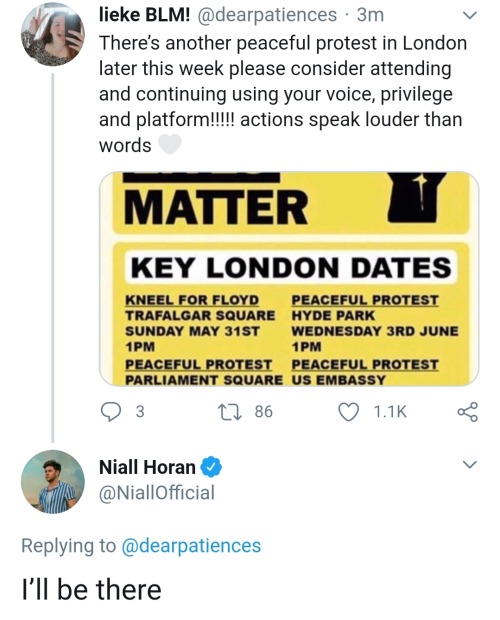 He put on the headphones and turned on the laptop by immediately pressing the YouTube badge. He swiped his finger to enter the name of the song he wanted to listen to. His fingers trembled tremendously when he clicked on the keys. When finished, he hit Enter and several videos popped out. He chose the first one displayed, and after a moment familiar notes sounded in his ears. History. One Direction. Listening to every word on his cheeks tears run down every now and then. Why is he doing this to himself? After all, the meaning of the day hurts enough.

But … He is happy now. Happy, yes. I need it. He doesn’t need to live by fooling around with four boys and cracked eardrums from the squeals of a million fans. Because it matters, because Zayn Malik is free and happy.

But now when the song ends, a certain stage of his life also ends.

This is not the end

We can live forever