Nie Mingjue: I can’t see the top of my head

Jin Guangyao: Nobody can see the top of your head except God!

#untamed fall fest, #the untamed, #nie mingjue, #jin guangyao, #lan xichen, #mei.gif, #only *mumbles* 2.5weeks late, #jgy's remix is....one of my favorite tracks ngl but absolutely devastated about my good sir mingjue (and lxc who gets to live with it all), #long post, #flashing cw, #taking a little break from the tumble tomorrow, #hope you all have a great day <3, #tomorrow today that is lol!
179 notes · See All
misekingVideo

ah shit, here we go again. another “animatic” made by me but this time featuring lan xichen and jin guangyao!

#xiyao, #lan xichen, #jin guangyao, #mdzs, #the untamed, #mo dao zu shi, #chen qing ling, #cql, #lan huan, #meng yao, #nie mingjue, #my art, #PLS SHOW UP IN THE TAGS..... i can't post the video directly since the file is too big angrfjna, #yes i did another one of these. NO i don't know why i put myself thru that again, #i'm proud of it tho! it's the product of nearly four months, #and my back hurts like hell so pls. pls appreciate it-, #limited edition post
18 notes · See All
yatojaegerLink
Room Enough For Two | Chapter Onehttps://archiveofourown.org/works/27254659

Wei Ying scowls at the man standing across from him. “What do you mean the contracts are the same?” he demands.

“It would appear the agent has made an error,” the man says, and Wei Ying blinks. An error? “We have both signed the same agreement, renting the same property as individual tenants.” A sigh. “This should not have happened.”

“Well yea, of course it fucking shouldn’t have,” Wei Ying mutters. “What do you want me to do about that?”

“I wouldn’t imagine there is much you can do,” the man says, tone snide and cutting. Wei Ying stands his ground, meets it head on. “My contract was signed first, which means that yours is void. I am able to pay the combined rent, and I have no need for a roommate. You will have to find somewhere else to stay.”

Wei Ying will see about that.

Or: The one where Wei Ying and Lan Zhan accidentally rent the same property, some things are said, an agreement is reached, and they both get more than they bargained for.

POV: You’re about to know the colours birds can see

A little sketchy, but still good 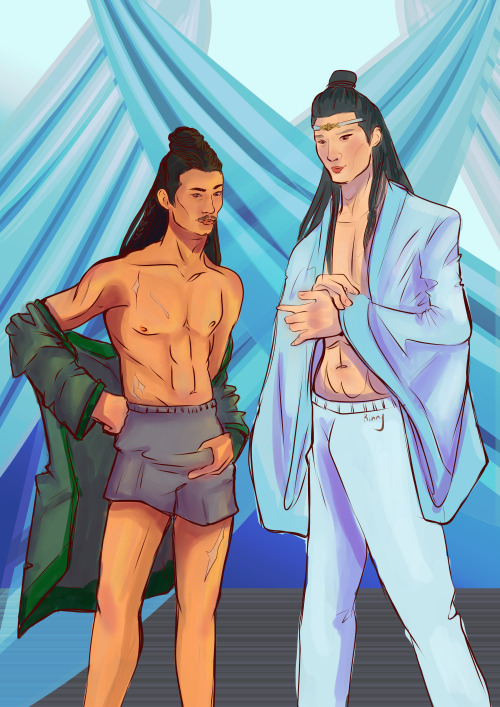 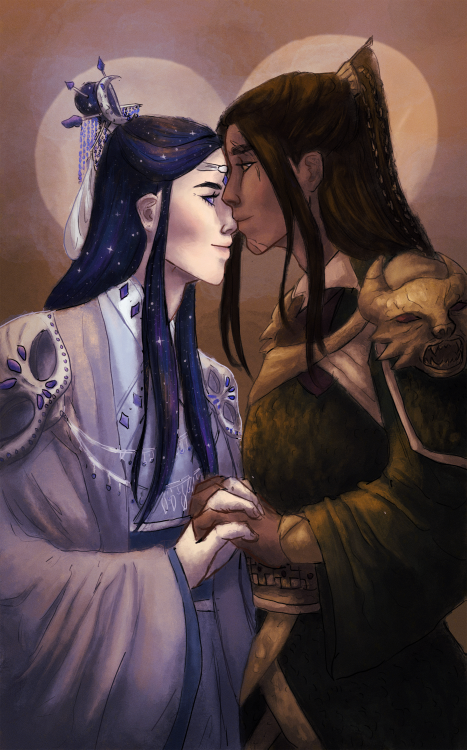 #nielan, #nie mingjue, #lan xichen, #mdzs, #mo dao zu shi, #my art, #i painted most of this with a fresco brush and i was so ready to be done with it hdfkhskjfsdhflds
42 notes · See All
the-untamed-chiliText

cant believe i watched this sad and gay little show. fifty episodes. 50 episodes. AND FOR WHAT?

now i scroll through tumblr and twitter, check the mingcheng tag three times a day, cry about wangxian and their soft little turnip kid, then smile when i see nie huaisang, then cry when i see jiang cheng. like wtf?? i did not sign up for all of these feeings and emotions im now having constantly. like…???? I DO NOT KNOW HOW TO DEAL WITH ALL OF THAT!!

and dont even get me started on lan xichen, certified Himbo and obvlivious idiot. like dude. let me hug you and then smack the back of your head, you have a fucking braincell, fucking use it!!!

and no i wont ever be talking about nie mingjue, everyones da-ge in public because i will break down and cry and then we will all be very embarrassed.

before i leave this mess here, proud to say purple has now moved up the list of my fave colors.

for the about 8 million people in the tags and notes of this post saying that jiang cheng was Actually referring to nie mingjue and/or jin zixuan, instead of lan xichen - Using Context Clues, which I learned how to do in goddamn middle school, I concluded that he was talking about lan xichen, due to the fact that, as he says, “sect leader jin, isn’t being your shixiong even harder?” (episode 47, aprox. minute 34:05), and in the moments following, he looks directly as lan xichen, who turns away, looking uncomfortable/horrified. he could have also been implying nie mingjue, but my initial statement is not incorrect

as for jin zixuan, I don’t speak chinese so obviously I’m not the authority on this, and correct me if I’m wrong here, but if you took about five seconds on a search engine of your choice, you would find many chinese languages websites telling you that ‘shixiong’ refers to a martial elder brother, not a familial one, and considering the fact that jin guangyao and jin zixuan are related to each other by blood via their father, jin guangshan, jiang cheng could not have been referring to jin zixuan

#this may seem like a bit of an overreaction on my part but like. half of the tags on this post are all WELL ACTUALLY-, #and I am so tired. shut the fuck up man., #I didn't want to comment on the post and ruin my fun joak so. here we are, #the untamed, #mdzs, #jiang cheng, #jin guangyao, #nie mingjue, #lan xichen, #jin zixuan, #jin guangshan, #ghost posts, #text
24 notes · See All
ydotomePhoto

also just… little huaisang probably looked up to his brother so much 🥺 his big brother who is always there for him and is so kind and soft and sweet and full of love but also so big and strong and most of all safe.

can we talk abt soft nie brother dynamics 🥺

#like nmj softest brother for his didi change my mind, #nie mingjue
66 notes · See All
theuntamed-magicAnswer

ohhhh an excellent but triiiiiicky question!!

I cannot give the details of the working, I’m kinda banned from leaking such knowledge, but I can tell that it will be a different working for Nie Mingjue and for Xiao Xingchen.

I - personally - would invent a special sort of Talisman to assist the process, which could help to change the time it will need to mend both souls.

Both will need some time though, maybe a few hundred to a few thousand years? To eventually get to a point where they could reincarnate again?

On a spoiler alert note, I will have Xiao Xingchen in my work ‘Because you loved me’ and will - upon his appearance - explain what had happened to have him reincarnated and being well. So mhhhh, maybe that will help answer this question more than what I wrote now?
It’ll be a chapter in the future (and probably one I won’t upload in the next few weeks), so it’ll be a while ><

“We can discuss it more tomorrow,” Huaisang said. “But you should know.”

“As long as you’re aware that you’re washing the dishes,” Mingjue said.

Huaisang nodded. “I have ideas.”

“I’m sure you do,” Mingjue said. “Have them while you do the dishes.”

Huaisang knew he should whine or pout or something, but he couldn’t bring himself to do any of that. “Just… take care. San-ge knows things he’s not sharing.”

Mingjue looked to Wanyin, then back to Huaisang. “Dishes.”

“So mean,” Huaisang said with a pout.

“Wanyin stays here with me,” Mingjue said, pinning Wanyin with a severe look.

in which LXC babysits NHS because I have no self control

“I can help you study,” Lan Xichen offered, voice just as pretty as he was, “I understand not everyone can learn by reading.”

“I learn just fine,” Da-ge said, but even he couldn’t keep his angry voice around Lan Xichen. Nie Huaisang couldn’t stop staring at him. Nothing in the Unclean Realm was like him; he was a character in a storybook who was the definition of elegance.

“I don’t mean to insult you, Nie Mingjue,” he said, “One future sect leader to another, I think we need to work together if we want to be better than our predecessors, don’t you? Especially if it means surviving the elder sect leaders we’ll inevitably have to work with.”

Da-ge let out a slow breath and looked to the side for a moment. Lan Xichen never once looked bothered. He was all patience. Nie Huaisang studied his face anyway, the smile that gave away nothing. Every single time he saw him, he had that smile. Nie Huaisang tucked it in the back of his mind for later.

“It isn’t that I can’t study, it’s that I can’t focus with my secret weapon,” Da-ge said, lifting his arm and lifting Nie Huaisang off the ground with ease. He giggled quietly and smiled at his brother. Lan Xichen’s expression changed just enough to show his complete fondness.

“Ah, I’d say he could play with A-Zhan, but A-Zhan doesn’t really play,” he said, crouching down just a little to get on eye level with Nie Huaisang, “But you’re in luck because I do.”

I FINALLY watched Fatal Journey and it was actually really good! I’ve read some less than great reviews so I was hesitant but it was lots of fun. I liked the cg and cheesy tomb set. They really set the mood.

Most importantly it also made me FEEL SOME FEELINGS FOR THE NIE BROS … like I was right there with Huaisang mentally yelling DA-GE!!!! too.

Previously I’d been somewhat neutral towards them. Even after 2 reads of the novel and 2 watches of CQL I still questioned if Huaisang’s revenge had gone too far. (Esp towards LXC) After watching I’m like OH! OHHH! I SEE!! WELP. MAYBE LXC DESERVED IT. Annnd maybe I’m mad at JGY now too a little. Bc like Mingjue was SUCH A GOOD GUY!!! Damn it!! He deserved better. AND he had a cool stand that we were totally deprived of in CQL.

Anyway. 10/10 would recommend. Now excuse me while my villain apologist self rides out the existential crisis these new feelings are giving me.

#fatal journey, #nie huaisang, #nie mingjue, #cql, #i forgave jgy all his sins, #but maybe i was too hasty????, #lol, #im having a crisis
13 notes · See All
artistarticlesLink
Little Sister Nie - BethBell - 陈情令 | The Untamed (TV) [Archive of Our Own]https://archiveofourown.org/works/23438866

Chapters: 44/?
Fandom: 陈情令 | The Untamed (TV)
Rating: Explicit
Warnings: Graphic Depictions Of Violence, Underage
Relationships: Lán Zhàn | Lán Wàngjī/Wèi Yīng | Wèi Wúxiàn, Lán Huàn | Lán Xīchén/Niè Míngjué, Sòng Lán | Sòng Zǐchēn/Xiǎo Xīngchén
Additional Tags: Wei Ying is female, And LanZhan loves her because he always does, Huaisang and Wei Ying get into alot of trouble, But Nie Mingjue believes his childes can do no wrong, XiChen has fun laughing… a lot, But he loves his boo, Mostly I had fun laughing while writing this, I Hope You Laugh Too, Female Wèi Yīng
Summary:

Wei Ying saves Nie Huaisang and finds herself somehow a member of the Nie Sect.

Or how Nie Mingjue gains a little sister and the headache his two scheming “siblings” get into. Oh and XiChen is along for the hilarity of it all watching LanZhan despair after Wei Ying with hearts in his eyes while Nie Mingjue actively pushes him away from his precious little one. Because Wei Ying is precious.

Oh and she is a she because I have fun writing gender bend fics….

I had to share this important message with y'all.

#nie mingjue, #the untamed, #mei.gif, #i just thought he looked nice as hell (which is what i think all the time but yknow...), #vast recolor on this one, #curious if it will translate well to mobile or not, #probably heavily dependent on blue light filter being enable or not, #*thinky face*
382 notes · See All
Next Page