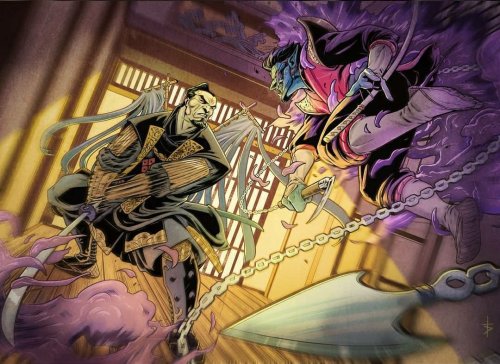 Enjoy and thank you for your support!

“Thank you so much for coming on short notice.” Laura shouts from the kitchen as you and the two god brothers enter the Barton farmhouse. “With my sister falling ill so suddenly, we couldn’t find anyone else to watch the kids.”

“And trust us if we could, we would.” Clint interrupts lugging two duffle bags over his shoulders.

“We can leave if you prefer.” Loki blurts out as Thor looks aimlessly around the room.

“Where are the little soldiers anyhow?!” Thor asks in a bellowing voice.

“Thor!” Lila and Cooper run down the stairs and launch into Thor’s arms, one sitting effortlessly each bicep.

Loki moves away to grab a seat as you are pulled away from the mummers by Laura. You coo at Nathaniel as Laura places him in your arms, “Thank you so much, Y/N. I wish we could bring them- I love them- but they aren’t the quietest bunch and right now my siter needs as much quiet as she an get.”

“It’s no problem at all,” You start, “I’m just sorry I couldn’t come alone. I’ve got god detail while the other avengers are out.”

“Oh, don’t listen to Clint, the kids love Thor and maybe this will be a good time to teach Loki some patience.”

You both pause and look at Loki who is sitting on the sofa, finger digging into his temple from all the screaming. 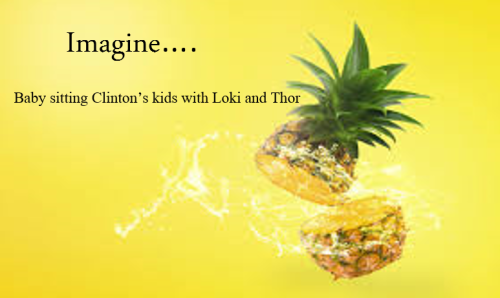 So this is my first fanfic ever. English is not my first language but I am trying, I do have a second part to this so I’ll eventually post it. Hope it’s well liked? Non of the gifs or pics belong to me btw.

(Y/N) was a Goner. In only been here for a short amount of time and yet she where already swooning. That pretty cute guy with a adorable fanged smile, Bright golden eyes and the most beautiful complexion of blue. Kurt Wagner. Aka Nightcrawler, the adorable X-Men that had stolen her heart in days with his shy smile and adorable ways. (Y/N) could just imagine herself in his arms all day and just staring at his smile.

She grumbled as she stared down at the most recent sketch of the Mutant. It was a simple sketch, One she had done rather quickly of Kurt when he was in her perch like position and tail swaying behind him. (Y/N) always thought he looked bad ass like this.

(Y/N) stared at the small picture and sighed softly. ‘Why would he, A X-Men of all people even glance your way? You don’t have a cool mutation. You aren’t some model… You’re… Just you’ She thought softly before sighing in utter defeat. Just picking up her pencil to continue her art.

Once finished with her sketch and some light shading she scribbled down a fast and small little 'Love letter’ next to the sketch. Pouring her little heart out through the words before smiling proudly, she had done this with all the little pictures of Kurt she drew… yes there where quite a few in this sketchbook alone. Making a small little poem, Note, Letter or whatever else next to the sketch. Almost like she was able to speak to him through these words.

Satisfied she set the book to her left to grab her bag. In a matter of seconds there was a small gust of wind and when she turned to grab her book…. It was Gone…

Kurt was in Love.

He tried so much to hide his feelings and try to psych himself out of it, But it was far too late for that.

In the short few weeks that (Y/N) had arrived she had already stolen his heart, Without even having to say a single word. Her simple smiles and pleasant waves was all that was needed for his knees to feel week, That kind look in her (Y/C) eyes was all it took in that moment for him to fall under her spell and his heart skip.

“Wow, You got it bad don’t ya?” Peter said with a snicker as he watched his blue friend pout from the lunchroom table as he stared out the nearest window where (Y/N) was sitting sketching in her book. Kurt groaned softly as he placed his face down on the table, Ignoring the snickers of his friends next to him, Jubilee rubbing his back as a small act of comfort.

“You should just go talk to her. She seems really nice” Jean said softly as she leaned against Scott who was smirking as his miserable Friend. “Yeah. I haven’t seen anyone talk to her yet so I imagine it will be welcomed”

Kurt just shook his head softly from his position “Nein…I don’t know her, I vill chust scare her avay”

Kurt said softly. His spade tipped tail droping as he sulked and didn’t look up from his face full of table. The small group sighed at this as they wanted to cheer up their friend. Peter stood up however rather Quietly which was unusual from him. He grabbed a hand full of chips shoving them in his mouth and slid down his goggles

The Silver haired speedster said with a grin before zipping away. Kurt instantly Pulling his head up as he heard this and having a bad feeling. In a matter of a few seconds Peter had returned holding up a well used sketchbook with a grin on his face, Kurt’s golden eyes went wide as he instantly recognized what that was.

Peter smiled as he pulled up his goggles with a grin.

“Yes it is Devil Dude. Now, Let’s see what she really likes!”

Peter said as he opened the book. The rest of the group now fully catching on to what Peter was holding in his hand.

“That’s so Uncool!” Jubilee protest as she shot up to grab the Sketchbook. Knowing that with any girl there was some things that were written that was never ment to be read! Jean also got up to take the book as Well “Peter stop it!” Scott staying oddly silent in all this as he saw the reactions of the girls (He looked through Jeans journal before-)

This seemed to only to strengthen the Speedsters resolve as he started to flick through the book at lightning speed. Kurt also now on edge as this felt wrong.

“Zis isn’t right” Kurt said Quickly as he went to snatch the book.

“She likes you!” Peter announced loudly, It was suddenly like a shift Kurt was suddenly next to Peter looking over his shoulders with wide eyes. He stared back at a well done picture of himself, Sitting around with a wide smile on his face like he’d been laughing, A small poem on the side of the drawing. Kurt’s cheeks and tips of his ears started to turn lavender as Peter flicked through the many well done pictures of him and the sweet words that went with them.

Kurt was quiet as he stared at the pictures. Blushing more and more as his tail swayed side to side happily like a puppy. Jubilee stepped in and ripped the book from Peter’s hands. “Alright that’s enough Creeps! I’m gonna return this to (Y/N) before she-” “Vait! I…I can give it back to her” Kurt said, Being surprised by his own sudden boldest for a moment. There where a few raised eyebrows at this before Peter grinned, Jean also looking Hesitant but Scott just smiled. All of them agreeing to this as Jubilee handed the Blue mutant the book who quickly Bamf'ed away.

However he didn’t go to where he had last seen (Y/N) instead he appeared in his bedroom. Holding the sketchbook close to his chest before rushing over to his little desk and grabbing an empty spiral notebook and getting to work. 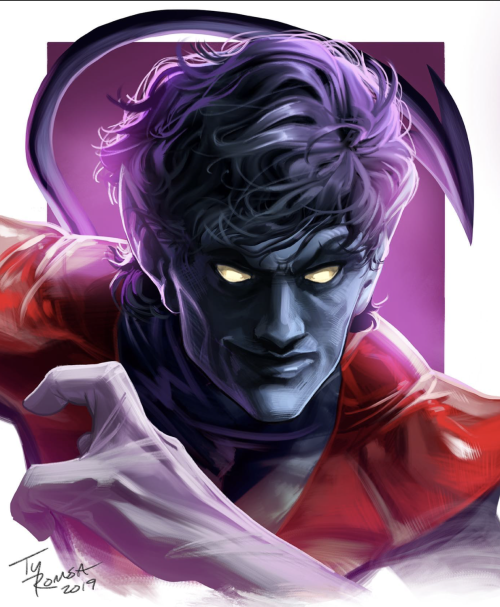 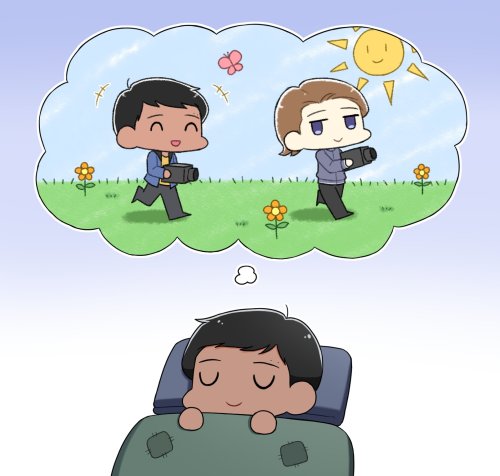 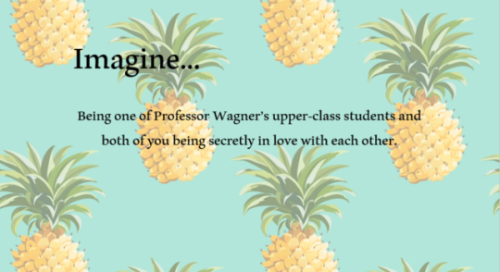 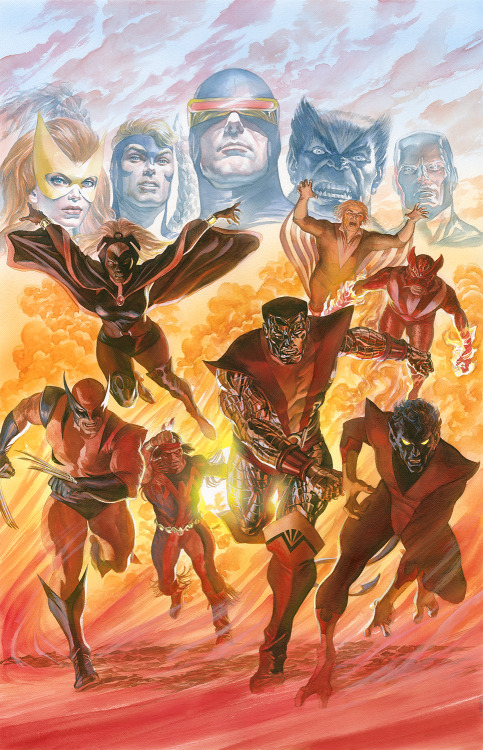 💛 I was at the local thrift-store and found these! 💙

They’re all in good conditions and i just spent 4 euro for them all.

Pushing forward in my attempts to improve at drawing men, here’s Kurt Wagner, known in the Munich Circus as the Amazing Nightcrawler. 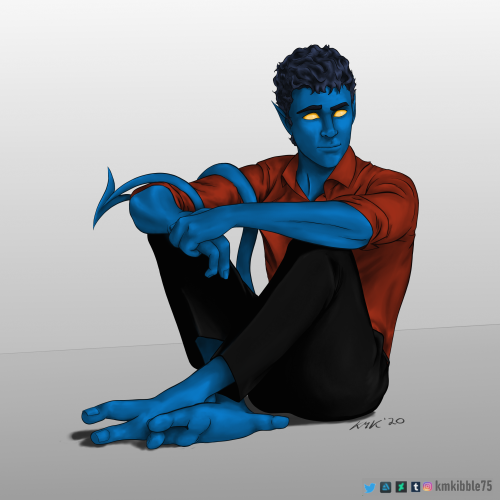 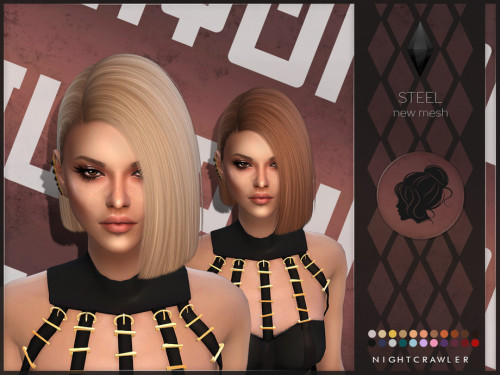 Because whenever I come on here and don’t get my fill of Nightcrawler and Excalibur and all that, I make my own.  Classic (to me) cover poses, beginning with issue # 1 below.

i reread the 1985 Nightcrawler solo the other day so i did a little panel redraw! (without looking at the actual panel)

Peter: Not you, Kurt. You’re an angel and we’re thrilled that you’re here. 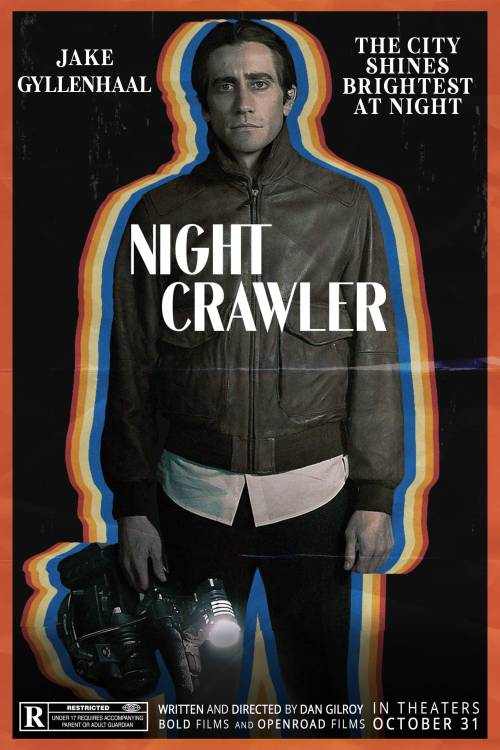 I don’t often go for nighttime nature walks. Mostly because I tend to think about how many “nightcrawlers” are out there. They must be keenly aware of me, but I have no idea they’re there, peering through the gloom 👀 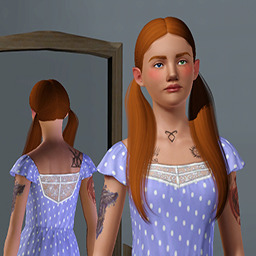 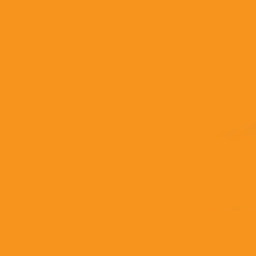