The coronavirus shutdowns are giving scientists an opportunity they never thought they would have: to see what would happen to the planet if the world’s economy went on hiatus.

The result has been drops in air pollutants to levels not seen in at least 70 years, easier breathing for people with respiratory ailments and consistently clear views of landmarks often obscured by smog, such as the Hollywood sign in Los Angeles and the Manhattan skyline.

“There have been some interesting pseudo-experiments, like when Beijing closed its plants for the [2008 Summer] Olympics, but only for a few days,” said Melissa Lunden, chief scientist for Aclima, a San Francisco company that measures pollution with street-level sensors. “Now, everyone on the planet can see the changes.”

The reasons, experts say, is that factories have shut down, and people who can’t go to the office, church or restaurants have stopped driving. Vehicle traffic in Los Angeles and New York has plunged about 90% from levels in January 2020, according to data analytics firm StreetLight Data Inc.

One of the biggest airborne pollutants to fall off has been nitrogen dioxide, which is a byproduct of fossil-fuel emissions that most scientists believe is contributing to climate change. Satellite data from the National Aeronautics and Space Administration show NO2 levels in the Northeastern U.S. dropped 30% during March from the previous four-year average for the month.

San Francisco-based Aclima has compiled data that shows the NO2 readings dropping in lockstep as the coronavirus swept first from China in January to Europe in February and the U.S. in March. Scientists said it was the first time they could remember so many cities going clean all at once. 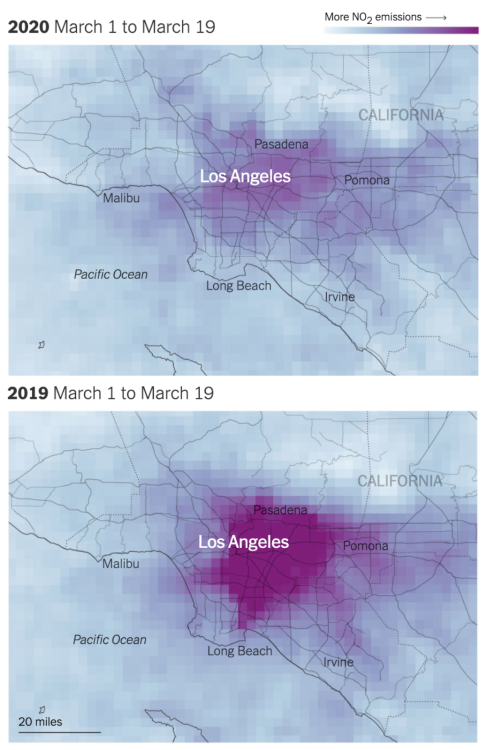 An indirect implication is that if we REALLY REALLY REALLY wanted to curtail climate change and pollution, we certainly could. It’s largely a matter of will.