Here is a commission I worked on for @returnofthewhack based on one of their text posts!! I had a really fun time drawing this :))

Happy New Year! We have the first part of the IgNoct Exchange to share. You can also find the entire collection here.

As always, reminder to mind the tags! We have only listed title, author, and summary.

In and of Itself by SerAnneliese

One wound is tended but a thousand words are left unsaid.

Rewrite the Stars by amitiel

It’s been a year since Noctis defeated Ardyn. Now that they have worked hard to restore much of Eos, the one thing Ignis and Noctis haven’t had time to work on is their relationship.

Ignis decides it’s time for a break for the two of them. While Gladio and Prompto take care of the throne for them, Ignis takes Noctis to Galdin Quay for a weekend getaway… and to rekindle the love had never been lost between them.

A Life for a Life by blackstyx

Dark hair moves softly, mingling with the white fur, when Noctis shakes his head no. “I shouldn’t be alive.”

Ignis inhales sharply. The prophecy. A fate they all fought successfully and their price sat now in front of him. Uncertain and scared.

“I know he is looking for me. So I hide here, but I know he will take me eventually.”

The First of Many by Knight of Flames (beetroot_of_doubt)

Noctis has had a major crush on his Advisor for ages but he’s decided now is the time that he’ll so something about it and ask Ignis out. That is, he would if he could just work up the courage and figure out how to. Then when he does, will he be gently rejected, or will this be, as he hopes, the first of many?

Ignis was always meant to guide Noctis, and he would defy fate to see him to the ending that they all deserve.

A New Beginning by LemonCake1328

After so many years, King Noctis can no longer keep silent for all that he always felt for his faithful advisor and friend Ignis. A New Years memory shows him that it is time to break the silence

Ignis gets hurt during a routine hunt. Things change after that.

As It Should Be by Lhugy_for_short

Exactly one year after the Dawn, and with King Noctis set to return from negotiations abroad, nearly everyone in Insomnia is in a festive mood.

Everyone except Ignis, for whom the last three weeks have been a painful reminder of life without Noct close at hand.

Blooming In Blue by ThatScottishShipper

In Altissia, at night, there is said to be a secret walkway where the spirits of the unrequited drift in the waters.

The Chocobros investigate, but Noctis and Ignis are split off from the other two, and have to come to terms with their own feelings.

Before it’s too late.

Breakfast in Bed by memoriesofrain

It’s a quiet morning for Ignis and Noctis and in a surprise turn-of-events, Noctis wakes up first. So he decides he’s going to do something that Ignis always does for him: make him breakfast so Ignis can have breakfast in bed.

With the Winter sun setting in, Ignis loses track of time easily when he gets too wrapped up in work – but lucky for him, Noctis is always eager to call it a day and drag him off to bed.

#ignoct#ignoct fic#ffxv fanfic#ffxv#final fantasy xv#ignis scientia#Noctis Lucis Caelum
8 notes
camsthisky
Text
anytime you need a friend, i'll just be me - CamsthiSky - Final Fantasy XV [Archive of Our Own]
An Archive of Our Own, a project of the Organization for Transformative Works
archiveofourown.org
#camryn writes#my laptop stopped working right as i tried to post this so i get to do it on mobile#ffxv#prompto argentum#noctis lucis caelum
1 notes
fy0ggo
Photo

bet you thought you’d seen the last of me <3 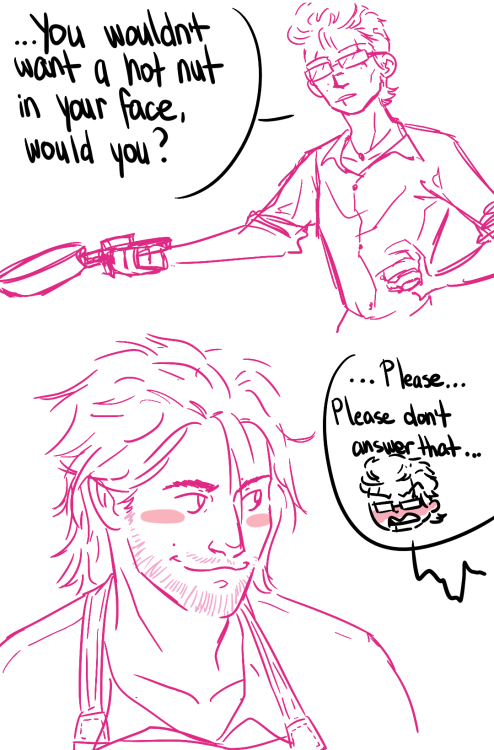 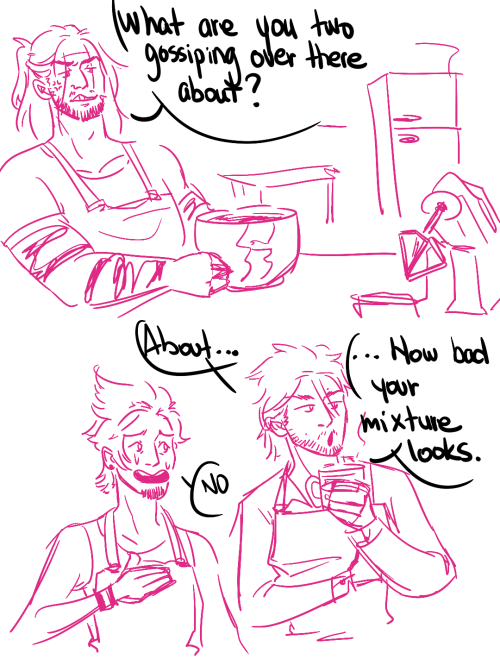 Hi everyone! I finally got it all together so I can sell these adorable stickers I made!

They’ll be on sale for $3 each, $10 for all four (with free shipping in the US!) There’s limited stock so if you’re wanting them act fast!

“Take my hand so you don’t fall flat on your pretty face!” 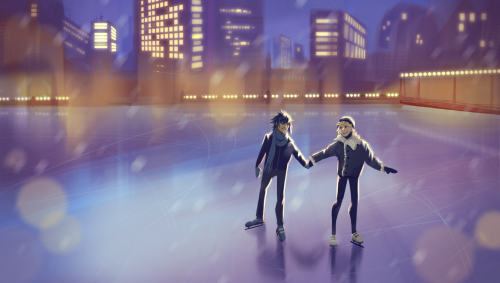 Anonymous asked: Hello, I want to request also a Prompto bc i love him 😍 like his insecurities kicking in and then his s/o will kiss them insecurities away, kissing his cute freckles and adoring his stretch marks (i have them too 🥺) just to get sunshine boi smile again, not too saucy, bye thank you *flies away*

A/N: hello!! thank you so much for your request. I hope you enjoy it!! feedback is always appreciated

I apologize if this is like being spammed for anyone, but Ardyn has an interesting time when he wakes up.

Just kind of amusing myself with, ALL of the Chocobros are kids again. They don’t have the best impulse control and when it comes to sneaking in Prompto, Ignis knew he should have come up with a different solution, but, he just didn’t. He’s only 9 and one of his friends, a seven-year-old, was left at home with no supervision, he can’t let him stay alone.

Gladio is mostly running on anger at Prompto’s parents, he might be planning to try and convince his dad to adopt or take custody of him because honestly, Prompto’s current parents don’t deserve him as a son if they won’t even have someone there to take care of him.

Noctis was just too busy being angry that his best friend had to wake up at home alone, remembering everything, the fall, Niflheim, him being trapped in the crystal, ten years of darkness. He had no one there to give any comfort if he needed it.

Nyx is an Ulric, he was willing to go along with smuggling a child being neglected from the very second there was a chance said kid had no one to look out for him.

#ignis scientia#gladio amicitia#noctis lucis caelum#nyx ulric#prompto argentum#second chance for happiness au#starry thoughts#Nyx is just: Kidnap a neglected kid and sneak him into the citadel? You got it.#Lib is gonna yell at him for helping try to smuggle Prompto into the citadel#Until he learns that Prompto was left completely alone by his parents and#they were gonna be gone for two months#Any Glaives listening in are gonna want to adopt Prompto#He needs people that will care for him obviously
4 notes
followthestars
Text

This isn’t the best, but I had fun writing this part of Second Chance for Happiness.

“We need to get Prompto. Now.” Noctis has a look of pure determination on his face. Ignis and Gladio share a look, realizing that their blond friend doesn’t have any clearance to enter the citadel.

“Highness, there is one problem with that, Prompto has no clearance, we have to run a background check so he can be-“

“Iggy! His parents might not even be home right now! You know they left him alone with he was ten all the time for trips, but he never told us how old he was when they started doing that! It was a fight to even get him to admit he spent a lot of time alone growing up!” The prince’s cheeks are puffed out, something he hadn’t done since… well since he was seven years old the first time.

“Iggy, we can try driving by Prompto’s place, stop in to see how he is if we can.” Gladio is honestly worried now.

“In case you’ve forgotten, none of us are old enough to drive.” Ignis really wants a can of Ebony right now.

“I overheard a couple of glaives mentioning Nyx was acting weird… maybe he got dragged along with us?” The shield sees the small look of hope in Noctis’ face. “Get dressed princess and I’ll go check it out and see if he does remember the future that won’t happen now.”

Once Noctis is ready, he finds Gladio waiting with a slightly rattle Nyx. “He remembers and is willing to drive us where we need to go.”

Well, that’s one problem solved, though the advisor has one more question. “Do you have a car?”

“I do. I can drive you to blondie’s place too. You think he remembers?”

“Shiva made if clear we’d all go back at the same time, so yes.”

Well, now Noctis looks panicked again. “So, he could be dealing with remembering while completely alone! We need to get to him NOW!”

It doesn’t take long for Nyx to take them to his car or start driving. The guards buy the excuse of Noctis throwing a tantrum because he wanted to see a friend he made at school before the background check finished, so the glaive got stuck on guard duty. Said prince pouts the entire way as a result of that excuse.

When they arrive at the house Noctis is out of the car before it’s completely stopped and sprints to the door, ringing the doorbell multiple times. It takes a bit for Prompto to answer, once more a chubby kid. “Noct?”

“Prom! I was worried!” Well, the blond was tackled to the ground in a hug.

“I’m the one that should be worrying!”

Ignis soon makes his way to the doorstep, peering into the house. “I take it your parents are on another business trip?”

Prompto hesitates before nodding. “I think this one they left before I woke up, because I’ve got a note saying they’ll be back in two months.”

“And did they hire a sitter?”

“They never did before.”

Gladio lets out a sigh and just walks in with Nyx. “We’re packing you a bag. I can’t leave you here alone, we can sneak you into the Citadel.”

That plan of Gladio’s did not go as he wanted considering they were caught in just five minutes by Cor, Clarus, and Regis. “Noctis, what exactly are you doing?”

The prince is frozen before acting on first instinct. He clings onto Prompto’s side and speaks with as much confidence as he can. “Mine.”

Cor makes a strangled sound a second later. Seems he recognizes the kid he had saved from Niflheim as a baby.

Today I received my copy of the Beginning of Forever (Older Promptis) zine, and it is absolutely gorgeous!!! I’m so proud to have been part of this beautiful project 💖💖💖

Sales are still open, check @beginning-of-forever for more info on how to get your own!!! 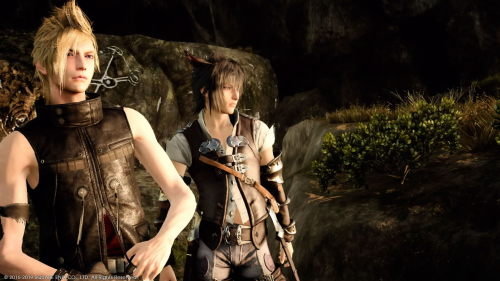 As Heihachi, steamrolling a Noctis so hard they ragequit during the kill combo.

I desperately wanna brush noctis’ hair out of his face. how does that not annoy the hell out of him???

How did a GIF of broody teenage Noct staring over the city while angsting over living up to the expectations being placed on his young shoulders not already exist?!

Well, now it does. And you are WELCOME.

I had another idea during a long drive it starts sad.