A century ago or so, Atlas set out to conquer the world.  Penny was built to be a spy, an infiltrator meant to find weaknesses in Vale’s defenses before the invasion.

She did.  Then she fell in love.  And rebelled against the kingdom that had created her.

I would like to take a moment and remind everyone that this fic is roughly inspired by the Mechanism’s album Once Upon A Time (In Space) and that that narrative’s climax is rather gruesome.  Additionally, this chapter especially was influenced by the Magnus Archives, which is a horror podcast.

Please take those facts into consideration prior to reading.

I would also like to remind you all that there is one more chapter after this one, and thus the fic does not conclude here.

#rwby, #nuts and dolts, #ruby rose, #penny polendina, #grimm!ruby, #rose puppetry, #whirls writing, #if you're thinking the title is a reference, #you'd be right, #😏, #im gonna regret posting this in the middle of the night, #but it also feels like the right time too, #so here we are
3 notes · See All
gaywizardssavechristmasText

if you consider shipping these penny and ruby

chill down , don’t take it seriouly , it a joke that holds to be true

So I do think this is unlikely, given that if Cinder sees Penny she’s likely gonna go full murder and not try and be stealthy.

But does anyone remember that Whiterose fanart comic of Neo with the relic disguised as Ruby, and Weiss sees her, and neo tries flirting and whatever to get out of it? Real cute right? A great comic right? Well what if we get something like that with Penny coming up?

There is a non 0 chance of Neo or Emerald using Ruby to trick Penny somehow and I am both terrified and very excited.

ruby and penny somehow continue to get gayer. amazing

Its me and my gfs 1 month anniversary together today!! So I drew her some nuts and dolts to celebrate

Ik 1 month may not sound alot but as someone who has never been in a relationship before its something really big to me and I never thought I would even get to be in one since I’ve always been seen as the “undatable” one. To know that there’s someone who loves me like that makes me feel so happy, even if there is an ocean separating us😭😭 (the long distance struggle is real aha)

With the permission of @cosmokyrin I used her drawing of Penny triple-wielding swords to make a little representation of what Nuts & Dolts has been feeling like this volume! 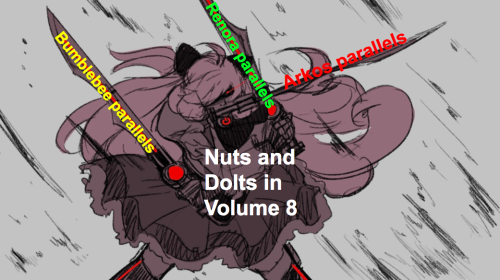 i finally edited my favorite girls! they mean a lot to me

#i was expecting crumbs and yet im fed, #rwby, #erin watches rwby, #nuts and dolts
10 notes · See All
fandomdabblesText

me: it can’t be that gay, surely the shippers are reading too much into it

*sips my ruby and penny supporting each other juice*

Is Nuts and Dolts Canon yet?

#nuts and dolts, #rwby shitpost, #i dont feel comfy putting this in the main tag with the reception to the bee copycat being not so nice
0 notes · See All
catalyswitchPhoto #Morgana Arts, #RWBY, #penny polendina, #ruby rose, #nuts and dolts, #if canon isn't going to give us any more hugs, #I will have to make my own, #AUish I guess?
834 notes · See All
aknolanAnswer

Ooh I like that question. It’s a tough question for sure, but it’s a great question.

It took me a bit to answer because the way I view this show has changed quite a bit over time. Mostly in the sense that I’m starting to trust the writers more and more. Because that’s the kind of story RWBY is, as it goes on I can see just how many things which I hadn’t considered important, were entirely on purpose. On that note, it’s also been a very strange thing to look back on Ruby and Penny’s interactions and wonder “oh, was that on purpose?”

To get back to your question though. If someone had told me a few weeks after volume 7 ended that Ruby would end up in a romantic relationship by the end of the series, I probably would have reached this conclusion: I hope it’s penny, but I expect it’s Jaune.

First of all, I don’t think you were wrong to read Ruby and Penny’s interactions as romantic. I already liked the ship before volume 8 and part of that is that it’s easy to see their interactions through that lens. The fact I never considered canon Nuts and Dolts an option before is because there’s always been an alternative explanation.

And the best friend category can be (and has been, in other shows) used to explain a lot. To the point where writers will have other characters mistake them for a couple but you just know the writers will never consider it as anything other than a ridiculous joke.

And of course, I have more trust in the rwby writers than that, but the interactions between Ruby and Penny never really went beyond what could be (easily) explained as something best friends would do. And that’s not meant to be dismissive either, it’s just that I’ve seen this before. Two female characters who are Best Friends, and by the end of the show the writers have hammered it in again and again and again that they could never be in a romantic relationship.

It’s very hard to consider the possibility that Nuts and Dolts will be an exception to that.

Volume 8 makes it easier. Best friends still works but… it’s a bit harder to be convinced by that. It’s a little easier to see the possibility that they’ll develop this into a romance. I honestly have no clue if the CRWBY will go for it, but volume 8 has led me to believe that they can. If they want to. It seems possible, for once, that they want to.

Before volume 8 though, I considered it a nice idea. If the writers went that route I would have liked it, but actually considering it a possibility? I couldn’t trust them with that, not yet.

So that’s why I would have hoped for Penny, while also completely writing her off as an option.

Why I would have picked Jaune as the most likely option is really just process of elimination. I mean, what are the options even? I’d assume whoever it is would have already been introduced by volume 7. Taking into account that Renora and Bumbleby are both canon, that leaves very few characters for Ruby to end up in a relationship with.

In fact, once you leave out Penny, the only people Ruby’s close with are Weiss, Oscar, and Jaune. I don’t consider Weiss and Oscar options now, and I wouldn’t have before volume 8 either. So all that’s left is Jaune. He’s nice enough, and he’s really grown a lot from where he started. It’s not impossible for him to end up with Ruby. And before volume 8, that would have been enough for Jaune to be my best guess.

I will say though, if we assumed for a moment that f/f ships and f/m ships had no difference in their likelihood of becoming canon? The only time Penny wouldn’t have been my guess, was when she was presumed dead for three volumes.

#rwby, #ruby rose, #penny polendina, #nuts and dolts, #cw homophobia, #warning is there because I talk about the difference in what relationships stand a chance to be canon, #anyways, #this is probably a bigger answer than you expected, #sorry about that, #I've learned to accept that best friend ships will stay as best friends and nothing more in canon, #and I've done so by not letting myself consider the possibility of it becoming canon, #so I never let myself consider Nuts and Dolts before volume 8
13 notes · See All
preciousgreenbeanText

Thinking about V7C6 when Ruby reached out to Penny after the rally massacre but stopped midway when she noticed she had Fiona’s blood on her hands. Thinking about how Penny looked at her scratched hands before returning Ruby’s hug in V8C3. The second event isn’t new, Penny already doubted herself in V2C3-4 while showing her scratched hands to Ruby. But what about Ruby’s bloodied hands…? V7C6 was the first occurrence… so whose blood will she have on her hands next?

#my post, #rwby, #nuts and dolts
7 notes · See All
5by5brittanaPhoto

I just think they’re in love.