Satan sweetie, do you even know how to put a jacket on?

Satan: What are they doing?

Mammon: Shh, the attitude is leaving their body.

Okay but imagine Lucifer telling Satan to make him coffee and Satan just gives him a whole cup of coffee beans instead.

Let’s not turn this beans thing into whatever happened to the crocs, alright? I don’t need my blog flooded with curse bean asks now-

Also I wanted to add a bookshelf, but I just couldn’t figure it out and just drew pages, the fact that drawing this me rage a bit is funny to me.

I don’t hate him though, I just hate most of his outfits. 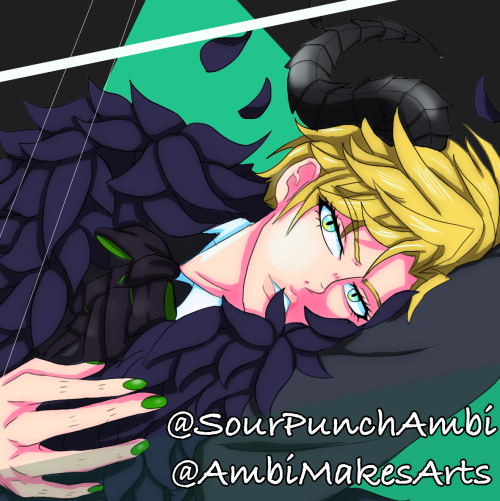 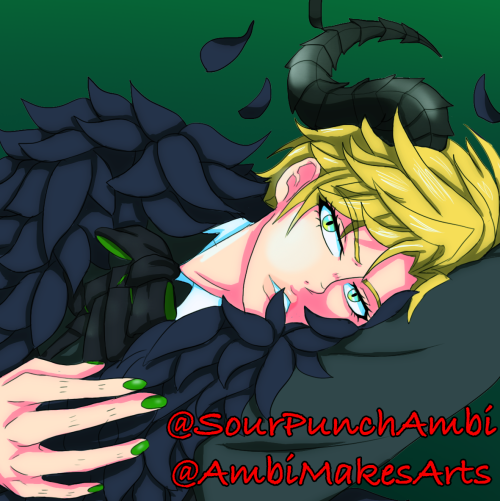 #obey me! satan#satan obey me#obey me!#this man can't dress who let him leave the house like this?#someone help him learn how to wear jackets and ties he does not know how to wear them
7 notes
xstrawberry-fizzx
Text

Satan, blushing: “Oh.. you were- You were talking to the cat. N-nevermind sorry”

MC, this time to Satan: “Hello to you too darling!”

They learn quickly that they’ve both been visiting this same spot to pet cats.

From then on, MC always greets him with a “My darling~”

It actually took a long time for MC to get his name because of this.

One time they run into each other at a nearby cafe and MC greets him as usual which makes his friends think he is dating MC.

Noticing the teasing, MC pulls him out to ask whether or not he’s uncomfortable with being called ‘darling’ since they will stop any time he asks.

They also include that if he changes his mind later he can still tell them because they respect his boundaries like that.

When Satan says “It’s okay… I don’t mind it.” he quickly regrets it because MC’s expression quickly turns into a smirk and they reply “Then does that mean you actually like it?”

From then on MC starts to use every endearment you can think of for Satan, including baby, angel, the love of my life, dear, honey, my love, precious and pretty.

No, they’re nOt dAtiNG

Their friends still think they are though.

And suddenly they’re running into each other very often? Were they always so close by and just hadn’t noticed?

Lol sike, Satan tries his best to match his schedule to fit MC’s and is hovering around in places they’ll likely to visit in hopes to see them.

He does it unconsciously, doesn’t even think he has a crush.

He’s not stalking them I swear.

Or maybe he is ?? idk, pick your own choice.

They’re both idiots. Yes, MC is flirting with him but they don’t think they actually like like him, it’s just for funsies.

Satan just likes being cherished by MC, he knows that every time he sees them his heart feels warm and he hasn’t given it any more thought than that.

One time Satan is sick (ofc I would include this trope), so MC goes to visit him and he just looks so cute and sleepy in his bed wearing cat PJs that before MC can think they reach out to kiss him.

You’d think that would help them resolve their feelings but no.

Satan ends up convincing himself that it meant nothing. Sure normal friends don’t kiss each other but their relationship has been very far from normal so something is like can happen.

MC still hasn’t rationalised it yet. Rather they’re asking themself why and trying to forget it, classifying it as one of the many cringe things they’ve done throughout their life.

Since it was a friend thing, Satan can reciprocate it, right?

So one day, MC is standing in Satan’s living room and out of nowhere, he grabs MC’s forearm pulling them towards him and leaves a chaste kiss on their cheek. Baby steps.

It is now MC’s turn to freak out and blush profusely.

And somehow, this becomes a norm. They often kiss each other casually. Always in the privacy of their own homes, never in front of others.

Over time, Satan gets used to it and becomes more confident in his actions.

What MC thought would be a nOrMal KiSs between fRiENds ends up with Satan licking their lips and going “tasty~” with a goddamned smile on his face.

MC doesn’t know what to make of it so they get angry.

Then they blame themself thinking they’re the one who first kissed him without asking him, so it’s okay, he just didn’t know, maybe he also did it without thinking.

I’m starting to think they’re intentionally avoiding thinking about feelings. Like, you can’t be that oblivious, right? I know I’m the one writing this but still…

If that wasn’t enough, one morning MC goes to Satan’s and find him sleeping on his bed. (they have each other’s keys, are we really surprised here?)

As they are about to leave the room, Satan grabs their wrist and asks them to stay. Of course, they oblige.

So here they are, sitting on Satan’s lap in his bed as he holds them while resting his head on their shoulder, still very sleepy. Did I mention he is not wearing a shirt?

They’re not sure how long they stayed that way but it felt like an eternity and not long enough both at once.

But it was long enough for them both to fall asleep in each other’s arms.

And so when MC wakes up, they find Satan’s arms wrapped around their waist. They stay like that for a while observing his face and playing with his hair.

Satan replies, still sleepy “I love you too.” as he holds them even tighter.

Afterwards, MC is worried because Satan was technically half asleep right?? Does it count? Does he even remember?

And Satan is worried that MC said they think.

Sure Satan only came to the revelation that he loves MC in that very moment but he has never been more sure of something than he is now. And they think they love him, it pisses him off.

So Satan is a little cold towards MC, and in return, MC thinks he doesn’t feel the same way and only said it since he was half-asleep.

So without any proper communication, MC starts to avoid him.

Now Satan is in panic. They said they loved him so why? He only gave them the cold shoulder for a bit, he didn’t even do or say anything mean!

He can’t take the suspense and rushes to their house.

MC opens the door at 2 am just to find a whiny Satan who jumps straight into their arms and softly requests them “Please don’t ignore me.”

The only thing MC can bring themself to say at that moment is “Okay… I won’t” as they pat his head.

They cuddle on MC’s bed that night. Any leftover conversation is saved for the morning… or maybe afternoon, once they are both sane and rested enough to convey their emotions properly.

The 7 brothers as MLP characters

Mammon- The great and powerful Trixie

Satan is mad at me for writing about Diavolo and now he won’t come home! I didn’t even want this UR! I just wanted a humble SSR. 60 vouchers gone. I’m gonna cry. =_=

i made some more, im getting back into the fandom with memes. 🖤🖤🖤🖤

It was well known around Devildom that Satan, the Avatar of Wrath, really had a thing for felines. In the past, he was known to have summoned literally thousands of cats at the House of Lamentation, leading to Lucifer’s ban on cats. His fascination led him to wanting to take care of any cats he could. So he began leaving out bowls of food to help feed the ones who lingered around the old house.

This ended up becoming a morning and nightly routine for him. Making sure that each bowl that was left outside of the house had the right amount of food and water, and of course sticking around to give the fluffballs some love before he headed back inside to sleep or out to the library. Occasionally he would find a few of the felines following him all over the city, but he was comforted by the fact that he had some company.

When you came to Devildom, he was excited to have someone to help him out with the small hoard of kitties that would get their morning and nightly food. That was, if you agreed to it of course. He had asked you to at least come with him once in the morning to see them. Satan was certain that they would all love you.

So that very first morning he woke you up early, delighted that he actually got to see your very cute resting face in the process. You looked peaceful sleeping the way you were, but he couldn’t just not let you see his favorite creatures. Carefully, he woke you, telling you that it was time to feed the precious tiny tamed beasts.

Right on cue when he walked out of the door with you and a bag of fresh food in hand, there were cats gathering around outside. Already excited, he carried the large bag of cat food with him as there were cats rubbing their tiny heads against his legs with pleas for food. There were plenty of meows and squeaks coming from the little beasts. It was truly a sight to see.

“MC? May you help collect some of the bowls I have set out so I can refill them wish fresh food?” He asked, smiling as he reached down to pet some of the beggars.

With a nod and a smile, you went around and collected some of the bowls, giving a few head pats to the soft floofs that continued to beg for your attention at your feet.

After Satan had started filling them, he handed the full ones to you to set out to separate some of the cats. Watching Satan’s joy was the best part of your morning. He looked so at peace, so happy to be helping these small feisty felines. He would sit down and enjoy the company of his furry companions, making sure not to leave any of them deprived of his affection.

It only took you just that one morning to really be hooked on helping him. As long as you were able to see his gleaming smile and hear his incredibly cute baby talk as he gave his affection to these lovable creatures.

From that day forward it became something that both you and Satan looked forward to, even if it meant getting up a little early to help out. Your bond with these creatures flourished just as his bond did with them. Every time you and Satan went somewhere together there were a few kitties that would tag along. You were never alone, you could always expect a friendly feline to be by your side.

I’m not sure if this is chaotic enough for you, but I hope you’ll still like it, anon! :)

MAMMON FINALLY CAME HOME. FOR THE MFKING FIRST TIME EVER, I AM CRYING

I’M JUST SO HAPPY HE IS HERE, THAT IS HOW MUCH I LOVE HIM 😤🥺

HE IS SO BEAUTIFUL

Will I get the animated cards? Probably not. But I did get the Satan and Asmo card. It made my night.

Ohh, of course i can!!I hope this is to your liking! Apologies for not answering this one early, because of the new Year i had been spending time with the fam, but here it is, even if its a few days late.

Trigger Warning: None, if you read any, please let me know so I can add them.

These are kind of short 😬 I’m sorry Nony. I hope you like it though!