Requests are open again!! Fill me up buttercups 💗 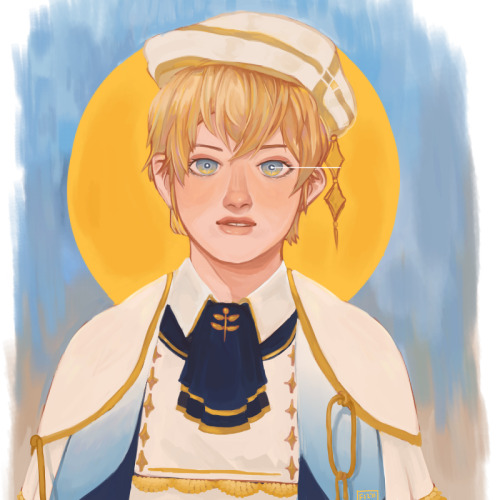 idk if someone has done this

- I’m torn with it being on his back or chest

- On his chest it would sit between his ribs and collarbone

- When clothed you can kind of see it over his collar

- On his back it almost fills the entire upper half

- Definitely on his chest

- similar to Lucifer it sits between his ribs and collarbone

- Thigh, shoulder, or the nape of his neck

- Yes the neck part is because of the MV

- It can hiss. Let me have this headcanon

- Hear me out, lower back

That or ankle but let me have this

- peaks over the waistband of his pants

- Definitely back or stomach

- Said “ouch” after and realized it wasn’t a bug

- The diamond in the middle glows red

- Back of the hand, nape of the neck, or directly in the center of his back

- Also moves but not from it’s spot, the two stems(?) on the sides flap like Beel’s

Diavolo tries to learn memes and slang in hopes that when he finally gets invited to hang out with someone, he can make friends

And sometimes he’ll just say random slang when around the demon brothers to sound funny, even if it makes no sense to them. Leaving them shocked and confused

This man is a saint being the second most powerful brother and dealing with the taunts of literally everyone in the Devildom. If and when he goes apeshit no one could stop him or be too shocked to and I don’t think I’m ready for that. There had to be some sort of event to make him the second most powerful, and now that I’ve posed the idea i’m too afraid to even think of what could’ve happened.

I AM SO FUCKING PRESSED!

MY FIRST LUST UR IS THIS SMARMY SONUVA BITCH!

YOU DONT UNDERSTAND HOW MUCH I JOKED ABOUT HOW THIS CARD SPECIFICALLY WOULD BECOME MY FIRST LUST UR. AS SOME SICK JOKE. BECAUSE I DON’T HAVE ANY BELPHIE URs AT ALL!

(PS edit). I’m sorry to all the Solomon stans who would love to have this card and would be more appreciated in your hands. I’m just upset I got him before Belphegor, through sheer dumb gacha luck in a free pull.

Check this post I made a week ago to this.

#i have been extremely lucky lately though#i did pull the new Diavolos twice in one 10 pull#but that luck has been in sacrifice of Belphie cards!#obey me#obey me! shall we date
13 notes
blokked
Text

Me, staring at Cerberus: …I want to pet him.

Me: I know he’d like, rip my head off and use me as a chew toy, but he’s so cute. He’s just a giant dog. Have you ever seen a tibetan mastiff? Same thing.

Levi: This is just like that one manga “I met a sorcerer who was pretending to be my long lost sibling after they supposedly went into battle and was never to be seen again, but was discovered in a secret village far off the coast and-“

Me: What the fuck kind of genre are you into

Lucifer, for the twelfth time: I suggest you remember your place before sticking your nose in other people’s business.

Me: Let’s do it baby I know the law

Me: Do demons and angels like, reproduce? I know that angels can be born from a human dying and entering the celestial realm but like, did all demons fall from grace or is it reproductive

Satan: Please leave my room, this is the third time you’ve asked the question.

Me: Can you at least answer the question I had earlier about demon genetalia I’m really curious

(I’d think of more but my brain is tired)

That was my free pull! I’m shocked I just used up all my luck i‘ve ever had in this game

When Luci tries helping Levi with his confidence…

*MC and Levi having their first born child*

Levi: *snatches the newborn up*

Levi: *Yeets baby into a pool*

*baby struggles at first but starts swimming around*

Levi: How else are they gonna learn how to swim!? It’s better for them to learn now! *Jumps into pool with baby*

So I’m back with youu guessed it! Another art style 😂

It was only a matter of time before I did this. And honestly? I don’t regret it.

So I made a Tsundere/Yandere-looking Levi. 🙃

This first chapter is about MC’s practice. It’s kind of important since I decided they’re going to be working with Luci and Levi! So it will give you a little insight on how they got along before getting to the Devildom 💕 ALSO! Luci and Levi do not know MC as… uh, MC. They know them by a magickal name, which you are free to choose (your favorite nickname, a name you wish you had… go wild) so, when writing “MN”, please insert your preferred name there instead of the one you’d insert when reading “MC”!

— Could I just get a straightforward answer for ONCE?? —you huffed, rubbing your tired eyes as an attempt to comprehend the message your tarot cards were giving you.

You had been into witchcraft ever since you could remember. Collecting crystals since you were a child, always loving incense, having a natural connection to nature and the wildlife… it just seemed to be in your bloodstream. And as you grew up, your practice finally followed a path. Demonology and deity work soon were a part of your day to day.

Being the most well known pantheon, at first you sticked only to Greek deities, them guiding you on how to perfect aspects of your practice. Apollo was a very important helper for your divination abilities, and if it wasn’t for his help you probably would’ve given up on divination methods a long time ago. Eventually, you were confident enough to expand your horizons and decided that working with demons could be worth it.

After drowning yourself in a lot of research, you started noticing unusual signs around you. However, it didn’t take you too long to get to the conclusion of who was trying to get your attention. Apparently, you and your practice had caught Lucifer’s eye. And as time passed and you two started to establish a steady relationship, another powerful energy seemed to want your attention too.

Before you realized, Leviathan and Lucifer were playing a very important role in your life.

— MN, are you even listening to me? Go take a rest now. —Lucifer’s deep voice rang deep down in your brain.

You gulped and felt a shiver run down your spine. You were not a seer, but you definitely could feel when they wanted you to know something, and sometimes hear them.

— Yes, mom… —you said jokingly, but yelped as soon as you felt the energy in your room thicken. The flame of the candle you had for him was dancing angrily.— Leviathan isn’t that grumpy… seems like you had a rough day, Lucifer

A sigh escaped your lips as you finally put out the candles and walked up to your bed, allowing your tired body to drift off to sleep.

What was going on? You opened your eyes and suddenly everything around you was unfamiliar, were you in another astral travel? No, that wasn’t it. Who were these men looking at you? Why did…?

— Welcome to the Devildom, MC.

MC is a [modern] witch: a series