Y’all know the amulet of Mara

Well imagine Mc gets one and wears it around

And as soon as Levi sees it on them

My kind of ship dynamic lol 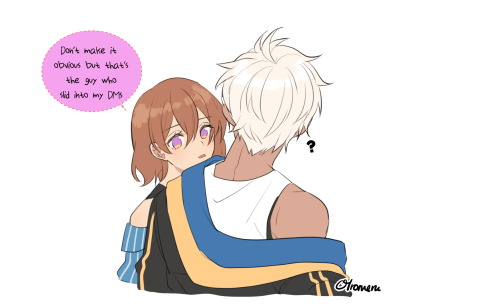 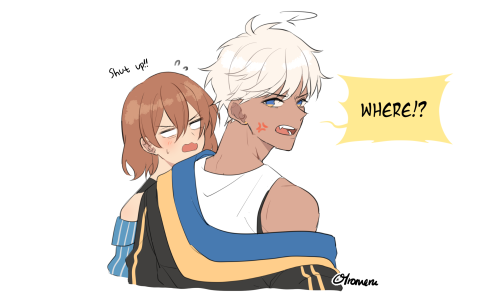 So I saw this on twitter and tumblr and I wanted to hop on to it! It’s a fun little thing!

The Mc here is Valery, she/they. I’m romancing Mammon in my playthrough because he is a sweet baby boi and I do not take any criticism at this time X3

It’s fun to represent the relationships of everyone like this!

Leviathan: You call yourself my soulmate, but where were you when my meme only had 4 likes?

MC: How many hours have you slept, this week?

I made some starting sheets for the 3 designs and named them! C (Danielle) was most popular among tumblr, Twitter and Instagram so she’ll be my primary Mc. These aren’t set in stone as I’m still trying to develop them, so these will probably change.

Here’s the blank template (not made by me):

You know how concenered my non om! Playing friends are when I tell them I’m trying to romance demoms and summon cards on a ouija board😕

2nd-year Solomon had lost his pen and he was searching for it.

1st-year MC saw it… but the rascal didn’t bother to find who the owner was even though the name “Solomon” was already marked on the pen.

When Solomon finally visited the room MC was in, he saw MC nibbling on the pen. And this dude fell for them because a cutie nibbling his pen? Yeah. That’s fucking destiny for him.

MC: Lucifer, can I have your hand?

Lucifer: *narrows his eyes at them* No.

Lucifer: … Fine. *gives them his hand*

Lucifer: *shivers* *yank his hand back* What the-

MC: Depends on the kiss.

MC: Do you want me to eat your tongue?

Luke: *crying* That nasty demon has been bullying me.

Luke: *sees the demon* That’s him!

MC: *smiles* I’ll be back in a jiffy. *goes to the demon and drags them somewhere*

MC: *goes back at him after a few minutes* *with something red on their lips and neck*

MC: Ahh… Well, he told me that he will never bother you again since he’s going to move tomorrow. *smiles*

Lucifer: Make sure you’re on time or I’ll slit your throats hahahhahahaha.

MC: You don’t have to fake laugh, we know you’re serious.

Barbatos: *is sleeping on MC’s bed*

Lucifer: So… What exactly happened?

MC: I kissed him.

Asmo: Lucifer, your question is wrong. MC, how did you kiss Barbatos? *smiles*

Beel: I’m the one who taught them so I supposed it was just a simple kiss. Right, MC?

Beel: What do you mean?

Asmo: *starts laughing* Let me guess. You did French kiss on Barbatos!

MC: … Because that’s what written on the note Beel gave to me.

Beel: You’re dead to me, Asmo.

Lucifer: Anyway, that means Barbatos should be fine. He will wake up.

Lucifer: Diavolo, what are you smiling at?

Diavolo: Well, I have a good news.

Diavolo: MC, we don’t really need to have a uterus to get pregnant.

Levi: Lol, Like Lucifer when it comes to Satan.

Mammon: Wait… If Barbatos is pregnant with MC’s child… Does that mean… He’s our brother-in-law?

Lucifer: … Mammon. You really never fail to give me a nightmarish thought.

Diavolo’s father: How have you been my grandchild?

MC: Well, I’m surprisingly fine. How about you, my dear grandfather? When did you decide to wake up from your deep slumber?

Diavolo’s father: *chuckles* When I heard the news about you, I immediately have the urge to meet you, my grandchild.

MC: *frowns at him* You’re being too friendly, aren’t we?

Diavolo’s father: MC, I hope you won’t be too harsh to your father.

MC: Right. Coming from someone who neglected him for so long.

Diavolo: Father, are you done talking with MC?

Diavolo: *smiles at MC* MC, come with me. I have already found the cartoon that you like.

Diavolo: *laughs* Yes, I am. You must see Barbatos scream whenever he sees Jerry on the screen.

Levi: Beel, maybe we can give them even just one?

Beel: No. It’s bad for their teeth.

Beel: *gives him a warning look*

Levi: Huh? Do you want me to hug you?

Beel: You know I’m going to beat you up later, right?

Levi: *flower background* I don’t care. It’s totally worth it.

Solomon and Simeon: *who are in the same room as them*

Simeon: *goes to check under their beds and behind the windows* Good. No demons. *laughs with a hint of irritation* Guess you have to bear with us tonight.

P.S. I decided to combine things that are not quite compatible 🤭 Because I am fan of the Disenchantment Netflix series and this is what I got!

MC: You are all so handsome that my eye is hurting with brightness.

The boys: Aww~ Thank yo—

MC: *pops their glass eye* There… Much better.

#obey me#obey me mc#obey me boys#mc with a glass eye#ask answered
97 notes
mahglassowl
Conversation
Mammon
If ya think about it...
Satan
I swear, if you say something idiotic I'm gonna-
Mammon
the phrase "I ain't never seen two pretty best friends" doesn't technically imply the hotness and cuteness levels of the two best friends.
MC
So... Two pretty best friends may not exist, but the concept of a hot best friend and a cute best friend does?
Mammon
*points index finger at MC* Exactly!
Satan
What is life
#obey me#obey me!#obey me mammon#obey me satan#obey me shall we date#obey me mc#obey me headcanon
62 notes
hoiimkawaii
Text

Kaho in her RAD uniform 🥺😳